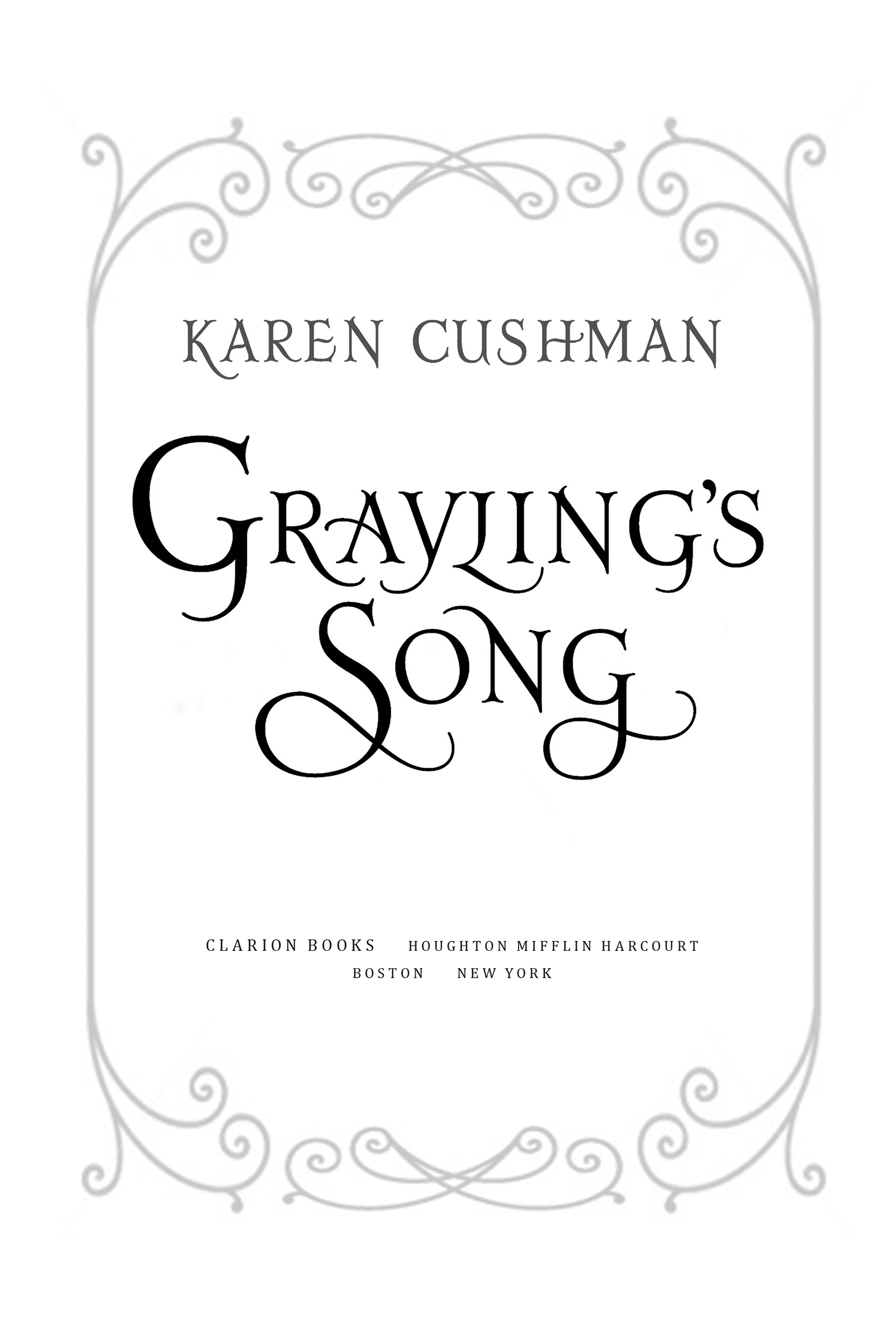 For the greathearted young woman who is my own daughter, Leah, and for Robbie Cranch, the closest to a hedge witch that the twenty-first century has.

It is not down in any map; 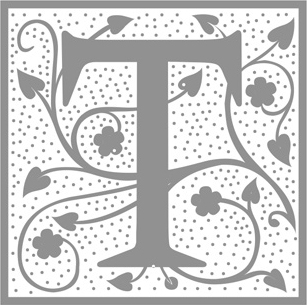 he mist hung low
in the valley between the forest and the town. It dangled from tree branches like stockings on a washing line and curled around Grayling's head as she weeded and hoed and raked, readying the herb garden for its winter rest. When her basket was filledâangelica and agrimony, rosemary and the remains of the dillâshe put her shoes on again, for she had been gathering the last of the summer herbs with her feet bare, as was proper. She stood still for a moment, letting mist settle on her shoulders like a damp cloak, and listened to the quiet.

Finally, picking up the basket, she headed home. The steeply roofed cottage of wattle and yellow-tinted daub sat in a bit of a clearing, shaded by an ancient apple tree. Its round-topped door of rowan wood was crisscrossed by iron bands against the evil designs of demons, ghosts, and ill-wishers of all sorts. Brass bells hung from the eaves, a swag of hazel rods and garlic festooned the little window, and smoke poured from the smoke hole in the roof. Grayling smiled to see it, as she always did. Despite her mother's endless tasks, the cottage meant comfort, safety, seclusion.

The day was mild enough for them to have the window open. Grayling could hear her mother singing while she crushed dried wormwood and nettle for a healing ointment. Her mother, Hannah Strong, wise woman and healer, helped those she could in exchange for a ham or a wool coat or the mending of a pot. How much was magic, how much learning, and how much common sense, Hannah Strong never said, but most people left satisfied.

“I have settled the herb garden,” Grayling said.

“Have you gathered the herbs as I bid you?”

“Did you pull out any bindweed or thistle?”

“Come in, then, and stir the marsh-mallow root bubbling in the kettle, and don't be letting it burn while you laze. Young George Potter suffers from a clenching of the bowels and needs a tonic.”

Grayling nodded and entered the cottage.

“Thomas Middleton will be coming anon with his son Gabe, who suffers from boils. While I lance and clean them, you will watch over Thomas's youngest, for his mother lies abed with melancholy.”

“Aye, I will.” Grayling clumped her way to the kettle hanging over the fire. “If you say I will, I will,” she muttered. “You know I will.
Of course
I will. I always do.” When Thomas and his boys arrived, Grayling, as she was accustomed, slipped into the corner, and the little boy dozed on her lap.

Grayling mostly avoided those who came for her mother's remedies, charms, and tonics. Greeting folks meant speaking up, and Grayling thought her mother spoke enough for both of them. And the girl learned many things by listening when visitors forgot she was there. Margery Atwood wanted a love charm to woo the miller's son away from Cecily Waterstone. Ralph Farquhar had a rash shaped like a turnip on his bum. Randall Pike's pig found its way into Wellington Baker's yard and cooking pot, so Randall Pike perched on Wellington's doorstep and wouldn't move until he was paid for the pig. Randall's wife brought him bread and beer each day at noon, and he voided his bladder in a door-side gooseberry patch.

William Miller had a vision of soldiers marching on the road north of town, and Hannah Strong believed it likely a true sighting, portending conflict, for the land was in turmoil. “Warlords are forming their own armies,” she said with a frown. “The powerful want more power, the wealthy want more wealth, and heaven help those who get in their way.”

“Aye,” said Thomas Middleton. “Them what has, gets, and the rest of us make do with turnips.”

“Leastwise,” said Hannah Strong with a quick slice at a boil on Gabe's shoulder, “you have turnips, and a home and bed, so you have no need to go to edge dwelling.”

“Aye,” repeated Thomas Middleton. “I seen them, bullies living rough and menacing them passing by. I say tae you, summat wicked be in the kingdom.”

Grayling's skin prickled with unease. There were some things she would rather not have heard.

Next morning, mist again sheltered the valley. Grayling sat cross-legged on the edge of the pond, humming as she scoured the kettle. She thought about dinner. They still had parsnips and carrots in the ground, and perhaps there were enough apples left for an apple tart. With cream, if only they had cream. She licked her lips.

“Grayling, come. Attend me now!” Her mother's voice. The calling mingled with the croaking of frogs in the pond and the
ting-tang
of dewdrops, and it sounded to Grayling like a sort of music.

“Grayling, come at once, or I shall turn you into a toad!” her mother shouted again, much louder.
Belike she would if she could,
Grayling thought.
By borage and bryony, I can do but one thing at a time. Why can she not do whatever it is herself and leave me be?
Hidden as she was in the mist in the herb garden, Grayling could think such things, even though she could not imagine saying them.

She clambered to her feet, left the kettle to soak in the pond, and filled a basket with the remaining watercress and mint that grew at the water's edge. Finally, swinging her basket at her side, she turned for the cottage and her mother.

The mist was clearing elsewhere, but the cottage was still obscured. Grayling drew closer. Everything was the same, yet somehow different. There was the steeply roofed cottage of wattle and yellow-tinted daub. Brass bells still hung from the eaves, and a swag of hazel rods and garlic yet festooned the little window. Smoke poured from the smoke hole in the roof and .Â .Â . that was it. Not mist but smoke shrouded the cottage! Too much smoke! Suddenly the roof thatch exploded into flames.

What had happened? Where was Hannah Strong? “Mother!” Grayling screamed. The flames chewed at the little house, but she darted forward. The terrible roaring of the fire hurt her ears, and the heat forced her back. “Madam, my mother!” she screamed again. “Where be you? Answer me!”

“Cease your clamoring, Grayling,” Hannah Strong said. “I be right here.” The voice was low and hoarse, belike from the shouting and the smoke, but her mother's voice nonetheless. Grayling turned. Her mother stood at the edge of the clearing.

Grayling stumbled over and grabbed her hand. “What has happened? Come, run, before the fire finds the trees and we are lost!” She tugged at her mother's hand. The woman swayed like a sapling in a strong wind but neither followed Grayling nor toppled over. She stood straight and strong and still.

Still?
Grayling's mother was never still. She was all color, bustle, and fuss, wrapped in crimsons and blues and the gold of the mustard paste served with sausages at the Unicorn's Horn. There came a quivering in Grayling's chest as if a flock of the grayling butterflies for which she was named were imprisoned there, and her face grew cold with fear.

“Why do you stand here, Hannah Strong?” she asked, her voice atremble. “Why do you not move? Come away with me, do!”

“Witless child, open your eyes and look,” her mother said, pulling her hand away and gesturing toward her feet. They were rooted into the earth. What had been toes were now spreading roots, and what had been soft skin was as rough and brown as a tree trunk.

“Oh, monstrous!” Grayling said in a rough whisper. She dropped to the ground and clawed at the bark on her mother's feet. “Who did this? And why?”

Hannah Strong put her hand on Grayling's shoulder. “Enough, enough. 'Twill do no good.” She shook her head, and dark hair fell across her face. “I know not the who or the why. Destruction came as smoke and shadow, fired the house, and left me as you see me.”

“What are we to do?” Grayling cried over the pounding of her heart.

Her mother shook her head again.

Grayling stood and wiped her hands on her skirt. She could not move for terror and barely breathed as she watched the progress of the flames. Her mother did not know. Her motherâwise woman, hedge witch, purveyor of potions to heal and to cheer; who had charms and spells and power; who was the wisest and surest and strongest person Grayling could imagineâdid not know. Grayling felt a clenching in her belly and in her heart, and her hands shook.

No sound reached her ears but for the roaring of the fireâno twittering of birds, no chatter of squirrels or hooting of owls, no singing of the frogs by the pond. The flames finally took the cottage and the apple tree beside but went no farther.

After a time, what remained had cooled enough for Grayling to draw closer. The roof was gone, she saw, and the walls, though standing in some places, were burned through in others. She took a hawthorn stick to protect against evil and poked in the char and the ashes. Her mother's clay jars, pots, and crocks of salves and potions were buried in ash. Some were broken, their contents spilled. Others were whole, dingy with soot, and still warm to the touch. Cooking pots were blackened, candlesticks melted into pools of tin. The two chairs by the hearth were gone, as were the beams heavy with drying herbs and the spinning wheel in the corner.

Nightstruck by Jenna Black
Perilous Pranks (Renaissance Faire Mystery) by Lavene, Joyce, Lavene, Jim
The Electrical Experience by Frank Moorhouse
The Spirit Heir by Kaitlyn Davis
Convictions by Maureen McKade
True Colors by Thea Harrison
Desafío by Alyson Noel
When Ratboy Lived Next Door by Chris Woodworth
Rules to Rock By by Josh Farrar
Jack in the Green by Diane Capri
Our partner