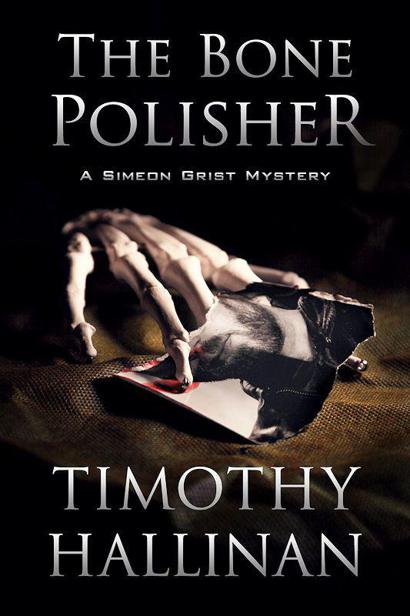 “Hallinan has a genuine ability.”

“Hallinan writes with humor and insight
into the Los Angeles scene.
He has a good eye for detail and
accurately sketches all the scary shadows
of nighttime Hollywood.“

“Hallinan captures the little idiosyncracies,
the most mundane familial interactions,
and infuses them with a depth of meaning
not usually found in the crime genre.
He even manages to do so with a
sly grin and a loopy sense of humor…
Do yourself a favor and read it!”

“Creepy… Screamingly funny…
A snappy thriller… The only question
that remains unanswered is whether success
will spoil Timothy Hallinan.
With
THE BONE POLISHER
, it’s only
a matter of time before we find out.”

“A suspenseful mystery… a tale of
love and death in LA with plenty of bone-
crunching action, humor, eerie violence,
and an intelligent assessment of why
people do the deranged deeds they do.”

Copyright © 1995 by Timothy Hallinan Published by arrangement with the author

All rights reserved, which includes the right to reproduce this book or portions thereof in any form whatsoever except as provided by the U.S. Copyright Law.

Digital edition by eBooks by Barb for
booknook.biz

For more than a year, I debated making
The Bone Polisher
available as an ebook.

More than the other books in the Simeon Grist series, it describes a world that has changed somewhat radically since the story was written. In the period in which the book is set, Acquired Immune Deficiency Syndrome was nearly always fatal, and it was raging like a firestorm through the gay community. Also, back in those days, gay people were even more marginalized than they are now—which was, of course, one reason the medical community took so long to get on the right track about the disease's causes. And it was also the reason that outing someone, which is part of the book's plot, was a more devastating thing, in many cases, than it is now.

These days, someone like the character Christopher Nordine wouldn't necessarily be looking at a death sentence. At the time the book was written, though, it was almost as certain as the sun coming up in the east.

I wrote this story in the first place because I was arrested for drunk driving. As part of my penalty, the judge sentenced me to several months in Alcoholics Anonymous. This curdled my blood. I was certain I wasn't an alcoholic, and when I thought of Alcoholics Anonymous, I imagined dingy rooms with curling linoleum floors in which a bunch of unshaven, toothless men in raincoats chain-smoked and gummed uninteresting confessions at each other. Sort of like film noir, but eleven hours long and without a plot.

But that was not to be. I lived above the Sunset Strip in West Hollywood, and West Hollywood even then had a demographically anomalous number of gay people. My local meeting was in a church at Fountain and Fairfax. When I walked into that room for the first time, I was expecting a budget production of “The Lower Depths,” but what I got was more like the moment in “The Wizard of Oz” when Dorothy opens the door to reveal that Oz is in color.

The room was full of the best-looking group of men I'd ever seen, although some of them were painfully thin. It soon became apparent that quite a few of them were there because they were determined to die sober, and others had come so they could live their last year or so in clarity. I saw more grace and courage in that first hour than I'd ever seen in such a concentrated period in my entire life.

And I both cried and laughed myself silly, in that meeting and the meetings that followed. I made dozens of friends. I learned that I was, in fact, an alcoholic, and that I was in good company. I've never had a drink since, and it saddens me to know that so many of the guys who helped me are gone now.

When I started
The Bone Polisher
, I was thinking of them. Because, since I'm straight, I felt unqualified to write about gay life from the inside, yet another gay man—also HIV-positive—was kind enough to read it and show me where I was screwing it up. I'd thank him here, but he's gone, too.

Finally, the character of Max is based on a real individual, a former actor-turned-spiritual adviser, who was a great friend and source of support to my wife during a difficult period in her life, and for many years thereafter. He died at a ripe age of nothing but a long, rich life, and we've both missed him ever since.

One thing I like about the book as I read it now—and it was noted by several reviewers—is that Simeon is feeling his age and has acquired a healthy fear of the people he has to face. He probably should have felt that way earlier in the series. Anyway, it's an element of the book that pleased me when I proofed the ebook conversion. And I notice that reasonable fear has been a component of both Poke Rafferty and Junior Bender since I began to write them.

Hope you enjoy
The Bone Polisher.

I have never liked anyone at first sight.

ONE ~
Everybody Loved Max

14 ~
The Hall of the Mountain King

You know the sheriff has his problems, too,
and he will surely take them out on you.

The farm boy looked no more than seventeen as he bent over the table. He had hair the color of corn.

Dearest Max
, he wrote. Then he leaned back and fished a package of cigarettes out of his shirt pocket and lit one. With the cigarette in his mouth, he looked older.

The room was just a room, one in a series of rooms. If he’d closed his eyes he couldn’t have said what color the walls were. The low table, with its stack of white paper, was the only piece of furniture. The Farm Boy was sitting on the floor.

Thank you for writing me such sweet letters. I really can’t tell you how much they mean to me, here in this wilderness. Just to know there is someone I can talk to. After all these years, even though I’m only seventeen
.

He tapped ash from the cigarette onto the floor and laid the butt on the table, the coal hanging over the edge. The table was striped with burns, long worms of dark wood. Without thinking, he ran his fingernail down one of them. His nails were long and well kept, and he scraped charred wood beneath the nail.

“Shit,” he said, staring at the nail. Then he scrubbed it clean on the carpet and picked up the pen again.

Do you remember Nester in the story of the Trojan War? He guided the young men, gave them his wisdom before

He glanced at the book that lay on the floor beside him and swore softly, then scratched out
Nester
and wrote
Nestor
above it, and continued where he had left off:

they went into battle. That’s what I hope you will do for me. Prepare me for the battle to come. I’m not sure I have the strength or wisdom to pre

He closed his eyes for a moment, and then wrote:

Please, Max, write me again soon. You don’t need to send me the photo you promised. Your words tell me all I need to know about you. You are good and kind. It doesn’t matter how old you are
.

I want to come to you, but first I want you to write me again and tell me what kind of boy you really want. Tell me everything. If I am not right for you, I don’t want to push myself into your life. I need your help, but I don’t want to hurt you. If I think I can be good for you, I’ll call to see if you can send me money for the ticket to Los Angeles you promised me. It costs $650, and cash would be best. I am enclosing the gift I promised so I can recognize you at the airport. It belonged to the uncle I told you about, the only one who understood
.

He laid down the pen and picked up two silvery metallic objects, which he clinked in the palm of his hand like small change. He dropped them to the wooden surface, beside the letter. Then he took another puff from the cigarette and put it back on the edge of the desk.