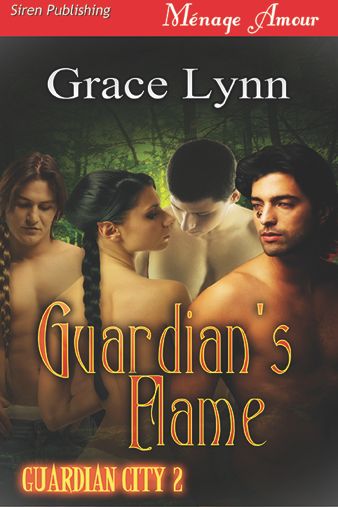 High Prince Demend, an Elf and changeling, and his mate Nathan Summers are doing their best to run the Guardian City. With the pair trying to keep Demend from dying from his own magic and a summons from the Higher Council, the newly mated couple is in over their heads.

Jason Johnson is a Phoenix with a serious problem. He’s a phoenix trapped as a dog, living on the fringe of the Guardian City. His mates live in the city, but fear prevents him from going to them. Can he figure out a way to let his mates see him as he really is, instead of the dog he was forced to become?

Zoey is a Dark Elf, trapped in a cell within an Incubi trading Post. She is a trained warrior and has tried everything to get herself free, but nothing seems to work. Can she escape the clutches of the Incubi, or will she be stuck forever as a POW?

If you have purchased this copy of
Guardian's Flame
by Grace Lynn from BookStrand.com or its official distributors, thank you. Also, thank you for not sharing your copy of this book.

This is Grace Lynn’s livelihood. It’s fair and simple. Please respect Ms. Lynn’s right to earn a living from her work.

Thank you for reading me all those books when I was a child.

The porcupine scuttled away from Jason’s still form with a sense of pride. Jason couldn’t argue that he had lost the battle against the needled terrorist. Hunger drove him to the brink of insanity, and the porcupine was the only creature he could manage to catch. That was only because he previously lost a fight with a rabbit and a bear. The bear hadn’t been his fault, but it was because of the rabbit. The rabbit looked like such an easy catch, but apparently Hopper decided to prove to his buddies he could kick a dog around and then run away. Jason hadn’t given up after taking a butt full of fur and a foot to the face. Instead, he decided to run down Peter Cottontail. The rabbit had other ideas, and led them both straight past a mother bear with babies. Jason barely limped away from that battle and didn’t get a bite to eat, except a mouthful of fur. He would be picking fur out of his teeth from the cottontail for weeks.

He wasn’t accustomed to this form, even though he had lived as a dog for so long he barely remembered the feel of the wind against his parchment-paper wings. Living in the wild had become a learning experience, and more than once he’d considered crawling back into the Elvin City. He just wasn’t sure how to handle being around people and both his mates. Mates that didn’t know him, that didn’t even acknowledge him beyond some poor mangled mutt that should be pitied. If he had a pittance of pride left, he would try to at least catch a decent meal. Instead, he considered how pathetic he would look crawling back to his mates, begging for scraps from people’s homes.

He wasn’t even completely sure when his life had spiraled toward this fate. It was sometime between ex number one and ex number two. Both of those had left him feeling used, and his heart shattered from the delusion of the people he had thought they were. Well, actually, it had ended completely with ex number two, but it had started before he had even met ex number two. Number two had been charming at first, sweet even. He held doors open, and though Jason had never been into dating only males, there was something about the man that had called to him. Now, as he lay on the forest floor with needles sticking out of his face, Jason had to admit he had fallen into a hole too deep to climb out of. He used his paw to try and work the needles out, but only succeeded in pushing them deeper into his skin, and he yelped at the pain.

Clint had been a jerk in the end. Leaving Jason flying from the man’s controlling habits, fearing for his life from the man’s fists. He had finally landed in a midsize city, in a shelter with other homeless people. He had worked so hard to blend in with the humans, even going as far as getting a job washing dishes. He had saved up his first two paychecks and rented an apartment in a seedy building in a bad neighborhood. For a while, things went as planned. He had saved every dime he could, but in the end no amount of money could save him. Clint had broken into his apartment with a creature that had to be related to the devil. Clint had wrapped his hands around Jason’s neck, and as the lights faded away Jason knew he was dead. Instead, he woke up as a mangy mutt, tied in a kitchen surrounded by Werewolves that liked to kick him.

Jason had tried everything to escape, but the chain that held him to the wall wouldn’t budge. To make matters worse, he had to stand by and watch his mates pass by him. They were kind to him. The smaller one even scratched his head. Jason had almost lost his mind at the feel of those delicate fingers scratching the fleas that wouldn’t relent in their attack. It was only when the kinder Werewolves came and removed him that he finally saw a light at the end of the tunnel. They had even allowed him to feel the wind in his face as they rode a Dragon to bring them all here. Jason had missed the feel of the wind, and the Phoenix inside wanted nothing more than to shift. But every time he called, the Phoenix couldn’t answer. The bird in him had given up its fight, resigned to live as a dog.

He honestly had no idea how long he had been chained to the wall, but it seemed like an eternity. He was grateful the kinder Werewolves had allowed him to go free. He had a feeling that it had been his mates that had a hand in that. Even though he was free, his soul was still locked within its prison, and he wanted nothing more than to curl inside his mate’s arms. He had tried to eat things, but the only nourishment he had managed were bugs, until he happened upon the rabbit. The rabbit wasn’t worth the effort. He had planned on sneaking back to the city to watch his mates, but the hunger was driving him to continue hunting. He could search around the city for anything thrown out, and at the same time see his mates. Jason didn’t want his two strong mates to see him starving and bleeding, so he would have to stay out of sight.

With his mind made up, Jason forced his battered body to obey his command. He stood on his shaky four legs, and slowly limped toward the sounds of the city. He stopped and munched on anything his nose said was eatable, cringing with each crunch. It took him longer than he thought to reach the outskirts of the bubbling city, since he had to stop and rest more and more often. He fell down at the fringe of the foliage and slung his head on his paws in comfort. His legs refused to move, and Jason agreed that rest was the only way to gain any strength to continue on. He only needed to sleep for a bit, but as he struggled to keep his eyes partly open, he knew he wouldn’t wake. His eyes closed of their own accord, and Jason drifted off as air became harder to come by.

Zoey glared at the wall in her cell, waiting for the guard to drop off her daily lunch of slop. She wasn’t sure what all was in it, with the exception of meat that made her sick. She needed all the energy she could get, as her time was ticking slowly by. Pretty soon, the Incubi would tire of the games and would put her up as a prize in one of their nightly pleasure games. That would leave her going home with whoever won that night’s round. Zoey kicked the wall in frustration.

The walls had long ago faded from whatever paint had been put on the concrete. Spider-web cracks spiraled across the wall in a pattern that seemed to hold the universe’s secrets. When it rained, precious water would drip through the cracks, offering little dewdrops of life. Zoey waited for those downpours, stealing an extra drink whenever she could. It didn’t make her living arrangements any more comfortable. The rain would slowly ease down the walls, and sit in pools on the concrete slab that posed as a bed in the small cell. Only when the water reached the small drain did it disappear. It also served as her toilet.

The slot on the door slid open, skidding a bowl of what once was soup in the cell. Zoey hopped toward the disgusting mixture, drinking every ounce of the liquid that came three times a day. She picked through the remains, eating only the vegetables. It only took a few minutes to eat the measly meal, and she pushed the bowl back toward the slot. Normally she kept the bowl and made them come in and get it. Today, she didn’t feel up to the fight. She crawled onto the slab of concrete, curling into a ball. She counted slowly to herself, picking up where she had left off before she had allowed herself to rant.