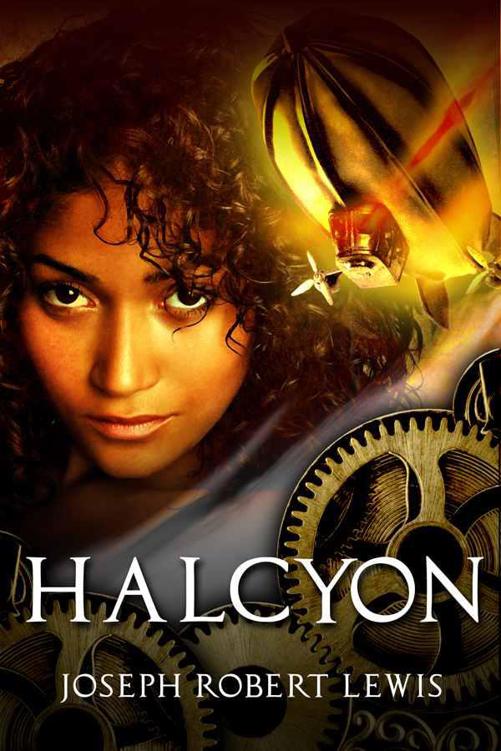 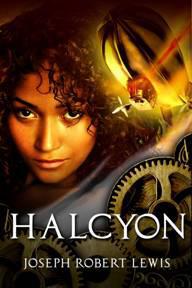 This is a work of fiction. Names, characters, places, and incidents either are products of the author’s imagination or are used fictitiously. Any resemblance to actual events, locales, or persons, living or dead, is entirely coincidental.

All rights reserved. No part of this publication can be reproduced or transmitted in any form or by any means without permission in writing from Joseph Robert Lewis.

For Stephanie and Julia

With special thanks to Nina, Joan, Randy, and Aimee

A note about The Other Earth series

This is a work of historical fantasy. Some of this world may be familiar to you.

But in this world, Europe never emerged from the last Ice Age and only the southern regions are habitable. North Africa is cool, wet, and fertile. Ancient nations such as the Persian Empire have persisted, though others, such as the Romans, never rose to power. Some of the countries in this world reflect the cultures and attitudes of the Renaissance while others reflect the Industrial Age. Historical figures appear, though they too may be different from the ones you have known.

And while this world is separate and unique from our own, it generally resembles our world in the sixteenth century in some ways.

Don’t expect this world to conform to the history that you know. The people and places are different. The climate and wildlife are different.

Even death is different here.

Titles in the Other Earth series

Chimera #1: The Dragon and the Lotus

Chimera #2: The City of the Gods

Book One:
The Burning Sky 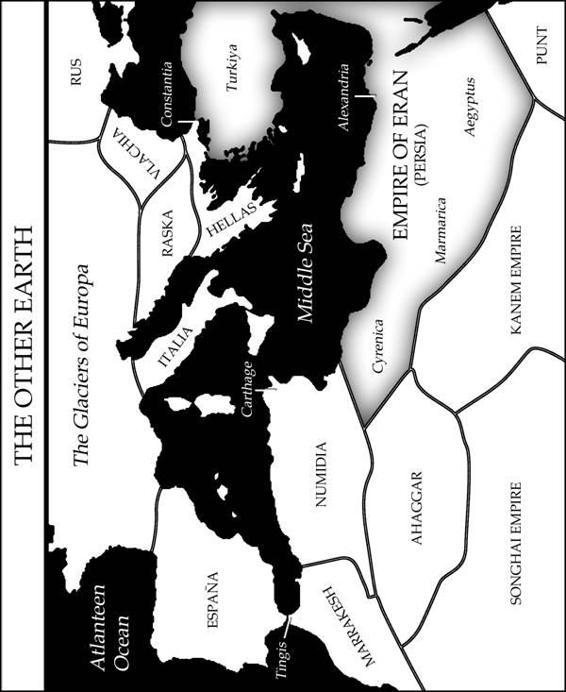 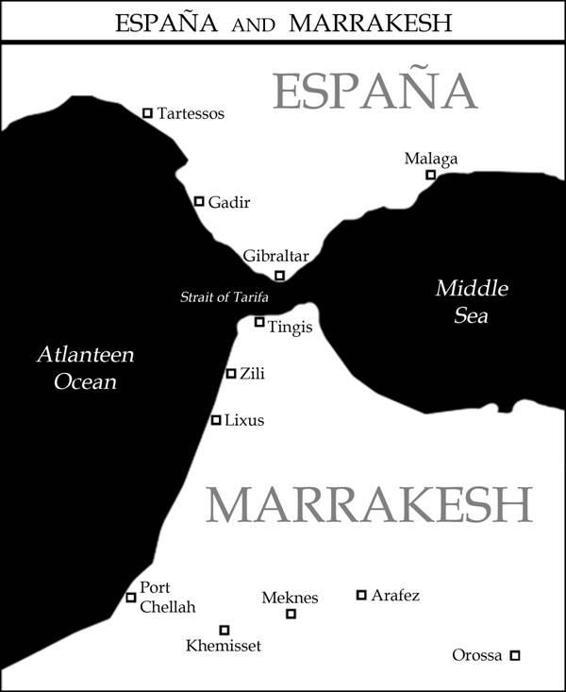 “Once more around the Middle Sea!” Taziri swept up her tiny daughter and carried her around the dining room, through the kitchen, and back again. Menna giggled and waved her chubby arms. After several minutes of dashing around the house, Taziri gently crashed her baby onto a pile of cushions in the corner of the dining room. “And back home to Marrakesh!” Taziri groaned as she straightened up and rubbed her back. “She’s getting heavy.”

Yuba finished setting the table. “You always say that when you come back. You know, she’ll be walking soon,” he said quietly.

“Time flies.” She stroked Menna’s cheek.
Time flies, Menna grows, and you, Yuba, what about you?
What’s happening to you?
His once glorious mane was gone, shaved during her last trip as yet another surprise to come home to. They were all doing that now, everywhere she went. The men were changing. Some things were small, like the shaved heads. Other things were more troubling, like their missing veils.

Yuba paused in the doorway. “I went by the university again this morning. My work is backing up. Trees to move, gardens to plant, and a new fountain to build. They asked when I’ll be back full time, again, but I think they’re just going to replace me soon.”

Taziri sighed.
Please, Yuba. Just one evening together as a family without an argument
. She said, “I told you, as long as I’m a flight officer, I don’t get to decide my schedule. I’m sorry, but you might just have to let that job go, at least until Menna’s older.”

As Yuba came back into the dining room with the steaming tajine, a booming detonation thundered through the house. Plates and glasses crashed to the floor. Lights flickered. Neighbors screamed. Taziri held her baby girl close to her chest as she knelt down under the dining room table. The ground shuddered again. “Yuba, down here!”

He ducked down beside her and together they huddled around their crying child, listening to the muffled sounds of frightened children and frantic parents in nearby houses. After a moment, Yuba leaned back and surveyed the room, one hand absently stroking his daughter’s hair. “I think it stopped.”

Taziri ran to the front door and looked outside. Uphill to her right she saw townhouses huddled close to the street, their pale brick faces painted red by the setting sun. Spidery cracks lined most of the windows and many nervous faces poked out through open doorways. Above the homes rose the temple and the slender towers of the governor’s mansion gazing out over the city of Tingis. Downhill to her left, Taziri saw the evening sky filling with black smoke rising from the long arching hangars beside the railway station.

“It’s the airships!” Taziri dashed back into the house and knelt by her husband. “Are you all right? Yes? Let me see her. She seems fine. Just let me look at her. I think she’s fine. Right, Yuba, listen, I need to get down there. If the fire spreads…”

“Just let me get this.” She grabbed the bottom half of a broken glass and began gathering up the smaller shards into it.

“You’re sure?” She set the glass on the table.

“Yes.” He stood, their teary-eyed baby on his hip. He cleared his throat and she thought he was going to say something, but then he frowned and turned away. “Go do what you need to do. We’re fine here.”

She kissed them both. “I love you.”

“I know.” Yuba carried Menna back to the bedroom.

Taziri snatched her jacket from its hook by the door and struggled into it as she bolted down the stone-paved street, her steel-toed boots pounding out the rhythm of her strides. She passed men in blue shirts and women in red and green dresses standing in doorways, all gazing down the hill at the angry blaze vomiting a column of smoke into the sky. Some people moved slowly down the street, some even jogged after Taziri, but none kept pace with her.

At the next intersection, she dashed around a motionless trolley filled with gawkers. The electric cables overhead hummed their last faint hums of the evening as the sun vanished, taking their power with it. A tired old siren wailed in the distance and somewhere behind her a bell was ringing. More people were standing in the road now shouting about water and hoses, arguing about pumps and buckets. She ran past them all.

Houses gave way to shops, which gave way to warehouses. Rooftops covered in solar sheets and heavy wires glinted dully in the fading light, and windmills of all shapes and sizes rattled and creaked as they choked on winds laced with smoke and peppered with ash. She almost didn’t see the two homeless men lying in the shadows near an alleyway entrance, and she vaulted over them to avoid tripping and falling. Taziri ran faster, she ran until her lungs burned and her legs burned, and then she was through the gates of the airfield where the air itself burned, clawing at her throat and stinging her eyes.

The field danced with yellow and white flames that rippled and roared as the cool sea breezes swept up the hillside. To her left, the shapes of the train station platform and clock tower stood black against the purpling sky. Smoke and steam billowed ever upward all around her while glowing cinders fluttered down over the grassy field, swirling on the hot winds. Slowing to a walk, Taziri yanked her flight cap from the strap on her shoulder, pulled the padded headgear tight over her head, and wound her dangling blue scarf across her mouth and nose. She lowered the circular lenses of her flight goggles over her eyes and scanned the area. “Hello! Is there anyone here? Hello!”

Three massive hangars stood before her, built wall to wall. The flames and smoke danced and growled somewhere farther down the row, perhaps on the second or third building. As she entered the first hangar, Taziri plunged into a darkness broken only by the dull orange glow prying through the cracks in the wall, bleeding around the windows and doorframes. Even in the shadows, she could clearly see every line and curve of her airship
Halcyon
filling the chamber. For a moment she paused, staring up at the long gas envelope above and feeling the waves of heat rolling through the hangar.

“Ma’am?” She turned with a start to see a woman wearing an aviator’s orange jacket and goggles identical to her own. Taziri had barely heard her over the growling and roaring of the fire. “Captain?”

“You got here fast.” Isoke Geroubi pushed her goggles up to her forehead. “What happened?”

“Maybe it’s the
Crake
?” Taziri pointed to the door to the next hangar and they both approached it cautiously as the sounds of falling debris echoed beyond the wall. “No, it’s probably the
Grebe
. They were due in at sunset. Something must have happened when they landed. A crash. Look, the sprinklers aren’t working! And the fire brigade is taking its damn time. Where’s the ground crew? We need to keep the fire from spreading in here. If we open the hangar doors to cool the chamber, the wind could fan the flames. But once the temperature of the air in here gets high enough, the seals on the
Halcyon
’s envelope will crack apart anyway and then, well, boom.”

Isoke grinned. “You engineers are all pessimists, you know that?”

In the distance, something metallic keened and crashed to the ground.

“Yes, ma’am. I suppose you just want to fly
Halcyon
out of here?” Taziri coughed into her scarf. “I wish you could, but no one could control an airship with all this heat and wind, not even you.”