Read Half a Life: A Memoir Online

Half a Life: A Memoir 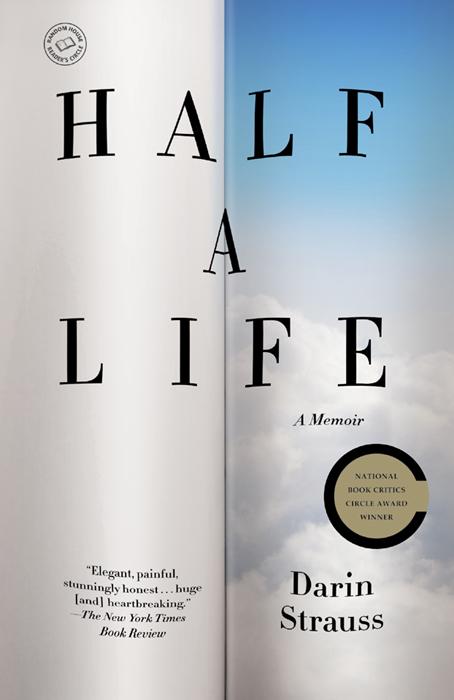 Chang and Eng
The Real McCoy
More Than It Hurts You 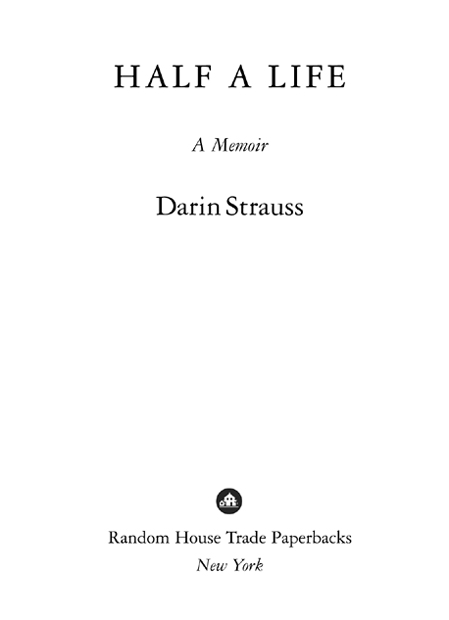 Published in the United States by
Random House Trade Paperbacks,
an imprint of The Random House Publishing Group,
a division of Random House, Inc., New York.

Originally published in hardcover in the United States by McSweeney’s in 2010.

For my parents, and hers
.

An Essay by Darin Strauss

A Conversation with Darin Strauss

“By the time you’ve run your mind through it a hundred times, relentlessly worked out every tic of your terror, it’s lost its power over you … [Soon it’s] a story on a page, or, more precisely, everybody’s story on a page.”

Half my life ago, I killed a girl.

I had just turned eighteen, and when you drive in new post-adolescence, you drive with friends. We were headed to shoot a few rounds of putt-putt. It was May 1988. The breeze did its open-window work on the hair behind my neck and ears. We had a month before high-school graduation. I was at the wheel. Up ahead, on the right shoulder, a pair of tiny bicyclists bent over their handlebars. The horizon was just my town’s modest skyline done in watercolors. We all shared a four-lane road; the bicycles traveled in the same direction as my car. Bare legs pedaling under a long sky. I think I fiddled with the radio. Hey what song is this? So turn it up. Then one of the bike riders did something. I remember only that—a glitch on the right. My Oldsmobile stayed in the far left lane. After a wobble or two, the bicyclist eased a wheel into the road, maybe thirty feet away. My tires lapped up the distance that separated us.

Next the bicycle made a crisp turn into the left lane and my sudden car. Dark blond hair appeared very clearly in my windshield. I remember a kind of mechanical curiosity about why this was happening and what it might mean.

This moment has been, for all my life, a kind of shadowy giant. I’m able, tick by tick, to remember each second before it. Radio; friends; thoughts of mini-golf, another thought of maybe just going to the beach; the distance between car and bicycle closing: anything could still happen. But I am powerless to see what comes next; the moment raises a shoulder, lowers its head, and slumps away.

And then it’s too late. My forearm hooks to protect my eyes. The front-seat passenger shouts. I picture my foot disappearing under the dash, kicking down for the brake, straining farther than any real leg can go. Yet the hood of my Oldsmobile met Celine Zilke at forty miles an hour. Her head cracked the windshield. I remember the yellow reflector from her spokes, a useless spark, kicking up the glass incline and over the roof.

Celine Zilke, the girl I killed, was sixteen and always will be sixteen. And I knew her: Celine went to my school. She was an eleventh-grader. I see her playing field hockey in blue gym shorts—Celine had been that lively, athletic type one always imagines in shorts. Or I see her settled in beside friends on the concrete benches just outside the cafeteria, or dashing off notes in the public-speaking class we took together. Celine sat by the window.

When I look back now, she strikes me most of all as young.

I walked to where Celine lay on the road. I didn’t know who I’d hit or even that we’d had a serious collision. I thought in terms of broken arms and getting in trouble with my parents. Then I reached her and noticed the peculiar stillness of her face. This stillness transformed her—I didn’t even recognize her. The eyes were open, but her gaze seemed to extend only an inch or so. This openness that does not project out is the image I have of death: everything present, nothing there. She lay on the warm macadam in oblique angles—arm bent up and out, foot settled under a knee. In the skin between her eyebrows there was a small, imprinted purple horseshoe of blood.

“I think maybe she’s hurt,” said my friend Dave. We couldn’t tell if there was any life coming from her pale, parted mouth.
Maybe she’s hurt
might pass for an obvious statement when you read it now, but it didn’t as we stood over Celine on that morning. Her face looked relaxed, as if she were lost in thought. Yet I could feel my own breathing speed up. And that’s all I felt.

I must have managed to ask how Celine was doing, because at some point a policeman told me that she was unconscious but holding on. I remember talk of cardiac arrest, of a medevac helicopter coming to take her to the hospital. I had a somewhat thickheaded sensation that everyone was responding appropriately to what was clearly a crisis. But I still didn’t think there was any reason to freak out. This was something fixable; it was
being
fixed. Still, I had been careful not to stand anyplace where I could see Celine again—her face’s semblance of musing calm, her unnatural position.

Police had suspended traffic on the highway’s two sides. My friends made cameo appearances as standers, mullers, back rubbers. I thought how strange it was that, in normal life, we all touched so rarely. Traffic, I now understood—I’d started to think abstractly—is a kind of stream crowded with fish, a rush of momentum, and we’d been yanked to the side of the brook and forced to dry in
the sun. I’d become one of those sights I’d driven past a hundred times on the expressway, the locus of a thousand strangers’ curiosity.

That’s the thing about shock. You can have these clear and selfish perceptions, as you circle without looking at the truth lying alone on the street.

The most embarrassing memory of that day came when two teenage girls materialized from one of the stopped cars nearby. I heard the thunk of doors closing. And next the young women came walking over the grass. They were sexy and not from my school. Both wore shorts and white sleeveless undershirts; one smelled, optimistically, of suntan oil.

“Hey,” she said. “You in that crash?”—her voice a mix of apprehension and prying.

Having acknowledged my own centrality and drama, and sensing the girls were still watching, I dropped to my knees and covered my head with my hands—fingers between the ears and temples, like a man who’s just won the US Open. This plagiarized “emotional” reaction, acted out for girls I’d never see again, is one more stomach-turning fact of that afternoon.

“Aww,” the girls said, coming over to me. “You know it wasn’t your fault.”

I didn’t even nod—I just got up and showboated away from them, shoulders back; I went over to the bustle around Celine, the bustle from which these girls were excluded. I can only explain it like this: there was still a disconnect between me and the realness of what was happening.

I’ve come to see our central nervous system as a kind of vintage switchboard, all thick foam wires and old-fashioned plugs. The circuitry isn’t properly equipped; after a surplus of emotional information the system overloads, the circuit breaks, the board runs dark. That’s what shock is.

My father arrived. Someone must have called him, though this was before cell phones. It was the sight of my dad that day, the clean sadness on his face, that turned this real, finally. All this had happened to me; I had done this; I was his son. Dad was somehow like a new circuit in the fuse box. He arrived, emotion could flow. In his hug I went out all at once into tears, as I never had before and haven’t since.

I don’t remember how long we’d all been there, whether I’d gone to look at Celine’s excessively pale face again. (A psychologist later told me such memory skips have been installed for our own protection. Trauma makes a spark that in a white glow washes out details, guilt, shame—a flare that throws the recent past into shadow and deep obscurity.)

A policeman shambled over. His eyes glided across my face; he asked me clipped questions. How fast had I been going? Had I been drinking? (
About forty, I guess
, and
No, no. Jesus, no
.) Someone, perhaps a new EMS arrival, finally took charge. All right, folks—step
back
. He decided on the best way to transport Celine. The how of his plan escaped me, and still does. But an ambulance did wheel in and get Celine, finally and somehow, away from all the stopped cars. They took her to the hospital. And my passengers Mike
and Jeff—twin friends who’d been in the backseat—also managed to get out of there. And then, after the traffic was unjammed; after the police told me I was “free to go”; and with a suddenness and ease out of sync with the scale of what was happening—it seemed a form of insanity to touch the car again—my dad just slipped into the driver’s seat. Dave took Dad’s car, I fell into mine beside my father, and we were off. I sat in the front passenger seat. A crack in the car’s windshield measured the length of the glass. Sunlight caught in tendrils that raked out from its sides.

My parents, after offering the quiet-voiced inevitables, told me not to beat myself up about it.

I don’t remember what Dave and I did the rest of that afternoon. I certainly didn’t phone Celine’s family. She and I hadn’t known each other—not well enough, or really much at all—and so I was too afraid to phone, or even to look up the Zilkes in the white pages.

“You should go to a movie,” my parents told me, trying their best.

A benign suggestion, maybe, but I didn’t want to be
seen
trying to enjoy myself. Judging by the EMS workers’ concerned brows, I was afraid Celine might actually die. She could already be dead. I didn’t want to appear capable of any emotion but remorse—so I traveled to a theater in some other town. I must have believed that keeping up a picture of constant remorse was the same, morally, as living in constant remorse. That night, Dave and I drove down near the county line to see
Stand and Deliver
.