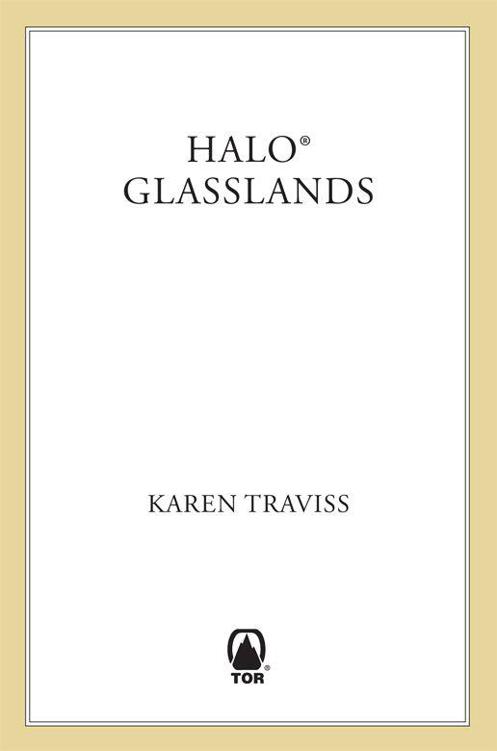 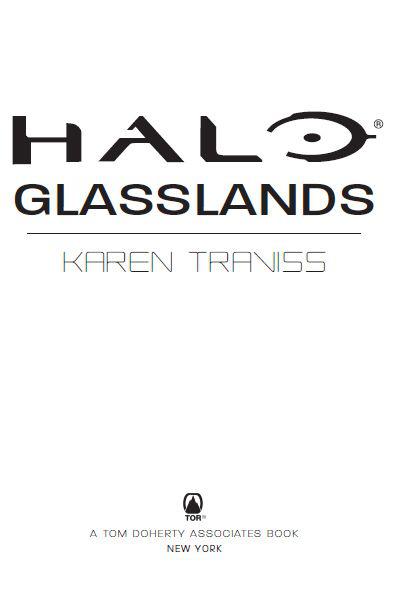 For my mother, who never found out how it ended

My grateful thanks go to Frank O’Connor, franchise development director for Halo, and Kevin Grace, franchise manager for Halo, of 343 Industries, for being cool and always available for spitballing; Jim Gilmer, for unstinting moral support; Sam Burns, for telling me way back that writing AIs would be right up my street; Mary Fil Pletsch, Canada’s ambassador to Sanghelios; Jerry Holkins and Mike Krahulik of Penny Arcade, for being good mates to me in trying times; and the Rooster Teeth team, for giving me the most fun I’ve ever had without being arrested or popping a vertebra. Blarg!

None of this would have been possible without the amazing efforts of the Microsoft staffers, including: Ben Cammarano, Christine Finch, Kevin Grace, Tyler Jeffers, Tiffany O’Brien, Frank O’Connor, Jeremy Patenaude, Corrinne Robinson, Eddie Smith, and Kiki Wolfkill.

It’s a beautiful sunny day. The oak branches are swaying gently in the breeze and the air’s scented with unseen blossom.

Did you ever run and hide as a kid? Ever slam the closet door behind you, giggling because you were sure you’d never be found, and then realize you’d locked yourself in? Did you panic or breathe a sigh of relief? I suppose it all depends on what you were hiding
from.

We’re hiding from the end of the world.

For all we know, it’s already happened. If there’s anyone left out there, they don’t even know we’re here. We may be the last sentient life left in the galaxy—me, Chief Mendez, and a detachment of Spartans. Correction: three of my Spartans—Fred, Kelly, and Linda—and five others who are something else entirely, five I didn’t even know existed until this week, and if there’s one thing I can’t stand, it’s
not knowing.

You’ll explain yourself to me, Chief. I’ve got all the time in the world now. I’ve got more time than I know what to do with.

Mendez takes something out of his pants pocket and gazes wistfully at it like a pilgrim with a holy relic before putting it back.

“You can read Forerunner, Dr. Halsey,” he says, impassive. We’re still ignoring the elephant looming over us at the moment, neither of us saying what’s really on our minds. He has his secrets, and I have mine. “Do you know the symbol for
pantry
? That would be handy right about now.”

He’s staring up at a sun that can’t possibly be there, set in an artificial sky that runs from summer blue at one horizon to starless midnight at the other. We’re not on Onyx any longer—not in this dimension, anyway.

“Chief, this is the most advanced doomsday bunker ever built.” I’m not sure who I’m trying to reassure, him or me. “A civilization sufficiently advanced to build a bomb shelter the size of Earth’s orbit wouldn’t forget to address the food supply. Would they?”

It’s a permanently lovely day inside this Dyson sphere, and beyond its walls is … actually, I don’t know any longer. It
was
Onyx. Now it’s somewhere in slipspace. Every time I think I have the measure of the Forerunners’ technology, something else pops up and confounds me. They must have shared our sense of beauty or bequeathed us theirs, because they made this environment idyllically rural; trees, grass, rivers, almost landscaped perfection.

Mendez pats his pocket as if checking something is still in there. “Better hope they evolved beyond the usual procurement charlie-foxtrot, too, then. Or we’ll have to live off the land.”

Mendez has known me a damned long time. Over the years he’s perfected that hoary old CPO’s carefully blank expression that looks almost like deference.
Almost.
It’s actually disgust. I know that now. I can see it.

But you’re in no position to lecture me on ethics, are you, Chief? I know what you’ve done. The proof’s right in front of me here. I’m looking at them.

Mendez walks away in the direction of the two recon teams waiting under the oak trees. The Spartans—my protégés and Ackerson’s little project, these Spartan-IIIs—look impatient to get on with something useful. They don’t handle idleness well. We made warfare the sole focus of their lives.

Now we don’t know if there’s still a war outside to fight, or even a galaxy left to fight it in.

But that’s fine by me. My Spartans are safe here. That’s all that matters. Safe if the Halo Array fires, anyway. I don’t know if this is the haven it appears. Perhaps it’s already got tenants. We’ll find out the Navy way, Mendez says.

“Okay, Spartans, the camp’s secured, so let’s shake out and see what’s in the neighborhood.” Mendez unslings his rifle and looks at Fred. “Conserve rations until we know if there’s anything on the menu here. Right, sir?”

“Right, Chief. Radio check, people.” Fred, Spartan-104, has been made a lieutenant at the ripe old age of forty-one. “Priorities, in this order—secure the area, locate a food supply, and find a way to revive Team Katana and the others.”

How many Spartan-IIIs did Ackerson create? Five are already in suspension here, with three other men we can’t identify, but we have no idea yet how to open their Forerunner slipspace pods. They’ll have an interesting story to tell when we do.

Fred gestures to take in the terrain. “Treat this as an acquaint. Spartan-Twos familiarize themselves with Spartan-Threes so that when we get out of here, we’re ready to fight effectively. Kelly, Dr. Halsey, Tom, Olivia—you’re with Chief Mendez. Linda, Lucy, Mark, Ash—with me. Move out.”

Just as Fred turns to walk away, I catch his eye. He was never much good at burying his feelings, but he can’t hide them from me anyway. I know all my Spartans better than their mothers ever did. He shuts his eyes tightly as if he’s blocking out an unbearable world, just a fraction of a second, and then it’s gone. We’ve buried our dead here. Two of those Spartan-IIIs, just into their teens, just
children
… and Kurt never made it into the sphere.

I thought you were dead already, Kurt. Now I’ve lost you twice.

Fred pats Lucy on the shoulder. “You okay, Spartan?”

She gives him a distracted nod. She’s a disturbing little scrap of a thing, too traumatized to speak. Mendez trained these kids. He
knew.
He knew what Ackerson was doing with my research. He was part of this all along.

And I won’t forget that, Chief.

Kelly slows and drops back to walk beside me. I’m not twenty-one anymore and I certainly don’t have the stride of a two-meter Spartan, or even these … new ones. My God, they’re
too small.
How can they be Spartans?

“You’ve fallen on your feet again, Dr. Halsey,” Kelly says. “Some rabbit hole. Did you know it was here?”

“I should stop trying to look as if I know everything, shouldn’t I?”

“You think we’re going to lose this war. I know we’re not.”

“I extrapolate from known facts. But I don’t mind being wrong sometimes.”

How far would I go to save my Spartans?
This
far. I lured them to Onyx, the safest location I could think of, because I knew they’d never abandon their posts any other way. I lied to them to save them.

And they’re all that stands between me and damnation. I’ve done terrible things—monstrous things, criminal things—that were necessary, but I did it
to them.
Kidnapped them as children. Experimented on them. Altered them terribly. Killed half of them. Made them into soldiers with no life outside the UNSC.

It had to be done, but now I have to do
this.

There’s no god waiting to judge us when we die. This is our heaven or hell, the here and now, the pain or the fond memories we leave behind with the living. But I don’t want the forgiveness of society, or Mendez, or even to forgive myself.

I just want to do what’s right for these men and women, whose lives I
used.
Theirs is the only forgiveness that can absolve me.

Kelly—tall, confident, nothing like the victim I feel I’ve made her—points into the distance. I’m starting to forget we’re trapped in a sphere in the folds of another dimension, because my brain’s getting used to telling me benign lies. I stare across a sea of trees at two elegant honey-gold structures protruding above the canopy some kilometers away.

“That’s impressive, Doctor,” she says. “Hey, Chief, what do you think they are?”

“Better be the chow hall.” Mendez keeps scanning the trees as if he’s still expecting to run into trouble. “Or a way out of here. Don’t forget there’ll still be a hell of a mess to clear up when we get out.”

He’s right. Won or lost, wars never end cleanly. I think we’ve lost already. If the Covenant doesn’t overrun the galaxy then this life-form they call the Flood will, or the Halo Array will fire and wipe out all sentient life. But if we win—

Even if we win, the galaxy will still be a dangerous, desperate place.

I wonder where John is now. And Cortana. And … Miranda.

See, Miranda? I didn’t forget you. Did I?

A GOD WHO CREATES TOOLS IS STILL A GOD. IT IS NOT FOR US TO IMPOSE QUALIFICATIONS UPON THE DIVINE OR PRESUME TO GUESS ITS INTENTIONS.