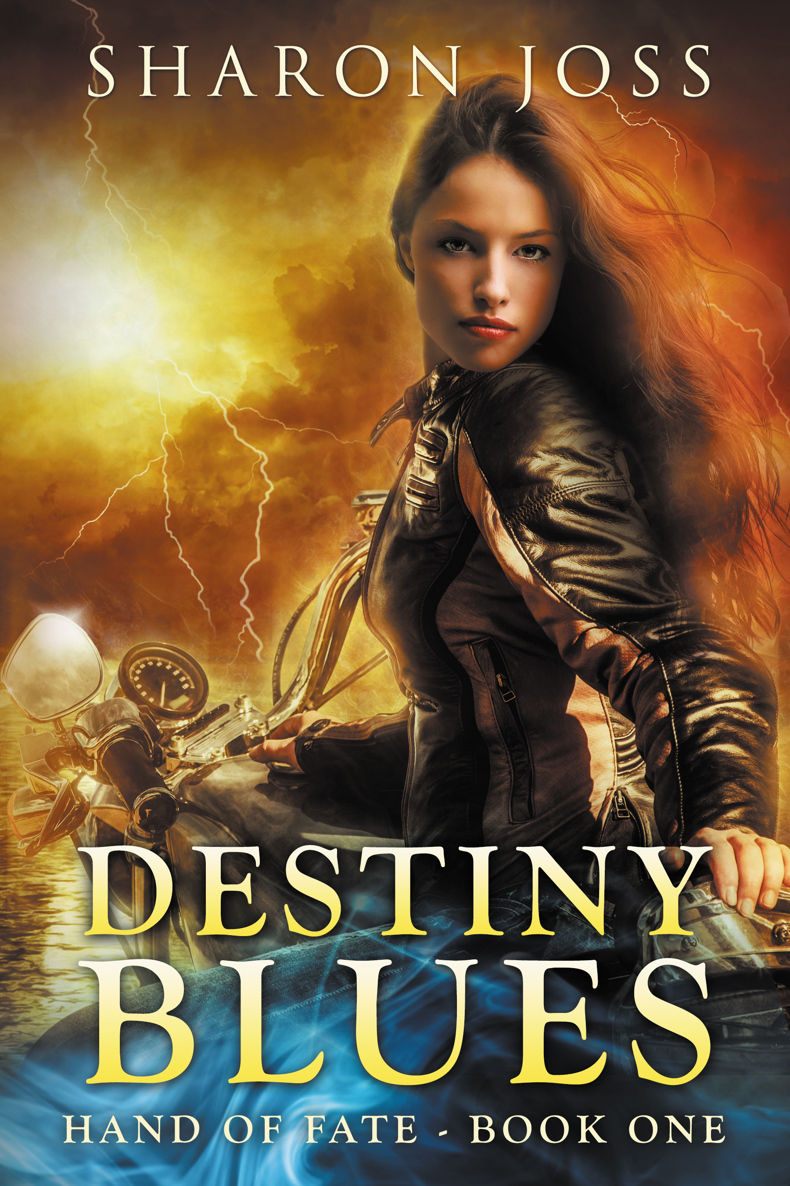 All rights reserved.  This is a work of fiction.  All characters and events portrayed in this book are fictional, and any similarity to real persons, living or dead, or incidents or events is coincidental and not intended by the author.  This book, or parts thereof, may not be reproduced, distributed, or transmitted in any form or by any means, or stored in a database or retrieval system, without prior written permission of the author.

Please do not participate in or encourage piracy of copyrighted materials in violation of the author’s rights.  Purchase only authorized editions.

It was a stretch, but I just managed to slide the parking citation beneath the wiper blade of the white Freightliner refrigerator truck. I’d never had to crawl across the hood of such a big-assed truck to issue a parking ticket before. I half-fell, half-jumped to the ground, and dusted the grime off the front of my uniform.

“Give him another one, Miss Mattie,” Mr. Yousef insisted. The truck was parked directly in front of Mr. Yousef’s Paradise Garden Cafe, taking up three parking spots, which Mr. Yousef liked to think of as reserved for his customers. “Give him two more! He’s ruining my business!”

He was right, of course; I should write two more tickets.  But I wasn’t altogether certain that Mr. Yousef wasn’t trying to get another look up my culottes while I sprawled across the hood of that truck again.  I’d barely started my shift, and I was already dirty and sweaty.  Upstate New York is especially humid in July, and beneath my helmet it was like a sauna.

“How long has the truck been parked here?”

He flapped his apron; his chin jutted toward at me like a bulldog’s. “It was here when I arrived at six this morning. That’s five hours without paying! I am certain it was parked there all night. Why you won’t tow it? What are you waiting for?”

Mr. Yousef was usually such a jovial man; I’d never known him to be this agitated. The Paradise Garden Café was a popular spot for lunch in Picston. They served the best Greek-Middle-Eastern-North-African food in town. Most of the crew from Parking Control were regular customers. His home-made Koshari in particular was legendary. I sure didn’t want to upset him any further.

I walked around the truck again, looking for an oil leak or problems with the tires, but couldn’t spot anything obvious. The truck was in rough shape. A couple of gashes appeared to have compromised the insulation, and there was a lot of rust. The refrigeration unit wasn’t working. The rank aroma of rancid meat was already beginning to overwhelm the good smells emanating from the café. I could see Mr. Yousef’s point.

“He’s got twelve hours to move the truck. If it’s still here tomorrow, we can do something then.”

I began to fill out the second ticket. I should have filled out all three citations from the get go; that way, I’d only have had to crawl over that stinking truck once.

“Wait!  Please, miss; I’ve got the money right here.” The parking violator jogged toward me; jaywalking across the street from the Buzztown Café.

The guy in the summer linen suit was blonde, tanned, and fit. No socks. He looked like he belonged behind the wheel of a sleek Italian sports car. He flashed me a mouthful of the most perfect set of chompers I’d ever seen, and slammed a quarter into the meter. No kidding, this guy could have been in toothpaste commercial.

No way he was the driver of this beat-up hulk.

He glanced at my nametag. “Officer Blackman. Does the “M” stand for merciful, by any chance?”

I blushed; glad for my helmet and mirrored shades.  I recognized him.

I didn’t exactly know him, but I’d seen him at my gym. Older guy, maybe early forties, but in great shape. As in, really great shape. Underneath that business suit, lurked the broad-shouldered body of a gymnast. I’d been trying to catch his eye for weeks, but this wasn’t how I’d imagined our first meeting. I hoped he wouldn’t recognize me, parking control officer uniforms being what they are. My formerly crisp white shirt and navy culottes were already damp with perspiration, not to mention truck grease.

The odor of rotted meat wafted over me. He’d probably already lost the whole shipment. A couple of fifteen dollar parking tickets would be the least of his worries. Somehow the suit and the meat truck didn’t seem to go together.

“This your vehicle, sir?”

He glanced up the street. “Ah, I’m helping out a friend. The truck conked out early this morning and he left to get another. He asked me to come and wait for the tow.” He held up a Styrofoam coffee cup. “I stopped for a coffee; didn’t realize the time. This is my fault, officer. Please don’t write that ticket. The tow guy said he’s on his way.”

Up close, he was even better looking.  I echoed his grin, with interest.

Mr. Yousef flapped his apron and glared at me.

Focus, Mattie
. Technically, I was obligated to write three tickets, but with a tow truck on the way, maybe a little leniency was in order.

I nodded my head to the ticket on the front windshield. “I’ve already issued the first citation, sir. But I’ll give your friend a break on the others this time.” I gave him my best professional smile. “I hope your friend doesn’t lose all that meat,”

He gave me a quizzical look. “What meat?”

“Isn’t that what’s inside the truck?”

“No, pretty lady. It’s flowers. From the flower market. Tear up that ticket, and I’ll give you a whole armful.”

I rolled my eyes. What a flirt. Maybe I liked him better from a distance. “No thank you.” I recognized the truck coming up the street and waved to the driver, Chad, who worked for my brother.  “Here’s your tow. You have a nice day, sir.”

I left Mr. Wonderful and Chad to their business, nodded to Mr. Yousef, and walked back to where I’d left my scooter. The distinctive smell of rotten meat and licorice seemed to trail after me. Flowers my ass. It didn’t take a detective to know he was lying through his teeth. I told myself it wasn’t my concern.

Don’t get me wrong, most of the time; Parking Control is a good gig. It’s just that sometimes my Scooby detective hormone goes into overdrive. I have to remind myself that I’m not paid to investigate; I’m paid to write tickets. Then again, maybe it wasn’t the detective hormone at all. I hadn’t even kissed a man in six months.

With my thoughts still so preoccupied by Mr. Wonderful, I didn’t notice my three-wheeled scooter until I was practically standing next to it. I stopped in my tracks and stared at the transparent apparition seated just behind the driver’s seat.

It was no larger than a three-week-old kitten; grey-brown and hairless, with yellow bulbous eyes and a face like a gargoyle.

The bottom fell out of my stomach. Suddenly, the extra-strength dose of putridity in the air made sense.  I groaned. They call it teratosis, or, ‘breath of the demon’. That was no cat. That was an un-materialized demon. And somehow, he’d attached himself to me.

My left eyelid began to twitch. Not only did this thing smell bad enough to strip the chrome off a hubcap, but it’s stare gave me the creeps. I’d never actually seen one before, but along with all her other problems, my mother had been plagued by a series of demon spirits for most of her inebriated and abbreviated life. Or
djemons
, as they’re called, before they materialize. Her doctors thought they contributed to her mental decline and eventual suicide.

Of course everybody knows Shore Haven, New York is the spirit capital of the northeast. Located some forty miles east of Rochester, along the lake Ontario shoreline, the neighboring towns of Picston and Shore Haven sprawl around the base of Sentinel Hill, one of North America’s few demon portals. Legend has it that a horde of djemons were imprisoned beneath the hill in ancient times, and that the local Senequois tribal magic keeps them there.  Every once in a while, though, one of them gets out and attaches itself to a human. They’re invisible to everyone but their new host at first, but readily identifiable by their ugly appearance, glowing yellow eyes, and putrid smell.

I glanced around, but nobody seemed to be watching me. I threw my ticket pad at it, and it went right through the thing. It didn’t even move. Yup. It was a djemon, all right. The only thing I knew about un-materialized demons is you have to get rid of them. Fast. Before they attach themselves to you and become
materialized
demons. Because once they materialize, they’re with you forever. And as if that wasn’t bad enough, after 9/11, the government required all demon masters to register their demons for tracking purposes. Say good-bye to your passport, airline travel, or your government job.  And that includes Parking Control.

Sweating now, I picked up my ticket pad, and waved it in the direction of the demonic mirage. The apparition slowly dissipated. Gone for now, but he’d be back. I glanced at my watch. It was a tad early for lunch, but there was an extermination company just a couple blocks from here. Visitors from all over the world come Shore Haven every August to be blessed by the ancient spirits and healed at the Spirit Festival. They come to get their auras read, their chakras cleansed, and their fortunes told. It’s also one of the few festivals in North America where you can get your demons banished.