Read Hard as Stone (Passion in Paradise: The Men of the McKinnnon Sisters) Online

Hard as Stone (Passion in Paradise: The Men of the McKinnnon Sisters) 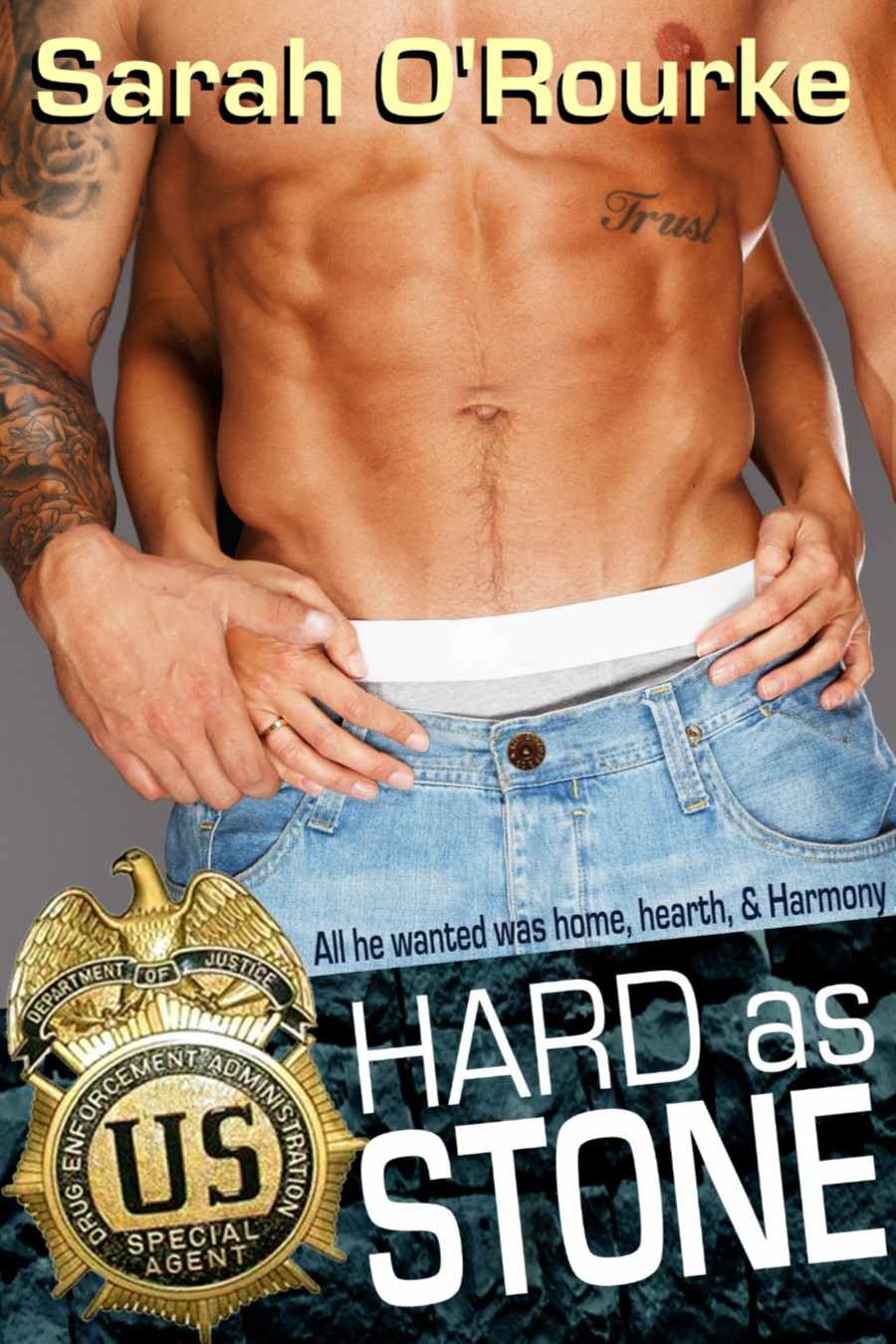 Passion
in Paradise:  The Men of the McKinnon Sisters Series

All
rights reserved. No part of this publication or cover design artwork may be
reproduced, distributed, or transmitted in any form or by any means, including
photocopying, recording, or other electronic or mechanical methods in current
use or to be developed in the future, without the prior express written
permission of the author, except in the case of brief quotations embodied in
critical reviews and certain other noncommercial uses permitted by copyright
law (US. Copyright Act of 1976).

This
is a work of fiction. All names, characters, and settings are fictitious, and
are the sole property of Sarah O’Rourke. Any resemblance to actual events,
names, locales, organizations, or persons living or dead, is entirely coincidental.
Any real setting is used in a fictitious manner with literary license.

This
work of fiction is intended for mature audiences.

Certain
characters in this work of fiction recount experiences of domestic violence and
sexual abuse.  These sections are NOT graphic and are NOT detailed, and this
information is provided only as a warning for those readers who may experience
memory triggers.  Readers are encouraged to reach out to the organizations
listed below if they have been the victims of domestic violence or sexual
abuse.

www.thehotline.org
(Do not contact through internet if you feel that your computer usage is being
monitored.  Please call the toll-free Hotline on the phone.)

Available
24 hours a day, 7 days a week
Each caller & chatter receives confidential,
one-on-one support, and is offered crisis intervention, options for next steps
and direct connection to sources for immediate safety.

At
any given moment, more than 1,100 trained volunteers are on duty and available
to help victims at these sexual assault crisis centers across the
country.  Completely confidential; no personal information required.

Jacob Stone was
going to hell.

Everybody knew it;
it was so far from a secret that it wasn’t funny.   Oh, his mother
still lit candles for him in the hope that somehow he’d find salvation for his
sins. It was a well-known fact around his hometown that his sainted Momma
regularly slipped a little something extra into the offering plate to keep his
mortal soul in the fervent prayers of his parish priest. She still had a vain
hope that her erstwhile son would somehow find the path to true
redemption.

Yeah, that’s
right.  His mother kept a priest on the payroll in a bid to save his soul
from perdition.

Personally, he
thought it was a waste of good money, but hope continued to spring eternal for
his Momma and old Father Anders.  Jake ‘The Widowmaker’ Stone, however,
held no such delusions about what his eternal life would hold after he passed
from this mortal realm.  In all likelihood, fire and brimstone would be
his new reality.  It wouldn’t be much different from his present.

The stains on his
soul were permanent and dark, but he could live with that.  He’d taken
down a lot of bad men by being the best asshole he could be.  He’d drank
with thieves and murderers, caroused with hookers and whores, and snorted coke
with some of the slickest drug pushers to ever deal in the United States – all
in the pursuit of truth and justice.  In short, he did whatever he had to
do in order to separate the head of the monster from the proverbial
crown.  Just ask anybody that had worked with him during his twenty-year
tenure with the United States Drug Enforcement Agency.

Jacob Stone always
got his man, no matter what it took or what he had to do.  In his world,
the end did indeed justify the means.  Cold and merciless, he’d earned the
Widowmaker nickname the old-fashioned way.  Many a criminal had met his
demise after tangling with the wrong end of Jacob’s Glock, and he’d left a
trail of weeping widows in his wake.

What could he
say?  If you did bad shit, meeting an ugly end couldn’t be that much of a
surprise, could it?  He wasn’t a man for which showing mercy came easy.

Some philosophized
that ending a life weighed heavily on a man’s conscience.  Mourning, however,
was not in Jacob’s nature.  More often than not, he found himself questioning
the decisions he’d made to leave some of the scumbags alive rather than dead.
Sure, they’d been spared his bullet, but they faced the criminal justice system’s
prosecution.  And hell, prison would seem like a day at Disneyland for
some of the creeps he’d put behind bars – hardly a fitting punishment for some
of the filth he’d dealt with.  He found himself nostalgic for the days when
punishment could be meted out with a simple bullet to the head at a lawman’s
discerning discretion.  To his credit, he was well aware that this was not
exactly the attitude God was looking for when admitting souls into the Promised
Land.

He simply didn’t
give a fuck.  Not anymore.  If the price of bringing his late
sister’s murderer to justice was his soul, he’d pay the cost without
question.  No sacrifice he’d have to make was too great to see that fucker
go down in flames.

At any rate, he was
well aware that his final eternal destination would most likely be plenty warm.

He could live with
it.

Or, he thought he
could.

Until the day he
actually exchanged words with Harmony McKinnon.

That was the day
everything changed for him.  That was the day that he lost his soul-deep
certainty that he could continue to masquerade as a monster in order to slay
the bigger beast.

Now, he’d never
been one of those pansy-asses that waxed poetic about love at first
sight.  Hell, no.  But even he couldn’t deny that something inexplicable
happened the instant he’d first laid eyes on the special woman that was Harmony
McKinnon, and he couldn’t help the foolish grin that spread across his face as
he recalled that first conversation.

He was sitting
on the cracked leather bench seat of the restaurant booth closest to the back
wall - the same spot he’d claimed every afternoon for the past ten days - when
he first saw her.  For nearly two weeks, he’d waited for this moment to catch a
glimpse of the woman that might prove the key to bringing down one of the
largest drug cartels in the nation and putting some of the worst criminals he’d
ever run across behind bars.  Most importantly to him, though, the woman he
watched just might be the pawn he needed to nail his sister’s killer.

He was
pleasantly surprised; she definitely wasn’t what he’d thought he’d find when he
finally located her. In fact, she was the exact opposite of everything he’d
expected, he thought to himself as he watched her womanly body move toward his table
at the back of the restaurant.  Sure, he’d reviewed the pictures that were in
the file that the DEA had put together on her, but none of those snapshots had
done her an ounce of justice.  In photographs, you couldn’t tell just how touchable
her peaches-and-cream complexion looked or how her long blonde hair shimmered.
A man couldn’t see just how gently her rounded curves caressed the light pink
tee shirt and faded blue jeans she wore like a second skin.  And that smile of
hers… let’s just say that those full, rosy lips of hers would make the wet
dream he knew he’d have tonight a  bestselling box office attraction if it was
ever filmed.  Fuck, seeing that smile up close and in real time was enough to
make even a monk’s cock stand up and pay attention.

Harmony McKinnon
was one mouthwateringly delicious fucking temptation – especially to a man that
hadn’t had his dick wet in over a year.  Back-to-back cases had kept him off
the dating front for far longer than he was comfortable with admitting, and at
his age, one night stands no longer appealed to him.  The simple truth was that
the woman facing him sent his too-long ignored libido sailing into overdrive,
and his stiff dick was insistently reminding him on the state of affairs
beneath his leather belt.

His personal penis
problems not withstanding (there were worse problems to have than a hard dick,
after all), there was an upside to his current situation.  After many hours
spent searching for a way into the McKinnon family fold, evidently, he finally managed
to find the inside track he needed with the closely-knit clan last night.  In
the bar fight last night, he’d protected Harmony’s sister. It’d been dumb luck;
he hadn’t orchestrated the brawl – not that he was above doing that.  He just
hadn’t thought of it.  No, instead, he’d merely been in the right place at the
right time and lent a capable hand in breaking up the scuffle.  Those actions
had endeared him to at least two of the four McKinnon sisters, all of whom
owned the bar/restaurant together.  Judging by the dazzling smile Harmony had
aimed his way when he’d walked into the restaurant a few minutes ago, it was a
good indication that this could be his first big break since arriving in
Paradise.

Now the woman he
was here to watch was steadily making her way toward him.  One plate was held
aloft above her head as she weaved her way through the tables dotting the floor
of the somewhat busy restaurant.

He just needed
to sit there and wait.

“Well, hi there,
stranger,” Harmony McKinnon greeted him as she reached his side.  “I was hopin’
you’d come in this afternoon so that we could thank you properly for your help
yesterday evenin’.”  She offered him another friendly smile as she bent and
deposited the plate in front of him.

Jacob held his
breath as her full breasts hovered just in front of his face and the light
feminine floral scent of her perfume teased his nose.  Reminding himself that
this woman – no matter how sweet she smelled -- could very well be part of the
criminal enterprise directly responsible for his sister’s death, he kept his
face impassive as she straightened.

The Midwinter Mysteries of Sherlock Holmes: Three Adventures & The Grand Gift of Sherlock by Janacek, Craig
The Undertaker by Brown, William
The Cantaloupe Thief by Deb Richardson-Moore
Once by McNeillie, Andrew
Flying Burger by Jared Martin
Something to Declare: Essays on France and French Culture by Julian Barnes
Absent Friends by S. J. Rozan
An Ember in the Ashes by Sabaa Tahir
Not My Type by Chrystal Vaughan
The Lost Days by Rob Reger
Our partner