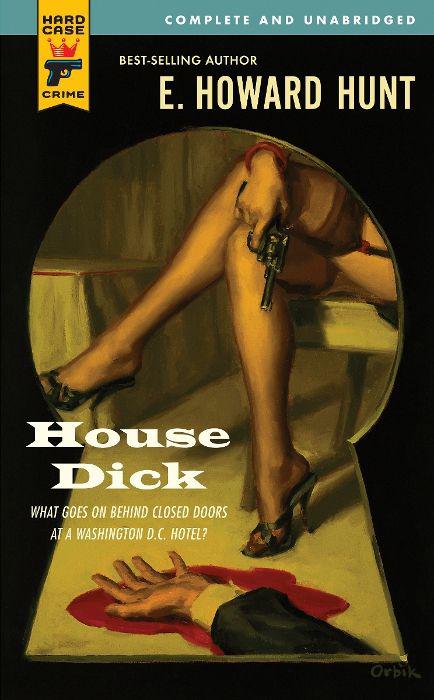 Praise For the Novels of E. HOWARD HUNT

“Hunt is an exceptional storyteller who leads readers through more twists and turns than a laboratory maze.”

“A dramatic story...jaded but credible.”

“Hunt handles dialogue well, moves the action even better, and provides a good bit of verisimilitude...It’s also fun for Washington readers to see how well, or ill, he captures our town and its environs.”

“Moves fast, is fun to read, and ends smartly.”

“Drawing upon his insider knowledge of Washington [Hunt] has crafted a thriller that is certain to be enjoyed...plenty of high-testosterone action here.”

A sound knifed through his thoughts, halting him suddenly. Not from inside the Boyd suite, but not far away. Muffled by a thick door. A woman’s scream.

Novak sprinted down the corridor, halting in front of 516. One hand fingered the master key in his pocket as he pressed an ear against the door panel. From inside, a man’s voice snarling indistinguishable words, a woman whimpering. Then the hard crack of flesh on flesh.

Novak thumbed the door button and his hands folded into fists.

He made an effort to slam the door but Novak’s foot blocked it. Leaning forward, Novak heaved his shoulder and the door burst inward. The man staggered back cursing.

To see her, all he had to do was glance sideways and down. Her back was braced against the edge of a chair, her legs folded under her thighs. She wore a filmy white dressing gown, one sleeve ripped. Her cheeks showed ugly patches of red, the rest of her face was bloodless. She must have been in the shower when the guy came in because the dressing gown was all she wore. The legs were nicely muscled and they melted into slim thighs. Her stomach was taut and she had never been a nursing mother.

The man dropped his head and lunged...

Pete Novak eased his six-foot, hundred-and-eighty-four-pound frame through the revolving entrance door of the Hotel Tilden and saw a girl in a platinum mink coat walking toward the reception desk. Beside her a bellhop struggled with three gray leather bags. The girl was an ash blonde and Novak could catch the scent of light perfume following in her wake. From her gray-gloved hand a gray leather leash slanted down to the collar of a toy Skye terrier. The girl walked with her head thrown back, her heels making subdued clicking sounds on the marble floor of the lobby. What little of her legs could be seen looked promising. The terrier stopped short, braced his paws and yipped protestingly. The girl looked down at him and Novak saw that her eyes were as gray as the furs she wore. As the leash around her wrist. As the luggage Jimmy Grant was wrestling with. Novak sniffed her perfume once more, patted a small package in his side pocket, grinned and decided to stick around.

Novak took out a cigarette, lighted it and watched her register. The clerk flattened his palms on the marble counter, stood on tiptoes and peered over at the terrier. He said something to the girl and Novak saw her frown. He decided to move closer.

The girl was saying, “...but I can’t possibly stay without Toby. Can’t you make an exception just this once?”

“No, ma’am,” the clerk said firmly. “No animals at the Tilden. Not even a canary.”

Novak grinned and said, “Not even a bedbug, miss.”

Her head moved quickly to one side, and cool gray eyes appraised him. Her red lips were full and even, her nose straight and her cheekbones high. The gray eyes were almond-shaped, as though at some time, generations back, Indian blood had entered the family strain. Her tawny skin supported the thought.

He glanced down at the registration card and saw that she had written:
Paula Norton, Muncie, Ind.
The Mr. and Mrs. boxes had been x-ed out. That made her a Miss. For the record.

Slowly and with an edge her voice articulated, “I guess there’s one in every hotel.”

Ash blonde hair swirled as she turned away. To the clerk she snapped, “We were talking about my dog.”

The clerk started to sputter but Novak cut in. “Let’s put him up at Dr. Robinson’s, Miss Norton. The doc’s got a fine place not two blocks away—just a short walk—in case you miss Toby and want to run over and visit him.”

Her head turned again. She smiled and said dryly, “Now it comes to me. You’re a shill for a dog hospital.”

Her lips twisted. “Another way of saying house dick.”

“Yeah,” Novak said indifferently. “Personnel hires them and I fire them. That way we keep all the work in the same office. Efficient.”

“I’m sure I wouldn’t know,” she said coolly, “never having worked in a hotel.” Bending over, she scooped up the Skye and deposited it in Novak’s arms. “Here,” she said, “you take care of him, Mr. Novak—since you’re such a close friend of Dr. Robinson’s.” Then she turned, jerked her head at the bellhop and glided across the lobby toward the elevator. Jimmy Grant stared at Novak, snickered, and picked up her bags. The desk clerk hurried around the far side of the counter and gave the room key to the bellboy. Elevator doors opened, Miss Norton entered and Jimmy followed. Novak frowned. The clerk came back and the nails of his right hand made a scaly sound against the palm. In a nervous voice he said, “You’ve been warned about taking liberties with the guests.”

Novak sighed. “True, Percy. Only too true. But with guests of Miss Norton’s special qualifications I’m a habitual offender; try as I may to resist, it’s hopeless.” Gathering the terrier into a small furry bundle, he pressed it on the clerk. “Be a good fellow and call Doc Robinson, huh? Let’s give our guests a little service.”

Then he turned, brushed Skye hair from his arms, smoothed his tie and walked around the end of the reception counter toward a door marked
Personnel.

He tossed his hat at a stand in the corner, pulled off his coat and opened the Venetian blinds. Gray light from K Street filtered into his office. Novak lighted the lamp on his desk, sucked a lungful of smoke from his cigarette, butted it. Then he pulled a small envelope from his coat pocket, laid it on his desk and sat down. One hand pressed the intercom button and he spoke to the Tilden’s chief engineer.