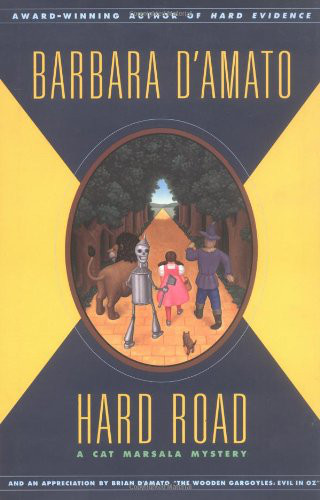 Hard Road
A Cat Marsala Mystery
Barbara D'Amato
And an Essay by Brian D'Amato
"The Wooden Gargoyles: Evil in Oz"

SCRIBNER
1230 Avenue of the Americas
New York, NY 10020
Visit us on the World Wide Web:
http://www.SimonSays.com
This book is a work of fiction. Names, characters, places, and incidents either are products of the author's imagination or are used fictitiously. Any resemblance to actual events or locales or persons, living or dead, is entirely coincidental.
Copyright © 2001 by Barbara D'Amato
Essay copyright © 2001 by Brian D'Amato
All rights reserved, including the right of reproduction in whole or in part in any form.
SCRIBNER and design are trademarks of Macmillan Library Reference USA, Inc., used under license by Simon & Schuster, the publisher of this work.
eISBN 0-7432-1855-8

ALSO BY BARBARA D'AMATO
Hard Evidence
Hard Bargain
Hard Christmas
Hard Case
Hard Women
Hard Luck
Hard Tack
Hardball
To my father, Harold Steketee, who, like L. Frank Baum, kept his boyish enthusiasm all his long life, and who told wonderful stories, too— but, sadly, did not write them down.

This is fiction. None of these people exist. Nor does the Grant Park Oz Festival. But the Chicago area does have Oz festivals. During the first week of August, there is a festival in Lincoln Park which was previously held in nearby Oz Park, named for the books. This one is especially good for children. Another Oz festival takes place in September in Chicago's close neighbor, Chesterton, Indiana. In neither of these could any of the bad events of this book happen, but the good parts— the delight people still take in the Oz books— happen all the time.

My thanks to the people at the Harold Washington Library in Chicago for research help on an elusive fact about Chicago. Thanks to Mary Geneva Finn for showing me around the Lincoln Park Oz festival. And thanks to Mark Richard Zubro for attending the Oz Festival in Chesterton, Indiana, with me and especially for his criticism, which much improved the manuscript of this book. Also thanks to Tracy Reynolds Aleksy for her Oz quotation. And to Erik Wasson at Scribner for all his help.

Thanks to the 1939 MGM movie of
The Wizard of Oz.
There is probably no grade school class in the United States to which you could say "Lions and tigers and bears" and not get the reply "Oh my!" Think of phrases like, "We're off to see the Wizard" and "We're not in Kansas anymore" —practically every line of the film has entered our language. No other movie has so enriched the vocabulary of the world.

Oz fanciers will notice that many of the fictional people in this story bear the names of actual men and women connected with L. Frank Baum. This reverse roman à clef element is included just for fun. It may give some amusement to those who like to solve puzzles. Some references are very obscure. And some names are so obvious that they will be no puzzle at all. However, it is not necessary to know anything about the originals of these names to read this book. Also, lest any reader become frustrated trying to trace every single name, they are mostly, but not all, Baum-related.

Thanks, too, to the International Wizard of Oz Club. Founded in 1957, it publishes a journal three times a year about Baum, Oz, and the influences of Oz on our world. The club may be reached at P.O. Box 266, Kalamazoo, Michigan, 49004-0266 or Ozclub.org.

When my father was a boy, his family had a summer cottage in Macatawa, Michigan, on the shore of Lake Michigan. L. Frank Baum had a cottage there, too, called The Sign of the Goose, because he had paid for it with the royalties from his first success,
Father Goose: His Book
. These cottages would seem very primitive by modern standards. Not only was there no air conditioning, there was no electricity, no central heat, and no running water. But the resort was heaven for a child— a small lake to fish in, a big lake to swim in, lots of children, and no cars or other hazards to watch out for. Baum had four boys. My father played with them, and he often told me the story of going to the Baums', where Frank, the father, would get right down on the floor and play with the children. My father remembered that Mrs. Baum considered this undignified.

Of course, when I was a child, I was given the Oz books to read, luckily at just the right age to read to myself and love them.

Then, in the wink of an eye, it's fifty years later and my granddaughter is in my living room watching the movie of
The Wizard of Oz
. Just a toddler, she is so fascinated that she views the entire movie— standing up!

Between my granddaughter and me, my two boys grew up reading the Oz books as well. How wonderful that words written down a hundred years ago could so delight generations of children! Thank you, Mr. Baum.

1
WE WISH TO WELCOME YOU TO MUNCHKINLAND

The Yellow Brick Road ran straight for about two hundred yards to the Emerald City Castle. There it split into two parts, circled the castle, rejoined, and went away on the far side. To our left was a clump of trees. There was a sign just before the little woods, shaped like a hand with a pointing finger. On it was written, LIONS AND TIGERS AND BEARS.

I read it to Jeremy, who was six and could decipher a few words but not very many yet. He said, "Oh, my."

The Yellow Brick Road ran down the approximate middle of Chicago's Oz Festival. The "road" —a yellow background with brown outlines of bricks— was painted on the central pathway through the Grant Park festival area, where Taste of Chicago and other big civic events take place throughout the year. At Taste of Chicago, held in July, restaurants from all over the Greater Chicagoland area rent booths and put their best foods forward. I absolutely love it— Chicago deep-dish pizza, Harry Caray's fried calamari, Chicago red hots, TNT chili and the Great Chili Cook-Off, fried funnel cakes, death by chocolate— I could live there.

My little pal Jeremy is my nephew. He has red hair and freckles, a round face, a zippy personality, and if you gave him a fishing pole you'd be certain he was Tom Sawyer. My job today, on this warm Thursday in July, had been squiring him around Chicago from mid-afternoon until the 7 P.M. public opening of the Oz Festival. The opening ceremonies with Very Important People were to start at eight. His dad Barry, who is the second oldest of my five brothers, is an events coordinator. He makes corporate events, festivals, and conferences happen. Barry was busy with the festival preparations and Jeremy's mother, Maud, was at home, very busy with their three-week-old daughter. The name Maud sounds old-fashioned and sort of stately, which is charming in view of the freckly, bouncy, red-haired Maud I knew and liked, who had been Northern Illinois Women's Ping-Pong Champion three years in a row. Jeremy had not yet expressed any envy of the newcomer, but the hope was that having me show him some attention might offset future sibling rivalry problems.

Jeremy and I had spent the afternoon together and had gone on a carriage ride through downtown Chicago. The horses wear red plumes and pull nice, old-fashioned, leather-appointed buggies. The driver wears an 1890s cape and top hat. All right, it's kitschy, but Jeremy loved it, and I had to admit to a sneaking enthusiasm myself. It was horribly expensive, but Barry had handed me some extra cash to use in minding the child, including money for parking and unparking my car a couple of times, which in Chicago costs more than most events.

We stopped at two bookstores, looking for an Oz book Jeremy didn't have.
Glinda of Oz
was the last Oz book entirely written by L. Frank Baum. The stores didn't have it, and we decided that was okay because we didn't want to carry it around all evening anyhow. I took out my small pocket notebook and wrote down the title and "get someplace soon." Then I took out a red pen and underlined the note.

"Why do you write things down, Aunt Cat?"

"Why do you carry so many pens?"

"Because I'm afraid something important will come up and I won't have anything to write with."

"To make sure I knew this was a really important matter. Some of my notes aren't as important."

"Why is this important?"

That got him. He stopped asking questions. For a whole thirty seconds. Then he said, "What are we gonna do next?"

"I'll show you." I took him to the observatory at the top of the John Hancock building on Michigan Avenue to see the 360-degree view of Chicago. On a clear day, and this was an absolutely crystal clear day, you can see four states— Illinois, Wisconsin, Indiana, and far away the coast of southern Michigan. Lake Michigan is much too wide to see across, but this southern curve makes you feel you almost could.

Finally, having spent two hours minding a child, I took him to the restaurant area on the ninety-fifth floor of the Hancock, ostensibly to buy him a soda or a Shirley Temple. Actually, the point was to get myself a nice cold beer and to sit down. How do parents find the strength to do this job twenty-four hours a day?

My admiration for Maud rose a whole lot. I'd have to tell her so.

We arrived at Grant Park at six-thirty. And now we were in Oz.

Grant Park is big. Fifteen city blocks long, it lies up against Lake Michigan between Lake Shore Drive on the east and Michigan Avenue on the west, Randolph Street on the north and Roosevelt Road on the south— in other words, it bellies right up against the Loop. This makes it well over a mile in length, not even counting the "museum campus" running south from its south end, which includes the Field Museum, Adler Planetarium, Soldier Field, and the Shedd Aquarium. In the center of Grant Park is Buckingham Fountain. Eight months of the year this dramatic tiered pink marble confection with its fanciful sculpted sea creatures throws a hundred-and-thirty-five-foot water display. The fountain was modeled on the Latona Fountain at Versailles. However, in typical New World robber-baron style, the donor, Miss Kate Sturges Buckingham, daughter of one Ebenezer Buckingham, who made his fortune in Illinois Central Railroad grain elevators, ordered it to be twice as large as the one in Versailles.
That'll show those snotty French
, I can imagine her saying. It holds one and a half million gallons of water.

Jeremy and I could see Buckingham Fountain about a block away as we walked down the Yellow Brick Road. There is no entrance fee at Grant Park festivals.

"Where are we supposed to meet Dad?" he asked.

"At the Emerald City castle at nine P.M. That gives us about two hours to explore the festival."

"If I wanted some popcorn—" I said, just to get him started.

"And I do want popcorn." In Mo, it snowed popcorn. Jeremy and I, fellow Ozians, often played "can you top this?" with Oz trivia. I really should not call it trivia, but minutiae. Nothing about Oz is trivial. Our enthusiasm can be very tiring for those who are not aficionados. I have friends who are Trekkers who almost drive me around the bend with their force fields and "Who was Q?" "Who was Mr. Worf?" "Did Captain Kirk really ever say, 'Beam me up, Scotty'?" (The answer seems to be no, it was just "Beam me up.")