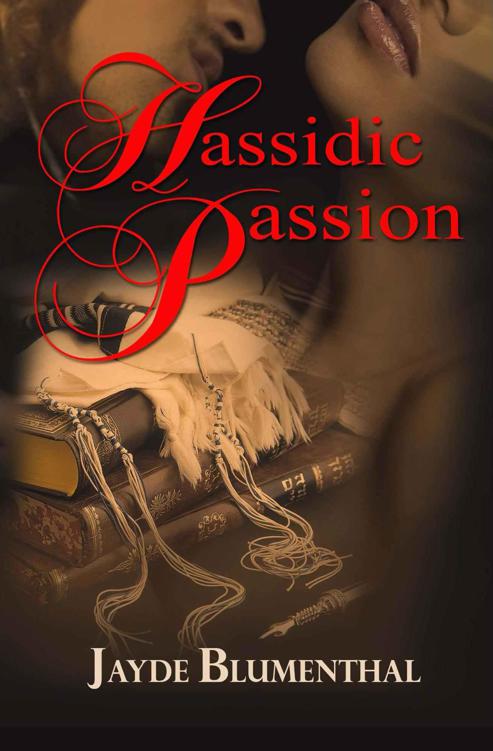 All Rights Reserved.
No part of this publication may be reproduced, stored in a retrieval system, or transmitted, in any form or in any means – by electronic, mechanical, photocopying, recording or otherwise – without prior written permission.

He wrapped his legs around the woman from behind.  She turned to smile back at him, her lips puffy and red.  Sweat gleamed on their bodies under the hot lights from above.

A drop of Beryl’s sweat hit the page, and he wiped it off guiltily.  He
couldn’t pay for the magazine even if he had somewhere to put it back home.  Which he didn’t.

He couldn’t tell from the picture which hole
the man was pumping the woman in, so he let himself imagine it was the tighter one, her dirty hole.  He reached into his pants pocket.  He had deliberately removed the coins so they wouldn’t jingle.  Reached into his pants and started rubbing himself through the soft fabric of his front pocket.

He imagined pulling off his yarmulke, tossing aside his
tzitzis
to roll on the rug with this loose woman.  To thrust himself into her tight brown ass.  He tried not to think of the holy Jewish girls who walked up and down the street in his own neighborhood.

How much he’d like to rub the slimy drops
that must be squeezing out of his cock all over their little pink pussies, their clenched brown holes.  He trembled; his knees almost buckled underneath him.
How could all the men in these magazines fuck standing up?
he wondered.  They’d have to be very strong, so their legs wouldn’t give out, carried away with passion.

Instead of the
blonde in the magazine, he imagined silky brown hair.  Long and glossy with health.  An 18-year-old
kallah
, a fresh virgin bride.  Pushing his face into her hair; reaching around to stroke the front of her buttoned-up blouse, and slowly, slowly unbuttoning it.

Pulling down her underpants
.  Reaching around the front, yes, but also around the back and gently licking his fingers to push them in one opening, then the other.  She might enjoy it, in the hands of the right lover.  Was he the right lover?  Beryl had no idea.

All his experience was theoretical so far; but theoretically speaking, he was a great lover.  Far better than the other boys in yeshiva, he was sure.

Maybe she’d even kneel in front of him and suck him off, the way this blonde girl was; here, on the next page.  Any good Jewish girl knew you weren’t supposed to kneel.  That was for the
goyim
.  But maybe, if he was lucky, he’d get a not-so-good girl and she’d put a towel down, then perch herself in front of him, lick him all over, kiss her way up his shaft and –

“Hey,” the owner called from the front.  “You gonna buy that?”

Beryl quickly stashed the magazine back on the shelf behind the others.

No chance of buying the magazine.  With no job to pay for the magazine – he learned full time in yeshiva – and no home to stash it in, because he lived in the yeshiva’s dorm, all Beryl could afford to do was look.  Look, and drool.

Perhaps someday – but no, probably not.  He was twenty-one now, just starting to make a name for himself in the small, closed world of the yeshiva.  At this rate, he’d be learning well into his thirties, if not his whole life.

And anyway, how else would he find a girl?

That was what all the girls said they wanted these days:  Torah scholars.  It had been different when his father was his age.  Then, a man was expected to be a man:  to go out and get a job to support his family.

If only, Beryl sighed.  Okay, right now he was only interes
ted in having extra money to buy pornography, but despite what his friend Yossi called his “mad skills” for Torah learning, he often wished he could have a career instead.

Would it kill him to work in a bookstore, talk to people all day, recommend books?  Nice books, of course; not the
shmutz
he snuck out to read.

But no girl
today wanted a man who worked in a bookstore.  Not that the girls in his neighborhood were anything like the ones he saw in the magazines.

But if
they were the girls who’d consider him, then he’d have to make himself as eligible as possible.

And for the time being at least, until he found his
bashert
, his intended one, that meant sitting and learning.

He ducked out of the shop, hearing the owner swearing b
ehind him as the door slammed.

It was a long walk back.  He didn’t have money for subway fare; usually
the only travel he did was back and forth to and from the yeshiva and his dorm.  As it was, the other guys would wonder why he hadn’t shown up for lunch.

He couldn’t very well tell them that s
ome things were more important than food.  He was sure they wouldn’t understand.

Raizy was indulging her secret fantasy.

Oh, not the one where she was a best-selling writer, being interviewed on TV, watching her book soar to the top of the charts.

She’d never told anybody, just snuck off when she was su
pposed to be helping the poor family she volunteered with.  Oh, she did go help them, a few times a week.  She was a good girl.

But every
once in a while, she snuck out to a movie instead.  It could be any movie, as long as she was sure there would be… romance in it.
Romance
was a euphemism, but Raizy knew what it was really called.  Smut.

She screened all her movies carefully, checking them on the same site her parents used to make sure all the movies she
and her sisters saw were appropriate for young, religious girls.  Few met their standards.  They didn’t go to many movies.

But sometime around her sixteenth birthday, Raizy realized that the
site could be used for the opposite purpose.

With its separate rankings for sex, violence and profanity – as determined by Christian reviewers who presumably watched every movie to make sure it was suitable for kids – the site was perfect for choosing films with just the right amount of nudity and smut.

Smut
was such an old-fashioned word.  And these days, even “just the right amount” was getting boring.

The scenes that had been so exciting at first,
when a man would mount a woman on top, their bare asses pumping mysteriously into each other – that was no longer enough for her.

This is what all her teachers and her parents had warned her about:  the slippery slope.  These days, the scenes she e
njoyed most needed the man and woman to be fully naked, fully visible, slick with sweat, sheets fallen away so every detail was on view.

She told herself watching the movies was good research… for when she became a writer.  Although, of course, her co
mmunity would surely ostracize her if she incorporated even a tenth of what she saw into any book she dared to write under her own name.

Not that there was much excitement left in Hollywood mo
vies these days for someone like Raizy.

All her life,
her family and principals had railed against Hollywood.  But these days, most movies she watched were actually too tame for her tastes.

In the privacy of her bedroom, she went much, much fu
rther than Hollywood ever could, no matter what the rating.  She knew there were riskier movies, racier movies, hotter movies.  Smuttier movies.  But she couldn’t bring herself to think about those.

Where would she find them?  And how could she possibly get them home
to watch?  No chance she could download anything… not with the “kosher internet” package her parents had that didn’t even let her watch ordinary videos.

Still, here in the
movie-theater darkness, she could enjoy a taste of her fantasies.  As the characters shed their clothing, explored each other’s bodies, Raizy reached down past her lacy waistband and into her cotton panties.

Her experienced fingers first circle
d her sex, like a teasing lover, then parted the lips, darting inside and out.  Quickly, she pulled her hand out, as she always did.  She licked her fingers, tasting herself; licking herself like a lover would – someday, she promised herself.  Then, she plunged them back inside, vibrating her whole hand gently until she brought herself to the brink.

She gasped
silently into the darkness, submerged in her own slimy hot wetness.  And then, Mira plunged over the edge, losing herself in the crashing waves that washed, washed, washed through her, her cunt squeezing, snatching, twitching in delight.  Milking every last drop of pleasure.

Afterwards,
as always these days, she mainly felt disappointed and discouraged.  Hollywood was losing its hold on her, and she wondered grimly if she’d ever have that kind of lover herself, in real life.

As her friends were marrying and starting families, she knew well enough that men like the ones in movies were few and far between.  Hollywood was one thing; the world of the yeshiva was a completely different planet.

She’d brought it up the other day with her friend Chana.

“How do you think things will be with our husbands… you know, once we’re married?” Raizy had asked.  She couldn’t very well start out by asking about things between their legs.

Even if that was what she meant.

“It will be wonderful,” said Chana
, almost robotically.

“What will?” asked Raizy.
Sometimes, her friends drove her crazy, echoing what they’d always been told.

“I can’t wait to be married
.  My husband will help me grow and discover my purpose in this world.  Why Hashem put me here.”

Well, that was Chana for you.  Even worse, Raizy had no doubt that she completely meant it.
“Do you think about him touching you?” she dared to ask.

“But do you think about what it will be like?”

“Not really.  We’ll find out soon enough.”
How could she be content with that?

There was no good way to ask what was on Raizy’s mind.

It
wasn’t exactly what she’d wanted to know, but that was as close to a Hollywood-style heart-to-heart as she was going to get, with Chana.

Just like the closest
she was going to get to the lovers she saw on screen would be a pale, pasty yeshiva boy.

If she was lucky, he might
be willing to taste her down there.  If his rabbi allowed it.   It he wasn’t more frightened of her than a rabbit was afraid of his shadow.

Still, there was time.  She wasn’t settling down just yet, and she didn’t even bother looking at the yeshiva boys bustling home at the end of the day when she returned from the movie theater.  No, they were boys in every sense of the world.

What Raizy needed was a man.