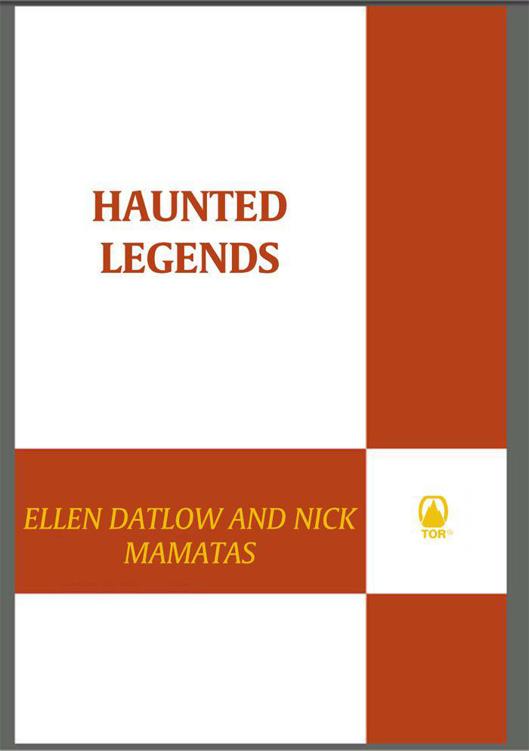 The Coyote Road: Trickster Tales
Salon Fantastique
Swan Sister
The Faery Reel: Tales from the Twilight Realm
A Wolf at the Door
The Green Man: Tales from the Mythic Forest
Troll’s Eye View

WITH KELLY LINK AND GAVIN J.GRANT

This is a work of fiction. All of the characters, organizations, and events portrayed in these stories are either products of the authors’ imaginations or are used fictitiously.

“Fifteen Panels Depicting the Sadness of the Baku and the Jotai” © 2010 by Catherynne M. Valente

To my parents, Nathan and Doris Datlow
—E. D.

Fifteen Panels Depicting the Sadness of the Baku and the Jotai
• • Catherynne M. Valente

Return to Mariabronn
• • Gary A. Braunbeck

For Those in Peril on the Sea
• • Stephen Dedman

Between Heaven and Hull
• • Pat Cadigan

There ain’t no such thing as ghosts.

Ghost stories, we have plenty. They’re easy to find, too. Every town has some legends—lakes made of tears, phantom hitchhikers, mean ol’ men or ladies too ornery for heaven and too obnoxious for hell, and houses that resist occupation with all their supernatural might. There are the ghostly folktales as well, that serve as reminders to keep one’s children in one’s sight at all times lest they end up eaten. Of course, some of these stories are also warnings
to
children to beware strangers or get enough sleep. Ghost stories even evolve into modern urban legends, which have their own social purposes. “Stay away from that fast-food restaurant, you’ll regret it” is one.

The ghost story doesn’t even necessarily require a ghost. In “The Ash-Tree” by M. R. James, there is a curse and a witch and “an enormous spider, veinous and seared,” but no real ghost. Even the spiders, despite their gigantism—“the size of a man’s head”—aren’t truly supernatural. They cannot travel much farther than the titular tree in which they live, so the curse is easily avoided by staying out of the room with the tree-facing window, and they die in flames like any other sort of everyday arachnid. Most ghosts aren’t so easy to get rid of, because of what they represent: regret, nostalgia, hunger for another chance to get it right, and warnings to the curious. So we keep telling stories to one another, and we keep telling ourselves that they’re just stories. True stories.

There are enough ghost stories out there, and enough desire for them, that
pretty much every locality and region has its own cottage industry dedicated to publishing the local variations. Sadly, most of these books of “true” ghost stories tend to be . . . bad. The local university folklorist can’t write much more than term papers on the local ghosts. The “paranormal investigator” with his electronic stud finder recalibrated to find ghosts instead of pieces of wood, hell, he can barely
think,
much less write a compelling story. It wasn’t high technology or modern rationality that exiled most ghost stories to books nobody reads—it was sheer bad writing. Most of the short stories just didn’t scare us anymore. The same way every city and town has been rationalized, bureaucratized, and Starbuckized into a homogeneous territory of tedium, the ghost story, too, has been rendered safe for sale to daytrippers, safe for presentation alongside “local” taffy (made centrally in a giant factory a thousand miles away) and the world’s largest ball of twine.

And yet, ghost stories cannot ever be made completely safe, because we are not ever safe. There are old houses one shouldn’t enter, hitchhikers one shouldn’t stop for, bits of forest a little too easy to get turned around in. Children wander off, and sometimes they don’t come back, but those innocent photos on the milk cartoons and the
MISSING
continue to haunt. And even the most complacent members of the bourgeoisie have their fortunes, and often their homes, built on piles of metaphorical bones, if not always real ones. There are things we still don’t know, though we know there are no ghosts and no monsters. Ghosts are in the gaps. Life is still haunted by death. But the stale, easily digested stories won’t suffice. Enter
Haunted Legends.

Our concept was simple: ask some of the best writers of horror and dark fantasy in the world to choose their favorite “true” regional ghost story, and to rescue it from the cobwebs of the local tourist gift shop or academic journal. The Double-Face Woman, the fox spirits of Vietnam, the specter of communism still haunting Russia in the form of Comrade Beria’s ghost, we’ve got ’em. The famed vampires of Rhode Island, the haunted amusement park you may not have ever heard of if you’re not from the Pacific Northwest, Australian shipwrecks, and the Indian ghost city of Fatehpur Sikri, we’ve got them, too. There ain’t no such thing as ghosts, but warnings to the curious, of those we have plenty.

Richard Bowes has written five novels, the most recent of which is the Nebula Award–nominated
From the Files of the Time Rangers.
His most recent short-fiction collection is
Streetcar Dreams and Other Midnight Fancies
from PS Publications. He has won the World Fantasy, Lambda, International Horror Guild, and Million Writers Awards.

His home page is
www.rickbowes.com
.

Last Sunday night the Dutchman flew, the Headless Horseman rolled in from Sleepy Hollow. It happened when I paid a visit that was in part nostalgia, but in larger part morbid curiosity, to a corner of my degenerate youth. I even kissed the fingertips of a very bad old habit of mine and told myself it was for memory’s sake.

A bunch of fellow survivors and I were hanging out in a tacky New York City bar with strong roots in our past. The gathering followed the kind of ceremony one gets to attend at a certain age; we’d just cleaned out the apartment of a late acquaintance.

Eddie Ackers was the deceased’s name. He and I had never been close. Our tastes and interests didn’t coincide and we hadn’t seen each other since we’d had adjacent desks in the offices of Flying Dutchman Fashion Promotions, a small garment district ad agency, forty years before.

A couple of weeks back my friend the Major phoned and told me that Eddie had died suddenly. I assumed it was a heart attack and didn’t press for details. The funeral was upstate in the Hudson Valley town he’d come from at a time that wasn’t convenient for me to take off from my library job.

Then last Tuesday the Major phoned again to say that none of Eddie Ackers’s ex-wives nor the son and daughter he’d produced along the way were interested in his effects. Eddie’s sister was, but couldn’t come down to the city. The Major seemed anxious for me to rejoin the old gang for an afternoon.

We call Barbara Lohr, Major Barbara or just the Major, because of her
height, bearing, and commanding British accent. She told me, “The sister’s sweet as can be but getting on in age, as we all will. You should have seen the Dutch church and the graveyard where Eddie was laid away—utter Sleepy Hollow. And,” she added, “after we’ve done the right thing, I think we may all go out and get a bit sentimental.”