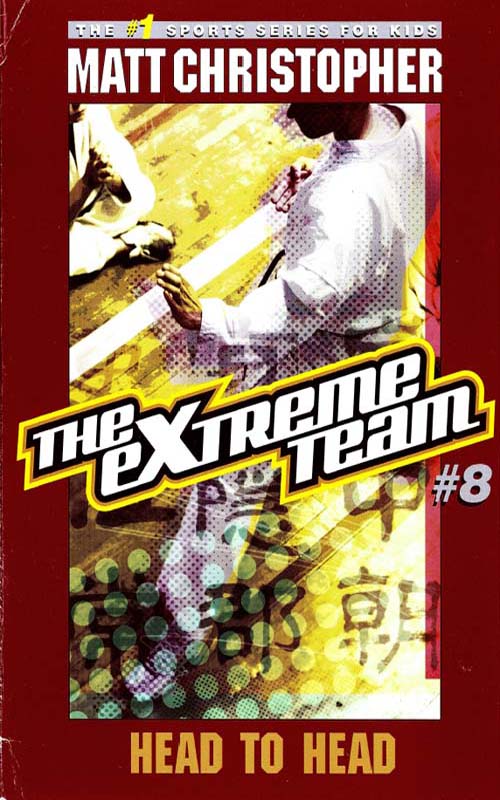 Matt Christopher
®
is a registered trademark of Catherine M. Christopher.

The Animal Stances of Kung Fu

Mark Goldstein heard his friends before he saw them. Xavier “X” McSweeney, Charlie Abbott, Savannah Smith, Belicia “Bizz”
Juarez, and Jonas Malloy were singing at the top of their lungs as they trooped in to the kung-fu
kwoon
where Mark took lessons. He wasn’t there for a lesson this Saturday, however. He was having his birthday party at the martial-arts
school.

“This is going to be awesome!” X said, rubbing his hands together.

“You bet it is.” Sifu Eric Hale, Mark’s teacher, came out of his office. He led the children to a large, open room with red
mats on the floor and mirrors along one wall. He motioned for Mark to step forward.

“At our school,” the teacher said, “more experienced students help out those just starting to learn kung fu. Today Mark is
the one with experience and you are the beginners. All set, Mark?”

Mark got into the horse-riding stance — feet wide apart, toes pointed out, knees bent. He pulled his elbows tight into his
sides, his fists turned upward.

Mark’s fists jabbed forward, one, two, one, two. His left leg flashed sideways. His right arm flew up to knock away an imaginary
punch. He dropped to a crouch and swept his right leg around as if to trip an opponent. Then he hopped back up and returned
to the horse-riding stance. 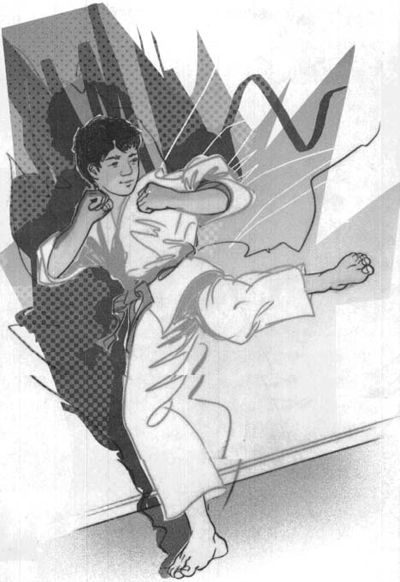 “That was totally fluid!” Jonas cried. The other kids laughed.

“Fluid. You know, smooth, like waves in one of those wave-machine things!” Jonas rolled his arms up and down.

As everyone laughed again, Mark glanced at his teacher. He knew Sifu Hale didn’t like kids clowning around during class.
Of course, this isn’t class, it’s a party
, Mark reminded himself.

Sifu Hale interrupted them. “Actually, fluid is just what you want to be when practicing martial arts. Each move should flow
into the next.” He motioned for them to stand. “Okay, time for the rest of you to be fluid, too. Copy Mark’s stance and try
the punches first.”

With Sifu Hale and Mark watching closely, the five friends did as instructed.

“Not bad,” Sifu Hale said, “but, Bizz, put your thumbs on the outside of your fists. If you were really hitting something,
they would be broken by now.”

Bizz hurriedly shifted her thumbs to the correct position.

“I did the same thing the first time I tried punches,” Mark admitted. She gave him a smile.

“Next move: the side kick,” the teacher said. “Mark, show them again, in slow motion, please.”

Mark went through the move in four parts: lifting his knee up in front of him to the chamber position, thrusting his leg out
sideways, chambering it again, and putting his foot down. The others followed suit.

“Good. Practice a few more times, then try to put the punches and the kick together. Nice and slow, then pick up momentum,”
said Sifu Hale.

For the next few minutes, the room was silent except for the sound of cloth moving — and of X murmuring “punch, punch, punch,
punch, kick, get ready” over and over.

Mark was doing the moves, too, when he heard Sifu Hale say, “Totally fluid, Jonas. You seem to have a knack for kung fu.”

Mark looked at Jonas’s reflection in the mirror. He tried to remember if his teacher had ever told him that he had a knack
for kung fu. He was pretty sure he hadn’t.

Jonas caught Mark watching him. He grinned and did the punch-kick combination — then added the arm block and the leg sweep.
Each move was perfect. Mark looked away with a funny feeling in the pit of his stomach.

While they worked on the moves, Sifu Hale set up an obstacle course with tunnels, stacks of mats, and stationary punching
bags. “Courses like this challenge you to quickly adapt your movements to new
situations,” Sifu Hale explained. “Let’s see how you do.”

One by one the kids crawled, hopped, and punched their way through the course. “I never knew it could feel so good to hit
something!” Savannah cried as she pummeled the bag.

X held up his hands in mock terror. “Just so long as the bag’s your target, and not me!” he joked.

Savannah struck a fighting pose. “Don’t tempt me, X-man,” she growled playfully, pretending to jab at him.

“I’ll protect you, X!” Jonas bellowed. He jumped in between X and Savannah.

“My hero!” X trilled in a high voice.

As Mark watched his friends goof around, the knot in his stomach loosened.
So they don’t take kung fu seriously
, he thought.
Big deal. They don’t know what
really
goes on here
.

After they finished the obstacle course, Sifu Hale had everyone line up against the back wall. He took out a huge body ball
and bounced it a few times.
“You kids have heard of dodgeball, right?” Before they could answer, he flung the ball toward Charlie and X. They darted out
of the way and the ball hit the wall, bouncing back to the teacher. He hurled it again, this time at Bizz. She, too, got out
of the way just in time. On the next throw, Charlie wasn’t as quick and had to take a seat against the back wall.

They played three rounds of dodgeball. Bizz won the first round; Jonas, the next round; and Charlie, the third. Mark came
in second each time.

“Okay, one more activity before you hit the party room,” Sifu Hale said. He took out a long foam noodle, the kind used in
swimming pools to help people float. He told the kids to get in a circle around him. “Let’s see how quick your reflexes are.
If the noodle taps you three times, you’re out. Ready?”

He held the noodle at the height of their heads. “Crouch low like a snake in the grass!” He spun around. Laughing, the kids
ducked to avoid being tapped.

“Now jump like a leopard pouncing!” This time Sifu Hale whipped the soft noodle around at floor level. Savannah and X were too slow and got bumped, but the others cleared it. Sifu Hale continued to call “crouch!” and “jump!”,
tapping the slower players until at last there was a single person left in the circle — Jonas. 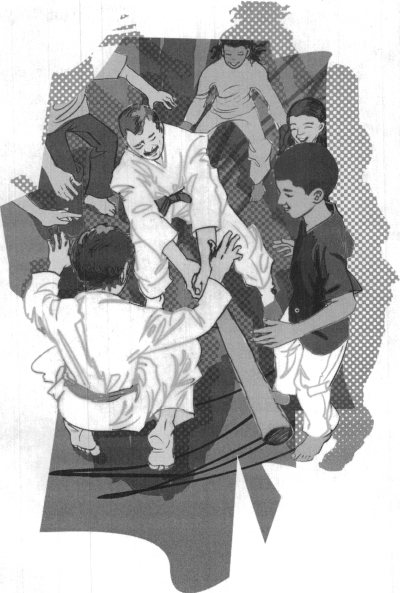 “To the one with the best reflexes goes the prize,” the teacher said. He handed the noodle to Jonas and bowed. Jonas accepted
the prize and returned the bow.

Like a fist to the gut the funny feeling returned to Mark’s stomach.

The party ended soon after the cake and ice cream were gone. Mark’s friends had given him a lot of cool presents and he made
sure he thanked them all when it was time for everyone to head home.

Mr. and Mrs. Goldstein collected Mark’s gifts. “We’ll help you finish cleaning up after we put these in the car,” his mother
said.

Mark nodded. One of the
kwoon
rules was that students help keep the place clean. That meant party rooms, too, so after his parents left he picked up a
broom and started sweeping.

“Happy birthday, Mark! Can I give you a hand?”
Mark looked up and was surprised to see Mr. Malloy. He thought Jonas had already left.

“Uh, no, but thanks anyway, Mr. Malloy,” Mark replied. “I guess Jonas is around here somewhere.”

“He’s in there, talking with your teacher.” Mr. Malloy jerked a thumb over his shoulder.

Mark looked into the office. Jonas was sitting across from Sifu Hale. As Mark watched, Jonas gathered up a pile of forms,
shook Sifu Hale’s hand, and walked out with a big grin on his face.

“What’s going on?” Mark asked as Jonas joined them.

“I’ll tell you what’s going on!” Jonas fake punched Mark in the arm. “I’m signing up to take lessons. Say hello to your new
kung-fu buddy!”

Mark nearly dropped the broom. “You — you’re going to be taking lessons here?”

“Won’t it be great? We can practice all our moves together. It’ll be cool.” Jonas tugged on his coat. “Hey, get back to your
broom, bro. I want this place 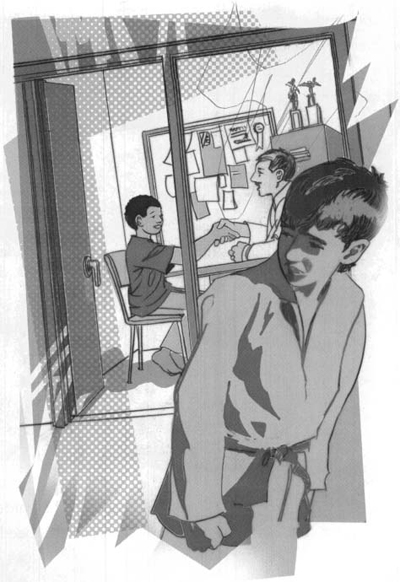 spic and span for my first lesson on Monday!” He gave a wave and followed his father out the door.

“Yeah. Right.” But Mark didn’t immediately start sweeping. Instead, he closed his eyes and took slow, deep breaths. When he
opened his eyes again, he felt better. He got to work.

Sifu Hale came out of his office. “Did you have a good time today, Mark?” he asked.

Mark nodded. “It was great, Sifu.”

“Your friend Jonas has a lot of energy,” Sifu Hale went on. “I’m sure he’ll be able to use it when he starts next week.”

Mark swept up the last of the cake crumbs and emptied the dustpan into the trash without saying a word. He could feel his
teacher’s eyes on him.

The Painted Horse by Bonnie Bryant
Spring Tide by K. Dicke
Dark Water by Koji Suzuki
Connections by Jacqueline Wein
No Place to Hide by Susan Lewis
The Beast Within (Monster Fetish) by Kelsey Charisma
Ghosts in the Morning by Will Thurmann
Compromised Miss by Anne O'Brien
Last Impressions (The Marnie Baranuik Files) by A.J. Aalto
A Cowboy at Heart by Lori Copeland, Virginia Smith
Our partner