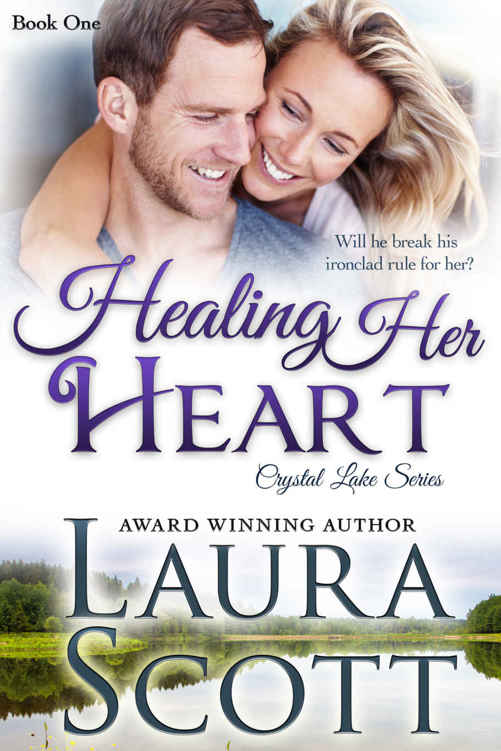 Book 1 in the Crystal Lake Series

By payment of the required fees, you have been granted a non-exclusive and non-transferable right to access and read the text of this eBook. No part of this eBook may be reproduced, transmitted, downloaded, decompiled, reverse engineered, or stored in or introduced into any information storage and retrieval system in any form or by any means, whether electronic or mechanical, now or hereinafter invented without the express written permission of the copyright owner.

This is a work of fiction. Names, characters, places and incidents are either the product of the author’s imagination or are used fictitiously, and any resemblance to any actual persons living or dead, business establishments, events or locales is entirely coincidental.

All rights reserved under International and Pan-American copyright conventions.

“Larissa, I put a new patient in room four for you,” Merry Haines, the Hope County Hospital ER charge nurse, called out.

“Okay.” Larissa Brockman finished documenting on her recent discharge and then pushed away from the computer. The hour was well past midnight, but the ER remained incredibly busy on this Memorial Day Friday night. Or rather, Saturday morning.

She crossed over to room four but then stopped abruptly in the doorway as she saw the familiar face of her patient. Annie Hinkle, a fifty-year-old woman looking a decade older than she should, was seated on the gurney cradling her right arm against her chest.

No. Not again. The tiny hairs lifted on the back of her neck in alarm. This was the second time Annie had been here over the past month. The last time was for a black eye that she swore was not caused by her husband, Kurt’s, fist.

What would be her story this time? Larissa took a deep breath and let it out slowly before entering the room. “Hello, Annie.”

“Hi.” Annie’s gaze barely met hers before skittering away.

“What did you do to your arm?” Larissa asked, keeping her voice gentle as she approached. She had the distinct impression the woman was on the edge and wouldn’t hesitate to flee if cornered.

“I fell off the front porch—you know how klutzy I am.” Annie refused to meet her gaze but kept staring down at her arm as if the injury might heal itself if she concentrated hard enough.

“I don’t think you’re klutzy at all,” Larissa murmured. “Show me where it hurts.”

“Right here,” Annie said, removing her left hand to reveal a darkly mottled bruise encircling her wrist. Larissa felt a little sick looking at the injury, knowing there was no possible way this had happened from a fall. She could clearly envision a man’s large hand squeezing hard enough to cause this. She’d be surprised if there weren’t a few broken bones hidden beneath the horribly discolored skin.

“Okay, I’m going to get you a cold pack for that, and I’m sure the doctor will want X-rays, too.” She kept her voice calm with an effort. “Do you need something for pain?”

Annie lifted her shoulder in a half-hearted shrug. “Maybe a pain pill would help.”

Larissa nodded, thinking the poor woman needed far more than a pain pill. She batted a wave of helplessness aside. “Are you hurt anywhere else?” she asked. “Maybe you hit your head? Or your ribs?”

“All right, I’m going to check in with Dr. Allen, and then I’ll be right back.”

She recognized the signs and symptoms of abuse. Only too well. Dark memories from the past threatened to overwhelm her, and she fought them back with an effort. Struggling to keep her emotions under control, she grabbed an ice pack from the supply rack and then went searching for Dr. Gabe Allen, the physician in charge of the patients on her team.

He was on the phone talking to the inpatient hospitalist about a patient he wanted admitted. She hovered nearby, waiting until he finished his call. He hung up the phone and flashed a warm smile. “Hi, Larissa, what’s up?”

His smile was far too attractive, an effect she’d been fighting for months now. So far, she thought she was hiding her feelings pretty well. “I need you to examine my patient in room four,” she said in a soft tone in a voice. “I’m convinced she’s being physically abused.”

Gabe’s smile faded. “Are you sure?”

She’d only been a nurse here at the Hope County Hospital for six months, but she’d thought she’d proved her competence by now. She scowled. “Trust me, I’m sure.”

Gabe gave a terse nod. “All right, let me finish up this inpatient admission, and I’ll be right over.”

“Thanks.” She hurried back over to Annie’s bedside, squeezing the disposable ice pack between her hands to activate the chemical reaction inside. “Here, place this around your wrist, okay?” she instructed. “Dr. Allen will be here shortly.”

Annie winced but didn’t say anything as she placed the cold pack over her wrist.

Larissa struggled to find the right words that might break through the woman’s wall of denial. “Annie, you don’t have to put up with anyone hurting you. We have programs that can help keep you safe.”

“No one’s hurting me,” Annie swiftly denied. “I told you I fell off the porch.” Her voice rose with indignation, and instinctively, Larissa knew she needed to back off or the woman might bolt.

“Okay, I’m sorry. I just don’t like the idea of anyone hurting you.” She forced a reassuring smile. “You’re such a nice woman, and you certainly deserve to be treated as such. Oh, look, here comes Dr. Allen now.”

“How are you, Mrs. Hinkle?” he asked. “I understand you may have broken your wrist.”

“I fell off the porch,” Annie said, repeating her story like a parrot.

“Hmmm,” Gabe murmured as he removed the ice pack from her wrist. His eyebrows pulled together in a dark frown when he saw the extent of the injury. He probed the skin gently, his expression serious. “We’re going to need several X-rays of this wrist,” he said.

Larissa swiftly logged on to the computer. “AP and lateral views?” she asked as she entered the order.

“Yes.” Gabe replaced the ice pack and gave Annie a stern look. “You know this didn’t happen from a fall,” he said bluntly.

“Yes, yes, it did.” Annie’s voice was beginning to sound desperate. “I’m klutzy and I fell off the porch.”

Gabe’s frustrated gaze locked on Larissa’s, and she knew exactly what he was thinking. She gave him a tiny nod, acknowledging their dilemma, and then turned toward Annie. “Okay, just relax for now. The radiology tech will be here shortly to take you over to get the X-rays. Dr. Allen, do you think she could have a dose of Percocet for the pain?”

“Great, I’ll be right back.” Larissa walked over to the automated drug-dispensing machine and punched in her password along with Annie’s name and ID number. The Percocet drawer popped open, and she removed one dose before closing it up again. When she spun around, she nearly bumped into Gabe.

“We have to notify the sheriff’s department,” he said in a low voice.

“I know.” The Wisconsin state statutes were pretty clear regarding cases of suspected abuse. Still, she knew that doing the right thing could also backfire in a big way. “But you heard her. There’s no way she’s going to press charges against her husband. And I’m afraid that he’ll only get angrier once the deputy questions him. What if he takes that anger out on her?”

Gabe thrust his fingers through his dark brown hair. “You could be right, but what choice do we have?”

“I don’t know,” she admitted, hating the feeling of helplessness. The system was supposed to work for victims, but more often than not, it created a vicious cycle, one that couldn’t be broken unless the victim took a stance. But too many of those victims didn’t. “Let me talk to the social worker first, okay?”

“Okay, but giving her pamphlets on domestic violence isn’t going to help,” Gabe said with a dark frown. “We have to call the authorities.”

She nodded, knowing with a sinking heart that he was right. She could only hope that the police could get through to Annie better than she and Gabe had been able to.

She closed her eyes and prayed that Annie wouldn’t end up back in the ER with injuries that were far worse than a black eye or a broken wrist.

Gabe stared at the deputy in disbelief. “You’re telling me there’s nothing you can do?”

Deputy Armbruster held up his palms in a helpless gesture. “What do you want me to say? I could haul Kurt Hinkle down to jail, but if she doesn’t press charges, he’ll be out by morning.”

That couldn’t be right. “Surely there’s enough evidence there to charge him with abuse even without her testimony?”

“Look, maybe he admits he grabbed her too hard, and she jerked away and oops? Look what happened?” The deputy sighed heavily. “Without Annie testifying against him, this could be made to look like some sort of accident rather than an intentional act of abuse. With no priors, he’ll walk.”

Gabe sensed Larissa beside him, and he was annoyed that he’d recognized her vanilla scent. Regardless, he kept his attention focused on the problem at hand. He just couldn’t believe there wasn’t something that could be done legally to prevent Kurt from hurting his wife. Again.

“What about the black eye from a few weeks ago?” she asked.

Gabe scowled. “I don’t remember that.”

“You weren’t working that shift,” Larissa pointed out. “I was on with Dr. Gardener.”

Deputy Armbruster pursed his lips. “We could maybe argue that it’s a pattern, but again, not likely. I got a black eye myself playing softball with my girls.” He smiled grimly. “My daughter Elise has a good arm.”

Gabe understood what the deputy was saying, but that didn’t mean he had to like it. “So what can we do?”

“Look, I can go chat with Kurt if you want me to. At least he’ll know that we’re on to him and—”

“Because he’ll be mad and take his anger out on her, that’s why.” Larissa turned toward Deputy Armbruster. “If you can’t arrest him, then just leave it alone.”

Gabe couldn’t believe what he was hearing. What was she doing? Why wasn’t Larissa standing up for their patient? “I think it would do Kurt good to know we’re on to him.”

“Why?” Larissa asked, her green eyes sparking fire. “So next time he can hurt her where the bruises won’t show?”

“Leave it alone,” she pleaded. “I’ll talk to Annie, okay? Maybe I can help in ways the police can’t.”

Deputy Armbruster shrugged. “Okay, let me know if anything changes.”

“Gabe? We need your help over here,” Merry called. “This patient’s breathing is getting worse.”

Reluctantly, he nodded and hurried over to where Merry was standing beside another patient who was clearly in distress. The beeping oxygen-saturation monitor showed numbers that were steadily declining. “Get me an intubation tray now.”

All thoughts regarding his other patients vanished as he quickly focused on saving this gentleman’s life. He placed the breathing tube and then quickly connected the oxygen supply, giving him several slow, deep breaths.

“O2 sat up to 90 percent,” Merry announced with satisfaction.