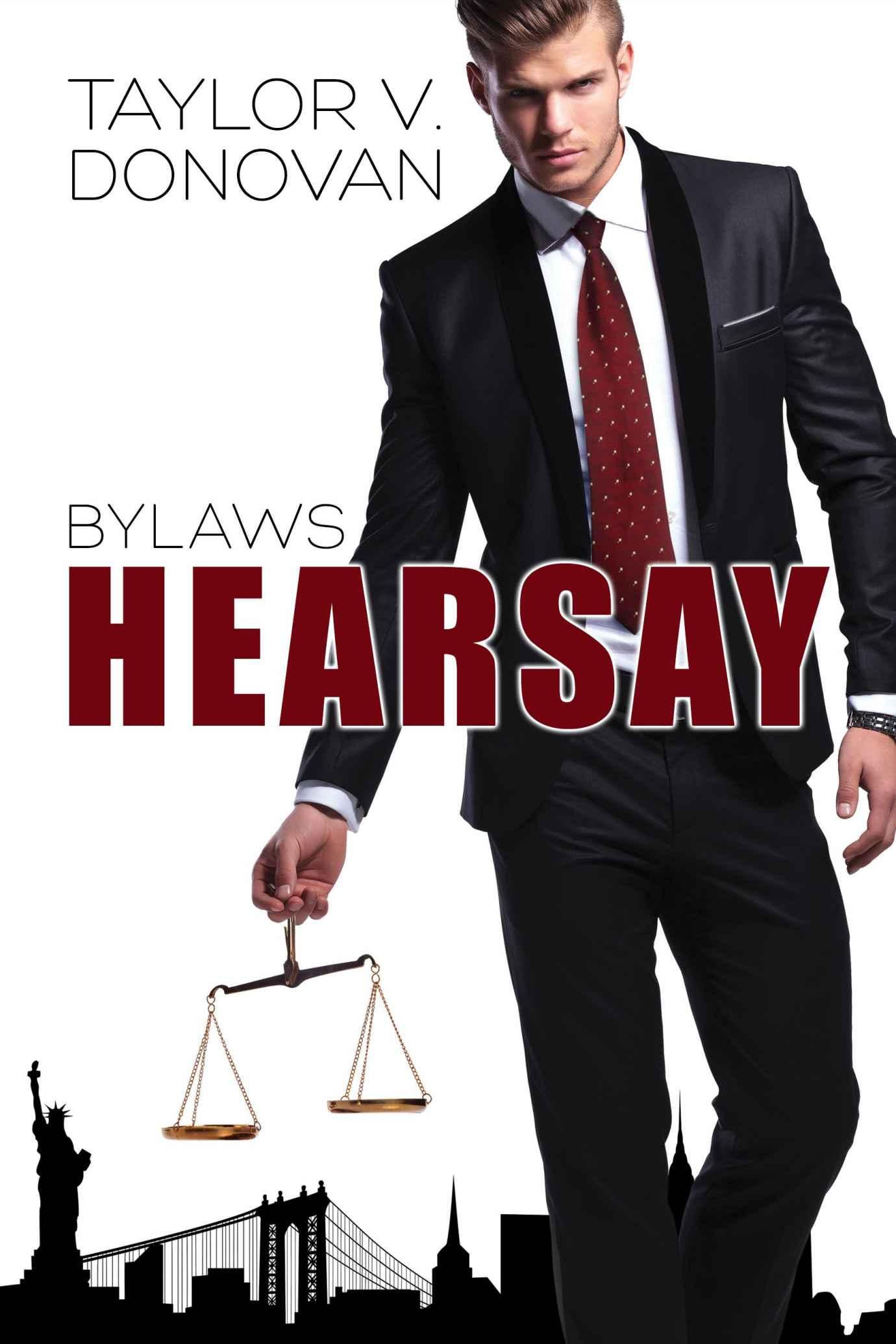 This book is licensed to the original purchaser only. Duplication or distribution via any means is illegal and a violation of International Copyright Law, subject to criminal prosecution and upon conviction, fines and/or imprisonment.

This eBook cannot be legally loaned or given to others. No part of this eBook can be shared or reproduced without the express permission of the publisher.

To my daughters, because you're my world.

To S, just for being there.

To LC Chase, for holding my hand and being an awesome friend.

To Andi, Trish, Gyn, and Adele, for the edits and beta reading.

And especially to my readers, because you all rock.

Roman Bradford had heard the rumors about his ex more times than he cared to remember in the past month. He'd heard them from his partners, close friends, a few mutual acquaintances, and even from his accountant.

He had ignored them every single time. He'd refused to believe his ex-boyfriend would stoop so low. Roman had been eager to move forward. His future was looking promising again. He hadn't wanted anything to get between him and Derrick, the man who had captivated his attention from the moment they met.

But he'd collected the pieces.

He was ready to start again.

It wasn't until very recently that he'd acted on his attraction to Derrick. Even though he was free to do so, he forced himself to carefully consider the possible ramifications of getting involved with one of his employees. If things went sour between them and Derrick turned out to be vindictive, Roman could get sued for sexual harassment or misconduct at the very least. He
knew
this, and after the debacle of the past few months and consequent distress, the last thing he wanted was to risk a similar mess. Yet he'd been unable to resist going after him.

Roman was rather subtle in his pursuit of Derrick. The lingering, veiled glances during the two-hour monthly meeting with the firm's associates and the coincidental encounters in the building's lobby, the cafeteria, and court, had progressed to casually running into him in Central Park during their lunch break for the past week and a half. They'd gotten to know each other better during their conversations. The attraction was definitely mutual and almost palpable, and Roman didn't doubt for a second they were compatible in every important way. Things were going so well between them that he'd decided the previous night it was time to take the next step and ask Derrick out to dinner and maybe the ballet. Hell. He even wanted Derrick to be his date to his parents' dinner party in three days.

But those damn rumors about James had been waiting for him when he got to his office this morning. They'd been louder than ever, too… so loud it was impossible to ignore them anymore.

Roman shook off his preoccupied thoughts and glanced around him. The Pond was one of his favorite places in the city. A little piece of heaven smack in the middle of his demanding world. It never ceased to amaze him how easily he could find solitude here despite the hundreds of people that walked by the water's edge every day.

He watched the ducks in the water and regarded the trees that would soon start changing colors. Once again he marveled at the beauty and simplicity of the Gapstow Bridge, then he closed his eyes and blocked out everything. He was a bundle of nerves. Today, more than ever, he needed to soak in the peacefulness that surrounded him.

"Have you decided on a present for your parents' wedding anniversary yet?"

Derrick's question brought him back to their conversation.

Roman shifted his body toward Derrick in an effort to give his undivided attention to the man who had managed to make him feel so much in such a short amount of time. Talking to Derrick was an absolute pleasure, and in addition to being physically perfect in Roman's eyes, he was also sensible and genuine.

"I'm going to take your advice and give them a vacation to some exotic destination." He brushed off a few crumbs from Derrick's tie and smiled when he noticed him shudder.

"My mother goes shopping in Paris once a month," Roman said with a fond smile. "She still tries to drag me along with her to carry her bags whenever my dad refuses to follow her around."

"It won't be easy to surprise her and your father, then."

"I think the Machu Picchu ruins in Peru would be nice."

"That sounds so cool. Have you been there?"

"I went with Alan and Sergio when we were still in law school." Roman took his glasses off and put them in the pocket of his suit jacket. "Mom loved the pictures we took. That's why I think she'd enjoy it."

"From what you've told me, I get the impression she'd enjoy a week in the jungle with no plumbing, as long as she's with your father."

"Forty-five years together," Derrick said wistfully. "Almost a lifetime spent together with the one person they promised to love forever." He sighed deeply. "Your parents are very lucky, Roman."

"What about your parents?" Roman asked. "Are they still together?"

"No. They weren't as fortunate." He shook his head slowly. "Not like they didn't want to. I mean, they loved each other
so
much. My mom chose my dad over her own family, a career, and a very comfortable life. Like your parents, they wanted to be together forever, but it wasn't meant to happen that way."

Derrick glanced at him shyly from under thick, long lashes, probably thinking it was too soon to be sharing such personal details. Roman smiled at the guy, encouraging him to continue. Derrick's candor was one of his most endearing personality traits, and Roman would hate it if all of a sudden he started feeling self-conscious.

"My dad didn't have an education, you know? He worked as a janitor at Columbia University. That's where they met, when my mom was a freshman. She wanted to be a lawyer, but my grandparents cut her off when she refused to end their relationship. She moved with Papa to his tiny apartment and never looked back. He worked so hard to provide for us… We didn't have money, but we were happy." He blinked rapidly, but his tears didn't disappear. "Mama got very sick with lupus when I was a twelve. She didn't make it."

Roman resisted the urge to reach out and hug Derrick. It was too soon for that kind of gesture. "I'm sorry to hear that," was all he said.

"They had a good run, but instead of enjoying a long happy marriage, Papa had to be strong for us kids and watch the woman he loved die slowly." Derrick grabbed a napkin from his lunch bag and wiped the few tears that were now spiking up his lashes. "I respect him so much for it. I don't know if I could do the same if I were in his position. I don't know that I could deal with watching the love of my life waste away. Christ, I'm a terribly selfish person, aren't I?"

Roman's heart dropped to his stomach when he heard those words, but his voice sounded normal when he tried to reassure Derrick. He might not like to hear that the guy was reluctant to be with someone who was sick and dying, but he understood where he was coming from.

"It wasn't only your father watching a loved one die. She was your mother, too, and you were just a kid. That had to be a very traumatic and painful experience for you and your siblings."

"It was." He smiled a little. "Thank you for listening to me blab."

"I always look forward to hearing you talk about whatever you want." Roman caressed Derrick's cheek softly with the back of his hand. "So blab away. I don't mind."

"You sure about that?" Derrick's flirty smile made Roman's heart skip a few beats. "Because I think I'd like to talk your pretty ears off every chance I get."

"Sounds like a great plan," Roman admitted, returning the smile.

That seemingly innocent question almost knocked Roman flat on his back. So much desire was packed in it; so much expectation and hope. His feelings weren't one-sided. Derrick was along for the ride, and Roman was so happy he could've jumped up and down, if only his mind wasn't plagued by doubts.

Roman put his almost untouched grilled chicken wrap inside the bag. "I need to get back to the office," he said quietly.

Derrick frowned. "Is there something wrong?"

Apprehension had him by the balls. He also had a sore throat, a headache, and swollen lymph nodes. He felt like crap.

"Roman?" Derrick's beautiful amber eyes were clouded with uneasiness and concern. "Did I say something wrong?"

"Then what is it?

Roman looked away and cursed under his breath. "I might be getting a cold," he said in a louder tone.

"I can get you some tea if you want."

Derrick grabbed Roman's hand to stop him from getting up, and he obliged, hoping this wouldn't be the last time he was this close to the other man.

"Can you please tell me what's going on?" Derrick almost begged.

Roman couldn't say a word. Uncertainty had gotten a hold of him, and it was making him sick to his stomach. He wished he didn't have to go, but as much as he liked the guy, Roman knew he wouldn't be able to even look at Derrick again until he'd found out whether the rumors he'd been hearing about James were true.

He pulled his hand from that soft, firm grip he wanted to feel all over his body, and took several steps back. "I need to get back to the office."

"Will you be back tomorrow?"

Derrick was trying not to sound hurt, but Roman heard it in his voice anyway. He saw it in his eyes. And because he couldn't offer an honest answer, he chose to not say anything at all. He just turned around and walked away from what he knew was his second chance at love, hopefully not for the last time.

Please, God… Please. Don't let this be the last time we're together like this.

The legal term for testimony in a court proceeding where the witness does not have direct knowledge of the facts asserted and normally considered inadmissible as evidence against the accused... unless the charges were child molestation. In that case, all bets were off, and a third, fourth, or even fifth party allegation alone could land a person's ass in jail before they became fully aware of what the fuck was going on.