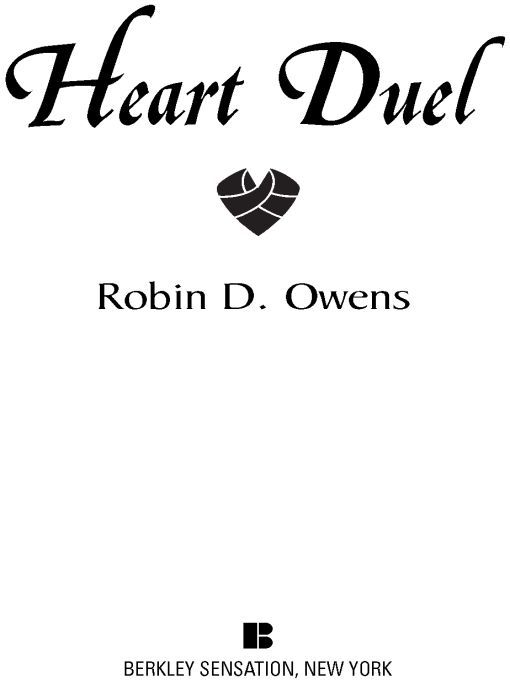 Table of Contents
Title Page
Copyright Page
Dedication
Acknowledgements
Â
One
Two
Three
Four
Five
Six
Seven
Eight
Nine
Ten
Eleven
Twelve
Thirteen
Fourteen
Fifteen
Sixteen
Seventeen
Eighteen
Nineteen
Twenty
Twenty-one
Twenty-two
Twenty-three
Twenty-four
Twenty-five
Twenty-six
Twenty-seven
Twenty-eight
Twenty-nine
Thirty
Thirty-one
Â
Teaser chapter
Praise for
Heart Thief
“I loved
Heart Thief!
This is what futuristic romance is all about. Robin D. Owens writes the kind of futuristic romance we've all been waiting to read; certainly the kind that I've been waiting for. She provides a wonderful, gripping mix of passion, exotic futuristic settings, and edgy suspense. If you've been waiting for someone to do futuristic romance right, you're in luck, Robin D. Owens is the author for you.”
âJayne Castle
Â
“Returning to the planet Celta, the world of psychically gifted people first introduced in the RITA Award-winning
HeartMate,
Owens spins an entrancing tale . . . Although the setting is fresh and totally captivating, it is the well-developed characters, both human and animal, that make this story memorable. Crafty villains, honorable, resourceful protagonists, and sentient pets drive the plot of this fast-paced, often suspenseful romantic adventure. As have others before her (e.g., Anne McCaffrey, Marion Zimmer Bradley), Owens has penned a stunning futuristic tale that reads like fantasy and is sure to have crossover appeal to both SF and fantasy fans.”
âLibrary Journal
“Owens has crafted a fine romance that is also a successful science fantasy yarn with terrific world-building. The second in a series, following
HeartMate
(2001), Owens's latest stands on its own.”
âBooklist
Â
“A tremendous science fiction romance that affirms what many fans thought after reading the prequel (
HeartMate
): that Robin D. Owens is one of the sub-genre's giant stars. The story line is faster than the speed of light, but more important is this world's society seems so real that psychic powers feel genuine . . . [a] richly textured other planetary romance.”
âBookBrowser
Praise for
HeartMate,
winner of the 2002 RITA Award for Best Paranormal Romance by the Romance Writers of America
“Engaging characters, effortless world-building, and a sizzling romance make this a novel that's almost impossible to put down.”â
The Romance Reader
Â
“Fantasy romance with a touch of mystery . . . Readers from the different genres will want Ms. Owens to return to Celta for more tales of HeartMates.”â
Midwest Book Review
Â
“
HeartMate
is a dazzling debut novel. Robin D. Owens paints a world filled with characters who sweep readers into an unforgettable adventure with every delicious word, every breath, every beat of their hearts. Brava!”
âDeb Stover, award-winning author of
A Moment in Time
Â
“A gem of a story . . . sure to tickle your fancy.”
âAnne Avery, author of
All's Fair
Â
“It shines and fans will soon clamor for more . . . A definite keeper!”â
The Bookdragon Review
Â
“This story is magical . . . doubly delicious as it will appeal to both lovers of fantasy and futuristic romance. Much room has been left for sequels.”â
PNR Reviews
Titles by Robin D. Owens
HEARTMATE
HEART THIEF
HEART DUEL 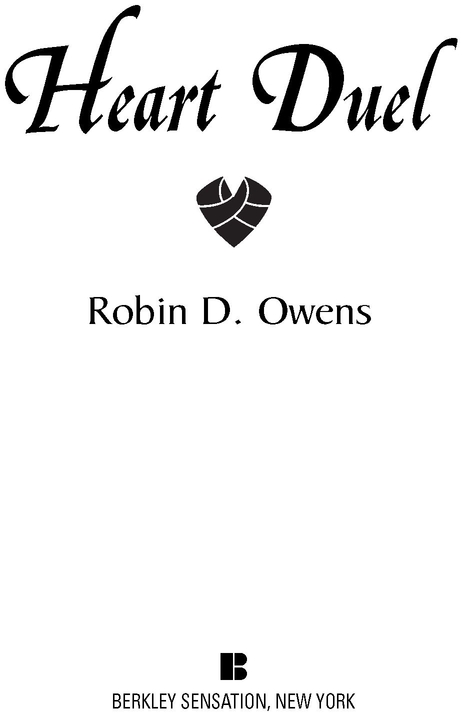 DRUIDA CITY, CELTA, 403 years after Colonization, Summer, Month of Holly
Â
The audio page shrieked into Lark's bedroom, wrenching
her awake. “Lark, teleport to Primary HealingHall
now!
”
Mayblossom Larkspur Hawthorn Collinson teleported to the HealingHall intake, instinctively channeling her adrenaline rush from being jerked out of sleep into her psi powerâHealing Flair. Agony encircled her. Her nose twitched at the smell of blood and other spilled bodily substances.
Lark stumbled into a cleansing tube and croaked her name. A spell whirled around her, whipping her quilted pajamas, sterilizing her. The door opened.
Another Healer grabbed Lark's wrist and hustled her to a body, placing Lark's hands on a trembling, bloody body. “Heal!” she instructed.
Lark focused on her job, her vocation, the reason she'd survived after her husband's death. The present abdominal wound was deep and deadly. Even as she stopped the bleeding, started closing the awful slashes, she knew she felt a broadsword cut. “Blood here!” she ordered.
Her nose quivered again, now noticing the whiff of flesh burnt by blasers. Rage rose with her gorge. She swallowed the reaction and used her fury to pump energy into the dying man.
A duel. A terrible, senseless duel! From the moaning around her and the twelve broken auras she sensed, it had been more than just one-on-one. A melÃ©e, a street fight. She mentally listed the four feuds going on. As her eyes adjusted to the light, she looked down at the colors the man wore, dark gray and greenâa member of the T'Holly household.
Again she had to swallow. This feud was the worst. The Hollys and the Hawthorns. There'd been hostility between the Hollys and her Family as long as she could remember. She'd hoped the conflict would fade; instead it seemed to intensify.
Both GreatHouses belonged to the colonists' FirstFamilies, powerful in wealth and status and Flair. If the combat continued, it could disrupt the whole city. And as Hawthorn FirstDaughter, she'd be subjected to Family pressure.