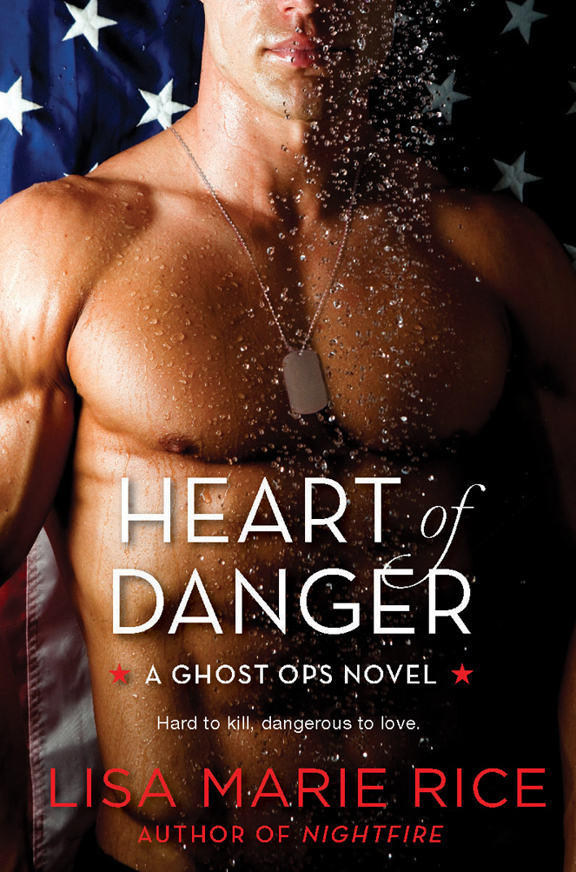 This book is fondly dedicated to the Brainstormers, my wonderful group of crazy writers, who helped me brainstorm this series. It wouldn’t exist without you all.

And, as always, it is dedicated to my wonderful husband and son.

The
New York Times
has learned that the fire on January 5 which destroyed a research laboratory in Cambridge, Mass., operated by Arka Pharmaceutical Laboratories, was not due to the explosion of a gas pipeline, as originally reported.

The
New York Times
has received exclusive information from a senior government official that the laboratory came under attack from a group of elite commandos under separate leadership in the U.S. military, known as “Ghost Ops.”

The U.S. military is forbidden to operate on United States soil under the Posse Comitatus Act.

The alleged leader of the top secret unit is the former commander of famed SEAL Team Six, the team that killed Osama bin Laden ten years ago, Captain Lucius Ward. Captain Ward’s military records are sealed. The
New York Times
has been unable to access his records under the Freedom of Information Act.

Forty-one people died in the conflagration at the laboratory, among them MacArthur Foundation fellowship winner Dr. Roger Bryson, a longtime candidate for the Nobel Prize for his work on the biochemistry of vaccines.

“We have reason to believe that the destruction of our Cambridge laboratory, which was close to a cancer vaccine, was the work of competitors hoping to stop our progress,” declared Arka CEO Dr. William Storensen. “All efforts must be made to bring these criminals to justice.”

This reporter has also learned that Captain Ward had several million dollars invested in a rival pharmaceutical company. Captain Ward’s remains have not been identified.

The three surviving members of the attack commando team, whose names were redacted from the documents obtained by the
New York Times,
disappeared en route to a court-martial in Washington, D.C. There is an outstanding warrant for their arrest.

One moment her charming, lavender-colored little eCar, which infinitely preferred balmy climes, was bravely climbing the frozen, rutted road and the next it just stopped dead.

In the middle of a snowstorm. At night. On a deserted mountaintop.

There was nothing Catherine Young could do.

Oh God,
she thought.
Not now.

She pressed the ignition over and over again but the car was utterly dead. It was the latest generation eCar, and the salesman had assured her that if something happened to the main engine, there was an ancillary one with separate power guaranteed to take her at least another ten miles.

Every instrument was dark. Not even the inside lights turned on when she opened the driver’s side door. She got a terrifying blast of snow and sleet like a fist to the face and shut the door immediately.

Her cell phone was dead, too. Utterly dead, screen blank. An iPhone 15, normally she could talk to the moon with it, but now it was an unresponsive, though still elegant, slice of metallic glass. Her tablet was dead, too, she found when she scrabbled in the backseat for her trusty iPad 8. For the first time in its life, it refused to switch on. It, too, was an inert piece of metallic glass.

It was impossible to see anything outside the car, to gauge how close she was to the edge of the road. The snow was too thick for that. She’d barely been able to see three yards ahead with the special halogen headlights on high. Now, with a dead car, no lights, no form of communication, she could have been on another planet.

A cold and hostile one.

She hadn’t counted on being on the road after dark, and if she hadn’t had a compulsion to find Tom “Mac” McEnroe so strong it was like the compulsion to breathe, she would have turned around hours and hours ago. But there had been no giving up, not even when she tried three dead ends and had had to painfully back out over frozen ruts and dead branches, trying to find a viable road, traveling all day, too driven by her compulsion to stop. She didn’t—couldn’t—stop, not even when light faded from the sky and the few flakes that had fallen turned into a tempest.

Finally, she knew it was the right road when she nearly plowed into a boulder, a hulking granite shadow darker than the night, right in the middle of the road.

She’d been told all of this, of course.

He’ll kill your car, your cell phone, your computer, your GPS, your music player.

Not in words so much as in images. She’d seen herself sitting in a vehicle in the dark, no lights on. The images hadn’t made any sense then but they did now.

She’d been told how to find him.

He will hole up somewhere on Mount Blue. Take the most deserted road. The road will be almost impassable. There will be an obstacle—a fallen tree, a boulder. Drive around the obstacle. He will know you are coming. He will find you.

This had been communicated in images as well, fuzzy and incomprehensible yet irresistible. She’d found herself on the deadend road without having even thought about it during the course of the two-hundred-mile drive. She’d pressed the button to start the car and it was as if the car had driven itself here.

So here she was, clutching her useless steering wheel with two sweat-dampened hands, on a deserted mountain road, in a dead car, in the dead of night.

The last human outpost had been forty miles back and that had been two stores and one of the last gas stations left in California. She’d glanced curiously at it as she drove by. She couldn’t remember the last time she’d seen a gas station. This one had looked ramshackle and deserted, tattered, faded pennants flapping in the rising wind.

Heat was draining out fast. A vicious gust of wind rocked her car. She loved her car. It was sleek and stylish. However, though it was made out of a revolutionary lightweight tough resin that would tighten in a crash, it was no match for this gale-force icy mountain wind. What made it so good on the freeways made it a death trap in a freezing snowstorm.

Another gust rocked the vehicle, hard. The wheels on the left side lifted a little, then dropped the car back with a thump. Catherine’s heart pumped hard as she fought panic. An image flashed in her mind. The car, buffeted wildly by the howling winds, slowly sliding off the road, tumbling down the mountainside.

It was a perfectly plausible scenario.

What a way to end her life—tumbling over the edge of a mountain cliff until her car smashed against an obstacle. A boulder, a tree. It wouldn’t explode, of course. But if she lived, she’d be trapped in the wreck, bleeding out, with no hope of rescue. No one knew where she was. This was wilderness. It was perfectly possible they’d find her body only in the spring.

Another powerful gust. The car shifted, the wheels slipping an inch or two. She broke out in a sweat which instantly chilled her skin in the cold. A wild white sheet of snow lashed across the windshield, ice spicules chattering against the glass.

The steering wheel was frigid under her hands. She relinquished the wheel and tucked her hands under her arms. There were gloves in the baggage compartment but it was electrically operated and would never open now that the car was dead. The gloves might as well have been at the bottom of the ocean for all the good they could do her back there.

Catherine shivered again, a full-body shudder. She was a neurologist, but she was also an M.D. and understood very well what was happening. Her skin and lungs were shedding heat with every passing second and her body was trying to generate it by shivering.

This is insane
, she thought. Yet it was the logical ending to the poisoned chalice at the heart of her life.

Her gift. Her curse.

All her life, she’d worshipped reason. Bound herself to rationality with iron clamps, studying math and biology and medicine and then neuroscience. Trying with all her might to banish her gift from her life.

This crazy quest for a man she’s never met, this Tom McEnroe, was going to cost her her life. Like the appointment with death in Samarra, Catherine could evade her gift no longer.

The wind shook her car again, angrily, as if claiming it for its own. She shivered again. The cold was so intense it was painful. Pain was good. As long as she felt pain she was alive and the hypothermic damage could be undone.

Time stood still as she listened to her heartbeat in the darkness. At first she tried to count the beats to give herself a sense of time. After two hours she lost count. After another eternity, she felt the exact moment her heart started to slow. Her core temperature had dropped. She was beginning the slide into hypothermia. It felt as if she were already dead and buried deep underground.

Too exhausted for tears, Catherine leaned her head against the steering wheel, preparing to die. Hoping it would be quick.

A hard, loud rap startled her. She sat up, heart beating painfully, trying to figure out where the noise had come from.

The next instant her door was opened and an arm yanked her out into the snow. She stood there blinking. A big hand on her arm was all that was keeping her muscles from collapsing, dropping her to the snow-covered ground.

There was barely enough ambient light to see by. If the man had been even a foot away from her she wouldn’t have been able to see him.

He was incredibly close, though, close enough for her to feel his body heat, the first source of heat in what felt like forever.

He was huge, shoulders filling her field of vision, so tall she had to crane her neck back, though she couldn’t see his features. He was dressed in black, head to toe, with a gun strapped to his thigh and a long knife in a sheath, face covered with a black ski mask with insectoid eyes, a sight so terrifying she’d have screamed if she had the breath.

Red Flags by Tammy Kaehler
Stranded with the Cajun (Captured by a Dragon-Shifter Book 3) by Michelle M. Pillow
Woman On the Run by Lisa Marie Rice
Twins of Prey by W.C. Hoffman
Silence by Becca Fitzpatrick
Romance: One Fine Holiday by Amy McAdams
The Hunt by Allison Brennan
Ghosts of Christmas Past by Corrina Lawson
A Little Harmless Fantasy by Melissa Schroeder
Vulgar Boatman by William G. Tapply
Our partner