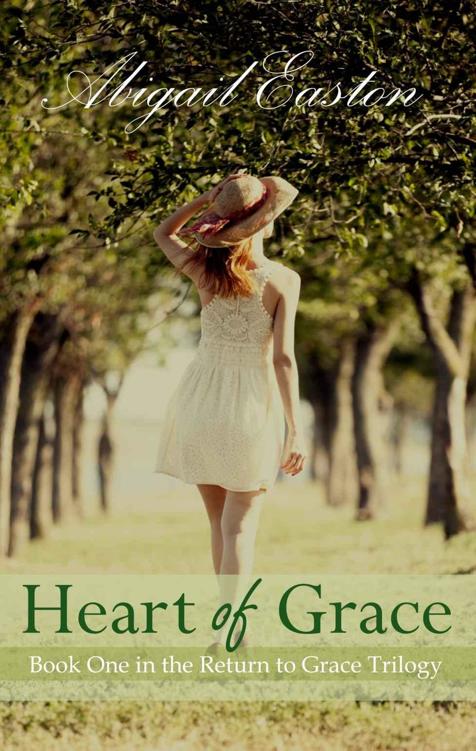 This book is a work of fiction. Names, characters, places and
incidents are products of the author’s imagination and are
used fictitiously. Any resemblance to actual events or
locations or persons, living or dead, is entirely coincidental.

No portion of this book may be copied, retransmitted,
reposted, duplicated, or otherwise used without the express
written approval of the author, except by reviewers who may
quote brief excerpts in connection with a review.

Heart of Grace
is the story of woman who finds redemption in
the last place she expected to find it:
home
. When I sat down to
type those first words about a business woman returning to the
hometown she had escaped fifteen years earlier, I had no way
of knowing the pain and redemption that was about to occur
in my own life. Through the years and the numerous rewrites
of
Heart of Grace
I endured a failed marriage and several more
devastating heartbreaks, each one reflective of a void I had
been desperately trying to fill with the wrong things.

My search for home took me on a journey that I now see
echoed in Angela’s story. My hope is that you will see at least
part of your own story, and that you will be encouraged in
knowing that through whatever pain we must endure, there is
help and healing available.

Angela Donnelly raised her face to the rain. The water
stung her eyes, but she blinked through it and fought back
tears. The lights of Manhattan towered high above her, drifting
endlessly toward a black sky.

The rain and the bone-rattling chill were drastically
different from the place she had just left. The harsh reality of
nature and the splatter of passing cars were a welcomed change
to the soft melodies and gentle light of the restaurant. This cold
tempest suited her mood better, she mused as she lifted a hand
to hail a cab and the wind whipped around her legs.

She braced as a cab pulled up to the curb and splashed
water over her shoes and pant legs. Water dripped off her
ruined suit and onto the vinyl seat as she slid into the back, the
delicate fabric clinging to her legs. She yanked the door shut.

“Where to?” The driver snapped.
“Fifth Avenue and Tenth Street.”
“What you doin’ out without a umbrella?” He shook his

head and maneuvered into traffic.

Angela back leaned against the seat and watched the rain
bead up on the window and then wash away in rivulets. “Oh,
is it raining?” she quipped. “I hadn’t noticed.”

For Your Eyes Only by Ben Macintyre
Hecate's Own: Heart's Desire, Book 2 by Unknown
Disobeying the Marshal by Lauri Robinson
Three Kings, One Night (Lost Kings MC #2.5) by Autumn Jones Lake
All She Ever Wanted by Barbara Freethy
Fraser 03 - Highland Homecoming by B. J. Scott
Soft Targets by John Gilstrap
Out of the Dark by Quinn Loftis
Cold is the Sea by Edward L. Beach
Unraveling You 03 Awakening You by Jessica Sorensen
Our partner