Read Heart of the Exiled Online

Heart of the Exiled 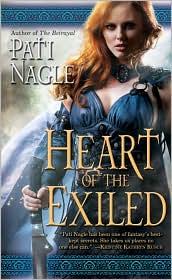 Praise for the novels of
Pati Nagle

“For too long, Pati Nagle has been one of fantasy’s best-kept secrets.
Heart of the Exiled
should let the rest of the world know what some of us have known for a long time: Pati Nagle has an incredibly original voice. She takes us places that no one else can.”

“In
The Betrayal
, Pati Nagle creates a magical world where the bright elves and their peaceful society are threatened by a darkly twisted new breed of elves who are as tragic as they are dangerous. Hope lies with a pair of young lovers joined by a powerful and unsettling magical bond. Lyrical and deeply romantic,
The Betrayal
is an enthralling read.”

—
Albuquerque Journal, on The Betrayal

“Pati Nagle has created a world and culture that play with elvish and vampiric themes in a fresh way. That freshness, combined with interesting characters and a fast-paced story, makes
The Betrayal
an entertaining read.”

—A
NNE
B
ISHOP
,
author of
Tangled Webs

“A rich, intriguing novel,
The Betrayal
presents a multifaceted tale loaded with everything a dedicated fantasy reader could desire. The complex political and social dynamic that binds the sylvan ælven to their tainted alben kin introduces a conflict of truly epic proportions.”

“Readers of fantasy romance will love this new addition to the genre.”

—Romance Reviews Today, on
The Betrayal

—Coffee Time Romance, on
The Betrayal

BLOOD OF THE KINDRED
Heart of the Exiled
The Betrayal

Heart of the Exiled
is a work of fiction. Names, characters, places, and incidents are the products of the author’s imagination or are used fictitiously. Any resemblance to actual events, locales, or persons, living or dead, is entirely coincidental.

D
EL
R
EY
is a registered trademark and the Del Rey colophon is a trademark of Random House, Inc.

To Jane and Jim
faithful friends these many years

Heartfelt thanks to all who helped bring the ælven to life: my editors Liz Scheier and Kaitlin Heller; Betsy Mitchell (ældar of publishing); readers Peggy Whitmore, Sally Gwylan, D. Lynn Smith, Pari Noskin Taichert, and Jerry Weinberg; my beloved spouse Chris; and all the folks who came to the ælven photo shoot. You are the magic.

Share with your kindred, for kindness serves also the giver
.

Always remember the power we hold in our hands
.

Keep to your path though the storm of disaster may threaten
.

Find your way back, when you falter, and seek to atone
.

—Creed of the Ælven, second stave

Eliani gazed at the snow-capped peaks to the northwest, though she knew that one day’s travel was not enough to bring her within sight of Midrange Peak. Riding as swiftly as the horses could bear, they might hope to reach Midrange on the third or fourth day.

Her thoughts flew to the pass there, where not long since she had stood looking down at an army of kobalen gathering on the plains west of the mountains. Remembered dread at that discovery filled her heart.

Only once before had kobalen massed in such great numbers: the Midrange War, five centuries since. A battle loomed, one that Eliani must take care to avoid.

She frowned, torn between a wish to raise her sword in defense of ælven lands and the knowledge that she had a more important task. Only she could perform it, and so she must avoid being caught in the fighting. She must hasten north as swiftly as possible, hoping to get beyond Midrange before the kobalen came through the pass.

Her mare balked, catching her anxious mood. She stroked its neck to soothe it, then turned to the captain of her escort.

“A gallop, Vanorin? Let them stretch their legs before nightfall?”

The captain gazed back, his dark Greenglen eyes and pale hair reminding her of her newly handfasted partner, Turisan. “A brief gallop. These mounts must last us to Highstone.”

Eliani’s mare tossed its head, and she tightened the rein a little to curb it. “The outpost at Midrange might be able to give us fresh horses.”

“We cannot rely on that.”

Eliani shrugged. “A gallop will not ruin them. It is not long until sunset.”

The sun was indeed westering, and deep blue shadows were rising up the slopes of the Ebon Mountains to their left. The party would soon have to stop for the night.

Having heard no outright objection from Vanorin, Eliani drew her mount to the outside of the road and with a loose rein invited it to run. The mare obliged eagerly, and the others followed.

Twenty-one horses thundered northward behind her. Eliani grinned, reveling in the wind that whipped at her hair, the sharp chill of winter in her nostrils.

For a short time she held the lead; then Vanorin and two others of the Southfæld Guard passed her. She felt an urge to race them, to fight her way to the fore again, but she knew they had moved ahead only to protect her.

A roan gelding drew up beside her. She risked a glance at its rider, Luruthin: her clan-brother, onetime playfellow, first lover. His green eyes flashed at her in glee. She shifted her gaze back to the road ahead, her heart uneasy. She knew Luruthin had been disappointed by her handfasting with Turisan, though he seemed to bear it well. A part of her felt regret for ending his hopes. Granted, she had done nothing to
encourage them for two decades, but Luruthin was her kin, and she still cared for him very much.

Startled, she jerked upright, unintentionally tightening her reins. Her mount reared, nearly colliding with Luruthin’s. Shouts of alarm rose behind them, and Eliani’s horse, nervous already, chose to bolt.

The mare left the road, running instead on the verge that banked the Silverwash, passing Vanorin and the other guardians as if fleeing from attack. The animal’s hooves flew over the dry grass. The river flashed by on her right, much too near for comfort.

The horse had its neck stretched nearly flat, ignoring Eliani’s attempts to rein it in. She kept low over its withers, clinging with her knees.

Khi. Use khi to calm it.

She dared not loosen her hold on the reins but pressed her fisted hands against the horse’s neck and concentrated on blending her own khi with the animal’s. As she opened her awareness, she felt its terror, the blind fear that told it to run, and had to calm her own response.

Focusing on her soul’s center, she brought her khi forward, filling her mind with a white-gold glow of peace. Gently, she sent this into the animal’s thoughts, turning them to comfort, to safety, warm pasture, and the company of other horses. Safe in the herd, no danger. The mare’s panic ebbed, and Eliani breathed relief as it slowed to an easier lope.

Hoofbeats pounded behind her. She took the reins in one hand and held up the other hand in warning; she had no wish for the mare to be startled again.
Vanorin’s voice called out, and the riders behind her dropped back, allowing her room to bring her wayward mount to a halt.

The mare slowed to a trot, then a walk, then stopped, its sides heaving. Eliani found she was breathing nearly as hard.

She patted the animal’s neck. “That was a better run than I expected of you. I should enter you in the festival races next spring.”

The horse blew and turned its head toward the river. Eliani dismounted, seeking the comfort of standing on the ground. Her hands shook a little as she drew the reins over the mare’s head. She stroked the satiny neck, feeling the heat beneath the mare’s golden coat.

Vanorin and a handful of guardians rode up to her at a walk. The mare greeted the other horses with a whinny, then nuzzled one of them.