Read Heart of the Incubus Online

Heart of the Incubus 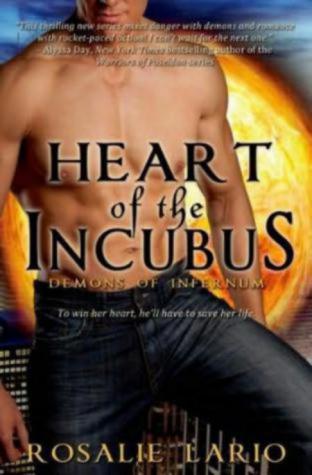 The Demons of Infernum series

Blood of the Demon

Mark of the Sylph

Touch of the Angel

Heart of the Incubus

Call of the Siren

Copyright © 2012 by Rosalie Lario. All rights reserved, including the right to reproduce, distribute, or transmit in any form or by any means. For information regarding subsidiary rights, please contact the Publisher.

The author acknowledges the copyrighted or trademarked status and trademark owners of the following wordmarks mentioned in this work of fiction: BMW 3 Series, Gucci, Four Seasons, WWE.

To Mami, this one’s for you.

Cresso would be the first to admit, he had it bad. Somehow he’d gone and done the unthinkable. The idiotic.

He had fallen in love.

Outside the three-paned window in his living room, the first stirrings of bright green blossomed on the trees. Birds chirped sweetly in anticipation of the coming spring season. Normally it would’ve been a beautiful view. But for him, it might as well have been the dead of winter. At least that would’ve matched the funk he hadn’t been able to shake since the holidays.

After a lifetime of living the way he desired, of having his pick of women, one had finally gotten under his skin. The worst part was that she wanted nothing to do with him. In fact, she seemed to hate his guts.

And what the hell was he doing anyway, moping around his living room and staring at trees? Just a prime example of how royally fucked up he’d been lately.

You’re acting like a prepubescent girl with her first crush. Get over it.

He pushed away from the window and grabbed the briefcase resting on one of his overstuffed cream chairs, then made his way to the door and down the lift of his Mayfair apartment building.

“Morning, Dr. Taylor, sir.” The porter straightened as Cresso passed him in the opulent lobby, on his way to the underground garage that housed his car. Even though the porter’s words and actions were respectful, there was rancor in his eyes and his tone held a note of bitterness. The proper British porter detested him. He had from the moment Cresso had moved into this building several months ago. What would he think if he learned Cresso wasn’t one of those
crass
Americans
, as he assumed, but a species from a whole other dimension?

Cresso stifled a smirk. The porter was obvious in his disapproval of the succubi Cresso consorted with. Personally, Cresso thought the man was jealous. He clearly needed to get laid more often.

Hmm…maybe I should mention it to Samantha or Vanessa.
Now that succubi and incubi could safely mate with other species without killing them, he had a feeling one or both of them would be more than willing to test his theory.

Once inside his gray BMW 3 Series, he braced himself for the half-hour drive to Elcorp Laboratory, the research facility funded by the Elden Council. Since the council, which governed travel between the dimensions, kept the lab in operation, the majority of the work was focused on better integrating Otherworlders into human society. In the three years that Cresso had worked there, his mission had been to discover a cure for the toxic compound sex demons secreted during sex. While he hadn’t quite done that, last month he had invented a vaccine that, when injected regularly, neutralized the effect of the toxin. In doing so he’d helped out an old friend, a half demon named Ronin, and the succubus he’d fallen in love with.

Almost there.
So, so close.

Once he found a cure, his promise to his mother would be fulfilled. And then maybe his stepfather’s death wouldn’t have been in vain.

After pulling up to the state-of-the-art facility located on the outskirts of London, Cresso parked his car and exited. He slid his identification card through the entry slot located at the entrance and stepped into the institutional building. His footsteps echoed on the polished concrete as he headed toward the gray-marbled guard desk.

“Morning, Will,” he said to the guard, a large, stocky man who appeared fully human but was actually a lion-shifter. Very few humans worked here at Elcorp, but even those Otherworlders who lacked human features glamoured themselves to escape notice from the outside world.

“Morning, Dr. Taylor.” Will took his identification card and slid it through the machine in front of him, motioning for Cresso to place his thumb on the fingerprinting pad. It beeped and Will handed the card back to him. “Have a good one.”

“Thanks.” He stepped past the desk and started toward the lift when Will called out to him.

Cresso paused and turned to face him.

“I found this outside when I did my rounds a few minutes ago. Since you’re going to the same floor, would you mind giving this to Dr. Russell?”

Cresso stiffened at the mention of her name.
Dr. Genevieve Russell
.

The brilliant human scientist who had a touch of magic in her blood. Her ability to sense the chemical composition of both natural and artificial products made her the perfect chemical analyst and a top recruit for Elcorp Laboratory. Last month she’d helped him replicate an essential ingredient for his vaccination, something he’d discovered in the blood of one of his close friends’ wives, the descendant of a man who’d been immune to the toxins sex demons secreted. Most recently Genevieve had been working on creating an oral supplement that mimicked the nutrient composition found in skin, so that flesh-eating species such as maliki demons didn’t have to resort to killing in order to feed.

Genevieve was also the very person Cresso
didn’t
want to see right now. Every time she was near, his heart raced and his incubus allure oozed from his pores without any control on his part. That would surely earn him at least one sour look from her.

No bones about it, unrequited love was a bitch.

When Will lowered the package in his hand, confusion creeping into his eyes, Cresso forced a smile to his face. He couldn’t very well refuse to deliver it. Not only would that have been rude, but it would’ve raised too many questions. The last thing he wanted was his coworkers learning how he truly felt about the alluring Dr. Russell. Even worse, to have
her
catch on. “No problem.”

He took the package and headed toward the lift. Tom, the building’s maintenance man, stood nearby, wiping down the wall of mirrors next to the lift. When he saw Cresso, he hit the up button for him. “Morning, Dr. Taylor.”

“Morning, Tom. Thanks.” Cresso entered and pressed the button for the fourth floor, which housed the demon research section. The door slid open to reveal a long hallway lined with metal doors on each side.

Cresso’s office was all the way at the end of the hall to his right, across from the small snack room that serviced this floor. He turned left instead and walked along the polished concrete until he reached Genevieve’s laboratory. He peeked through the window, part of him hoping she wasn’t inside. But then, luck had deserted him months ago…at least when it came to
her.

Her body was turned partially away from him, only her profile visible. As always, she was stunning. Her shoulder-length, curly blond hair was tugged back into a messy ponytail, and her wire-rimmed glasses rode low on her upturned nose. Though she was tall, her frame boasted generous curves. For some reason she insisted on hiding them under boring, confining suits and her tightly buttoned lab coat.

Genevieve was the epitome of the sexy scientist, all the more striking because she seemed to have no freaking clue just how attractive she was.

She stared into her microscope and her nose wrinkled in concentration. In response, something fluttered inside his chest.

Stupid
. He was so idiotic, mooning after her when she had no interest in him whatsoever. But much as he tried to fight it, his dumb heart seemed fully intent on gifting itself to her. If she knew it, she would no doubt crush him like a bug.

As if she sensed his presence, Genevieve’s body stiffened and she straightened. When she turned toward him, her gorgeous green eyes darkened behind her glasses and her lips puckered as if she’d just tasted something bitter.

Nope, nothing had changed there. Still couldn’t stand him.

When she turned back to her microscope—clearly, his dismissal—he mentally braced himself to enter her laboratory.

Time to put the mask back in place.
To pretend he was the same carefree incubus she’d met when she first started working here one year ago.

Anything else would be suicidal.

The day had started out normally enough for Genevieve. She’d risen early, exercised on her elliptical machine, eaten breakfast, and then left the relative comfort of her North Kensington house. After her walk to the station, she’d caught the tube in to work, where, as usual, she’d been the first to arrive.

Because everyone else has a life, Gen.

Whatever. She had her science. So far it had been the only thing in her life that hadn’t let her down.

The supplement she currently worked on had to have the exact nutrient composition as flesh or it wouldn’t work for maliki purposes—and her gift wasn’t that precise. Unfortunately she’d figured that part out during her early trial stages.

A History of the Crusades-Vol 2 by Steven Runciman
Witch Twins at Camp Bliss by Adele Griffin
Slaughter on North Lasalle by Robert L. Snow
Wings of Change by Bianca D'Arc
The Purifying Fire: A Planeswalker Novel by Laura Resnick
Date with a Vampire by Raine English
Longarm and the Great Divide by Tabor Evans
Darkness Follows by J.L. Drake
Portrait of a Donor: A Starters Story by Lissa Price
Plush Book 1: A Billionaire Romance by Winters, KB
Our partner