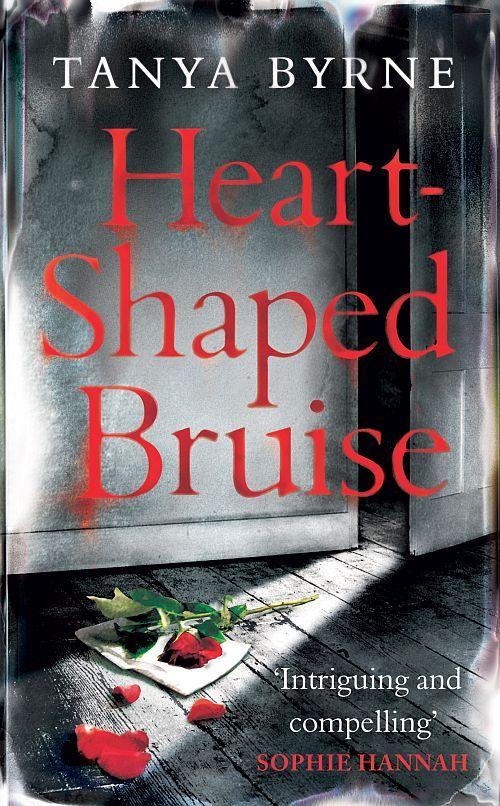 The right of Tanya Byrne to be identified as the Author of the Work has been asserted by her in accordance with the Copyright, Designs and Patents Act 1988.

First published as an Ebook by Headline Publishing Group in 2012

Last year, the psychiatric unit of Archway Young Offenders Institution was closed. A notebook was found in one of the rooms. The contents are as follows . . .

The police. The newspapers. The girls from school who sigh on the six o’clock news and say they always knew there was something not quite right about me.

And everyone believes it. Including you.

But you don’t know.

You don’t know who I used to be. Who I could have been.

Sometimes I wonder if I’ll ever shake off my mistakes or if I’ll just carry them around with me forever like a bunch of red balloons.

Awaiting trial at Archway Young Offenders Institution, Emily Koll is going to tell her side of the story for the first time.

Heart-Shaped Bruise
is a compulsive and moving novel about infamy, identity and how far a person might go to seek revenge.

Tanya Byrne was born in London and studied in Surrey, where she still lives with her cat who goes by several names, none of which he actually answers to. After eight years working for BBC Radio, she left to write her debut novel,
Heart-Shaped Bruise
. She has a weakness for boys with guitars, drinks far too much tea and even though her mother tells her not to, she always talks to strangers.

Tanya is currently working on her second novel.

For Jacob. Reach for the sky.

I know you’ve been waiting three months for this letter, but I have to start by saying that this isn’t an apology. I’m not sorry. I’m not. If I have to spend the rest of my life crossing that word out of every dictionary I find, I will. So, if that’s what you’ve been waiting for me to say, why you keep writing to me, stop reading now.

This is the only letter I’m going to write you, and the only reason I’m writing it is because you keep asking me why I did what I did. I guess you don’t believe them when they say that I’m out of my mind. I don’t know. I might be. My normal and everyone else’s normal isn’t the same any more. Mine is out of time, like I’m a record playing at the wrong speed or something. That’s why I’m letting them do this to me, why I swallow their
pills and sit here, scratching my sins into the walls.

But that’s not why I did it. You must know that, otherwise you wouldn’t be asking. So, okay, you want to know why? This is why: you stabbed my father. That’s it. What don’t you understand? China shop rules, Juliet: you break it, you pay for it, and you broke me. You got what you deserved.

That was the only thing I was supposed to write in this notebook. When Doctor Gilyard gave it to me yesterday, she told me to write the letter to Juliet and give it back when I was ready.

I was going to, but, earlier, while I was hiding a cigarette on top of my wardrobe, I found a letter to someone called Will. I know I shouldn’t have, but I read it and –
my heart
. I didn’t think it still worked, but I felt it again, all hot and red and heavy in my chest.

I don’t know why the letter is still here; it’s in an envelope with the address on it and everything. Maybe the girl who wrote it – Sonia, who loves Will, and slept in this bed before me – forgot to take it with her when she left. Or maybe she was too scared to send it. I’m not. That’s the first thing I’m going to do
when I get out of here, because Will, whoever he is, deserves to know how much he’s loved.

God knows, no one will ever love me like that. Not now.

So I found Will’s letter on top of the wardrobe and you found this notebook there, too, and that’s the way it should be, I think. Everywhere I go I try to leave a piece of myself behind. I’ll never be lost because there are bits of me scattered all over London; compliments written on the back of Starbucks receipts, secrets scribbled in public toilets. It’s like I’m everywhere, all at once. Waitresses will think of me and smile. Bathroom walls will remember me. I’ll live for ever.

You should try it – leave something on top of the wardrobe before you go. If there’s something you want to say to someone but you can’t, write it down and leave it behind for someone else to read. That’s why I’m writing this now. It’s easier this way, kind of like how you can tell the stranger sitting next to you on the bus all of your secrets, but you can’t tell your best friend because best friends never forget.

So, here we go, I’ll be me and you be the stranger on the bus.

As for what you do with this notebook, that’s up to you. Tell the nurses, tell Doctor Gilyard. I don’t care. You can even put it back on top of the wardrobe and pretend you never saw it if you want. But I need to say this, to be rid of it. I can’t keep carrying it around with me; I’m buckling under the weight of it. I look at myself sometimes, at the broken lines across the palms of my hands and the creases in my elbows, and I can see myself coming apart at the seams.

Like today, with Doctor Gilyard. I never speak first. Never.
I’ve seen her once a week since I got here and I haven’t said a word without being prompted. But this morning, I sat down and before she even opened her notebook, I said: ‘I know what you think of me.’

It came from nowhere, I swear. For a moment I thought I meant it, that I’d turned the corner she’d been dragging me towards. But then she took her glasses off and as she did, I saw her fingers flutter and I realised that I did that to her – I did that – and some imbalance in the universe tipped back in my direction.

‘What do I think of you, Emily?’ she asked, but it was too late, the moment was gone; I’d faltered, but I’d still scored the first point.

It was cruel, I suppose. She must have thought it was a breakthrough because I watched her cheeks go pink as she waited for me to respond. I wonder if she was holding her breath, hoping that I would finally collapse into a broken, sobbing heap at her feet. But I turned my face away.

My fingers curled around the arms of the chair. ‘Can I smoke?’

‘Do you have any cigarettes?’

My life is a song I listen to on repeat.

I think I’m supposed to find it comforting, the consistency of it all. This is normal, I’m told. This is what normal teenage girls do – they sleep for eight hours and take their make-up off every night. They don’t call their mates for a chat at 3 a.m.

That’s all normal is, you know, a habit I have to relearn.

Crazy is a habit I have to break.

‘You used to let me smoke.’

She did, when I first got here and we would sit in her office for hours – hours and hours – suffocating on the silence. She would put the box on the coffee table between us and she wouldn’t say anything, but I knew that if I said something, I could have one. So I would tell her things, tiny things. Cigarette-long confessions to distract her from the things I didn’t want her to write in that notebook of hers.

‘I don’t have any cigarettes, Emily.’

I stood up then. I do that a lot, walk around her office. It’s as though I have to see everything, touch everything. Trail my fingers along her desk and over the books on her shelf as though I’m counting each one.

‘Is this what’s wrong with me?’ I asked her during our first
session, plucking a textbook on adolescent schizophrenia off the shelf and holding it up. ‘Am I mad?’

When she didn’t respond, I put it back, next to a textbook on sleeping disorders before moving along the row. ‘How about this?’ I said, pulling out another and looking at the cover. ‘
Personality Disorders: A Practical Guide
.’ I glanced across the office at her, but she just lifted her chin, her shoulders perfectly still and straight.

I began flicking through the book, stopping at a chapter about borderline personality disorder. ‘This could be me,’ I told her as I read the symptoms. ‘My emotions go up and down, don’t they? Me and every other teenage girl. I guess we’re all nutters.’

When I turned to her with a smug smile, she nodded. ‘Why don’t you read the rest?’

I looked down at the page –
difficulty in making and maintaining relationships . . . unstable sense of identity . . . taking risks without thinking about the consequences
– and snapped the book shut. ‘Nah. It’s boring. Got anything with vampires in it?’

Doctor Gilyard just smiled. And she just smiled today as I walked over to her desk and began opening the drawers. There was nothing in the first one; a few Biros, a neon-pink highlighter. There was a silver tube of hand cream in the second one and I stopped and stared at it. I couldn’t picture Doctor Gilyard doing something as normal as using hand cream. In fact, I don’t think I’ve even seen her stand up. In my head, when I leave her office, she sits there until I go back in the following week. She
doesn’t leave. She doesn’t walk or eat or worry about what to wear in the morning.