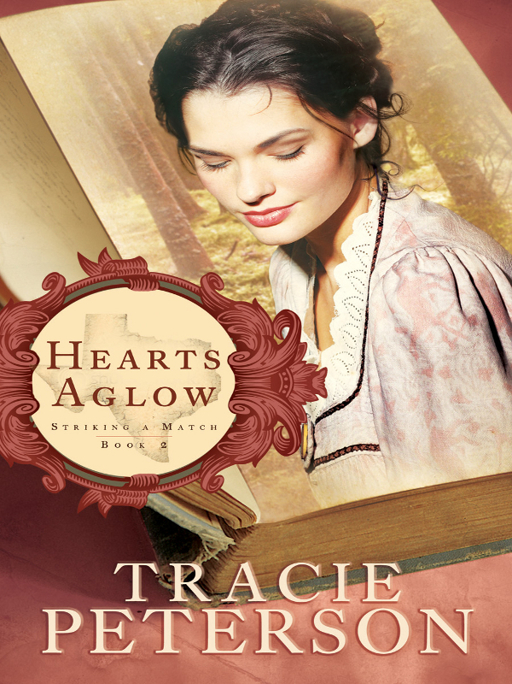 Scripture quotations are from the King James Version of the Bible, and from the HOLY BIBLE, NEW INTERNATIONAL VERSION.® Copyright © 1973, 1978, 1984 Biblica. Used by permission of Zondervan. All rights reserved.

To Jonathan Gerlund and the folks
at the Diboll History Center,
Diboll, Texas,
with gratitude for your help
with this project.

A special thanks to Emily
for reading the story for accuracy.

At the sound of her mother’s frantic voice, Deborah instantly awoke, bolting up from her bed as if the quilt itself were on fire. Her mother crossed the room – a lamp in one hand, Deborah’s robe in the other.

“Sissy? But why? What’s wrong?” Deborah pulled on the old dressing gown and tightened the sash.

A moment of silence hung heavily between the two women. “She’s . . . been attacked.”

Deborah met her mother’s worried expression, illuminated by the lamp she held. The single light gave Euphanel’s face an eerie, unnatural glow. “Attacked? By animals?” Deborah felt her heart pick up its pace; dread pulsated through her veins. “What time is it? When did this happen?”

“Two, or thereabouts. Just come with me and you’ll see for yourself. She’s been wounded, and since you’ve been studying with Dr. Clayton, I thought you could help.”

Deborah nodded and followed her mother. Downstairs she could hear Sissy wailing and the voices of Lizzie and G.W. trying to calm her. What in the world had happened? Deborah saw her brother’s form heading out the back door just as she arrived in the kitchen.

Sissy sat on a ladder-backed kitchen chair. Her normally rich brown skin was now a sickly sort of gray, and blood streaked her skin and clothes. Deborah rushed to her side and assessed her wounds. The worst was a deep gash on the side of her head.

The woman rocked back and forth while Deborah carefully examined her. She noted a swollen eye, cut lip, and numerous scratches. But it was the nasty head wound that held Deborah’s attention.

Her sister-in-law brought a basin of warm water and several towels. “Best as we’ve been able to understand, some men came to the house threatening David and George. I sent G.W. for the doctor. They’re going to stop by the Jackson cabin first and then come here,” Lizzie said.

“The White Hand of God?” Deborah asked, looking to her mother.

“G.W. said it’s a group of white men who go about with their faces covered so no one knows who they are. They cause trouble for folks of color, but of late it’s gotten more violent.”

Deborah shook her head and took up a towel. Dipping it in the water, she began to clean the head wound. “How did they do this to you, Sissy?”

“A big fella done hit me with the butt of his rifle,” Sissy said. She looked to Deborah’s mother. “You s’pose Mr. Arjan and Mr. Rob will get there in time to he’p my boys?”

“I’m sure they’ll do what they can,” Mother replied. She looked over Sissy’s head to Deborah. “For now, let us tend to your wounds and get you safely in bed.”

Deborah nodded and rinsed the bloody towel in the basin. “Mother, please get me the scissors. I need to trim back some of Sissy’s hair from the wound site.” She looked at the older woman and bent close to her face. “I’ll not cut away too much of your covering glory.” She gave the woman a sad smile. Sissy had helped Deborah dress her hair many times, always reminding her that Brother Paul in the Bible called a woman’s hair her covering – her glory. Sissy didn’t so much as try to respond.

Mother handed her the scissors and shook her head. “I just don’t know what kind of men would do such a thing.”

“Hate-filled ones,” Lizzie replied. “Only bitter and hateful people could even consider hurting another human being in such a way.”

“Right after the War Between the States, there were such heinous groups – men who would kill Negroes just for the right to say they’d done it,” Mother replied. “The government had to step in and make laws to keep such things from happening – not that it was very effective in some areas. I have often prayed that such things would come to an end, but I suppose they never will – at least not in my lifetime.”

“It is hard to rid the world of hate,” Deborah said, carefully trimming the wooly hair. The wound was deep and splayed out in jagged tears. Sissy had lost a lot of blood; no doubt the woman was in shock. “I think it would be best if we could put Sissy to bed and get her feet up. I can tend her there.” Deborah stepped back and seriously considered whether the older woman could even walk.

“Sissy, you can’t do anything down here that you can’t do upstairs in bed. Prayer is the best thing any of us can do.” Euphanel gave the woman a tender smile. “Your husband wouldn’t want you refusing treatment on his account.”

“Mother is right,” Deborah replied in a soothing fashion. She gave Sissy’s head a gentle stroke as she looked for any wounds she might have missed.

“Let’s put her upstairs in my bed,” Mother declared. She reached for her friend’s left arm while Deborah put the scissors aside and put her arm around Sissy from the right. A moan escaped the injured woman’s lips.

“I’m feelin’ a mite poorly,” Sissy murmured. Her knees seemed to buckle with every step. “They kicked me pretty good.”

“Oh, Sissy! What a horrible way to treat such a gentle soul,” Mother said, tears running down her cheeks.

“They weren’t thinkin’ of me as havin’ a soul, Miz Euphanel – they said I was no better than an old cur. An old cur . . . what had turned on his master.”

She staggered and fell against Deborah, exhausted. She’d walked the entire way from her cabin to the Vandermarks’, in the deep of night, injured. The poor woman likely struggled through the woods to reach them, for she would have been too afraid of her attackers to take the easier roadway.

Lizzie led the way with a lighted lamp, while Deborah and Mother mostly carried Sissy up the stairs. Lizzie opened the door to Mother’s bedroom and they guided Sissy to the recently vacated bed. Mother left to light another lamp. “It’s cold in here,” she said with a backward glance. “I’d best stoke up the fire.”

“I wish you wouldn’t fuss so,” Sissy said, looking to Deborah. “It’s George and David I’s worried ’bout. These old scratches ain’t gonna hurt me none.”

“Your wounds are more than mere scratches,” Deborah told the older woman.

“I’m sure the men will help them,” Mother said in confidence. But Deborah could see her mother’s concern for the men’s safety. Trouble had been brewing for months in their little community, and stories from surrounding counties didn’t sound much better. It was hard to imagine where it was all headed.

“The boys are in God’s hands,” Mother added, but Sissy never heard. She had mercifully surrendered to unconsciousness.

By the time Arjan and Rob arrived at the Jackson cabin, the attackers were long gone and the house was on fire – clearly too far gone to save. Rob immediately caught sight of the ghostly apparitions hanging from the front oak tree.

“They hanged ’em,” he said, urging his horse forward. He came to where David’s body swayed ever so slightly from a hastily fashioned noose. Flames from the burning cabin gave enough light to show that the man had been badly beaten before being strung up. David’s arms hung at awkward angles, leaving little doubt they’d been broken. Just beyond David was his father. The place where his face once had been was now nothing more than a mass of blood and mangled flesh.

Rob looked away as his stomach tightened. His uncle said nothing, but it was clear he was equally disturbed. There was no shame in being sickened over such a sight. He was glad supper had been some hours before, or he’d certainly have lost it at this scene. Surely only the monsters who’d done this evil could look upon it and not feel the effects.

“Let’s get them down. We can’t save the house,” Arjan said, coming alongside Rob. He handed Rob the reins to his horse and climbed down. “Thankfully the cabin is in the clearing and there isn’t any wind. I’m thinkin’ it won’t catch to the trees.”

“I ain’t never seen anything like this,” Rob admitted.