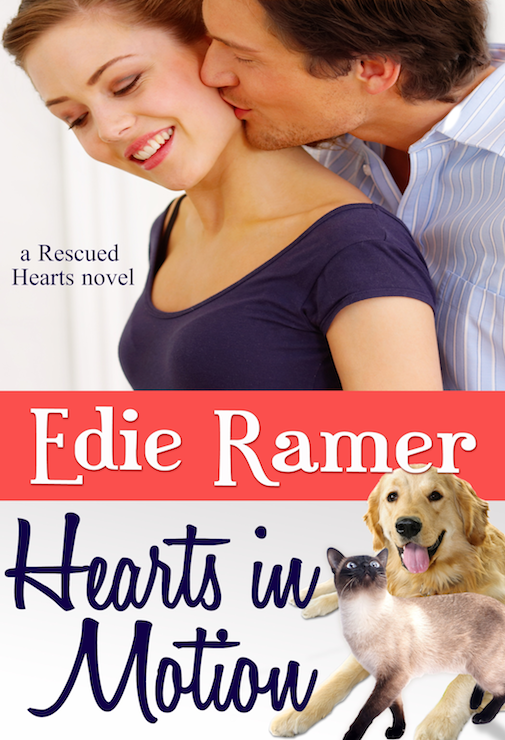 All rights reserved by author

The characters and events portrayed in this book are fictitious. Any similarities to real persons, living or dead, are coincidental and not intended by the author.

No part of this book may be used or reproduced in any manner, including the Internet, without written permission from the author except for brief quotations in critical articles and reviews.

Take two cats, a dog, and a determined woman...

Animal lover Abby Pimm isn’t looking for love. With two rescue cats, one rescue dog, a struggling business, and her fourteen-year-old sister to raise, she’s got her hands full.
What she needs is an angel—though she’ll settle for the devil if he’ll invest in her fledgling company and keep it afloat.

Wealthy businessman Holden Ramsay is no devil. He’s doing all the right things, and when he’s forced to care for his ex’s six-year-old daughter, he ends up hiring Abby as a temporary sitter—a woman who lights up his damaged heart, and perks up other organs as well. A woman who might be his redemption...or his downfall.

The animals that Abby rescued think maybe it’s time they do a little rescue work of their own
—
because sometimes humans in love can be so dense...

Abby Pimm knew every day mattered...but today mattered more. Panting from exertion and excitement, she lifted two pieces of cat furniture into the back of her SUV. After making sure they wouldn’t fall, she dashed into the house to grab her tote and kiss each of the cats goodbye—her own two and her foster kitten. When she kissed her golden retriever, he returned the favor with a sloppy, smelly tongue swipe on her chin.

“I’ll be back soon,” she said. “And everything will be all right for us.”

Then she raced to the SUV, jumped in, and fired up the engine, thinking that everything
had
to be all right.

Anything could happen today, good or bad, and this was one time she’d better not screw anything up.

Are we going to starve?
Epic, the white kitten who was too small and too thin and too nervous, asked. She was backed up to the couch, ready to dart behind it.
Is she going to come back? Is she going to forget about us?

Perched on top of the wall-climbing cat ladder, Quigley made an impatient mewl. He was young and sleek and adventuresome, his black fur shining. He’d been brought to Mom for fostering as a newborn with his mom and his two brothers. When he wasn’t adopted after a month, Mom had kept him, and he only knew the comfort of Mom’s home. The assurance that he was loved.

Minnie tilted her head and her ears. She was the oldest and the one who knew the world the best.

Outside of their home, it was a bad place. A very bad place.

Cars tried to run you over.

Mean dogs tried to bite you.

People yelled at you.

She was alive today because Mom had saved her. Mom had run into traffic and scooped her up when she’d been too small and weak to squirm away. She’d cried over her as she’d taken her into her car. She’d cried all the way home. She’d fed her tuna, and she’d given her water.

And most of all, she’d loved her.

“I’ll take care of you,” she’d whispered. “You’re my kitten now, and I won’t let anything bad happen to you.”

It was a long time ago, long before Quigley came to live with them, but Minnie had never forgotten.

Don’t worry about Mom going away,
Lion, the big, goofy dog said.
If any bad people come, I’ll protect you.

Quigley flicked his tail.
Lion will lick the bad people to death.

Minnie leaped up to her seat on the windowsill and looked outside. Mom would figure out a way to take care of them. Mom always did. For a human, she was small. But cats knew it wasn’t the inches that counted.

Mom’s almost as smart as me
, she said.

Lion lifted his head.
And almost as loving as me.

But she can’t jump like me,
Quigley bragged then took a flying leap to the couch.

Maybe not,
Lion said,
but she’s the one who feeds you.

The kitten made a distressed cry. Minnie gave Lion and Quigley a sharp look then turned her back on them, jumped to the floor, and padded over to Epic to rub her chin on the small head.

Lion climbed onto the couch, where he wasn’t allowed when Mom was home. He curled up to sleep.

Not a bad idea.
I know what we should do,
Minnie said to Epic, who peered up at her with big eyes, not saying anything.

Sleep.
She jumped on the couch, on the other end from Lion. Two of the walls had trees with perches built for them, but they weren’t big enough for cuddling. She glanced down at Epic.
Can you jump up?

Epic hopped up. Fell. Hopped up again. Fell. The next time she stared for a moment before doing it the right way, taking into account the muscle power needed for the distance. Then her back legs bent...and she sprang up, landing next to Minnie and squeaking her surprise that she’d made it.

Minnie stretched out and the kitten settled next to her, her body quaking. Minnie put her front paws around Epic. A movement on the couch told Minnie that Quigley was settling down, too.

Mom will fix everything.
Minnie patted the side of Epic’s face.
Everything will be all right.

And if Mom couldn’t do it herself, they would have to help her.

Epic stopped trembling, her body relaxing, her soft breaths even with sleep. Minnie pressed her face against the back of the kitten’s head. Right now a sunbeam formed a large rectangle of light on the couch, she was surrounded by warm bodies, her tummy was full, and she was going to do what all cats did during times like this.

Close her eyes and nap.

Lion greeted Abby at the back door. She dropped to her knees and hugged him, holding on tightly, needing his steady warmth and caring. He pushed the side of his head against her neck, as if he knew she needed comforting.

Sometimes she thought she screwed up everything she touched.

Her sister’s life was so different from Abby’s at the same age. Abby had had more clothes, more money, more house, more security...more love.

It wasn’t all her fault, but that didn’t take away the tight knot of failure in her gut.

Right now only money would untie that knot.

In the hall behind him, Quigley and Minnie stared at her, though they usually napped during midday. It felt to Abby as if they knew how important the meeting had been.

As if they knew she hadn’t been able to convince the two women and three men to finance her start-up company.

That was crazy thinking. There was no way they could know.

She sniffed in her tears, dropped a kiss on Lion’s head, then rose to her feet. She smiled at the cats even though her cheek muscles hurt.

“One door closed,” she said, practicing for when Grace came home from school. “But it’s all right.” She straightened her shoulders and set her jaw, feeling her eyes burn and her determination rise.

Besides, there was still the one way they could keep going. It was a way she hated, but she would not allow this defeat to stop her. She would
not
give up.

“There will be another door.” This time the words rang out.

Quigley made an odd growling sound.

They both stared at her.

“Whatever it takes to walk through it.” She was tired of failure. Sick to her stomach of it. She needed to succeed for Grace, for her business partner, for her cats, for her dog...and for herself.

She clenched her hands into fists. Pouring passion and determination into her voice, she added, “Even if I need to take an axe to it.”

In his aunt Daisy’s colorful condo, Holden Ramsay determined he would make everything work in the next two weeks.

Make it work for the 435 employees who were employed by his company.

And maybe more important, for the blond six-year-old with the sad blue eyes who was gaping at the zigzag wood sculpture/cat ladder/bookcase that took up one wall of Daisy’s living room.

“They dropped her off at your house and
ran
?” Daisy asked in what for her was a low voice, not seeming to notice how her voice carried.

Seated on a blue-striped chair, Holden Ramsay glanced at the small child who didn’t look anything like him. She didn’t appear to have heard his aunt, her head tilted up as she stared at the brown tabby curled on the top perch.

He glanced back to his aunt Daisy, sitting on her lime-green sofa, and he recalled when he was a child and her apartment had reminded him of an ice cream shop in a picture book. In most ways she was still the energetic aunt who’d scooped him out of his grandparents’ dreary home once a week when he was a kid, promising to take him somewhere fun. But though her backbone was as stiff as ever, her hair was pure white now instead of dark brown like his, and the skin on her pronounced Ramsay chin sagged a bit.

He’d aged, too. Thirty-two, though for the past three years he’d been written up in the business pages as “the young CEO and president of Eagleton Furniture.” Sometimes Holden felt as if the business weighed him down like the world on Atlas’s shoulders.

“I don’t want to talk about her grandparents,” he said. Not here, where the girl might overhear. He’d told Daisy the bare bones on the phone before he and Cara had driven over. How his ex’s parents had dropped the girl off at his house at nine last night, informed him that their daughter had flown to Europe with her new lover who didn’t want kids around, and the girl’s nanny had stolen from them—the umpteenth nanny that hadn’t worked out—and it was about time he took care of his own child.

If she had been his child, he would never have let Juliana take her away.

At the time, he was doing Juliana a favor, letting her parents believe he was Cara’s father in return for an uncontested divorce. But as soon as he talked to Juliana, that had to change.

“Juliana’s parents said she would be back in two weeks,” he said. “This will be over soon.”

Images ran through his mind of the night before. Night hadn’t quite fallen, the sky the color of dusk—the time of day when things didn’t appear quite real, even with the lights on his front door and the garage illuminating the driveway of his lakeside home. Maybe that’s what had made his former father-in-law, a husky Palm Beach real estate broker who prided himself on sealing the deal, pick the girl up and thrust her into his chest.

Holden had automatically grabbed her before she fell onto the hard concrete of the front porch.