Read Heaven Beside You Online 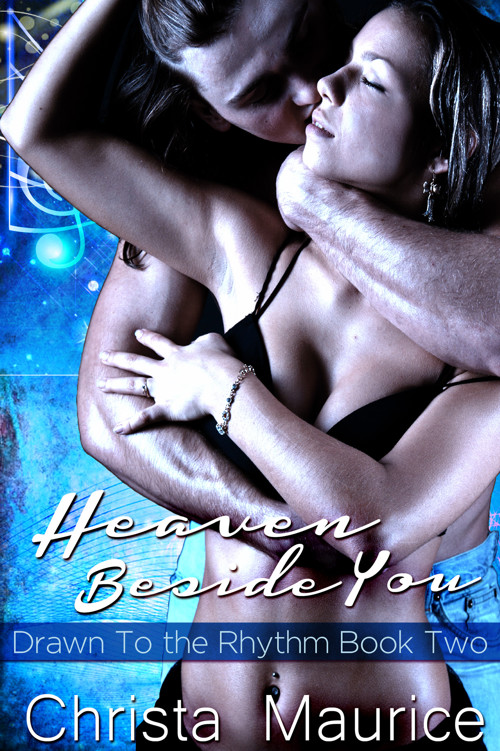 Half the year, Cassandra Geoffrey runs In The Pines Campground, and spends the other half alone on a West Virginia mountain. She’s not completely happy with the situation, but she loves her wacky, close-knit hometown. Besides, the man of her dreams isn’t likely to appear anytime soon—until Jason Callisto, lead guitarist for Touchstone, her ultimate fantasy crush, shows up. At her campground. It’s gotta be fate.

After being dumped by his supermodel girlfriend, Jason has been impossible to live with. Now he’s been exiled by his manager to West Virginia, before he breaks up the band on the eve of the Grammys. Clearly, Jason is Cass’s adventure of a lifetime. To him, she’s just an ego boost….Or is she? With so much at stake, can they take a risk and reach for more?

Drawn to the Rhythm Series

One Ring to Rule

Drawn to the Rhythm Series

To Def Leppard for the album Slang, which I listened to on repeat for most of the writing and editing of this book.

Cassandra grabbed her phone before it rang a second time. Her printer spit out expense reports as she tucked the phone between her ear and her shoulder. “Hello?”

“Cass, I stopped at your parents and they said you’d gone up the mountain early.”

“I have an off-season guest coming. Don’t worry, Finn. I’ll have my taxes to you in plenty of time.” If only he had a body and personality to match that exotic name, but he’d spent most of his life training to be as boring as possible. The rest of the time he spent pursuing her. He never seemed to realize one goal was in total opposition to the other.

Good? He was her accountant. Timely submission of her paperwork should have been important to him.

“You have a guest coming? Now?”

“Don’t worry, Finn. I’m not going to change my season.” Cass glanced out the window for headlights. The guest’s plane should have landed at Pittsburgh hours ago. He could be here anytime. If it was a he. The name J.P. Barnswallow didn’t give much of a hint except that it sounded fake. The setting sun reflected off the snow, gilding the world. “This is my vacation, but the money went to my brain.”

“It’s practically done now. That program you recommended is great. Thanks.”

“Yeah, good.” Finn sounded less than happy about his recommendation.

“Well, thanks for the call, Finn, but I want to get back to this and my guest should be here soon. So I’ll talk to you in a week.”

“Give me a call and we can have lunch at Ida’s.”

Cass cringed. Lunch with Finn? She could predict what he would have based on the day. Of course, all she had to do was tell her parents and they would show up to run interference. Paul would be there too, and the food would be excellent. “Sure, Finn. See you then.”

Cass hung up and studied the computer screen. She’d been on the phone long enough for her screen saver to start up. Someday she had to grow up and take the Jason Callisto slide show off instead of continuing to update it. That day wasn’t going to be today. She admired the shot from Aspen where he was wearing his long black wool coat, no skis in sight, and moved the mouse when it started to disintegrate. Three more reports, and she could clip everything together and stuff it in an envelope for Finn.

Lights splashed across the wall beside her. She jumped and peered out the window.

A black Cadillac pulled into the parking space closest to her door. The rental agency had either not known their car was headed into the mountains or had been too busy talking the customer out of a sports car. Hopefully the fault lay with the agent because she had no desire to deal with a difficult guest.

She pulled on her coat and tugged her hair out of the collar. Scooping up the cabin keys, she walked to the front door. How had she allowed herself to be conned into renting out a cabin during her off-season? Money notwithstanding, this was her vacation.

Cass stopped in the open door, letting all her heat out.

Her guest slammed the door of the rental car, stomping his feet to get the feeling back. She’d recognized his lean six-foot-one frame and long black hair before he’d stopped rubbing his eyes and confirmed he was indeed Jason Callisto, guitarist from Touchstone. He wore a long black wool coat just like the one he’d had on in the Aspen picture, black gloves and trademark black Converse sneakers, making him appear longer and sexier than she’d ever imagined. She didn’t need to see his whiskey brown eyes to know it was him.

He squinted at her. “Are you the owner of this place?”

“Yes,” she squeaked. Her breath log-jammed in her lungs around the vicinity of her heart, which wanted to pound right out of her chest.

The office booking the cabin should have warned her so she would have time to prepare. But how could they know she’d be more dumbfounded by the sight of Jason Callisto on her doorstep than anybody else in the world, past or present, real or fictional?

Okay, fictional might have thrown her, but she would have been able to breathe if Ishmael had appeared on her doorstep claiming to need a break from hunting the white whale. To be honest, preparation would have consisted of a lot of semi-hysterical gibbering. One does not prepare for the appearance of one’s long term, unattainable lust on one’s literal doorstep. One merely hopes not to make a fool of oneself in the impossible event it should happen.

Okay, time to stop squeaking, start speaking in complete sentences, and not let her knees unhinge.

“I guess I’ve got a cabin reserved here for the next two weeks,” he told her, staring at the tall pines and firs surrounding the cabin. His voice was richer than she expected, like digital recording couldn’t quite capture its depth.

Cass clutched her parka closed. She wasn’t dressed to meet Jason Callisto. Her usual ensemble of baggy jeans and faded sweatshirt did not suit the guest. And she didn’t own a red carpet or anything.

She swallowed. “Sure, I’ve got your keys here. It’s the one with the shutters off the windows.” She was missing something but couldn’t place it. What was it? Give him the keys, show him his cabin...one more step. Five years of campground ownership and suddenly she couldn’t remember her job. “Oh, I need to have you sign some papers.”

“Can we do it inside? It’s fuckin’ cold out here.” He started toward the door.

Cass stumbled backward, holding out the keys like she would a cross to ward off a vampire. Bringing him into the office would almost be like letting him into her house. Could she invite him in without serious repercussions? Or was it too late for that? What would those repercussions be? She hadn’t cleaned the office since fall. It was dusty. Did he care if the office was dusty? “Here’s the cabin key. You’ll see it, it’s the only one open.”

“The one with the shutters off the windows. I remember. Thanks.” He snagged the keys without touching her hand and dropped them in his pocket as he followed her through the door. His dark eyes were smudged with something weightier than simple fatigue and the corners of his sensual mouth drooped. At least, compared to magazine pictures.

Cass turned to the counter where she’d laid out all her paperwork in anticipation. Good thing too, she’d have never remembered what she needed if it hadn’t been. “Normally I would have a schedule of events, but there aren’t any this time of year. It’s just you and me up here,” she babbled. “There’s some stuff that goes on down in town if you’re interested.”

Cass pushed her hair off her face and wondered what his comment meant. She’d gotten past her shock enough to hear his tone of voice. He sounded worn out and miserable. Adding that to the darkness in his eyes and the cant of his mouth, the sum came up unhappy. People often showed up at her door tired and cranky. That was why they went on vacation. If his idea of a vacation was hiding out on a mountain in January, then the crowded airport was way more than he could handle. Especially since he couldn’t be cranky without having it wind up in
People
magazine. “Long flight?”

Last spring, Touchstone had released a blockbuster album heralded as their comeback. His band had spent all summer and fall touring. The summer before that, they’d been on hiatus and he’d released a solo album, which had been pretty awful.

Cass bit her lip.
People
magazine. Two years ago in the Valentine’s issue there had been an article on famous love affairs. His three-year relationship with supermodel Stella Marina had been in the “
Over
” side bar. Stella had since been in several high profile romances. Jason had not. If Duke would move those magazines away from the checkout she wouldn’t study them so religiously, but then she also wouldn’t have a file of the best ones under her bed, including the fateful
People
. Should she say something, or pretend his life wasn’t all over the gossip magazines? “Well, I’m sure I can put together a marshmallow roast if you’re interested.”

He smiled, but it didn’t quite make it to his eyes. “I’ll let you know. Right now, I just want to get warmed up. The heater wasn’t so great in the rental.”

“I turned up the heat in your cabin yesterday, so it should be nice and toasty. And there’s a fire laid. All you need to do is light it and add wood when it gets going. There’s a woodpile beside the cabin too. Should be enough to keep you for your stay.” Cass wrung her hands.

“Great. What about dinner?” Jason ran his fingers through his hair. He’d probably intended to put it in better order. Instead he’d managed to make it even more mussed and sexy.

Trying to loosen her throat before she started squeaking again, she swallowed. “Dinner?”

Cass bit her lip again and his eyes followed the action. Before Stella, Jason had been quite the Romeo. He’d wined and dined the most beautiful women in Hollywood and every one of them had claimed he could melt them with a look. She didn’t need any more melting. “Everybody brings their own food.”

To Dream of the Dead by Phil Rickman
Night Diver: A Novel by Elizabeth Lowell
The Heretic's Apprentice by Ellis Peters
Katya's War (Russalka Chronicles) by Howard, Jonathan L
Vampire Food 08: He Smelled Like Peach Pie by Kat Barrett
Mum on the Run by Fiona Gibson
Slaves of Elysium by W. S. Antony
Death and Deceit by Carol Marlene Smith
When One Man Dies by Dave White
Stuff My Stocking: M-M Romance Stories that are Nice and Naughty by Various Authors
Our partner