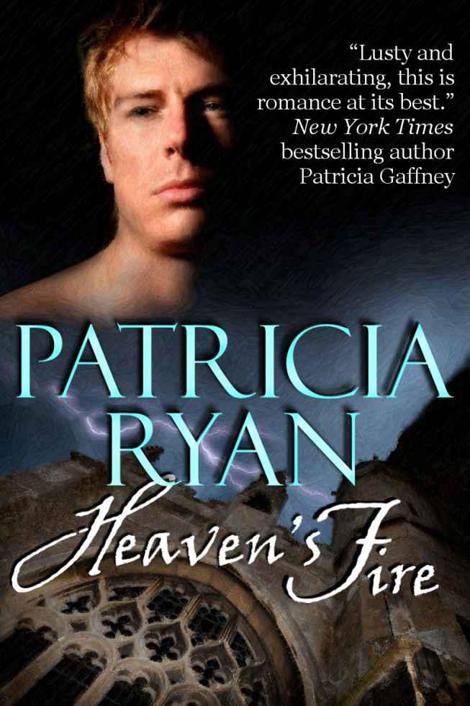 “Lusty and exhilarating, this is medieval romance at its best.
Heaven’s Fire
is a splendid tale, and Patricia Ryan is a writer to watch.”
New York Times
bestselling author Patricia Gaffney

Copyright © 1996 Patricia Ryan. All rights reserved. With the exception of quotes used in reviews, this book may not be reproduced or used in whole or in part by any means existing without written permission from the author.

In loving memory of my father, Dan Lacy Burford, an enlightened man of learning who would have felt right at home in medieval Oxford.

Heartfelt thanks to Kelly Cannizzaro for being such a good friend and sharing so generously of her medical expertise.

Thanks also to Dr. Joan Chisolm for her very creative help with some of the medical aspects of this story.

As always, I owe a debt of gratitude to my critique partners, Kathy Schaefer and Rina Najman; and to my twin sister, best friend, and most ruthless editor, Pamela Burford.

Finally, thank you, Leah Bassoff and Audrey LaFehr, for your vision and enthusiasm.

A cool suspense from pleasure and from pain;

Thy life a long, dead calm of fix’d repose;

No pulse that riots, and no blood that glows.

Still as the sea, ‘ere winds were taught to blow,

Soft as the slumbers of a saint forgiv’n,

And mild as opening gleams of promis’d heav’n.

Come Abelard! for what hast thou to dread?

The torch of Venus burns not for the dead;

From “Eloisa to Abelard,”

The village of Cuxham in Oxfordshire, England

“Why’d you have to die, Sully?” Constance whispered to her husband as she bent her head to the task of sewing him into his shroud. “You weren’t all
that
old.”

Old enough, though. Close to sixty, if she had to guess, which made him old enough to be her grandfather. Nevertheless, it had been something of a cruel surprise to wake up that morning and discover his lifeless body in bed next to her. She couldn’t begin to guess what malady had claimed him during the night. The world harbored countless mysterious ills. No one could be expected to comprehend all of them.

Constance didn’t understand, but she did grieve—not only for Sully, but for herself. As she patiently worked the needle in and out of the heavy linen, she pondered the matter of her uncertain fate. What would become of her, now that Sully was gone? Pausing in her labor, she stretched her back and gazed around at the interior of the humble cottage in which she had spent the past two of her eighteen years, wedded to the village smithy.

The deerskin tacked over the doorway flew open, and Constance blinked at the stout figure silhouetted against the afternoon sun. It was the reeve’s wife, an amiable woman of middle years. Her breath came in harsh gasps. “Constance! Run!”

“Now!” Ella yanked Constance from her stool and pushed her toward the doorway. “Sir Roger’s coming for you!”

“Dear God.” The young widow crossed herself. “Already? Sully’s not even in his grave.”

“The old swine’s not wasting any time. He told Hugh he let you slip through his fingers once, and he don’t mean to let it happen again.”

“Is he on foot or horseback?” Constance asked, her heart tripping in her chest.

“Horseback,” said Ella, “with rope to tie you up if you resist him. Go! If you follow the stream and run north through the woods, toward Oxford—”

“It won’t work, Ella. You know that. Even if I could make it as far as Oxford, he’ll have me found and brought back. You’ve seen what happens to the ones who’ve tried to escape. You’ve seen what they look like when they come back.”

Ella shivered and looked away. Runaways were always returned in the dead of night, and always mutilated to one degree or another—especially the women.

“I’m quite fond of my eyes and my tongue,” Constance said. “I’ve no desire to lose them.”

“Kill myself? Nay, ‘twould bring too much satisfaction to Sir Roger.”

“Satisfaction? He wants to lie with you, not bury you.”

“Aye, but the priests say you’re damned to hell if you take your own life, and Sir Roger thinks every word out of a priest’s mouth is the voice of God Himself.”

Ella nodded. “True enough. From the way he acts with Father Osred, I’d say he’s scared to death of the old hen.”

Constance pondered that for a moment, and an idea began to take shape in her mind.

“Aye.” She took her friend’s hands and nodded toward her late husband, laid out on the bed in his half-sewn shroud. “If you’ll stay and tend to Sully.”

Constance kissed Ella on the cheek, then left the cottage and began walking purposefully to the south.

“Not that way!” Ella shouted from the doorway. “North, through the woods. Hurry!”

Constance did hurry—she ran, in fact—but not to the north. She raced on quaking legs to the rectory, praying that Father Osred would be home when she got there.

From the moment Constance had blossomed into womanhood at the advanced age of sixteen, Sir Roger Foliot had made no secret of his intention to bed her. The fat petty knight saw his villeins as naught but chattel, the males to be worked to early graves, the females—if they were comely—to amuse him in his bed and bear his bastards, be they willing or not. Moreover, it was whispered that he took pleasure from giving pain, and considering the bruised faces and vacant stares of the women he used, Constance had little doubt that this was true.

It was to escape Sir Roger’s attentions that she had married Sully Smith, at the insistence of her father as he lay on his deathbed with a fever of the chest.

“Sir Roger’s a loathsome creature, but he respects marriage,” her father had counseled. “He fears the Church and reveres its sacraments. Marry Sully, and Sir Roger will leave you be.”

And it had worked. But now Sully was dead, and Roger Foliot was coming for her.

As she approached the rectory, a thatched stone dwelling behind the church, she became aware of distant hoofbeats. Turning, she saw Sir Roger, mounted on his big black gelding, following her at a gallop.

“Father Osred!” she screamed, beating on the door with her fists. “Father Osred, let me in!”

The door swung open and she fell, gasping for air, into the arms of the elderly rector. “Constance! Easy, child.”

“Sir Roger!” She slammed the door closed and shoved the bolt across with trembling hands. “He couldn’t even wait till Sully was in the ground.”

She grabbed fistfuls of his black robe and drilled her gaze into his. “Help me, Father. Please. Don’t let him take me.”

The old man shook his head and tried to pry Constance’s fingers loose, but she was too strong, and held on.

“Child, please,” he implored. “I don’t have as much influence with Sir Roger as people think. Even if I could send him away now, he’d come for you tonight—”

“Then let me stay here with you.”

“He wouldn’t take me from under your very roof—I’m sure of it. I could keep house for you, like Maida did.” Father Osred’s housekeeper had died on All Saints’ Day of a tiny scratch on her foot that had festered and poisoned her blood.

A furious pounding shook the front door. “Let me in!” bellowed Sir Roger from the other side—in French, of course. To Constance’s knowledge, he’d never learned a word of his villeins’ language. “Come now, Constance. Don’t make me tie you up.”

The priest backed up, but Constance didn’t let go. “‘Twould anger Sir Roger something fierce,” he said. “He’d know I was taking you in just to protect you from him.”

More thunderous battering on the door; the old man flinched.

“What of it?” Constance challenged. “He’s afraid of you.”

Father Osred shook his head. “He’s afraid of Hell, my dear. I must tread cautiously with Roger Foliot. The day I push him too far is the day he demands a more compliant parish priest. I’m an old man. What would become of me if I had to leave Cuxham?”

“Constance!” screamed Sir Roger. “Don’t make me break this door down and take you by force!”

“Please, Father,” she begged. “Let me stay. I’ll serve you well. I swear it. I’ll do everything Maida used to do.”

The old priest looked down at her, his eyes lighting with sudden interest. “Everything?”

“Yes, of course. Everything. Can I stay?”

He held her at arm’s length and inspected her slowly, head to toe. She wished she had bothered to comb and braid her hair that morning. Hanging to her knees in an inky black tangle, it gave her an unkempt air, hardly what a respected rector would seek in a housekeeper. Worse yet, she still had on the ragged old kirtle in which she had washed Sully’s body and prepared it for burial. Her heart sank as she noticed his attention linger wherever the damp wool clung to her slender frame.

He met her gaze again, his eyes glittering darkly. For a moment she was confused, but when he nodded and said, “Yes—you may stay,” she grabbed his hands and kissed them.

“Thank you, Father. Thank you!”

The priest motioned for her to stand behind him, and then unbolted and opened the door. Constance peeked over his shoulder to see Roger Foliot’s obese, brocade-clad form filling the doorway. He stood with hands on hips, a coil of rope looped around one wrist, glowering like an enraged bear. “Give her over, Father.”

The rector’s back stiffened. He made his reply in stony French, which Constance could follow passably well. “I’m sorry I can’t oblige you, Sir Roger. Perhaps you weren’t aware, but young Constance has consented to take over my cooking and cleaning, now that Maida has departed from this world.” He somberly crossed himself.

Sir Roger frowned, his mouth agape. As ever, Constance was struck by how very much his face resembled a pan of bread dough, fully risen and waiting to be punched down. His dark little eyes narrowed until they were barely visible within the surrounding pink flesh. “What wicked scheme is this, Father? I claimed her first, and by God’s Eyes I mean to—”