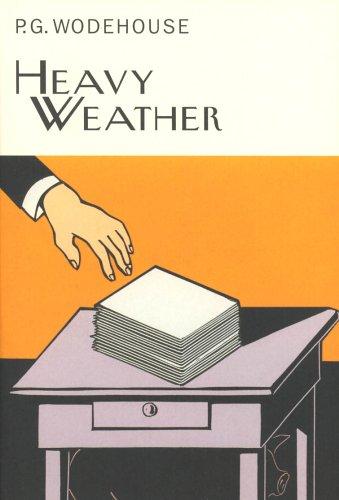 SUMMARY:
Fans of P. G. Wodehouse's comic genius are legion, and their devotion to his masterful command of the hilarity borders on an obsession. It's Heavy Weather for Lord Emsworth and the Empress, especially with the appalling Sir Gregory Parsloe-Parsloe snooping around with designs on the prize pig.

Made and printed in Great Britain by

This book is sold subject to the condition that it shall not, by way of trade or otherwise, be lent, re-sold, hired out, or otherwise circulated without the publisher's prior consent in any form of binding or cover other than that in which it is published and without a similar condition including this condition being imposed on the subsequent purchaser

Sunshine pierced the haze that enveloped London. It came down Fleet Street, turned to the right, stopped at the premises of the Mammoth Publishing Company, and, entering through an upper window, beamed pleasantly upon Lord Tilbury, founder and proprietor of that vast factory of popular literature, as he sat reading the batch of weekly papers which his secretary had placed on the desk for his inspection. Among the secrets of this great man's success was the fact that he kept a personal eye on all the firm's products.

Considering what a pleasant rarity sunshine in London is, one might have expected the man behind the Mammoth to beam back. Instead, he merely pressed the buzzer. His secretary appeared. He pointed silently. The secretary drew the shade, and the sunshine, having called without an appointment, was excluded.

'A Lady Julia Fish has just rung up on the telephone.' 'Well?'

' She says she would like to see you this morning.'

The secretary withdrew. Lord Tilbury returned to his reading.

The particular periodical which had happened to come to hand was the current number of that admirable children's paper,
Tiny Tots,
and for some moments he scanned its pages with an attempt at his usual conscientious thoroughness. But it was plain that his heart was not in his work. The Adventures of Pinky, Winky, and Pop in Slumberland made little impression upon him. He passed on to a thoughtful article by Laura J. Smedley on what a wee girlie can do to help mother, but it was evident that for once Laura J. had failed to grip. Presently with a grunt he threw the paper down and for the third time since it had arrived by the morning post picked up a letter which lay on the desk. He already knew it by heart, so there was no real necessity for him to read it again, but the human tendency to twist the knife in the wound is universal.

It was a brief letter. Its writer's eighteenth-century ancestors, who believed in filling their twelve sheets when they took pen in hand, would have winced at the sight of it. But for all its brevity it had ruined Lord Tilbury's day.

It ran as follows:

Enclosed find cheque for the ad
vance you paid me on those Remi
niscences of mine.

I have been thinking it over, and have decided not to publish them, after all.

'Cor!' said Lord Tilbury, an ejaculation to which he was much addicted in times of mental stress.

He rose from his chair and began to pace the room. Always Napoleonic of aspect, being short and square and stumpy and about twenty-five pounds overweight, he looked now like a Napoleon taking his morning walk at St Helena.

And yet, oddly enough, there were men in England who would have whooped with joy at the sight of that letter. Some of them might even have gone to the length of lighting bonfires and roasting oxen whole for the tenantry about it. Those few words over that signature would have spread happiness in every county from Cumberland to Cornwall. So true is it that in this world everything depends on the point of view.

When, some months before, the news had got about that the

Hon. Galahad Threepwood, brother of the Earl of Emsworth and as sprightly an old gentleman as was ever thrown out of a Victorian music-hall, was engaged in writing the recollections of his colourful career as a man about town in the nineties, the shock to the many now highly respectable members of the governing classes who in their hot youth had shared it was severe. All over the country decorous Dukes and steady Viscounts, who had once sown wild oats in the society of the young Galahad, sat quivering in their slippers at the thought of what long-cupboarded skeletons those Reminiscences might disclose.

They knew their Gal
ly, and their imagination allowed them to picture with a crystal clearness the sort of book he would be likely to produce. It would, they felt in their ageing bones, be essentially one of those of which the critics say 'A veritable storehouse of diverting anecdote.' To not a few - Lord Emsworth's nearest neighbour, Sir Gregory Parsloe-Parsloe of Matchingham Hall, was one of them - it was as if the Recording Angel had suddenly decided to rush into print.

Lord Tilbury, however, had looked on the thing from a different angle. He knew - no man better - what big money there was in this type of literature. The circulation of his nasty little paper,
Society Spice,
proved that. Even though Percy Pilbeam, its nasty little editor, had handed in his portfolio and gone off to start a Private Inquiry Agency, it was still a gold-mine. He had known
Gally
Threepwood in the old days - not intimately, but quite well enough to cause him now to hasten to acquire all rights to the story of his life, sight unseen. It seemed to him that the book could not fail to be the
succes de scand
ale
of t
he year.

Acute, therefore, as had been the consternation of the Dukes and Viscounts on learning that the dead past was about to be disinterred, it paled in comparison with that of Lord Tilbury on suddenly receiving this intimation that it was not. There is a tender spot in all great men. Achilles had his heel. With Lord Tilbury it was his pocket. He hated to see money get away from him, and out of this book of
Gally
Threepwood's he had been looking forward to making a small fortune.

Little wonder, then, that he mourned and was unable to concentrate on
Tiny Tots.
He was still mourning when his secretary entered bearing a slip of paper.

Lord Tilbury snorted irritably. At a time like this! 'Tell her I'm...'

And then there flashed into his mind a sudden recollection of something he had heard somebody say about this Lady Julia Fish. The words 'Blandings Castle' seemed to be connected with it. He turned to the desk and took up
Debrett’
sPeerage,
searching among the E's for 'Emsworth, Earl of '.

Yes, there it was. Lady Julia Fish had been born Lady Julia Threepwood. She was a sister of the perjured Galahad.

That altered things. Here, he perceived, was an admirable opportunity of working off some o
f his stored-up venom. His know
ledge of life told him that the woman would not be calling unless she wanted to get something out of him. To inform her in person that she was most certainly not going to get it would be balm to his lacerated feelings.

Lady Julia Fish was a handsome middle-aged woman of the large blonde type, of a personality both breezy and commanding. She came into the room a few moments later like a galleon under sail, her resolute chin and her china-blue eyes proclaiming a supreme confidence in her ability to get anything she wanted out of anyone. And Lord Tilbury, having bowed stiffly, stood regarding her with a pop-eyed hostility. Even setting aside her loathsome family connexions, there was a patronizing good humour about her manner which he resented. And certainly, if Lady Julia Fish's manner had a fault, it was that it resembled a little too closely that of the great lady of a village amusedly trying to make friends with the backward child of one of her tenants.

'Well, well, well,' she said, not actually patting Lord Tilbury on the head but conveying the impression that she might see fit to do so at any moment, 'you're looking very bonny. Biarritz did you good.'

Lord Tilbury, with the geniality of a trapped wolf, admitted to being in robust health.

'So this is where you get out all those jolly little papers of yours, is it ? I must say I'm impressed. Quite awe-inspiring, all that ritual on the threshold. Admirals in the Swiss Navy making you fill up forms with your name and business, and small boys in buttons eyeing you as if anything you said might be used in evidence against you.'

' What
is
your business ?' asked Lord Tilbury.

'The practical note!' said Lady Julia, with indulgent approval. 'How stimulating that is. Time is money, and all that. Quite. Well, cutting the preamble, I want a job for Ronnie.'

Lord Tilbury looked like a trapped wolf who had thought as much.

'My son. Didn't you meet him at Biarritz? He was there. Small and pink.'

Lord Tilbury drew in breath for the delivery of the nasty blow. 'I
regret...'

'I know what you're going to say. You're very crowded here. Fearful congestion, and so on. Well, Ronnie won't take up much room. And I shouldn't think he could do any actual harm to a solidly established concern like this. Surely you could let him mess about at
something'!
Why, Sir Gregory Parsloe, our neighbour down in Shropshire, told me that you were employing his nephew, Monty. And while I would be the last woman to claim Ronnie is a mental giant, at least he's brighter than young Monty Bodkin.'

A quiver ran through Lord Tilbury's stocky form. This woman had unbared his secret shame. A man who prided himself on never letting himself be worked for jobs, he had had a few weeks before a brief moment of madness when, under the softening influence of a particularly good public dinner, he had yielded to the request of the banqueter on his left that he should find a place at Tilbury House for his nephew.

'That,' he said tensely, 'has nothing to do with the case.'

'I don't see why. Swallowing camels and straining at gnats is what I should call it.'

'Nothing,' repeated Lord Tilbury,' to do with the case.'

He was beginning to feel that this interview was not working out as he had anticipated. He had meant to be strong, brusque, decisive - the man of iron. And here this woman had got him arguing and explaining - almost in a position of defending himself.

Nuts in the Kitchen by Susan Herrmann Loomis
Voodoo Kiss by Jayde Scott
The Adventures of Flash Jackson by William Kowalski
INDEFENSIBLE: One Lawyer's Journey Into the Inferno of American Justice by Feige, David
The Tenth Cycle: A Thriller (A Rossler Foundation Mystery Book 1) by JC Ryan
No Romance Required by Cari Quinn
Stolen: Hell's Overlords MC by Zoey Parker
The Medium by Noëlle Sickels
Finding Grace by Alyssa Brugman
When Memories Fade by Tyora Moody
Our partner