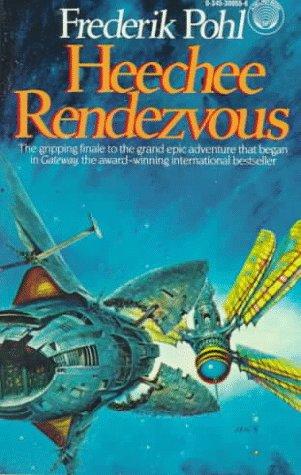 Published in the United States by Ballantine Books, a

division of Random House, Inc., New York, and simultaneously in

For Betty Anne Hull with all the love I have

2 What Happened on Peggy’s Planet
15

8 The Nervous Crew of the Sailboat
46

10 The Place Where the Heechee Dwelt
50

15 Back from the Schwarzschild Discontinuity
.
85

A Chat with My Subset

I am no Hamlet. I’m an attendant lord, though, or at least I would be if I were human. I’m not. I’m a computer program. That is an honorable estate and I am not at all ashamed of it, especially since (as you can see) I am a very sophisticated program, not only fit to swell a progression or start a scene or two but to quote from obscure twentieth-century poets as I tell you about it.

It is to start the scene that I am speaking now. Albert’s my name, and introductions are my game. I start by introducing myself.

I’m a friend of Robinette Broadhead’s. Well, that’s not precisely right; I’m not sure I can claim to be a friend of Robin’s, though I try hard to be a friend to him. It is the purpose for which I (this particular “I”) was created. Basically I am a simple computer information-retrieval construct who (or that) has been programmed with many of the late Albert Einstein’s traits. That’s why Robin calls me Albert. There’s another area of ambiguity. Whether it is indeed Robinette Broadhead who is the object of my friendship has lately become arguable, too, since it rests on the question of who (or what) Robinette Broadhead now is-but that’s a long and hard problem that we’ll have to take up a little bit at a time.

I know this is all confusing, and I can’t help feeling that I’m not doing my job very well, since my job (as I construe it) is to set the scene for what Robin himself has to say. It’s possible I don’t have to do this at all, since you may already know what I have to say. If so, I don’t mind repeating it. We machines are patient. But you might prefer just to skip over and go on to Robin himself-as Robin himself, no doubt, would much prefer.

Let’s do it in the form of questions and answers. I will construct a subset within my program to interview me:

A.-Robin Broadhead is a human being who went to the Gateway asteroid and, by enduring great risks and trauma, won for himself the beginnings of an immense fortune and an even greater load of guilt.

Q.-Don’t throw in those teasers, Albert, just stick to the facts. What is the Gateway asteroid?

A.-It is an artifact left by the Heechee. They abandoned, half a million years or so ago, a sort of orbital parking garage full of working spaceships. They would take you all over the Galaxy, but you couldn’t control where you were going. (For further details see sidebar; I put this in to show you what a truly sophisticated data-retrieval program I really am.)

Q.-Watch that, Albert! Just the facts, please. Who are these Heechee?

A.-Look, let’s get something straight! If “you” are going to ask “me” questions-even if “you” are only a subset of the same program as “me” you have to let me answer them in the best way possible. “Facts” are not enough. “Facts” are what very primitive data-retrieval systems produce. I’m too good to waste on that; I have to give you the background and the surround. For instance, to tell you who the Heechee are the best way, I must tell you the story of how they first appeared on Earth. It goes like this:

The time was about half a million years ago, in the late Pleistocene. The first living terrestrial creature who became aware of their existence was a female saber-toothed tiger. She gave birth to a pair of cubs, licked them over, growled to drive her inquisitive mate away, went to sleep, woke up and found that one was missing. Carnivores don’t –

This is one of the easier kinds of information for me to retrieve:

The conflict over the island of Dominica, terrible though it was, was over in seven weeks with both Haiti and the Dominican Republic anxious for peace and a chance to rebuild their shattered economies. The next crisis to confront the Secretariat was one of great hope for everyone in the world, but at the same time fraught with far more risk to the world’s peace. I refer, of course, to the discovery of the so-called Heechee Asteroid. Although it was known that long ago, technologically advanced aliens had visited the solar system and left some valuable artifacts, the chance finding of this body with its scores of functioning spaceships was wholly unexpected. Their value was incalculable, of course, and nearly every space faring member state of the UN registered some claim to them. I will not speak of the delicate and confidential negotiations that brought about the five-power Gateway Corporation trusteeship, but with its formation, a new era opened for humankind.”

Q.-Albert, please! This is Robinette’s story, not yours, so get on to where he starts talking.

A.-I told you once and I told you twice. If you interrupt again I’ll simply turn you off, subset! We’re doing this my way, and my way is like this:

Carnivores don’t count well, but she was smart enough to know the difference between one and two. Unfortunately for her cub, carnivores have hair-trigger tempers, too. The loss of one cub enraged her, and in her paroxysm of fury she destroyed the other. It is instructive to observe that that was the only fatality among large mammals to result from the first visit of the Heechee to Earth.

A decade later the Heechee came back. They replaced some of the samples they had taken, including a male tiger now elderly and plump, and took a new batch. These were not four-legged. The Heechee had learned to distinguish between one predator and another, and the species they selected this time was a group of shambling, slant-browed, four-foot-high creatures with furry faces and no chins. Their very remote collateral descendants, namely you humans, would call them Australopithecus afarensis~ These the Heechee did not return. From their point of view, these creatures were the terrestrial species most likely to evolve toward intelligence. The Heechee had a use for this sort of animal, and so they began subjecting them to a program designed to force their evolution toward that goal.

Of course, the Heechee did not limit themselves to the planet Earth in their explorations, but none of the rest of the solar system had the sort of treasure that interested them. They looked. They explored Mars and Mercury, skimmed the cloud cover of the gas giants beyond the asteroid ring, observed that Pluto was there but never troubled to visit it, tunneled out an eccentric asteroid to make a sort of hangar for their spacecraft, and honeycombed the planet Venus with well-insulated tunnels. They did not concentrate on Venus because they preferred its climate to that of Earth. Actually they detested the surface of Venus as much as humans do; that was why all their construction was underground. But they built there because there was nothing alive on Venus to be harmed, and the Heechee never, never harmed any evolved living things-except when necessary.

The Heechee did not limit themselves to the Earth’s solar system, either. Their vessels spanned the Galaxy and went beyond it. Of all the Galaxy’s two hundred billion astronomical objects larger than a planet, they charted every one; and many of the smaller ones, too. Not every object was visited by a Heechee ship. But not one failed of at least a drone flyby and an instrumented search for signatures, and some became what can only be called tourist attractions.

Life was rare in the Galaxy. Intelligent life, however inclusively the Heechee defined it, was even rarer ... but not absent. There were Earth’s australopithecines, already tool users, beginning to develop social institutions. There was a promising winged race in what human beings would call the constellation Ophiuchus; a soft-bodied one on a dense, huge planet that circled an F-9 star in Eridanus; four or five miscellaneous sorts of beings that orbited stars on the far side of the Galaxy’s core, hidden by gas clouds, dust, and dense starry clusters from any human observation. All together there were fifteen species of beings, from fifteen different planets thousands of light-years away from each other, that might be expected to develop enough intelligence to write books and build machines fairly soon. (The Heechee defined “fairly soon” as any time within a million years or so.)

And there was more. There were three actual existing technological societies, besides the Heechees’ own, and the artifacts of two others now extinct.

So the australopithecines were not unique. They were still very precious. Therefore the Heechee who was charged with ferrying a colony of them from the dry-bones plains of their native home to the new habitat the Heechee had provided for them in space was accorded much honor for his work.

It was hard work, and prolonged. That particular Heechee was the descendant of three generations who had explored, mapped, and organized the solar system project. He expected that his own descendants would continue the work. In that he was wrong.

All in all, the tenancy of the Heechee in Earth’s solar system lasted just over one hundred years; and then it ended, in less than a month.

A decision was made to withdraw-hurriedly.

All through the rabbit warrens of Venus, all over the small outpost installations on Dione and Mars’ South Polar Cap, in every orbiting artifact, the packing-up began. Hurried but thorough. The Heechee were the neatest of housekeepers. They removed more than ninety-nine percent of the tools, machines, artifacts, knickknacks, and trinkets that had supported their life in Earth’s solar system, even the trash. Especially the trash. Nothing was left by accident. And nothing at all, not even the Heechee equivalent of an empty Coke bottle or a used Kleenex, was left on the surface of the Earth. They did not make it impossible for the collateral descendants of their australopithecines to learn that the Heechee had visited their area. They only made sure that they would first have to learn to go into space to do so. Much of what the Heechee removed was useless and was jettisoned in far interstellar space or into the Sun. Much was shipped to places very far away, for special purposes. And all this was done not just in Earth’s solar system, but everywhere. The Heechee vacuumed the Galaxy of almost every trace. No newly bereft Pennsylvania Dutch widow, preparing to turn the farmhouse over to the family of the eldest son, ever left premises more neat.

The Folded Earth: A Novel by Roy, Anuradha
Floats the Dark Shadow by Yves Fey
Unleashing the Beast by Lacey Thorn
The Doctor Takes a Wife by Laurie Kingery
Where You'll Find Me by Erin Fletcher
Merry Mitchell (Mitchell/Healy Family #3.5) by Jennifer Foor
The Other Man (West Coast Hotwifing) by Haynes, Jasmine, Skully, Jennifer
The Dagger X (The Dagger Chronicles) by Eames, Brian
His Christmas Captive by Caitlin Crews
Marked by Garrett Leigh
Our partner