Heirs of Acadia - 03 - The Noble Fugitive 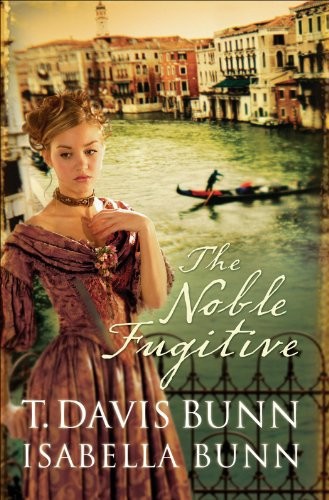 All rights reserved. No part of this publication may be reproduced, stored in a retrieval system, or transmitted in any form or by any means—electronic, mechanical, photocopying, recording, or otherwise—without the prior written permission of the publisher and copyright owners. The only exception is brief quotations in printed reviews.

For all the years of love, encouragement,
and graciousness,
this book is dedicated to

Others Books by Author

The bosun’s whistle piped the darkest hour of the night. Serafina quietly rose from her narrow bed and lit a candle. The world beyond Serafina’s porthole seemed painted with a despair that nearly choked off her breath. Yet not even this could stop her.

Swiftly Serafina donned a modest frock of grayish blue, like the sky before sunrise. The dress was unadorned save for the double row of ivory buttons rising from the matching cloth belt to her neck. She wore no jewels because she had none. She brushed her hair carefully and tied it back in a silk ribbon matching her dress. Her shoes were dark leather and sturdy, but she did not put them on.

She inspected her impression in the tiny mirror attached to the wall above her stateroom basin. She hardly recognized her own face. Somewhere along the way, she had changed. There was a subtle shift in the way she held herself. Her mouth was set in firmer lines. Her eyes no longer seemed to shine as they had before. Serafina turned away with a sigh. There was nothing to be gained by looking back or wishing for events to have been otherwise. They were as they were.

She straightened the bed linens and set the letter for her parents on the pillow. Her determination mingled with the pain she was causing. The words inside the folded paper burned her mind with tragic finality.
I am leaving and will not return
.

Serafina slowly lifted the door latch and slipped from the cabin. Just across the narrow passage were her parents’
quarters. She paused to listen but heard nothing beyond their closed door.

Elsewhere the ship was alive with quiet bustling. She could hear the crew padding about on bare feet. Officers spoke in the hushed tones of people aware that others slept. Serafina carried her shoes in one hand and a small case in the other. Her dark cloak, with the cowl pulled far over her face, hid her slender form and features. She moved swiftly through the passage and up the stairs.

As she stepped out to the deck, a cold wet wind sliced across the waters. She tightened her cloak and pulled the hood down farther. Somewhere far to the southeast, a kindly summer sun rose upon her beloved Venice. Here in the Portsmouth harbor, however, the weather remained chill and damp and hostile.

Fortunately she did not have long to wait.

“All right, missie.” The sailor dropped quietly from the rigging to stand beside her. “Let’s be seeing it.”

Serafina set down her case and fished in the folds of her cloak for the coin. She held out one of the stolen gold ducats where it caught the light. “Just as I promised.”

“It’s smaller than a sovereign, but I reckon it’ll spend good enough.” His hand was black from gripping the tarred ropes. “Let’s be having it, then.”

“When I am on the rowboat and headed to shore.” Serafina made the coin vanish. “That was the agreement.”

“Agreements change,” he said, his grin made evil by the gap where his front teeth should have been.

“Perhaps I should call for an officer.” Her voice sounded much more confident than she felt.

“Do that and you’ll find yourself back in your cabin swift enough,” he hissed, but he also backed off a step. “Then you’ll sail for America with the rest of us.”

Her body felt trapped within talons of fear. But she did not yield. “I will pay only when I am safely on board the small vessel.”

The sailor scowled and wheeled about. “This way, and keep silent.”

Serafina followed the man as he crept around to where the last of the supply boats were moored at the side of the larger ship. Her heart was in her throat, both over the possibility of being spotted and the sailor doing wrong by her. But he moved with catlike swiftness straight for the lower mid-deck, scouting in every direction.

When they arrived he glanced over the railing and whistled once very quietly. Then he stood with hand outstretched.

Serafina glanced doubtfully over the side. The longboat rested calmly in the lee of the sailing ship. Two sailors held the craft steady against the ship’s side and peered up at her. “How am I to get down?” she asked.

“On the sailors’ ladder, and be quick about it.” The sailor unfastened the railing’s catch, swinging one portion out like a waist-high door. He then lifted his curled half fist before her face. “You’ll pay me now.”

She dropped the coin into his palm. Instantly the man whipped about and vanished. Nervously she leaned forward and dropped her case and her shoes to the outstretched hands. The boat seemed very far down from where she stood. A man in the longboat hissed words she did not understand, but the urgency was clear enough. She turned around and gripped the unsteady rope ladder with both hands. Step by tremulous step she eased herself down, the wind catching her skirts with a force that made her gasp.

Somewhere overhead an officer called to his men. Serafina hesitated, fearing the alarm was about to be raised. A pair of hands, tough as old oak, reached up and gripped her calf. She kicked them off. The man below might have chuckled.

She took the ladder’s next rung. The descent seemed to last for ages. Finally her toe touched the boat’s rail, and another hand reached for her arm. This time she allowed herself to be guided onto a plank seat.

As soon as she was settled, the two seamen pushed the
longboat away. The vessel reeked of the load of fresh vegetables that it no doubt had just delivered. They fitted their oars into the locks and pulled hard for land. The man in the bow said softly, “My mate tells me you’ll pay for your passage in gold.”

“A gold ducat when we arrive,” Serafina agreed as she bent to slip into her shoes. She was surprised at how firm and low her voice sounded to her own ears, nothing like the sprightly tone she was accustomed to hearing. The sorrow she carried was no doubt aging her.

“There goes your ship now,” the man said, pointing toward the stern with his chin.

Serafina turned quickly. She stifled a sob at the sight of the sails unfurling and the ship’s anchor creaking up from the seabed. The officers on the foredeck were silhouetted against the first hints of the gray dawn. A bosun piped his mates aloft, as mournful a sound as ever she had heard. Her heart cried out words her mouth could not form, calling for her mother and father. She could watch no longer.

The oarsmen made a swift crossing of the inland harbor, and soon the longboat was fast against the dockside. One man helped her climb onto the stone jetty while another held her case at his side. “Our payment?”

She leaned over to hand him the coin. Half of her money was gone now. “Where can I find a carriage to Bath?” she asked, trying to keep the tremor from her voice.

“Couldn’t say about travel to the Wessex region, missie.” He pointed toward an inn at the harbor’s far end, where light glowed from all the ground-floor windows. “But the post coach for London leaves from there at daybreak.”

She thanked the men and started across the dock. A few workmen were about, rolling giant water casks toward a waiting craft. Otherwise the port was still. Her footsteps echoed loudly off the buildings at the harbor’s edge. Up ahead a horse whinnied as bridles were fitted into place. A pair of gulls traced their way across the gradually strengthening light.
She stopped a moment and watched them soar and swoop off across the water. In the far distance, sails were melting into the sea.

“I have no family and no friends,” she whispered. Her shiver was as much from within as against the cold.

She started up the rocky port lane toward the inn. She did not allow herself to turn again as the ship carrying her parents westward vanished beyond the horizon.

Resolutely she focused upon the lamplight flickering over the inn’s stable doors. Up ahead, her future awaited. As well as her beloved Luca.

Serafina found it very hard to be the youngest. Everyone was always telling her how fortunate she was to be a Gavi, one of the oldest families of Venice. Most left unsaid that her mother was lucky to have become Alessandro Gavi’s second wife. Serafina’s father was one of Venice’s leading
doges
, the merchant families who had ruled the water-bound kingdom for more than a thousand years. Her mother’s family was far less grand. They were mere landholders from the Dolomites. But the year after Alessandro’s first wife had died, he had met the lovely Bettina and married her. Serafina’s father was sixteen years older than her mother. Two of Serafina’s half sisters were already married and had children of their own. They treated Serafina with utter indifference, almost like an unwanted houseguest. But the youngest half sister, Gabriella, was another thing entirely. Gabriella, a few years older than Serafina’s seventeen years, took every opportunity to make life miserable for her.

But Serafina would not have described her life as unhappy. She loved her parents and willingly sought to obey and please them. She loved their villa fronting Venice’s Grand Canal. She could spend hours hanging over her bedroom’s balcony railing, watching the water and the boats and the birds. She particularly loved the sunsets. For she had an artist’s heart, like Luca. And because of Luca she yearned for this sunset most of all.

Serafina sat on the iron bench attached to the wall behind her balcony. Her view was over the Rialto Bridge and the promenade on the canal’s other side. She could hear the crowds and observe the gondoliers setting down their passengers. But she was invisible to those below. Her father was very proud of this protected balcony, sometimes called a widow’s ledge. He claimed it was of Arab design, originally brought
west by the first crusaders. When Serafina had been a child, she had imagined being a damsel trapped in an evil lord’s tower, waiting for her prince to come and rescue her. And now her childish dream was becoming a wondrous reality. She shivered with delicious anticipation.

She leaned over to the balcony’s railing and observed the bolder ladies walking arm in arm with their paramours. The setting sun cast a gemstone glow over all the buildings. Truly she could imagine herself captured within a mythic realm, one from which only a great hero could rescue her. Or a handsome army officer with an artist’s heart. Someone just like Luca.