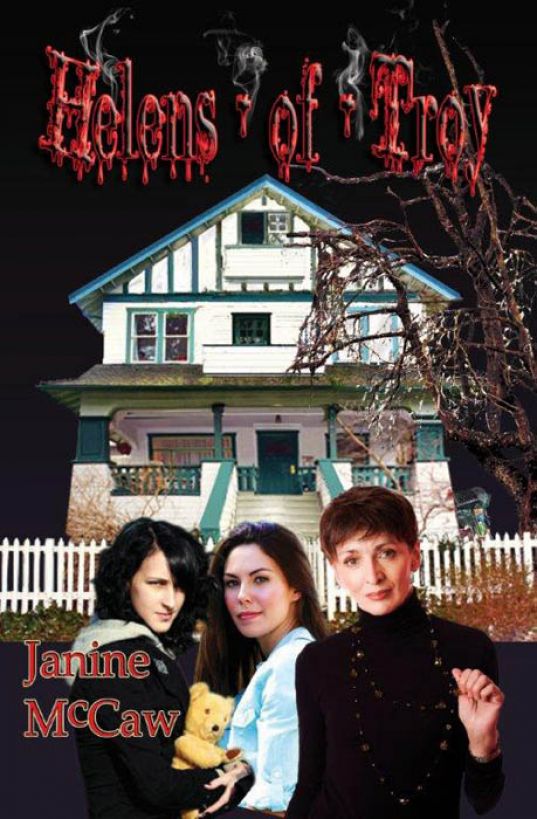 This ebook is licensed for your
personal enjoyment only. This ebook may not be sold or given away
to other people. If you would like to share this book with another
person, please purchase an additional copy for each recipient. If
you’re reading this book and did not purchase it, or it was not
purchased for your use only, then please return to Smashwords.com
and purchase your own copy. Thank you for respecting the hard work
of this author.

Discover other books by the author
at:

WHAT READERS HAVE SAID ABOUT

"My daughter said this rocks which,
presumably, is a good thing." - Jim Darcy

"Awesome! Girls who kick ass and not a
sparkle in sight."- Joanna

"Thank God! Real by-golly power-chicks
fighting the supernatural fight, instead of the usual "fake" ones
serving as props for pretty boys. Thanks for this and your
brilliant dialogue. This one I'll keep coming back
to."-Mephisgirl

"How witty and modern!" -Elizabeth
Wolfe

“You know, we've been thinking about
your work and wondered why you never used the phrase "KILLmore
Girls"? - @necropology - The Madore Brothers.

For my Mom, Delphine — who made me
bacon on a bun every morning before school. The fine-dining
establishment in Troy is named for her.

This book is also written for my
friends, who keep pushing me for another.

The big thanks go to:

Paul Busch, for his encouragement, love
and understanding,

Shelley Grainger for her endless
reading,

Melva McLean, for her endless
knowledge,

Cosmic Debris and Karen Powell for a
couple of great lines,

Randy Eustace-Walden, for finding the
house,

Nick Orchard, for letting me use his
house,

Tom McCaw, for the book
cover,

This book is a work of fiction. All
characters are figments of my imagination. Sometimes they can’t
type, or spell or form proper grammatical sentences. Go
figure.

Helena LaRose dragged the body out of
the house and rolled it up and across the canopied swing on her
front porch. First went the feet, then the torso. By the time she
got to its flailing head, the rules of motion took over, and the
corpse moved itself. Its weight caused the creaky three-seater
bench with the weathered cushions to rock, hitting Helena straight
in the kneecaps as it swung forward.

“Easy there, Sport,” she said, reaching
forward and slowing the swing to a halt. “There will be no swingers
on the porch tonight. I’ve got a reputation to maintain.” If the
corpse was trying to get one more kick at her, it would have to do
better than that.

Taking a step back to observe her
handiwork, Helena knew that something wasn’t quite right in
Deadville. “I should have thought more about this,” she said to
herself, struggling to prop the body upright. “He’s just not a
looker.” His lifeless arms flopped around her, hitting her in the
head. “Son of a bitch,” she sighed.

She brushed back a strand of dark hair
that had fallen in front of her eyes, and put her hands on her hips
in exasperation. Moving cadavers around had certainly been a lot
easier when she was younger.

“Do you need some help there, Helena?”
asked the old man who had been silently viewing the entire scene
from the sidewalk. “I don’t think he’s obeying the laws of physics.
I’m pretty sure dead weight isn’t supposed to move
around.”

She jumped. There was nothing worse
than being caught in the act. She had hoped to keep things
undercover a little longer. Timing never had been her
thing.

She turned and gave her neighbor a wary
smile. “I’m afraid you’re going to have to sit in the rocker today,
Mr. Wagner. I know you’d prefer to stretch out on the swing for a
bit of a rest on your afternoon walk, but it’s occupied at the
moment.”

“So I see,” Mr. Wagner said, taking it
all in stride. He sat down in the pine rocking chair next to his
usual spot. “I guess I could break from my routine just for
today.”

Mr. Wagner glanced at the body and
pouted. “You’ve covered him with my blanket. The one you always
give me to use. Do you think you can get me another one? I’d take
it from him, but there’s just something unsettling about using a
blanket that has covered a dead guy.”

“I’ve got another blanket ready for
you, Mr. Wagner. It’s in the front hall. Cotton. I know wool makes
you itch. The newspaper is there, too. I’ll get them both for
you.”

“Don’t get old, Helena,” he sighed.
“It’s a bitch. Stay young and beautiful like you are.”

Helena laughed. At fifty-eight, she was
hardly young, but there was some kind of ageless beauty about her
that was hard to dismiss.

“Young is a relative thing, but thanks,
Mr. Wagner. How about I put the kettle on for us while I’m
inside?”

“Can I have regular orange pekoe
today?” he pleaded. “None of that herbal stuff?”

“Do you really think you should, Mr.
Wagner? The anti-oxidant level is so much higher in the rooibos I
blended for you.”

“Helena, stop being the naturopath that
you are and give an old man a decent cup of tea. I’ll sign a waiver
if you like. I rely on a little caffeine to keep my eighty-three
year old heart pumping. I like coffee in the morning, tea in the
afternoon and a stiff shot of scotch at night. Write that down in
case your doctor books don’t cover the real secret to a long
life.”

“That won’t be necessary, Mr. Wagner,”
she laughed. “Just don’t let it get around. It’s bad for my
business. I spend a lot of time telling my clients that peppermint
tea is the elixir of life. You’re right though, peppermint schnapps
may be closer to the truth.”

“Absinthe makes the heart grow fonder,”
he winked wryly, smirking at his pun. There was nothing wrong with
Mr. Wagner’s mind. He was sharp as a tack.

Helena watched him stretch his
age-spotted finger in the direction of the body.

“Your man there, he’s got a problem,”
he announced. “His leg has slid down to the floor. They’re the
first things to go, you know. Legs. For me it was the knees. Do you
want me to make him sit up so the kids don’t trip over him later
tonight?”

Helena didn’t hear him. She was staring
towards the house, her mind evidently elsewhere.

“Hello? Earth to HEL-EY-NAH...” he said
slowly, emphasizing each syllable of her name. “I SAID, do you want
me to fix him? Are you going deaf? Do I have to shake you
senseless? That’s what people do to me when I have my hearing aid
turned down too low.”

He tugged at her skirt. A very short
skirt that showed off her magnificently toned legs. He knew that
would get her attention. It certainly got his. He might be an
octogenarian, but certain things still worked. As much as that
thought may have bothered some women—hell, it might have downright
creeped them out—he often flirted with Helena and she didn’t seem
to mind it in the least.

Helena turned her head back towards
him. “I’m so sorry, Mr. Wagner. Honestly, I don’t know where my
head is today. I had all this running around to do this morning,
even before I got started getting the house spooked-out for
tonight. I guess I tired myself out, putting up all the Halloween
decorations. If you could help me with the body, that would be
wonderful.”

“I like the cobwebs you put up. You
didn’t have to buy them though, I have plenty at home I could have
lent you.”

Expecting a witty comeback from her,
Mr. Wagner was concerned when he didn’t get one. “Is everything
okay, Helena?”

She cocked her head slightly and took a
slow look around her front property. “Yes, although the hairs on
the back of my neck seem to be a little over-active today. I can’t
put my finger on why that is. It must just be the occasion. I love
Halloween, don’t you, Mr. Wagner?”

“It’s a lot more fun since you moved
onto the street,” he admitted.

“The house is really going to look
spooky this year. I’ve rented some strobe lights and a fog machine
from a special-fx place in the city. You’ll have to come by and see
it tonight. I think it will be quite something.”

“I’m sure it will be. I’m a big fan of
your Halloween house, you know that,” Mr. Wagner said. “I wouldn’t
miss it for the world.”

“Thanks, Mr. Wagner. I’m just a little
worried. Most of the neighborhood kids are getting older now.
They’re harder to impress.” She looked at her watch. “I thought I’d
be done setting up by now, but Mr. Death-warmed-over, he’s just not
co-operating.”

“That’s better. I thought for a moment
you were losing your sense of humor. If there’s anything else I can
do to help, besides fixing his leg, you just let me know. I’m not
totally feeble. I can still tape up a decoration or
two.”

He stood up and walked over to the
body. The rubber mask that Helena had stuffed for the head was
pretty realistic. Under the shadow of night it was going to be more
so. He noticed the male clothing that she had stuffed to make the
body. It seemed somehow familiar. A twinge of jealousy ran through
his veins. He didn’t like to think about Helena having a
boyfriend.

“Thank you so much, Mr. Wagner,” Helena
sighed. “I don’t know what I’d do without you. See if you can prop
him up a bit while you’re at it. Maybe you can make it look like
he’s watching the kids coming up the stairs. That would be kind of
scary, don’t you think?”

“Oh, I’m sure it will be very scary
tonight,” he agreed.

“I think so too. Now, if you don’t
mind,” she said, walking towards the front door, “I’ve got to go
upstairs and get the rooms ready for my girls. Oh, I haven’t told
you, have I? My daughter and granddaughter are coming tonight to
stay with me for a while. They called late last night and told me.
That’s probably why I’m in such a tizzy. It’s all so sudden. I
haven’t even gotten around to making up their beds yet. Aren’t I
terrible? But don’t worry, I’ll bring you out some sweets in a few
minutes, I promise. You just make yourself at home.”

“The blanket and the paper?” he
reminded her, shaking his head. “I’d actually prefer that to sweets
if you have too many things to remember today.” He started to move
the body on the swing. “I think it looks better lying down,” he
said. “But I’m going to turn him around like you said, so he can
watch the kids coming up the walkway.”

“You are now officially in charge of
the dead guy, Mr. Wagner. That’s one less thing for me to worry
about today. I will entrust you to make it look real.”

“When you’re in your eighties, you get
to be a bit of an expert on dead guys,” he shrugged. “It’s nice
that you’re going to be having some company. I don’t want you to be
lonely.”

Loonglow by Helen Eisenbach
The Color of Love (The Color of Heaven Series) by Julianne MacLean
The Rampant Reaper by Marlys Millhiser
His Perfect Game by Langston, Jenn
Bad Blood by Linda Fairstein
The House on Lake Jasper: A Tilton Chartwell Mystery (Tilton Chartwell Mysteries Book 1) by Anne Kelleher
Echoes Of The Past (Fermosa Bay #1) by Iris Blobel
Demonspawn by Glenn Bullion
Sweet Venom by Tera Lynn Childs
The Devil's Dozen by Katherine Ramsland
Our partner