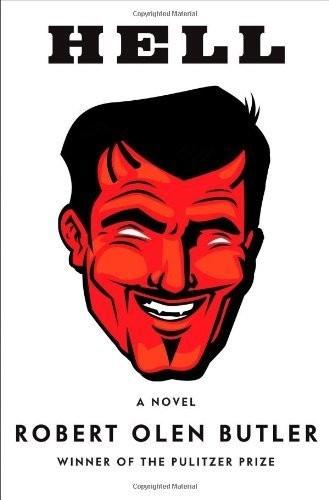 Hatcher’s mind slides away, full of worry about Anne, when the Fellini spot begins. Perhaps she caught sight of Henry in the street again. It’s always from a distance and he’s never the king she married, he’s always the young prince she first saw when she was in the care of Margaret of Austria at her palace in the Low Countries, when he was tall and still lithe and smooth of skin, and Hatcher holds very still not to cry out from the thrashing inside him, made more acute by his cell phone erection, as he thinks of Henry’s hands upon her and how she pants and lifts her eyes when she speaks of him even now, even though he had her head at last, and surrounding the four central monitors showing Hatcher close his eyes against his retrospective jealousy, thirty-two Fellinis are saying:
“The beach was full of the women I adore, the women of the variety shows on the street where I lived when I first came to Rome, San Giovanni, and they’d show films but afterwards there were the live variety acts and it was the women I waited for, the beautiful fat women with their naked thighs and their breasts flushed and moist and swelling out of their clothes, promising unseen nipples—I could only imagine how sweet—and I found them today beside the lake, these very women, the corpulent chorines of San Giovanni, and I arranged them on the shore, and the sea was saturated red, and then the wave came and my flesh and my bones dissolved even as the flesh and the bones of these women dissolved and we howled together in pain, the women of my past and I, and that felt very familiar: the way it feels to make a movie.”