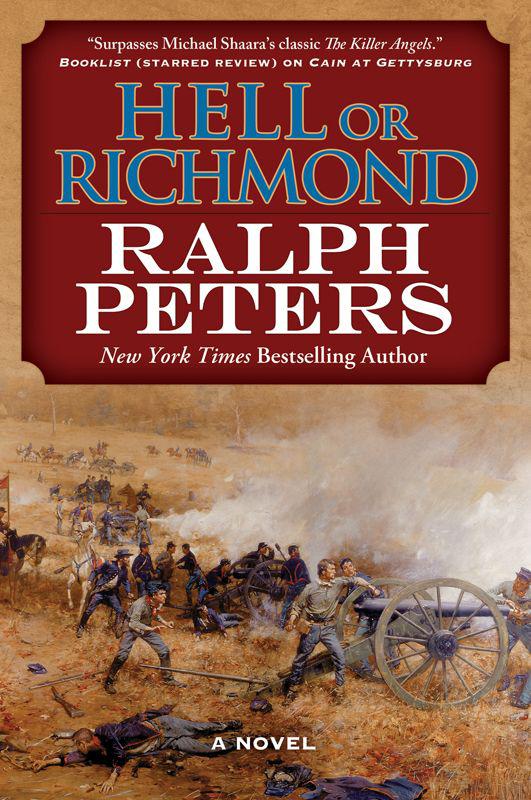 To the flesh-and-blood men who struggled,

before we turned them into bronze and marble

For who can think submission? War, then, war …

Rain. Thudding on canvas like bullets on flesh. Imagining a different sound, he rose and opened the tent’s flap.

Merely a courier passing by, fighting the mud for mastery of his horse. Not the visitor. Another man might have felt reprieved, but that was not his nature.

Would he be able to hear the train? Or the band when it struck up down by the siding? Would he have a last few minutes to prepare himself?

The rain only dirtied the day, leaving the stripped land as colorless as the uniforms south of the river, the fouled garments of the men he had learned to kill. And to respect.

Letting the sodden flap fall, he turned back to the emptied headquarters tent, a domain of maps and papers, of lingering human scents. The stove reeked of damp wood and ancient ashes. He had ordered the plank floor scrubbed, but the effort was futile. With each tread mud oozed up between the boards.

Determined not to make things worse, he sat down, jarring old bones. But he was not in command of himself this day. He soon got to his feet again, fussing with his uniform as he paced the canvas cage. Was
that
the rumble of the train from Washington?

The heavy rain obscured all other sounds. He had refused to let Humphreys site the headquarters close to the station, with its smoke and stink and noise. For the first time, he regretted that decision. This wait was abominable.

He wiped his nose with a handkerchief hard used. In the old days, before the madness of the war, he had been particular as to the freshness of his handkerchiefs. Now such matters seemed laughable.

Damnable illness, a vicious living thing in the lungs and throat. He had thought himself quite over it that morning. But the pestiferous cold without would not let go. Nor was it honest Philadelphia cold, but a damp wickedness crawling into the lungs and clawing the sinuses, assassin of consumptives. No wonder more soldiers died in camp than in battle. Even the weather aligned against him now, another enemy.

At least it did not seem to be a return of his pneumonia. The politicians and their favored generals had tried to employ even his health against him, declaring him unfit on that count, too. Yet, he had won battles, and they had not, an achievement that would never be forgiven.

Plagued by nerves and temperament, he opened the flap again. The landscape lay drear and dead, with no hint of spring. The war had passed over it many times, impoverishing its poverty. If the men across the river were fighting for this wretched dirt, he was not. At the start of the war, he had served a noble idea and kindled ambition. Now he fought because it was too late to stop, too ignoble after such a torrent of blood. He still believed in the justice of his cause, in the sanctity of an undivided Union, but the fine words that once had passed his lips were gall. What mattered now was the debt owed his dead and holding fast to his honor. The thought of defeat, of quitting, was unbearable.

But the choice had been taken from him. He knew what was coming on that special train: not just a man, but a sentence.

He made a fist at the air, embarrassing himself. The Committee on the Conduct of the War was a damned disgrace, a cabal of drunkards trafficking in lies. He hated politics, had always hated them. Now he was mired in their filth. There were times, black times, when he wondered if his government merited saving. Scoundrels were permitted—nay, encouraged—to undo the reputations of decent men.

The rain, the rain. Let the spring come and the marching into battle. Even if he would no longer be part of it. Let the sun warm the shoulders pressing forward in blue columns, let someone force this horror to an end. Even if that someone could not be him.

He dropped back into a camp chair, sour and heartbroken, yearning for a chance to show them all, to frustrate his accusers. He believed he was still the man to lead this army. He knew how to fight the men south of the river. But he lacked the skills to defend himself against the press and hireling politicians.

He had to do the honorable thing, he understood that. Today of all days, it was vital to remain a gentleman, to speak faithfully and betray no emotions to his career’s executioner. His family seemed ever destined for disappointment: his father, now him. Yet, he had done much, giving them all the victory they needed, that victory and more.…

Only to have a low cabal poison Lincoln against him.
Liars. Devils. Whoremongers.
Intimating, in the wake of Mine Run, that he sympathized with the Confederacy, that he was unfit to command, even that he was cowardly. All because he would not squander thousands of men to no purpose. Oh, yes. Had he overruled all military judgment, common sense, and decency and ordered Warren to attack, had he sacrificed five thousand soldiers in an act of folly, he might have been forgiven. But powerful men never spotted near a battlefield had seized upon his refusal to charge Lee’s entrenchments, coiling like snakes to strike his reputation. Their ardor for slaughter repelled him.

Perhaps he was better off being relieved. He could put this filth behind him, this infinite human vice of cold ambition. He could not understand how men could tell a public lie and then stand by it. He was not made for the politics of command, not for politics of any kind. He knew that his notions of honor seemed quaint, even laughable, to the likes of Sickles, Hooker, and Butterfield. But he could not imagine a life lived another way.

It would have been best to remain a corps commander. Or merely the commander of a division. The leadership of this army had brought with it more threats from the rear than from the Confederacy.

He wiped his nose, wet linen on raw skin.

Soon, soon, blessedly soon he would return to Margaret and the children. Taking pride in what
he
knew he had done and leaving the vultures to feast on the country’s carcass. Damn them all. Let them have their misbegotten war.…

Yet, even as he railed against the world, his heart declared against his going home. He longed to finish what he had begun, then to go back to Philadelphia in triumph, not odium. The unavoidable speeches of praise by aldermen and consolation banquets at the Union League would only prolong the pain. He wanted to stay here and
fight
. But the choice was not his to make.

Another fit of coughing dragged him back to the front of the tent. He hacked up what phlegm he could and spit into the mud. Still nothing. Only more rain. Preferring to do things properly, he would have liked to post an honor guard at the station. He felt no resentment toward the man himself. But the rain made the prospect of troops on parade a travesty. Only an ass would give soldiers a needless drenching. The war had taken decent men beyond that. He had settled for a few bandsmen and a lean retinue selected from the staff.

A mighty burst of rain assaulted the canvas, conjuring Gettysburg: his hour of glory, of triumph. The smoke, confusion, and carnage had calmed to reveal his army victorious. Lee had been
defeated
.
Lee!
His elation on that July afternoon had soared beyond all words, beyond his deathly exhaustion, and he had thought, mistakenly, that all might be well thereafter. Only to spend the night wrapped in an oilcloth, sitting on a rock amid the mud, under a tree that channeled the rain into torrents. Every roof had been required for the wounded his victory cost.

The wounded, in their legions. Damn Washington, and damn the New York papers. None of the men in frock coats and cravats understood the human side of an army. How they had howled—and were howling still—because he had not chased Lee like an ill-trained dog. They refused to hear that three hard days of battle had left tens of thousands of wounded men in his care and thousands more as prisoners on his hands. They did not want to hear that his army, too, had been mauled and thrown into confusion, that officers had been slaughtered by the hundredfold, that ammunition pouches and caissons had been emptied, that entire divisions had nothing to eat and no water untainted by blood, that the corpses of the brave baked in the sun, or simply that he had done the best he could. The Army of the Potomac had worked a miracle, sending Lee home in shame, but it had not been wonder enough for the stay-at-homes.

Now their spite had caught up with him, with an innocent man their instrument, and he would be replaced by Baldy Smith, a rude and cranky fellow. It was humiliating. But he was determined to bear it as a gentleman.

The rain retreated abruptly, leaving a rear guard of droplets. Perhaps the change of command would bring the army better weather. And dry the damnable mud of “Old Virginny.” His men needed to escape the stench of their hovels and the diseases crowding bred. The sick rolls and the tally of the dead were simply appalling. The men needed the warmth of the sun to quicken their muscles and fresh air to lift their hearts.

He sneezed and felt his beard for snot. It was vital to maintain his dignity. His visitor had soared above them all. He remembered the fellow from Texas and then Mexico: sun-reddened and rusty-haired, otherwise nondescript, of medium height and build, earnest and amenable, the sort of lieutenant you called upon to make up a fourth at cards. He always had seemed a lonely man, but they all had been lonely for their wives and sweethearts in those Texican days when the war refused to come. He himself had been a staff engineer, the other man a chafing quartermaster. At Monterrey, they had been thrilled by war, young men eager for accolades and brevets. It was grotesque to remember it now, how even he had viewed war as romantic. And the sad, silver-jangling Mexicans obliged them.