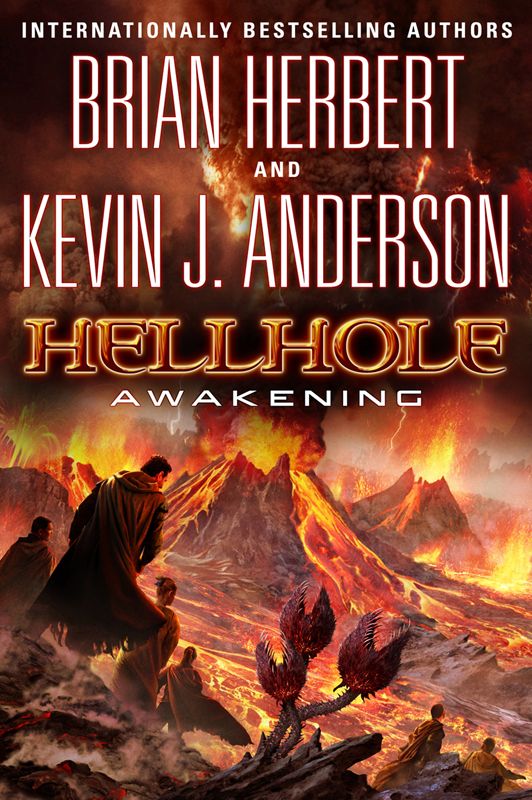 We dedicate this book to the many readers who enjoy our Dune novels, as well as this original series and our other books. Thank you for your years of support, interest, and enthusiasm, and all of your many letters and comments.

All of our books are complicated undertakings, and we cannot do them alone. As always and more than anything, we want to express our thanks and deep love to our wives, Janet Herbert and Rebecca Moesta, who provide more support in all ways than we can possibly say.

For
Hellhole Awakening
we are especially indebted to the tremendous support from Tom Doherty, our publisher at Tor, and the editorial work of Pat LoBrutto, Maxine Hitchcock, and Emily Husain, and the support of our agent, John Silbersack. Mary Thomson provided excellent transcription support.

Other Books by Brian Herbert and Kevin J. Anderson

The growler storm rolled over the landscape of Hellhole, a riot of static discharges and blistering wind. The electric bursts etched glassy scars along the ground, scattered pebbles and dust, and splintered a spindly tree on the edge of the spaceport landing field.

High-resolution weather satellites had observed and followed the storm as it came over the hills toward Michella Town. The colonists took shelter in their reinforced homes, protected from the planet’s persistent violence. They were accustomed to the destructive vagaries of Hellhole’s weather, the frequent quakes and everyday shifts in wind. By now, they knew how to survive here.

On the outskirts of town, Elba, the large headquarters-residence of General Tiber Adolphus, stood armored against the storm: The sealed window plates and thick doors held firm, and the wind moaned with frustration as it pressed against the structure. Grounded lightning rods dissipated the repeated blasts.

Standing at the reinforced window plate, Adolphus stared out at the wind-whipped landscape. During the first desperate years of the Hellhole colony, growler storms had taken a high toll, but now the fury was just part of daily existence. Static discharges exploded in the sky like weapon blasts. He saw the weather as a metaphor, an apt one.

The storm is coming.
The members of his strategy session were safe for the moment, but soon a far more destructive hurricane would arrive when Diadem Michella Duchenet sent her Army of the Constellation against the upstart rebels.

Sophie Vence brought him a cup of hot kiafa to drink before the strategy meeting resumed. “This is recently harvested, our best crop yet. Another step toward providing civilized amenities out here.”

He sipped the hot beverage and nodded. “Further amenities can wait until I secure our freedom.”

It was here, inside the meeting room of his headquarters, that he had conspired with a select group of like-minded planetary administrators to construct their own transportation network that did not rely on the old government. And they had done it right under the Diadem’s nose. Now that the isolated frontier worlds were connected by the new stringline network, they could become self-sufficient, without paying exorbitant tribute to the Diadem Michella.

Holding his cup of kiafa, Adolphus took a seat at the planning table. “The Constellation fleet will be coming—we can be certain of that. Sonjeera received our announcement more than a month ago and killed our ambassadors two weeks ago. We know Diadem Michella will respond.”

“We’ve been preparing for this all along, quietly building up our defenses. Each day, we get more and more ready.” Bony Craig Jordan, his security chief, was proud of the hodgepodge Hellhole military. A veteran from the first rebellion, he had been protecting the General for years in his exile. Now, during the rapid military preparations, Jordan managed part of Hellhole’s defensive army.

“The Army of the Constellation is a lumbering beast, widespread, mismanaged, hobbled by its own bureaucracy. That buys us a little time.” Adolphus tapped his fingers on the table. “Their fleet is being assembled, armed, loaded, and supplied right now—a gigantic operation for which they are ill prepared. The Diadem is impatient, but confident in her overwhelming strength. She will try to destroy everything on Hellhole, just to make an example of us.” He showed strength by maintaining a smile on his face. “I would prefer not to let that happen. Therefore, we have to outsmart them—that’s all there is to it.”

Jordan let out a boisterous laugh that carried more velocity than his frame seemed capable of delivering. “Diadem Michella has a habit of underestimating you, sir. When she exiled you to Hellhole, she didn’t expect you or our colony to survive, much less prosper.”

“We can hope she’s too old to learn any new lessons,” Sophie said, her voice laced with equal parts bitterness and sarcasm. She had been both his sounding board and lover for years. With gray eyes and wavy dark hair, she was beautiful without relying on elaborate makeup, hairstyles, jewels, or fashions. Although she owned a house in the heart of Michella Town, she spent most of her time with him at Elba these days. Not only was it practical to have her here at his headquarters when they had war planning to do, but she also made the place feel more like a home.

As if to express frustration, a tantrum of wind hurled itself at the house, but was unable to reach the people protected within. Adolphus turned to the other strategists in the room; they still looked windblown, although they had arrived before the storm struck in full force. None of them seemed bothered by the violent growler outside.

The exiled lordling Cristoph de Carre said, “No one disagrees with you, sir, but how do we ensure it? We should buy more time.” His face became angry, perhaps as he recalled the tragedies that had driven him out here. “I suggest we blow the stringline substations, cut ourselves off from the Crown Jewels, and just be done with it. It’s the only way to be sure.”

“That remains a final option.” Adolphus frowned. “But it’s a desperate one, and very costly to reverse.”

“If we cut all the stringlines,” Sophie said, “it’ll take years to reconnect, and possibly more iperion than we have.”

“But at least we’d be safe…,” Cristoph persisted.

“Unless it starts a civil war here in the Deep Zone,” the General pointed out. If he completely severed contact with the Crown Jewels, his fragile coalition might not survive the uproar. “We can’t afford the distraction.”

He knew that six DZ leaders had already voiced resentment over how his decisions placed their people in danger. They had never asked to become embroiled in a vast rebellion, but they had been swept up in it anyway. Though the frontier worlds overwhelmingly wanted independence, Adolphus had forced the matter. There was no turning back. When faced with retaliation from the Constellation, he worried that those surly administrators might turn against him. For security, he had stationed extra warships—ships he couldn’t spare—at those planets, ostensibly to help protect against the Diadem’s incursions.

Adolphus held up a hand before Cristoph could argue further. “We have other alternatives at the moment. Planning makes the reality.” The General had proved that time and again, achieving seemingly impossible military victories because he could see several moves ahead on the most complex of game boards. He expected to do it again.

Next to Cristoph de Carre, the Diadem’s tall, auburn-haired daughter spoke up. “And we have our telemancy. The Constellation fleet cannot be prepared for that.” Keana’s voice changed, becoming more flat and formal as her inner alien companion, Uroa, took control. “This is the Xayan homeworld, too. We will use our powers to protect it.”

As strange as it felt to allow Michella’s only child to participate in this planning meeting, Keana Duchenet was a powerful telemancer with the Xayan memories inside of her, capable of tremendous psychic powers. Worst case, she made a potentially valuable hostage.

The growler continued to cause havoc outside, moaning and scraping along the walls of the main house. A static discharge exploded in a geyser of sparks in the General’s yard. The house lights flickered, but came back on.

“No matter what, we can put up a hell of a fight—much more than the old bitch suspects.” Sophie rattled off the numbers without even consulting her data display. “We’ve had more than a month of full-bore military preparations across the Deep Zone, and plenty more already in place. Our factories are producing metals and equipment at breakneck speed. Right now, the DZ Defense Force has twenty-one military ships, and we’ve armed and refitted another seventy-five at Buktu. They’re on their way here now.”

Bear Bound (California Bears #3) by Rachel Real
Baby V (Chianti Kisses #1) by Tara Oakes
The City of Pillars by Joshua P. Simon
The Bitter Tea of General Yen by Grace Zaring Stone
The Knitting Diaries by Debbie Macomber
Losing Him by Jennifer Foor
Hunted by Darkness (Darkness #4) by Katie Reus
The Plot on the Pyramid by Terry Deary
Closer to the Chest by Mercedes Lackey
No Land's Man by Aasif Mandvi
Our partner