Her Father, My Master: Mentor 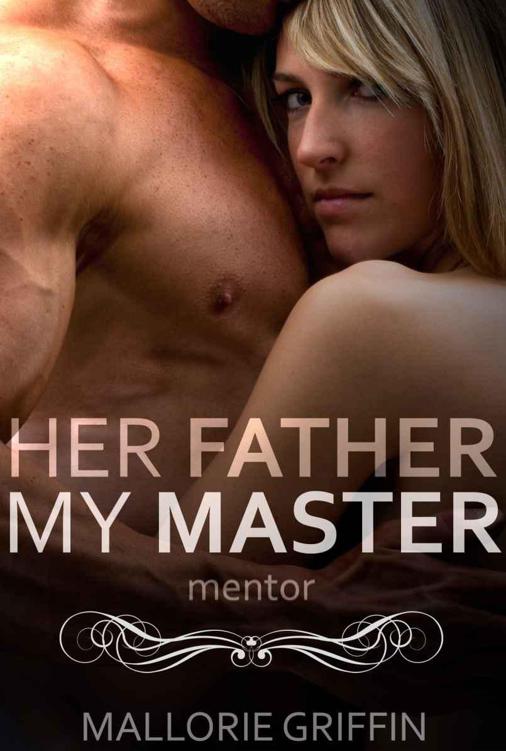 Her Father, My Master:
Mentor

Check out other works by Mallorie Griffin

If you enjoy this, be sure to read the second in this series:
Her Father, My Master: Enthralled

I couldn't believe it.  I simply could not believe my eyes.  My heart climbed into my throat, pounding like a drum as I felt my veins and arteries fill and course with adrenaline.

I stood in the doorway, my face blank, revealing none of the terror and rage I was currently feeling.  Because I was watching Joey fuck
Madison
.  I was watching my boyfriend rail my best friend.

It started so innocently.  I merely asked Luke where Joey was, and he slyly smiled and pointed me towards the back room of the auditorium.  There was a weird little room there that I guessed used to be the drama teacher's office, but right now it was being used by no one.

Well,
clearly not no one
, I corrected myself as I watched Joey pump his hips against Maddie in the doggie style position.  Their backs were turned to me, and I still was in shock.  But finally, I gathered enough wits about myself to scream.

The scream didn't contain a word.  It was just a scream.  But it did the trick; Joey wigged out and turned around, staring at me like a two year old with his hand caught in the cookie jar.  His adolescent, barely 18 year old prick was erect and poking out of his jeans, and there was absolutely no confusion about what he'd been doing.

Meanwhile, Maddie jumped about a foot in the air, her bare ass hanging out in the breeze, and she looked at me, shamefaced.

"How could you!" I screamed, not knowing whether to direct my murderous glare at Joey or Maddie first.  Both of them had an equal part in this treachery, of that much I was certain.

I took a deep, juddering breath, and clenched my fists.  I wanted to punch them, beat both of them bloody, but instead I whirled around, and stalked out of the auditorium.  As my stamping footsteps echoed in the large bare room, I realized probably everyone in school heard that scream.  It was a good thing most of the other students had left for the day already.  This was enough to deal with as it was, I didn't need the added embarrassment of the entire student body knowing what had happened to me.

"Krys, wait!" Joey said, following me as he tried to stuff himself back into his pants, and zip himself back up.  He grabbed my arm, and I pulled away, spinning around and slapping him in the face.  Tears were welling in my eyes, but anger kept them at bay.

I bit back a sob as I continued to run out of the school, slamming a shoulder roughly into one of the double doors that marked the egress.  The pain of that blow helped me to keep myself together until I got to my car, but I broke down as soon as the door shut.  I bawled and beat my hands against the steering wheel.  How could Joey do this to me?

And he'd been so good to me too.  He was so sweet, and we'd been going out for months.  He actually remembered my birthday, and even Valentine's Day, unlike Brad, the guy I was dating before Joey.  Brad was so self-centered he forgot I existed, half the time.  But not Joey.  Joey wasn’t like this.

We were both virgins, and we promised to give ourselves to each other on prom night.  Well
that
prospect just went flying out the window.  A new round of crying blossomed upwards as that sharp, fresh memory of Joey going at Maddie stung me once again.

Just then, I looked up and saw Joey running out of the school towards my car.  "Oh no you don't, you bastard," I growled.  With tears still streaming down my face, I started the car.  I wished I was in a Mustang or a Camaro, something that would really roar when I revved it, but instead the engine in the tiny sedan whirred, sounding more like a hamster on an exercise wheel than anything menacing.  I didn't care.  My car could run him over just the same.

I slammed my foot on the gas, but I caught myself before I got too carried away.  I was upset, but not quite first degree murder upset.  Joey dodged to the side, too.  He was afraid of me.  As he should be.  I tore out of the parking lot, not looking back.

But I knew I'd have to face him.  I had to finish out the school year, after all, and there were months to go.

What could I do?  How could I ever face anyone at school, ever again?  I knew that the news would spread fast.  I knew I'd be the laughing stock of my year.  Of the entire student body.  Of the entire district.  There goes Krys, the girl whose boyfriend fucked her best friend.

I had to do something.  I had to get back at them, back at her.  It had to be worse than anything Maddie could do to me.  I just had to think of a plan.

I arrived home in about 20 minutes, and stormed into the house.  "Is something wrong?" my mom asked, looking concerned.  I flew by her, not wanting her to see my face.  What happened to me was bad enough, I definitely did not want her knowing.  I didn't want to talk to her about the sex part at all.

"No," I said shortly, and made for my room.  I needed a plan, but first I needed something, anything to take my mind off the horrible thing I'd seen.  I pulled out my laptop from my schoolbag, and tossed in onto my bed, then savagely hurled the bag on the floor, desperately trying to work out some of my anger.  The bag hit the floor with a loud satisfying thump, and I briefly wished it was Maddie's head I hit.  I saw a black blur race out from under my bed.  It was Flicker, my poor cat.  I cringed slightly as he made his dash for freedom, and I shut the door after him.  I didn't want to upset him too much with my anger, he certainly didn't deserve it.

"Bitch.  That fucking bitch," I muttered to myself and I flopped onto the bed, grabbing my laptop and pulling up Youtube.  I was determined to find some funny cat videos to take my mind off those two traitors.

I started with the cat videos, naturally, but the recommended videos afterwards led me further and further from things of feline nature.  Soon, I found myself watching SNL Jeopardy skits.  I'd seen a few of these before, and usually found them hilarious.  I loved Darrell Hammond's impression of Connery in particular, and he never failed to make me laugh.

Tonight, however, the impersonator was giving me different ideas.  From the very first video I watched, a seed was planted in my head, for Connery's constant allusions to having fucked Trebek's mother were the forefront of his shtick.  By the fifth video, something clicked in my head.  I had my revenge.

I would have sex with Maddie's father.

Part of me had reservations about the whole thing.  After all, I promised my virginity to Joey.  It seemed like a sacred thing at the time, and not something to just throw away.  But Joey had thrown his away with that bitch of a slut.

I had to admit, I found him hot, too.  He kept himself in really good shape, and he had a gorgeous face.  Hmmm.

I decided right then and there, that I would do it.  The only question was how I would go about it.  I clenched my hands as I realized I would have to play nice to her.  It would be strange to just suddenly show up at the house of someone whose guts I hated.  I would have to make up with her.

My lips curled upwards in a slight smile.  Yeah.  Let her think I was okay with her.  Then rip it all away.  This could work.

And I had just turned 18.  I knew there were some weird laws about sex with minors, but I was no longer a minor, if only just barely so.

I stripped my clothes off, and took a critical look at my body.  I looked fairly decent, I wasn’t blind to that.  I had long blond hair and a petite face, with large eyes and full, red lips.  I could probably stand to lose a couple of pounds though.  And I knew I'd have to shave everything off.  I cupped the mound of my adolescent vulva, feeling the soft hair there.  I'd seen enough movies and watched enough porn to know that guys seemed to like women bare, but I wasn't sure to go about it.  I needed guidance, and practice.

Throwing on a t-shirt and jumping back onto the bed, I now searched Youtube again with other videos in mind.  For the next couple of hours, I browsed tutorials on shaving down there, and also looked to see if there were any tips for flirting with older men.  There were, and I absorbed each video with a kind of intensity that I never gave my schoolwork.  I was going to do this.

Out of curiosity, I looked at the videos on how to flirt with women as well, just to get the guy's perspective.  Most of them were funny, but I managed to pick up some valuable clues as to what men thought constituted flirting.

Just then, my mom called me down for dinner.  "Shoot," I muttered, and glanced at my watch.  It was 5 in the evening already?  I hadn't even so much as looked at my homework yet.  I'd have to deal with it after dinner.  For now, I pulled my pants back on, and raced downstairs.

I felt giddy.  I had a plan.  The ultimate revenge.

For the next few days, I gave Maddie the silent treatment.  It wouldn't do to just make up with her immediately.  She would definitely be suspicious about that.  So I meticulously avoided her at school, always leaving a room whenever she entered, and if we had class together, I would sit as far away from her as possible.

Joey was easier.  I considered us broken up, and I avoided him entirely.  If I never saw him again, it would be too soon.  As far as I was concerned, he didn't even exist.  And he seemed to be avoiding me.  Good.

But I had to be careful with Maddie.  I wanted to draw her back into the fold, after all.  So exactly 4 days later, on a Friday, I 'let' her catch me at the lunch room.  I was sitting at a table with my other girls, Jessica, Ashley, and Sophia, when she approached me from behind.

"Krys?" she asked tentatively.  I pretended not to hear her, and the other girls at the table sniggered.  They knew about the entire fiasco, of course.  The whole school had branded Maddie a slut, a fact that I took no small pleasure in.

"Krys?" she repeated, and touched my shoulder lightly.