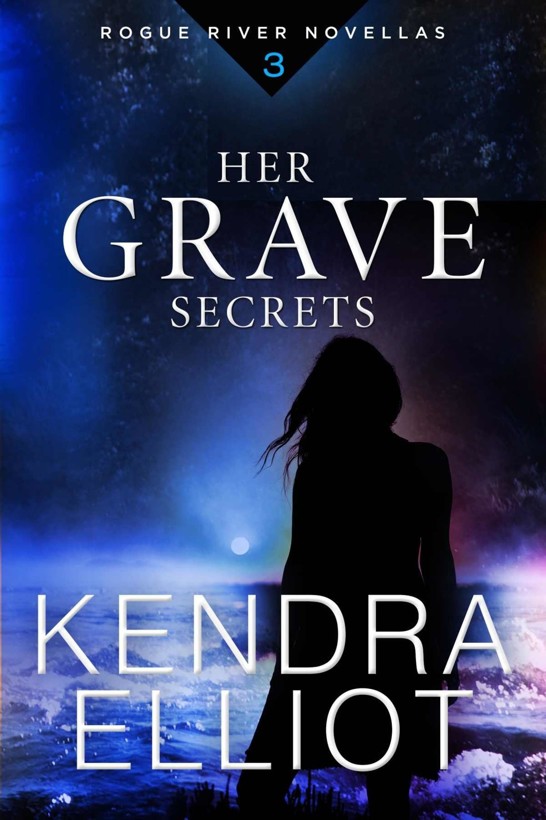 On Her Father’s Grave
by Kendra Elliot

Gone to Her Grave
by Melinda Leigh

Her Grave Secrets
by Kendra Elliot

Walking on Her Grave
by Melinda Leigh

The skull smiled at Stevie.

That is, if it were possible to smile without your lower jaw; it was more of a grimace. The dark, empty eye sockets taunted her, asking what’d happened to the rest of the bones.

“We’ll figure it out,” she promised. “There’s enough here to get us started.”

Crouched in the dirt next to the skull, Solitude police chief Zane Duncan looked up. “You say something?”

His blue gaze held hers. “What do you think?”

Stevie took a tentative breath, thankful that the scents of river, forest, and mudbanks filled the air, not the smell of decomp. Two fishermen had found the skull on the banks of the Rogue River that morning. It was half-embedded in the firm dirt next to a large fir that had fallen, the rest of the skeleton possibly under the trunk. She could see where the river had dug into the bank behind her and eaten away at the roots of several of the tall firs. This tree had given in to the hunger of the river and toppled, leaving its roots exposed.

“Do you think he got trapped when the tree fell?” Stevie wondered aloud to her boss.

“I’m no anthropologist, but I spent enough time with the forensic teams in LA to say with some certainty that’s a male skull. Look at those brow ridges. This guy was practically a Neanderthal. Hopefully no woman had a face like that.” She forced a smile. Sometimes using humor was the only way to stay sane in her job as a cop. Outsiders might call her insensitive, but the soft snort from Zane told her he understood.

“It’s a big rugged skull. Not small and feminine. And see how the bone protrudes below where his right ear should be? That’s a male characteristic. It’s easier to see the differences when male and female skulls are side by side.” She’d been so frustrated with her lack of knowledge at a recovery scene in Los Angeles, she’d spent the next week studying up on male and female skeletal anatomy with an anthropologist friend. Stevie wasn’t an expert, but she was confident in this educated guess. She gestured, taking in the huge trunk of the tree. “Hank will probably want a forensics team to remove the rest of the tree and the skeleton.”

“I don’t see why we need a forensics team,” said Carter the young cop, looking over her shoulder. “There’s no sign that something bad happened. It could just be an old cemetery or even an Indian site. This skull might have been here for two hundred years.”

“Even more reason to leave it to the experts. Let’s not start off on the wrong foot and disturb a possible crime scene or mess with an Indian burial ground.” Stevie studied the skull. She didn’t know how to identify the racial characteristics of bones, but she knew it could be done. Zane reached out with a gloved hand and brushed at the dirt near the side of the skull, trying to get a clear look at the bony protrusion Stevie had pointed out. She grinned at the look of concentration on his face. No doubt Zane would be online studying some skulls tonight.

“Well, it’s definitely a crime scene,” Zane said, glancing at Carter. “I’m no anthropologist either, but I know bullet holes when I see them.”

He pointed at two round openings near the back of the skull.

Zane stood back and watched Hank, the medical examiner, direct his team. Hank and three others had set up a grid and carefully removed the dirt around the tree, screening it into buckets for small bones or any other evidence. Then two loggers had cut through the tree and removed a large section of trunk, under which Zane assumed the rest of the bones would be found. Hank had discovered several in the dirt around the tree, and confirmed that Stevie was right about the sex.

Hank had clucked his tongue as he’d initially studied the skull. “You pissed off someone, didn’t you?” He turned it carefully in his gloved hands. “Someone had the gun right up close to his head when they fired.” He tipped the skull to show Zane. “Perfect circles. Not oval. There wasn’t any angle to the direction of fire. No exit wounds either. I suspect I’ll find the bullets inside when I clean out the matter.”

Zane had tried not to cringe. The remains were almost completely skeletal, but the inside of the skull still held a mass that he didn’t want to study too closely.

“Small,” answered Hank. “The entry wound size and the fact that there’s no exit wound indicate a small-caliber handgun. I bet I’ll find a couple 22s inside.”

“How do you know those aren’t the exit wounds?” Carter had asked. “Maybe he was shot through the eyes and they exited there.”

“No outside bevels around the holes,” answered Hank. “Bevels indicate the direction the bullet pierced the skull. A bullet exiting bone makes a larger hole than when it enters it. I can show you after I clean out the skull.”

Carter had shaken his head, looking pale. “I’ll take your word for it.”

Now Zane tried not to tap his foot as Hank’s assistants cleared away the wood dust created by the saws. He wanted to see the rest of the remains. Some clothing would be helpful, maybe a wallet to identity their mystery victim.

“Quit glaring,” Stevie whispered next to him. “You’re making the crew nervous.”

Zane relaxed his shoulders, realizing that the younger woman on Hank’s crew had nervously looked over her shoulder at him a few times in the last minute. “Sorry,” he muttered to Stevie.

She grinned, and he reached for her hand and froze. He shoved his hands in his pockets. The amusement in her eyes told him she’d caught his near faux pas.

Working side by side with Stevie Taylor had been an adventure. She’d returned to Solitude after several years’ absence, joined Zane’s police force, and captured his heart within a week. He’d been reluctant to openly date one of his cops, but a wise woman had pointed out that his happiness was worth it.

A small town like Solitude made up its own rules. So far it seemed to approve of the romance. A few old-timers had questioned his intentions toward the daughter of the former police chief, but they seemed to find him worthy.

In their eyes Stevie could do no wrong. She was the prodigal daughter who’d returned home after more than a decade because of the death of her father, Bill Taylor, Solitude’s police chief. The townsfolk had welcomed her back with open arms—a former LAPD officer who’d decided their tiny rural town was a better place to live and catch some bad guys.

Zane had spent five years on the police force earning the trust of the town. It was like a secret club. The primary key to membership was having been born in Solitude. He’d grown up on the eastern side of Oregon and this town, an hour inland from the Pacific Ocean, had made him feel welcomed, but he didn’t feel completely accepted. In their eyes he was still an outsider; he had their respect but not their hearts.

“He’s got something,” Stevie exclaimed.

Zane refocused on the small crew, who were nearly knocking heads as they all tried at once to get a look at something in the dirt. One of them snapped photos as another slowly lifted a cloth from the dirt.

The fabric had held together better than the body. Zane knew a body exposed to the elements would rapidly decompose. It’d been a hot summer and the remains had been found in a moist area of the river valley. Scavengers, bugs, and bacteria had worked their destruction on human flesh. Under the tree trunk were simply bones, a shirt, and shorts.

“No shoes,” Stevie pointed out.

“But even after the tree fell, his feet were exposed. Animals could have torn the shoes away. Same with any hair. We’re lucky to have any clothing at all. No telling how long he’s been here,” said Zane.

Hank awkwardly knelt next to one of his team. The ME mopped his sweaty face with a towel, making Stevie concerned for the older man in the high heat. He pointed at something in the dirt, and an assistant snapped a photo before Hank picked up what Stevie immediately knew was a rib. He slipped on a pair of reading glasses and peered at the end. Zane moved forward.

“His ribs are crushed,” said Hank. “Which I’d expect to find with a tree of that size on top of him, but he was already dead when the tree hit him. There’s no blood in the breaks like you’d see in a wound that occurred around the time of death. Scavengers have been nibbling on some of the long bones too. We’re not going to find all of him. There are going to be pieces scattered all through the forest.”

“So he was dead before the tree fell,” Zane repeated, his brows drawing together.

“Which is what I expected with two holes in his skull,” Hank answered dryly.

“Is this our murder scene?” Stevie asked.

“Don’t know yet,” Hank answered. “I’ll sample the soil under him for blood. The shells didn’t turn up here, but the shooter could have picked them up before he left. It depends if he was willing to haul a body into the woods this far. And if he did, why didn’t he bury him? No one would have found him for decades.”

“No wallet?” asked Zane. He wanted the body identified as soon as possible.

“I checked under his pelvis where I’d expect one to be. Nothing.”

One of Hank’s forensics team members finished freeing the shirt from the bones and held it up, peering at the tag. “Hanes, triple extra large,” she stated.

Stevie sucked in a breath as Zane remembered a big guy who was missing.

“Oh, no,” whispered Stevie as a choking sound came from her throat.

Zane could make out the faded fish printed on the back of the T-shirt. He’d seen the shirt dozens of times. Solitude police officer Roy Krueger had always worn it when they’d fished the Rogue River during the summer. His “lucky shirt.”