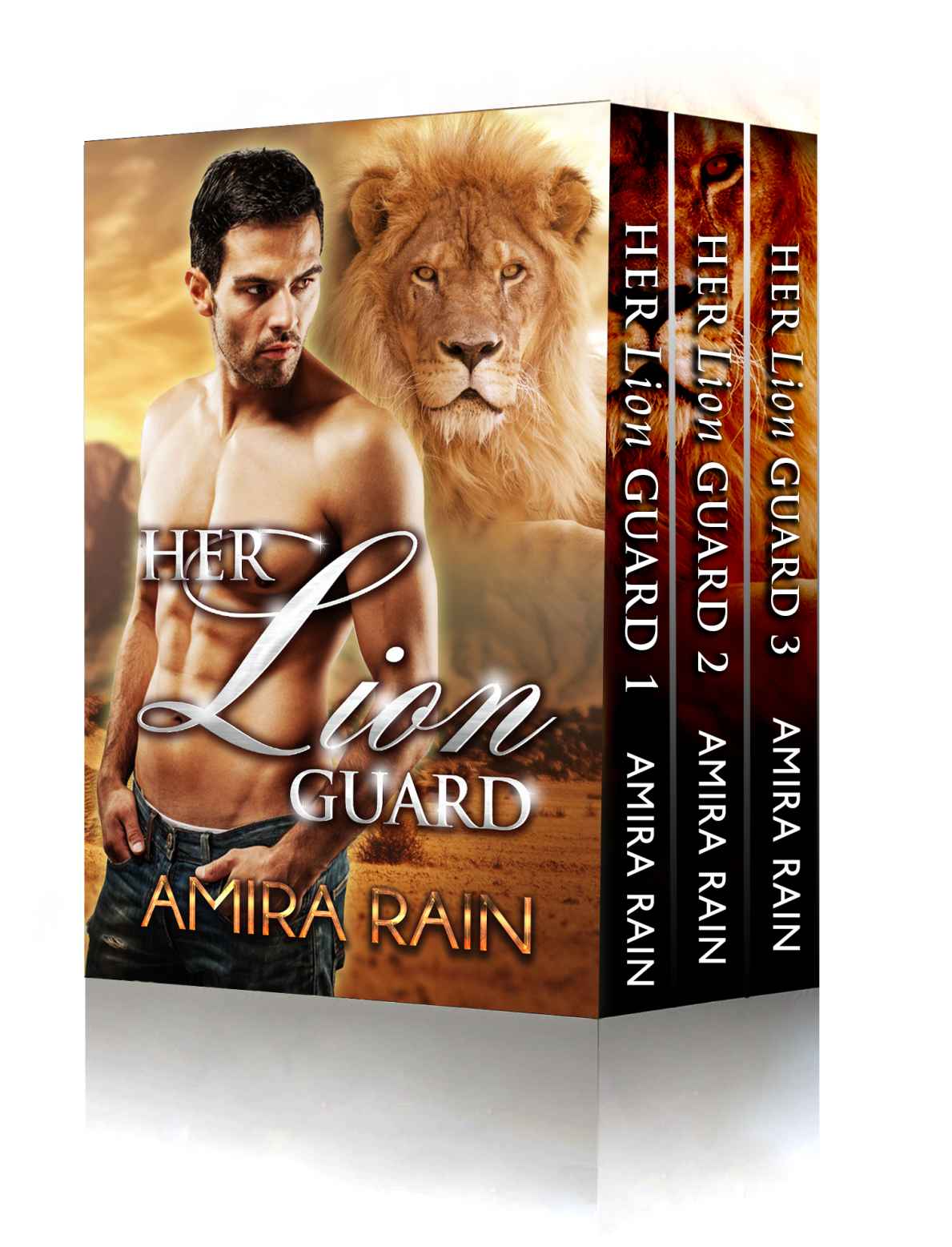 A Shifter Paranormal Romance By..

All 3 books from the epic “Her Lion Guard” series!

Curvy Mary-Lou always knew she was different somehow, however she really had no idea just how special she really was until she met him.....

After stumbling upon an underground community of shifters within an abandoned warehouse, Mary-Lou knows she has to run for her life. They smell blood and they are coming after her.

She runs and runs right into the arms of the strong and handsome Jonas. Jonas has the ability to shift into 500 pounds worth of lion and he insists he is there to protect her curvy frame.

He tells her that she has something that they want, and they will stop at nothing till they get it. If she wants to survive she must to allow him to become her Lion Guard...

Get new book notifications, free books and lots of other great and wonderful things over @

There are bad days, and then there are
BAD days
.

Mary-Lou walked with her head down. The hood of her oversized sweatshirt was pulled low over her face, obscuring intelligent green eyes and full lips currently set in a tight frown.

The city was waking up around her, gaining volume and vibrancy as Friday officially became Friday afternoon and the weekend solidified from a distant dream to a happy, if brief, reality. The streets were rapidly filling with people either heading home or heading out; with couples holding hands and making eyes at each other to children running ahead of exasperated mothers. It was crowded, it was loud – it was lovely, and all she wanted was to make it
stop.

Mary-Lou maneuvered around playing children, overly excited dogs, and aggravated businessmen without lifting her eyes from the ground. She hid in the mass of moving bodies with ease, concealing herself in the herd only to split from it a moment later and make her lone way down an empty alley.

Mary-Lou thought of going home, then dismissed the idea just as quickly. She was not quite ready to let go of her anger, and her parents deserved better company than she could provide at the moment.

So she walked, down the dark alley and around the corner, up a quiet residential street and beyond. She walked and felt her shoulders unclench, her hands relax from the tight fists that she had concealed in her pockets. Eventually, Mary-Lou found herself able to lift her head and
see
again – to think back and laugh at the idiocy of others, rather than reel with hurt.

The day had started out pleasant enough: No weird phone-calls, unnecessary coffee runs, or other irksome tasks took up her time in the morning, allowing her several hours of uninterrupted work. A good thing, too, as the kindergarten class that invaded the Cultural Center under the pretense of a field trip around eleven kept her busy well into the afternoon. The toddlers had been adorable --
the chaos they left in their wake – not so much. It had taken half an hour alone to reassemble the model trains in the miniature Tokyo exhibit, not factoring in the ten minutes she spent wiping off drool from Tokyo Tower.
The ever-exciting job of a receptionist
, she remembered thinking.

In retrospect, that may well have been the highlight of her day.

They came in twenty minutes before closing – two men, one woman, all too loud and loose-limbed to be completely sober. It was times like these that she disliked being the last one out of the office. Mary-Lou watched them amble from one exhibit to another, internally wincing every time an unsteady hand stretched to point at something beyond a “DO NOT TOUCH” sign. She had to draw the line somewhere, she thought, climbing over the White House to poke at a papier-mâché copy of the Washington Memorial seemed like a good place to start.

“Step away from there!” Mary-Lou called out, successfully startling the man straddling the White House into falling on his ass – thankfully backwards and away from the exhibit. She walked up to the confused trio, smiling her most painfully polite smile.

“Do you need help finding anything?” she had asked. The en's eyes fell to her chest. She immediately regretted being nice.

“I don’t think anyone’s gonna need help finding
those
,” one of them had leered. The girl giggled drunkenly at his side.

Mary-Lou felt her throat tighten, resisting the urge to cross her arms over her breasts. “We are closed,” she ground out between clenched teeth, all pretense of politeness gone.  “Leave.”

“Aww, come on, baby!” the other man grinned, open-mouthed and vulgar, “We just got here!” He stepped closer and lifted a hand, as if to touch her.

Mary-Lou tilted her head toward the lone girl, making sure the two men were still well within her sight. “No,” she answered. She had no idea who the plastered brunette was, and did not much want to know.

“Sure I do!” the girl had exclaimed and, to Mary-Lou’s horror, leaned in and pulled her name
-
tag right from her shirt, pin and all.
“Mary-Lou E. Smith – yeah! You were in my fifth grade English! I remember, ‘cause you were the only adopted kid in the class and Miss Radoslav told us not to make fun of you for it.” She breathed a foul-smelling giggle in Mary-Lou’s face and leaned back, pleased with herself.

Mary-Lou still did not remember the girl. She did, however, begin to seriously consider decking her in the face.

“For the very last time,” she had breathed out, green eyes narrowed to slits, “Out.”

One of the men leaned in and tried, for all apparent purposes, to lick her neck.

What followed was a confusing jumble of pushing, tugging, and drunken curses. Tom, the aged security guard, noticed the scuffle while doing his rounds and got involved toward the end. The three stooges had him to thank for their relatively unbruised state. Mary-Lou left shortly after they had been escorted from the premises, oversized red hoodie over her blouse.

Back in the present, Mary-Lou glanced down at herself and sighed. She did not enjoy dressing like a slob, but anything tighter left her feeling overexposed. Episodes like the one today hardly helped her feel comfortable, either.

Mary-Lou shook her head, dismissing self-pitying thoughts and the associated aggravating memories. A few heavy, golden-brown curls slipped free from beneath the hood and fell to frame her face. She sighed and pulled the hood down, letting her hair fall freely over her neck and shoulders. She then set forth to exploring her surroundings with a single-minded excitement.

Mary-Lou stood on the sidewalk
,
by the very last house in a row of darkened structures. She’d made it to the docks – or what was left of them, given that overfishing had killed that particular industry long before she was born. The neighborhood reflected the loss of fortune.

Many buildings were boarded up, layers of graffiti their only decoration. Mary-Lou strained her eyes, trying to make out the jagged words painted in bold red on a nearby fence. The letters seemed to run together, to jump out of one another –   a nest of meanings that remained just out of her grasp.

A sudden noise startled Mary-Lou from her contemplation of the strange message. She held her breath and listened – and it came again, then again, the same low beat of a strange, alluring song. Mary-Lou looked about, wondering if she had missed a bar or a restaurant on the way over.

She had not, but the light flickering inside a half-collapsed warehouse some yards down was definitely new. Mary-Lou imagined she could see people’s shadows flicker against the walls, like so many candles

Too curious to do anything but investigate, Mary-Lou headed down a crumbling cement path that led to the water and the source of the song. Maybe she’d found an indie bar; it would be nice to have a new place to visit in town. And if it was something else – well, the police could use the heads up.

On instinct, she threw one last glance over her shoulder: The houses remained dark, the street quiet and empty. Her eyes caught the graffiti on the fence, and paused.

Mary-Lou rubbed at her arms, warding off a sudden chill.
Maybe you are supposed to look at it from a distance
, she thought, then mentally added,
what a strange thing to write.

The sound grew louder as Mary-Lou walked toward the warehouse – but not in volume. There was a vibration in the air, tightness to the voices that rose and fell as one within. It made her cautious, jittery, and she found herself sneaking around the back instead of walking in through the front door
,
as she had planned. A broken window gaped like a wound in the building’s side. Mary-Lou ducked beneath it, rising very cautiously to take a peek inside.

At first, Mary-Lou could only make out the fire. A grand, tall flame twisted at the very center of the empty warehouse, gleaming blue-red as it curled up toward the tall ceiling – a fire hazard if she had ever seen one. As her eyes adjusted to the soot-singed light, Mary-Lou realized that the shadows flickering in and out of existence against the stained walls were of people dancing. She blinked, green eyes focusing on the moving shapes: There were at least ten of them, maybe more, all in varying states of undress. This close, Mary-Lou could hear the song for what it was, too – a chant, and would it not just be lovely if she had stumbled over some sort of a satanic cult?

The song rose in volume again, bits and pieces of the sharp words echoing in the empty space:

Give us blood, give us life,

Let us feast on hearts that beat too light

Give us blood, give us life,

Mary-Lou listened, half-terrified, half-enthralled by the grisly beat.
Definitely calling the police
, she thought, closely followed by,
at least they can sing
.

One of the dancers suddenly halted mid-motion, fell silent. Mary-Lou ducked further into the shadows, legs tensing in case she needed to beat a hasty retreat. But the woman did not look at her, too concentrated on the shaking of her limbs. Mary-Lou watched with rising horror as the woman shook and writhed, naked skin visibly trembling with some unseen strain even as her lips split back to reveal a demented grin. One by one, the other dancers joined her, bodies bending and twisting in unnaturally sharp angles. Mary-Lou grabbed for her mobile, wondering if the ambulance will make it on time, wondering if she should make the call at all.

And then it happened. The woman, the first of the shaking bodies, seemed to fold into herself and – no, fold
out
, break and rebuild into a shape so different it was impossible to comprehend. She screamed as her shoulders bent and twisted, as her chest sunk back into her abdomen; screamed and moaned and laughed as black fur burst in lines down her back. Mary-Lou watched, uncomprehending, as the woman disappeared and a panther stretched in her place, sleek and dangerous.

Love Inspired January 2016, Box Set 1 of 2 by Carolyne Aarsen
Under a Painted Sky by Stacey Lee
The Edge of Never by J. A. Redmerski
God of Vengeance by Giles Kristian
First-Degree Fudge: A Fudge Shop Mystery by DeSmet, Christine
Rock Star Kisses (Romance on the Ranch Book 6) by Verna Clay
The Avenger 3 - The Sky Walker by Kenneth Robeson
Tempting Bounty (Inter-Galactic Bounty Hunter Series Book 2) by Jones, KD
Chosen to Be His Little Angeline by Zoe Blake
The Love-Haight Case Files by Jean Rabe, Donald J. Bingle
Our partner