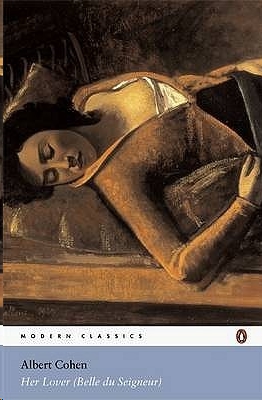 Translated and with an Introduction by

The French text used for this translation was prepared for the Pléiade edition (Paris, 1986) by Christel Peyrefitte and Bella Cohen. I am most grateful to Madame Cohen for many invaluable suggestions and her patient support. I claim as my own any blemishes which may have found their way into print.

This translation first published in Great Britain by Viking 1995

Albert Cohen was French not by birth but by adoption and conviction. He was born Abraham Albert Coen in 1895 on the island of Corfu, which since the sixteenth century had been a place of refuge for the persecuted Sephardic Jews of Spain and Italy. Ruled by Venice until Napoleon's victorious Italian campaign, Corfu became part of a British protectorate in 1814 and was ceded to Greece in 1864. Until 1919, when he became a Swiss citizen (and added an 'h' to his name as an affirmation of his Jewishness), Albert Cohen retained the nationality of his Turkish grandfather.

The Coens had long been leading figures in the island's Jewish community, which, however, declined sharply in the 1890s when accusations of ritual murder created severe anti-Semitic tensions. In 1900, as part of the exodus which followed (but also because the family soap business was in difficulties), Marco and Louise Coen emigrated to Marseilles, taking their only son with them. And there they stayed, buying and selling eggs for a modest living. Apart from a brief visit for his bar mitzvah in 1908, Albert Cohen never returned to Corfu, the 'Cephalonia' of his books. Yet from that visit he took away impressions as vivid as those left on Edward Lear, who was startled by the exuberance of springtime on the island. There is hardly any green left,' he wrote in April 1856, 'since an immense crop of marigolds, geraniums, orchises, irises, & cannonilla have come out ... The hedges are
absolutely
pink, & in fact the whole thing is most absurd from its very oddity.' But, in addition to the lush vegetation, the sun and the limpid sea, there were human sights and sounds and
smells which Cohen never forgot. The memory of narrow, bustling streets filled with extravagant talk and gestures, and the patriarchal gravity of his grandfather Abraham, who now led the Jewish community, were experiences which shaped the exotic mythology which fills a whole corner of his imaginary universe, rather as the Indo-China of Marguerite Duras's childhood underpins her fictional world. Cohen's barely-glimpsed Corfu, he said, was the seed from which he grew a baobab tree.

He was sent to a Catholic kindergarten and a state elementary school in Marseilles before moving on to the Lycee Thiers. There he met Marcel Pagnol, who was to remain a lifelong friend, and learned how to be French. But assimilation was not easy in the aftermath of the Dreyfus affair. On 16 August 1905, his tenth birthday, he stopped to listen to the patter of a street hawker selling stain-remover, who singled him out, called him a 'dirty yid', said all Jews were German spies and the secret masters of international finance, and told him to go home to Jerusalem. On that day, Albert Cohen learned what it was to be an outsider. But the experience was also an early intimation of his ambiguous cultural position, which finds obsessive expression in his books. He was caught between the extravagant style, warmth and moral certainties of his Jewish, oriental roots on the one hand and, on the other, the rationalist tradition of his adopted country, and his work was to be a quest for a way of reconciling multiple cultural tensions, of bridging the gap between East and West, the ideal and the real, the absolute and the limitations of the human condition.

But his childhood was not unhappy. If his relationship with his father was difficult, he was adored by his mother, who told him stories and encouraged him to believe that he was special. He also discovered literature, made the French language his, and, at sixteen, began a rather showy affair with an opera singer, which gready impressed his schoolfriends. In 1914 he enrolled for a law degree in clean, neat Geneva - another culture shock after the dirt and bustle of Marseilles- and he began moving in cosmopolitan, wartime, student circles. He acquired new friends and a mistress, a Hungarian countess who doubtless bears some resemblance to the Countess Kanyo
of Belle du Seigneur:
all the women in his life were to find their way eventually into his books. In 1919 he married Elisabeth Brocher, the daughter of a Protestant minister, for whom he wrote
Paroles juives
(1921) a sequence of highly
sensual poems which contain many of the themes to which he would later return - the greatness and degradation of the Jewish people, the need to embrace life and God like an eager lover, the brotherhood of man, and the supremacy of the Commandments of Moses, which stand like a beacon even to those who have no belief. It is a lush, lyrical incantation to which the nearest comparison is the Song of Solomon.

Cohen found few openings for his law degree in Geneva, and his only offer was a position in Egypt, where he lived for a year, separated from his wife and daughter. He returned to Geneva in 1921 determined to make his way as a writer. He had read widely, and his tastes were eclectic and highly personal. To the cool passion of Racine and Corneille he preferred the warmer tones of Dickens and Stendhal, and he distanced himself almost entirely from the great influences of the age, Marx, Freud and surrealism. He also admired writers as different as Proust (whom he later came to despise for his snobbery) and Paul Morand. In 1922 a first article in the prestigious
Nouvelle revue franqaise
brought praise and contacts. Other articles followed, including a homage to Chaplin which reappears in modified form in
Belle du Seigneur
(chapter 87). But, as his literary career seemed poised to take off, tragedy struck. In 1924 his wife died of cancer. Cohen reacted by throwing himself into his work, which now took a new direction. He had met Chaim Weizmann by chance and, with his backing, became the editor of the short-lived
Revue juive
in 1925. Increasingly aware of the threat of fascism and anti-Semitism, which had spread even to the clean streets of Geneva, Cohen felt driven to defend the Jewish cause, recently revitalized by the Balfour Declaration. His work for the
Revue juive
gave him a high profile (Einstein and Freud were members of the editorial board) and confirmed his literary standing with its publisher, Gallimard, and with Jacques Rivière, the driving force behind the
NRF,
who had already offered him a contract for five novels. (They were never written: Cohen never wrote anything to order.) When the
Revue juive
ceased publication, Albert Thomas, director of the International Labour Office in Geneva, prompted by Rivière, offered Cohen work. It was his introduction to the world of the international civil service, to which he would subsequently return at intervals.

He also began to rebuild his personal life. He drew increasingly close to Yvonne Imer, a friend of his late wife. They were ideally suited, and it was to her that he dictated a play,
Ezechiel
(1927), a number of shorter texts which he subsequently destroyed, and his first novel,
Solal,
which appeared in 1930. With her he perfected a working method which he never abandoned. He did not so much plan his books as cultivate them. He began by turning ideas over in his mirid, jotting down possibilities and turns of phrase as they occurred to him, then spoke them for transcription on to paper. The result was revised and expanded and retyped, then revised and dictated again, a process which was repeated until the refinements of invention flagged. The result was a vast, untidy bush which was pruned and trimmed until a shape emerged. Cohen claimed that he never really finished any of his books: he merely abandoned them. In this sense, his art was a long patience. But it was also a patience shared, a complicity which stimulated him and gave him a first audience: a smile or a frown from his amanuensis determined the fate of many an irony or added yet another subtlety to character or action. He always dictated to women, and preferably the women he loved. Other men, he said, bring women flowers; he preferred to give his a book. Writing, when properly managed, was a kind of conjugal joy which constantly reinvented his relationships, providing a common intensity of experience which staved off boredom, which is the death of love. Had Solal and Ariane followed their creator's practice, their love might never have turned stale and lethal.