Her Wish Before Christmas (Holiday Hearts) 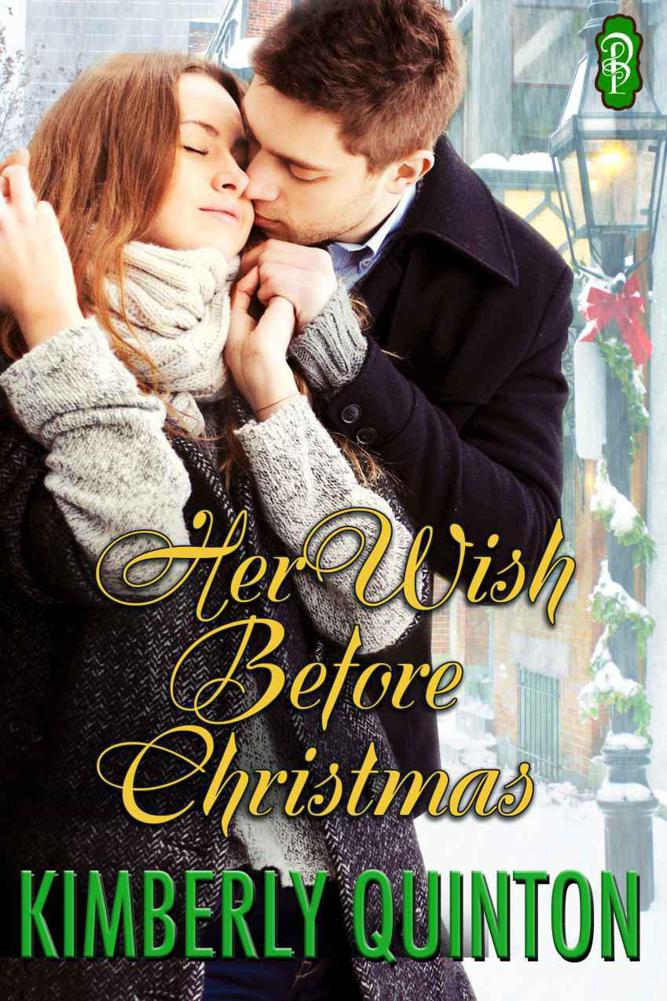 Her Wish Before Christmas

The Virgin Madam by Shiloh Saddler

A Dance with Death by Louisa Bacio

The Blog Affair by Alissa Baxter

Seal the Deal by JoAnne Kenrick

A Marine of Plenty by Heather Long

Her Sister’s Wedding by Jane Ainslie

Hanging by a Moment by Bella Juarez

Chelsea’s Somebody by Yvette Hines

This one’s for my wonderful family and the writers I am blessed to call friends. Heather, Nikki, and The Lit Girls—Thank you!

Her Wish Before Christmas

“I swear to God, if Prissy tells us to move this tree one more time, I’m out of here.” Lena raised her voice enough to be overheard by any and all ears in the vicinity.

Genny Ridgeway laughed at her cousin’s ultimatum. “Let’s finish before she marches up here and gives another order.”

They scooted the six-foot delicate, white-tipped Christmas tree into the corner.
Perfect
.

Her older sister Priscilla, Prissy when in a mood, Cilla any other time, stepped outside the office door nestled to the side of the front room. “I’m not deaf, you two, and I don’t appreciate the childish nickname one bit. Nona is watching.” Wearing vintage pearls and a cashmere sweater set, she projected sophistication as if granted at birth.

“Look, we need a break. Christmas in the Square isn’t until Friday, and the store already looks as if St. Nick threw a house party with a couple hundred tipsy elves,” Lena said from where she arranged empty boxes decoupaged with vintage holiday wrapping paper. Even in frustration, her pout, artfully lined with the hottest trendy color, looked photo ready.

“Surely we’ve unpacked every Christmas box by now.” Genny blew out a quick breath, ruffling the bangs out of her eyes. “The store looks just as I remember but bigger somehow.” She brushed white glitter off her forest-green cable-knit sweater and blue-black jeans. She considered her wardrobe classic, and Lena’s stylist once told her green was a good color for her.

As the youngest of Nona’s four granddaughters, Genny used to cry about not being born with the more exotic Ridgeway characteristics. No raven hair and symmetrical features like Lena or the amber curls and sea-green eyes of Jacqui. Cilla spent the time and money to turn her hair into a shimmering, glossy blonde that fit her so well no one would suspect she wasn’t a natural goldilocks.

Thanks to the last few months spent on a yacht, daily sunshine had added some natural highlights to Genny’s brown hair, brown eyes package.

“Nona turned this place into a wonderland, and we will, too. We owe her that much.” Cilla eyed the tree as if inspecting their work. “And you two owe me. I have a dozen more boxes of handwritten files to go through. I’ll be gray and wrinkled by the time I get everything into a workable database.”

Their grandmother’s store was a fixture in the Laurel Cove, Massachusetts Christmas In The Square festival. The celebration wouldn’t be the same this year without Nona Camilla. Left adrift after her death the week before Thanksgiving, Genny agreed to stay in town through the holidays. Teaming up with her sister and cousins to catalog the stock and clean out her office was the right thing to do. Their grandmother had kept tight rein over the place when she was alive, and the treasure-filled rooms had been the focal point of the Ridgeway girls’ childhoods. As sole owner of Camilla’s Collectibles upon their grandmother’s death, Cilla was determined to carry out her traditions to the smallest detail. If anyone knew the exact place each decoration should be stationed, it was her, and the rest of the granddaughters followed her orders.

The ornaments and decorations they had put on display over the last week held so many memories. They would turn the shop, stuffed with all the furniture and knickknacks she had collected over the years, into the highlight of the town’s annual Christmas festival.

“Looks good.” After another sweeping glance around the front room, Cilla headed back into the office.

Holiday tchotchkes, from garland to glass figurines to baubles of all kinds, decked every surface. The bright glass beaded ornaments that hung from every cabinet and drawer handle were Genny’s favorite. As a child, she would pretend they were princess jewelry and would spend hours playing with them. Nona had left them to her in her will, but she didn’t feel right not putting them out as they had been every year since she was five. The newer ornaments were displayed in clear vases and antique bowls set out on the tables and shelves and hung on the lower halves of the four Christmas trees placed amongst the wares. The older, more delicate items were kept behind the many glass-doored cabinets and on the upper branches of the trees. The shop encompassed three large square rooms connected by low arching passageways, and the only way through the mini-islands of furniture lay along narrow paths linking the rooms.

“I’m heading out to Tinker’s. I’ll save you a seat,” Lena leaned over and whispered.

She took the string of silver bells off the door and laid them in a basket of antique doilies, somehow managing to jingle only one. The door was closing behind her before the wheels on the office chair squeaked. Cilla peered around the doorway and stuck her tongue out, making a face that reminded Genny of the arguments they used to have as kids. They’d try to see how many times they could get away with it before their grandmother caught them and made them sit and hold hands.

“Oh, go ahead. Save me a spot. I can’t start one more spreadsheet tonight without my eyes crossing forever. What Nona had against the beautiful new iMac I bought is beyond me.”

“I’ll close up. Besides, I need to put up my samples for the day.” Genny flipped the sign hanging in the front window from
Open
to
Closed
. “And Lena’s just going to be waiting for Bartender Hottie’s next break.”

“You’re going to call him that one day if you’re not careful. And what does she see in him anyway?”

“Have you seen his arms? That’s what she sees in him. I bet all of him is as fine as his biceps, too.” Genny emptied the few remaining cookies from the lace-covered silver platters into a Tupperware container. Keeping the leftover samples was one of the perks of baking the cookies the store sold.

“But does he have a brain in his beautiful head?” Cilla snagged the last snickerdoodle. “You know she’s not thinking straight.”

“Lighten up; she’s not that serious about him.”

“Hope you’re right. Anyway, your new flavors were a big hit. Mrs. Wilson wants to add six dozen of the cinnamon-orange-clove and the rum-raisin-oatmeal to her Christmas Eve order.”

Cilla slipped her arms around Genny for a quick hug. “I’m glad you’re here to help. I really needed someone. Mom hasn’t set foot in here in months. Nona was behind on bookkeeping, and so many little things snowballed after she died. I’m just now getting caught up on the records.”

“I’m sorry I didn’t visit more often.” Genny straightened from her sister’s embrace. They’d end up in another crying session if she didn’t. Guilt over not being home for her family ate at the edges of her grief. She’d visited less and less in the last few years. Working as a private chef willing to travel abroad meant she went where the jobs were. Even though she lived a near nomadic existence, she had loved the adventure of moving from one little rental to the next wherever one client left and another picked her up.

But she missed family, and she wanted a place to call home. Her grandmother’s hospitalization had provided the excuse she needed. She’d jumped on the next flight out of Singapore and didn’t look back. Recently, an unfamiliar restlessness had invaded her homecoming, as if something or someone was absent. She’d yearned for a settled life but maybe Laurel Cove wasn’t the place to build one, family or no family.

“Are you going to stand there and daydream over your cookies for the rest of the night?” Cilla turned off the light in the office and shrugged on coat and gloves. Her eyes were bloodshot and glistening from unshed tears.

“You go ahead. Order me a pint, huh.” She held what she hoped appeared an encouraging smile and shooed Cilla out to the pub across the street.

Genny carried the platters to the workroom turned kitchen at the back of the store and washed them. Since childhood, she never felt more at peace than in her grandmother’s store. And working alone gave her a sense of closeness to Nona she didn’t feel when her sister and cousins were present. Once the clean platters were stacked and ready for the next day’s samples, she slipped out of her in-store flats, preferring the boots and thick socks hidden behind the front counter for the walk to the bar.

The hardest part of closing the store at Christmas was the round of flipping thirty-six switches to the dozen lamps, motion-activated stuffed animals, three train sets, and most of the lights on the six different Christmas villages interspersed throughout the rooms. The cheerful chaos increased by no less than two new glowing, singing, or dancing novelty items every year. These did not include the main overhead lights, which had to be turned off one by one as she finished with each room.

They left the single tree in the front window lit for evening foot traffic. Its magical glow bounced off every surface of colored glass in the surrounding area but reached only partway through toward the other rooms.

Nona had loosely separated the adjoined spaces into modern, old, and very old. Anything the neighbors brought her for resale she took, leaving no space unfilled. No formal system was ever implemented, which drove Genny’s organized-tax-lawyer-brain mother crazy. Cilla appreciated the decadence of chaos and helped her with the store.

Life is crazy. Embrace the unpredictable and you will be happy
, had been her grandmother’s usual response to any of life’s ups and downs.

She flicked the middle room’s overhead light off. Darkness enveloped her.

Crap, forgot the flashlight again
. She wove her way by memory and the glow from the tree toward the main room and the front door. Her knee slammed the edge of an antique glass-front cabinet.

Black Jack by Lora Leigh
Earth Bound by Christine Feehan
Road to Desire by Piper Davenport
Emmerson's Heart by Fisher, Diana
Brando 2 by J.D. Hawkins
Lush in Lace by A.J. Ridges
Fallen by Laury Falter
Unveiled (Undone by Love Book 3) by Kristina Cook
The Brotherhood of Book Hunters by Raphaël Jerusalmy, Howard Curtis
The History of Us by Leah Stewart
Our partner