Read Here in My Heart: A Novella (Echoes of the Heart) Online

Here in My Heart: A Novella (Echoes of the Heart) 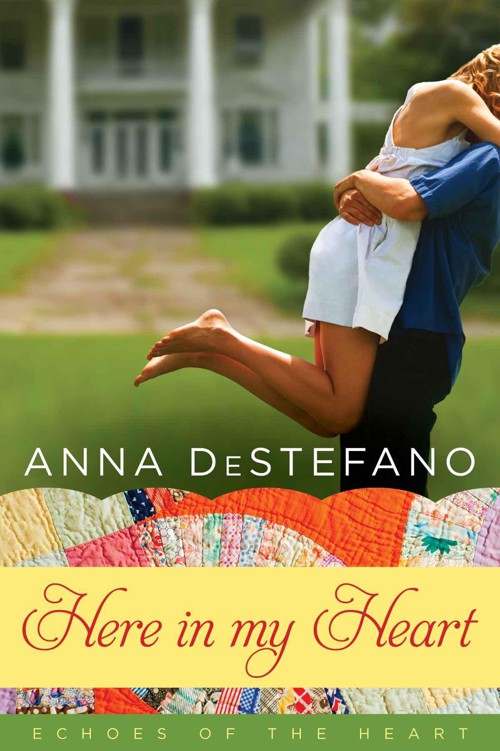 A
LSO BY
A
NNA
D
E
S
TEFANO

Love on Mimosa Lane
(A Seasons of the Heart novel)

Three Days on Mimosa Lane
(A Seasons of the Heart novel)

Christmas on Mimosa Lane
(A Seasons of the Heart novel)

A Sweetbrook Family
(previously available as
A Family for Daniel
)

A Family for Daniel

To Save a Family
(Atlanta Heroes series)

Because of a Boy
(Atlanta Heroes series)

“Baby Steps” in
Mother of the Year

To the unconditional love and acceptance that transforms a child’s future.

Sneak Peek:
Waiting for Your Love

“Here comes trouble,” Dru Hampton said to herself, as she watched the police officer stride toward her.

She’d never been handcuffed, shackled, unable to move. This had to be how it felt.

She sized him up, knowing it was a slippery slope: long legs; mysterious gaze shaded by mirrored sunglasses; dark blue T-shirt stretched over an impressive upper body, doing justice to the police insignia stenciled over his heart; navy cotton pants, loosely covering parts of him a woman would kill to see more of. Off-duty clothes had never looked less casual.

He could have been a father dropping off one of the youths attending her radKIDS graduation program. He could have been a local officer, there to change for a workout or a pickup basketball game, the way Dru’s foster brother, Travis, did at the end of a shift. There were a lot of harmless things the man approaching her could have been.

But Brad Douglas’s shoulders seemed too wide for the YMCA’s beige-painted corridor. He had the nerve to look better every time he came back to town, tempting her not to ignore him the way she had for seven years. Now the bad-boy former crush, bane of her teenage memories, was making his way to her side like a medieval knight returning from the Crusades.

She shuddered. No doubt about it. His reappearance this time was going to be anything but harmless.

She loved her life in Chandlerville, Georgia, a charming suburb northeast of Atlanta. Twenty-three years ago she’d been born somewhere on the outskirts of town, attached to nothing and no one. As an infant, she’d been blessed with the Dixons, a loving foster family who’d gifted her with a community and friends and a world where she would gladly stay forever. She’d never tire of doing whatever she could for the people here.

So why was she suddenly fighting a compulsion to flee this place that had become her dream come true?

Brad passed the last of the kid-made fall decorations on the walls and stopped an arm’s length away. She squared her shoulders.

“What are you doing here?” she asked.

He studied her in silence from behind his reflective lenses.

She’d called him, of course. It had been her responsibility to say he should get home as quickly as possible, and plan on staying for as long as his job at the Savannah Police Department would allow.

But what was he doing
there
, now, at the YMCA,
her
YMCA, making an awkward mess out of one of her favorite places? This afternoon’s celebration with her kids would be a blast. She was counting on it, to get her through the rest of the evening.

She wiped the back of her hand across her mouth, checking for crumbs left from the peanut butter and strawberry jelly sandwich she’d inhaled after working through lunch. It shouldn’t matter that up close Brad looked even taller and stronger and more protective than the striking pictures his grandmother, Vivian, kept all over her house. Dru shouldn’t care about his plans until their meeting later. His personal life was his own business.

Except every time he was back—only twice a year now, for Vivian’s birthday and Christmas—a weak part of Dru managed to care a little more. And this trip, he’d homed in on her like a detective casing a crime suspect. They usually kept out of each other’s way until he returned to the other side of the state—agreeing without ever speaking about it that there was nothing left to say to each other.

Anita Mills by Bittersweet
Double Deuce by Robert B. Parker
The Whitefire Crossing by Courtney Schafer
Beginning Again by Mary Beacock Fryer
The Winter Lodge by Susan Wiggs
Guardian of the Gate by Michelle Zink
The Cosmic Serpent by Jeremy Narby
Mick Sinatra 4: If You Don't Know Me by Now by Mallory Monroe
Money Hungry by Sharon Flake
Blimpo: The Third Circle of Heck by Dale E. Basye
Our partner