Read Here Where the Sunbeams Are Green Online

Here Where the Sunbeams Are Green 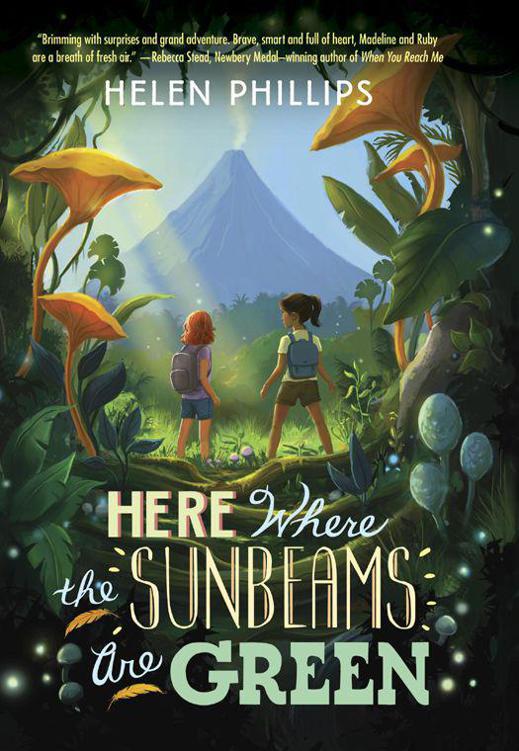 Visit us on the Web!
randomhouse.com/kids
Educators and librarians, for a variety of teaching tools, visit us at
RHTeachersLibrarians.com

For my sister, Alice,
brava and bold

S
o here we are in this shaky little airplane high above the jungle, which is kind of (very) scary. On our first flight Roo got the window seat the whole five hours, so she insisted that I get it for the second flight, which is pretty thoughtful for someone who’s only nine-almost-ten. But I really should’ve let her have the window seat this time too. Even though I’m three years older than my sister, she’s the brave one who loves flying and other dangerous things. Plus I’ve been a bit more freaked out in general lately, ever since The Weirdness began. The amazing view is basically wasted on me—the only way I can get through the wobbly ride is by pressing my forehead hard against the window, trying to pretend the jungle below is a huge green trampoline and even if we fell out of the sky we’d be totally fine.

And then—right as I’m telling myself,
Listen, Madeline Flynn Wade, you need to calm down and get a grip
—I see it.

“There’s the Lava Bird Volcano.” I lean back in my seat so she can peek out the window. Dad taught us that not all volcanoes have the classic volcano shape, but this one sure does. It’s big and blue and very, very perfect.

“Volcán Pájaro de Lava,” Ken/Neth corrects me from across the aisle, where he’s sitting next to Mom.

“Volcán Pájaro de Lava,” Roo echoes with a perfect little accent, and I’m going,
How come she has that super-great accent when I’ve been studying Spanish for three years and she’s only been studying it for one?

Just as we pass the volcano, two rainbows jump up out of the jungle and crisscross each other. They truly crisscross each other! Roo unbuckles her seat belt so she can squeeze closer to me and see the rainbows better, and we go “Ooo,
rainbows
!” and start to feel really, really excited about what we’re going to do this afternoon. Well, actually, Roo’s been really, really excited all along. She always is. I’m the one who gets nervous about things.

Anyway, Roo and I are gasping and squealing and feeling hopeful until we look across the aisle to make sure Mom is watching the rainbows and instead see Ken/Neth whispering into her ear. It gives me an automatic stomachache. Dad never would have become friends with Ken/Neth if he’d known
this
was going to happen someday. Ken/Neth on an airplane with
Dad’s
family, whispering things into Dad’s
wife’s
ear!

But I liked Ken/Neth too. Back in December when Dad brought him home for dinner and introduced him as Kenneth Candy (seriously, his last name is Candy), a longtime ecological developer and a newtime friend.

“Newtime?” Roo said, giggling, as Mom sighed and added another place mat to the table. “Is that really a word?”

“Ken’s involved in that fascinating development in Central
America,” Dad explained to Mom, pinching her waist in the way that makes her smile. “The one I’ve told you about, remember, that opened a couple years ago? It’s won the World’s Greenest Spa award for two years running. They’re doing revolutionary work in the field of environmental development. It’s the way of the future, Via. And the location is unbelievable—virtually untouched jungle on the flanks of a volcano. An ornithologist’s dream!” Dad paused, and all the enthusiasm drained out of his voice. “Of course, it would’ve been more of an ornithologist’s dream a few years back, before the Lava-Throated Volcano trogon was confirmed extinct.”

“The most elusive bird in the world,” Dad said dreamily as we sat down to eat, “long before it went extinct. Spectacular plumage but so shy—hardly ever let anyone get a good look at it. The females were especially reclusive. Even if you managed to spot a male, he’d never give you a hint about the location of his mate or their nest. They were monogamous, mated for life.”

Mom looked at Dad, shaking her head. “I still can’t believe they’d build a spa right in the habitat of a rare trogon like that.”

“
Former
habitat,” Ken Candy corrected her, chomping down on a big mouthful of spinach salad. “Extinct”—chew—“is”—chew—“extinct,” he said sadly (or at least as sadly as you can while chewing), almost as if someone from his own family had died. But really it was more like someone from Dad’s family had died, because Dad’s the one who’s the world-class ornithologist, otherwise known as the Bird Guy.

“I love lava,” Roo said. “It’s like the planet’s own hot caramel sauce.”

“Oh, mainly just some consultation about ecological development and that sorta thing.” Ken Candy was smiling very brightly at Mom. “I’m based here in Denver but I travel there a few times a year.”

“We need more people like you doing the kind of work you’re doing,” Dad said.

“Well. Who knows. But I sure do love what I do,” Ken Candy said, pretending he wasn’t proud of himself. “And not to talk business at the dinner table,” he continued, “but … La Lava is seeking an expert ornithologist to help us track and catalog the native bird species, both for the benefit of our more curious guests and to further our green mission. What happened to the Lava-Throat should never happen again.”

“It’s quite a dazzling array of avian life out there, lemme tell ya,” Ken Candy added.

After dinner Ken Candy pulled some candy from his pockets and offered it to me and Roo. He just so happened to have a mini Snickers (my favorite) and a mini Butterfinger (Roo’s favorite). “Since Candy is my last name,” he explained with a wink. He was nice and also cute, even with spinach in his teeth, and I felt shy. Now I just wish Dad had never met him.

Because look where we are today, Ken/Neth pointing out the airplane window at the rainbows and leaning in too close to Mom to whisper, “Well, that’s an omen if I’ve ever seen one, right, Sylvia?”

“Uh-huh,” Mom says absentmindedly, because she’s thinking about Dad. I can tell.

When Ken/Neth came over to our house back in February, after Mom called him to complain because Dad’s trip had just gotten extended for the first time, he asked us to call him Ken rather than Mr. Candy.

“Can I call you Neth instead?” I said. I knew I was being mean, but I was mad and sad about Dad, and he seemed like the best person to blame.

But instead of being offended, Ken/Neth was charmed. He thought I was being friendly.

“That would be great,” he said, looking up at me and Roo. “That would be totally great if you called me Neth. No one’s ever done that before.” It made him feel special, like I was giving him a nickname. So I never call him Neth. Or Ken. Or anything. Except in my head, where he’s Ken/Neth.

Roo can’t sit still in her airplane seat. She reaches over across the little aisle and starts poking at Mom’s arm, asking in a voice that’s way too loud: “What’s an omen? Hey, what’s an omen?”

“
¡Señorita! ¡Señorita!
” a woman’s voice crackles over the loudspeaker and says a bunch of words in Spanish. Then, again, “
¡Señorita!
”

“Hey, Roo-by, they’re talking to you!” Ken/Neth says, pulling himself away from Mom’s ear.

The third time Ken/Neth came over was back in March, when Dad had extended his trip for the second time. That day he called my sister Roo, and I had to teach him that only three people are allowed to call Ruby that—I nicknamed Roo when she was three and I was six, so I get to decide these kinds of things. Ever since then he’s been careful. Every time he calls her Ruby I feel proud of myself. I like how he begins “Roo—” and then squirmingly adds the “by.” I also make sure he never calls me Mad, because I only let people call me Mad once I’ve given them permission.

“They’re talking to you,
señorita
,” Ken/Neth tells her. He’s the only one of us who really speaks any Spanish, and it was already bugging me in the airport hearing Mom going, Oh, Ken, what did he say? Oh, Ken, can you translate the menu for us?

The voice on the loudspeaker sounds more and more annoyed, and at the front of the short aisle the flight attendant is glaring at Roo. “They’re telling you to buckle up!” Ken/Neth translates.

One Corpse Too Many by Ellis Peters
Pies & Peril by Janel Gradowski
His Majesty's Elephant by Judith Tarr
Darkvision by Cordell, Bruce R.
Revolution in the Underground by Michaels, S. J.
The Cinderella Moment by Jennifer Kloester
The Mark of Ran by Paul Kearney
Privy to the Dead by Sheila Connolly
At the Tycoon's Command by Shawna Delacourt
The Loved and the Lost by Lory Kaufman
Our partner