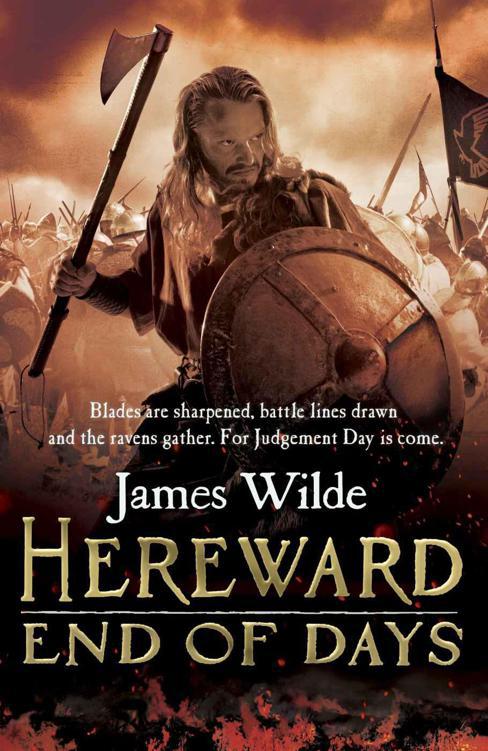 A
BOUT THE
B
OOK

1071. Five years have passed since the Norman’s crushing victory at Hastings. England reels under the savage rule of its new king, the one they call ‘the Bastard’. The North has been left a wasteland – villages torched, innocents put to the sword, land stolen. Rats feed upon fields of the dead.

It seems no atrocity is too great to ensure William’s iron grip upon the crown. Now his cold gaze is turning towards the last stronghold of the English resistance. After these years of struggle, he will brook no further challenge to his power. His vast army is massing; his machines of war are being made ready.

In their fortress on the Isle of Ely, the English rebels have put their faith in one man – a warrior, a leader and a master of the art of waging war. His name is Hereward, and he has planned an uprising that will sweep the hated king from the throne once and for all.

But Hereward has disappeared – and with him, it seems, England’s hopes of victory. Can this great hero really have abandoned his people? Time is running out, for King William is about to begin his final, devastating assault that will surely mark the end of days . . .

Here is a heart-pounding tale of heroism, treachery and sacrifice – and the bloodiest rebellion England has ever known . . . 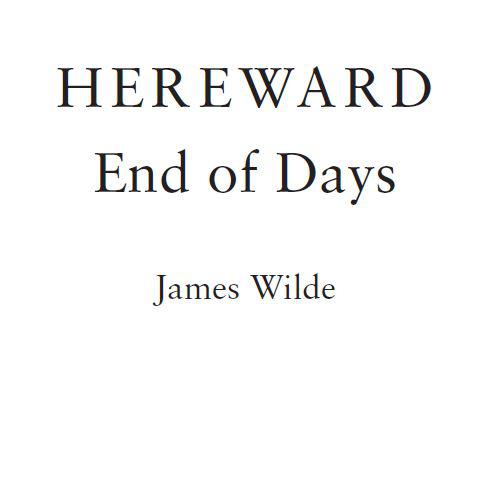 SOON THE GRAVES
would give up their dead.

To the west, a red gash wounded the darkening sky. The cold was starting to creep across the silent wetlands. And in the cemetery beside Ely’s great church shadows merged, the grassy mounds of the burials little more than smudges in the gloom.

Wardric knew this was true, for the priest had announced it to the world that very morn while he sat, bored, at the back of the chill nave, watching the blood drain from his mother’s and father’s faces. Crouching beside the gnarled hawthorn next to the cemetery fence, the boy watched the graves with wide eyes. Soon, soon, the tumble of sod, the bony hands reaching up to the sky. And then the booming verdict of the Lord. He licked his dry lips, afraid of what he might see, but excited too.

Wardric had known eight summers, and although his kin said most of them had been hard under the grip of the cruel King William, he remembered only fishing and swimming and games and his father teaching him how to carve an angel out of deer horn. Now, though, all that was to end.

For a while he waited, his heart beating faster as the sun slipped towards the horizon. The time seemed right. The breeze smelled of endings. Ashes floated from the home-fires, and he could taste the rot drifting from Dedman’s Bog. Finally he glimpsed movement.

Wardric stiffened, but his heart slowed when he realized the graves were not yawning. It was only Oswyn, old Oswyn the potter, no doubt on his way to the saint’s shrine. Every day at dusk he trudged the same path. Back bowed, eyes never raised from the turf, white hair aglow, he clutched his offering, ready to mutter his prayers for the son he had lost in the spring floods.

The boy sagged back.

But only for a moment. He glimpsed another movement across the edge of his vision, a shadow taking on weight and form as it caught the dying rays of the sun. A man, swathed in a cloak, hood pulled high, striding with purpose. Curious, Wardric leaned forward.

A spear’s throw away from him, the cloaked figure caught up with Oswyn. Startled, the old man spun round, but his shoulders soon slumped back under their doleful weight as he muttered a greeting and turned back to his path. The blow came from nowhere, a fist hammered into the back of the potter’s head.

Oswyn crashed across one of the graves, stunned. His attacker leaned over him, snarled his fist in the front of the man’s tunic and half hauled him up. As his senses returned to him, the old man began to splutter. His fingers clawed the air. The other man shook him and murmured, ‘Hold your tongue.’ The words drifted across the still cemetery.

Wardric felt puzzled to hear no threat there. That command almost seemed laced with a gentle humour. Careful not to make a sound, he eased back under the cover of the hawthorn.

‘What do you want of me?’ the old man moaned.

Oswyn stared, baffled. ‘I have done you no harm.’

‘No, you have done me no harm. There is not a man or woman in Ely that you have harmed. You are well liked, old man. That is why I chose you.’

Gripped by the encounter, Wardric dug his fingers into the soft turf, squinting through the half-light to try to discern the identity of the hooded man. The attacker’s back was turned, but he seemed much younger than the potter.

Oswyn reached out a pleading hand. ‘I have no coin …’ His voice wavered. Like Wardric, he could make no sense of what was happening here.

The attacker dipped a hand inside his cloak and then pulled it back. A short blade shone in the ruddy glow of the sunset. It hung in the air for only a moment before its owner plunged it into his victim’s chest.

Wardric jerked back in horror, his hand flying to his mouth. How he prevented himself from crying out he did not know, but he was sure that if he made the slightest sound the hooded man would turn on him next.

The attacker pressed his free hand across the potter’s mouth to stifle his cries. Wardric clutched his ears to drive out those awful muffled sounds.

‘You are but the first,’ the hooded man hissed.

As the potter thrashed in his death throes, his attacker removed his hand and stepped back, watching the end of the old man’s days. Oswyn must have spoken, for the murderer said as if in reply, ‘Your protector has abandoned you.’

‘God has not abandoned us,’ the potter croaked.

The hooded man laughed. ‘Night is falling fast upon Ely, and upon the English. Be thankful you will not be here to witness it.’

And then he fell upon Oswyn like a wild beast, stabbing in a frenzy.

Rigid with terror, Wardric could not look away. Even when the savagery had ended and the old man’s shudders had stilled, even when the murderer had swept away across the cemetery,
the boy remained, staring into the dark, afraid to move. He would never speak of this thing.

The Devil had come to Ely and nothing would be the same again.

THE WIND MOANED
through the high branches and the skulls on the witch-charm rattled out a warning. Ravens, crows, gulls, oystercatchers and stonechats the two men spied as they looked up into the ash tree, all of them joined in death.

Madulf shuddered and pulled his cloak tighter around him. His unease only made his sullen face seem darker. ‘There are things abroad that I would not see,’ he murmured.

‘Are you a child, afrit of the dark?’ his brother Sighard said with a grin. His hair was red, his face pale and freckled, a rarity among the English rebels who had gathered under Hereward’s standard in Ely. And yet even as he spoke he felt his neck prickle, and he peered into the darkening woods.

‘You think the witch would have left this here for no reason?’ the other man hissed. ‘You are the child, simple in the head.’

‘Let us not argue,’ Sighard pleaded. ‘These days it is all we seem to do. I worry that this struggle drives us apart.’

Madulf pushed past him back on to the track, allowing himself one last worried glance at the ghastly charm. Sighard followed. Like his brother, he had left his spear and his shield beneath his bed. Under his threadbare green cloak, he wore little more than rags. This night he would be no warrior, just a
mud-spattered ceorl with straw behind his ears, and with luck no one would pay him much attention. There were eyes everywhere, even in these lonely woods. Nowhere was safe any more.

‘We argue because hope fades fast,’ Madulf called back, pulling up his hood as he hurried along the old straight track. ‘Outside the church this morn, one of the monks cried out that it was the harvest time for man. No one spoke out against him. And now … now we have been abandoned by the only one who can save us.’

Another witch-charm rattled overhead. They were everywhere, a last desperate attempt to ward off what all feared.

‘This night we may make things right again,’ Sighard replied, hoping his brother had not seen the charm.

‘Aye, crook your finger and wish,’ Madulf sneered. All his worries seemed to flood out of him in one deluge and he whirled, grabbing Sighard by the shoulders. ‘The End of Days has come like a midwinter gale. It howls across all England, and no man will escape its knives.’

‘You do not know this to be true.’

‘Can you not see?’ Madulf clutched his head. ‘In the far north, mortal remains clog the rivers and the streams and line the byways like markers on the road to hell. More rats than men now live in Northumbria, so say those who have fled the devastation. Hunger bloats the bellies of children and turns men and women to naught but skin upon bone. And the sickness has brought silence to whole villages, leaving black lips and black hands and feet in its passing. You know this to be true!’

‘We still have hope, brother.’

‘Not any more.’ Madulf’s shoulders sagged and he turned back to the track.

Sighard spat. It was the invaders who had brought the world to this. Those bastard Normans, with their bastard king, who had stolen the English crown. He tried to fan the flames of hatred in his heart. It had kept him warm during the bitter
struggle against the enemy, but no more. These days he felt the cold touch of fear more often than not.

El espejo en el espejo by Michael Ende
The Honorable Marksley by Sherry Lynn Ferguson
Death and the Maiden by Sheila Radley
The Search by Suzanne Fisher
Dynomite!: Good Times, Bad Times, Our Times--A Memoir by Jimmie Walker, Sal Manna
Bane by Brenda Jackson
Wanting It All: A Naked Men Novel by Christi Barth
Who Killed Tiffany Jones? by Mavis Kaye
Chase Baker and the Golden Condor: (A Chase Baker Thriller Series No. 2) by Vincent Zandri
Honored: An Alpha Mob Romance (City Series Book 4) by Hamel, B. B.
Our partner