Read Hero of the Empire: The Boer War, a Daring Escape, and the Making of Winston Churchill Online

Hero of the Empire: The Boer War, a Daring Escape, and the Making of Winston Churchill 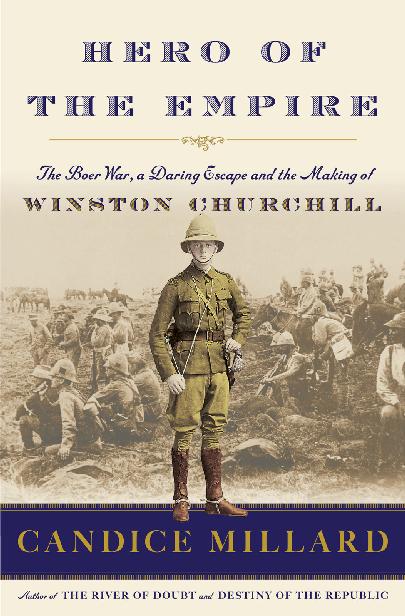 Hero of the Empire: The Boer War, a Daring Escape, and the Making of Winston Churchill

From
New York Times
bestselling author of
Destiny of the Republic
and
The River of Doubt
, a thrilling narrative of Winston Churchill's extraordinary and little-known exploits during the Boer War

At age twenty-four, Winston Churchill was utterly convinced it was his destiny to become prime minister of England one day, despite the fact he had just lost his first election campaign for Parliament.  He believed that to achieve his goal he must do something spectacular on the battlefield.  Despite deliberately putting himself in extreme danger as a British Army officer in colonial wars in India and Sudan, and as a journalist covering a Cuban uprising against the Spanish, glory and fame had eluded him.
Churchill arrived in South Africa in 1899, valet and crates of vintage wine in tow, there to cover the brutal colonial war the British were fighting with Boer rebels. But just two weeks after his arrival, the soldiers he was accompanying on an armored train were ambushed, and Churchill was taken prisoner.  Remarkably, he pulled off a daring escape--but then had to traverse hundreds of miles of enemy territory, alone, with nothing but a crumpled wad of cash, four slabs of chocolate, and his wits to guide him.
The story of his escape is incredible enough, but then Churchill enlisted, returned to South Africa, fought in several battles, and ultimately liberated the men with whom he had been imprisoned.
Churchill would later remark that this period, "could I have seen my future, was to lay the foundations of my later life." Millard spins an epic story of bravery, savagery, and chance encounters with a cast of historical characters—including Rudyard Kipling, Lord Kitchener, and Mohandas Gandhi—with whom he would later share the world stage. But
Hero of the Empire
is more than an adventure story, for the lessons Churchill took from the Boer War would profoundly affect 20th century history.

An Amazon Best Book of September 2016:
It should come as no surprise that Winston Churchill was an ambitious, young go-getter long before he became Sir Winston Churchill—but you might be surprised by how interesting his young life was. The son of Lord Randolph Churchill—who ascended to the position of leader of the House of Commons and Chancellor of the Exchequer before dying at the age of forty five—Winston Churchill set off as a young man to find glory on the battlefield, with an eye toward ultimately emulating his father’s success in politics. The young Winston played a part in four wars on three different continents, the last of which was the Boer War. His experience as a prisoner in that war is the jumping off point of this book, and author Millard puts her narrative gifts to work as she describes his harrowing escape, setting the man in his time, and illustrating the man to describe his times. –
Chris Schluep, The Amazon Book Review

"Over the years Ms. Millard had made a stylish niche for herself zooming in on a brief, pivotal chapter in the life of a historical figure and turning it into a legitimate feature-length production...The story Ms. Millard tells here is no less cinematic or dramatic...As involving as a popcorn thriller...Excellent."
*—
Jennifer Senior,
The New York Times

*"Thanks to Millard's formidable storytelling skills, she has succeeded in infusing this familiar narrative with color, excitement and life."
—
Washington Post***

“Millard’s tome is a slam-bang study of Churchill’s wit and wile as he navigates the Boer War like [a] proto-James Bond.”
*
—
USA Today***

Destiny of the Republic:
A Tale of Madness, Medicine and the Murder of a President 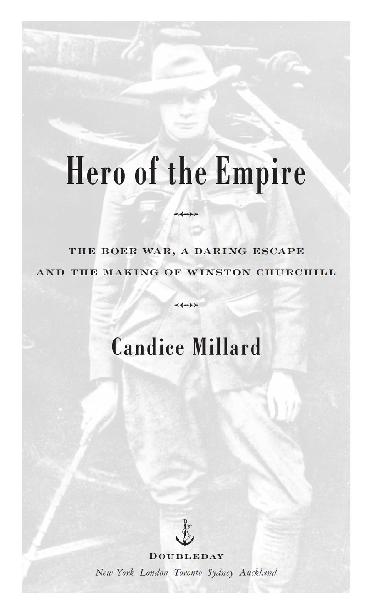 DOUBLEDAY and the portrayal of an anchor with a dolphin are registered trademarks of Penguin Random House LLC.

Title: Hero of the empire : the Boer war, a daring escape and the making of Winston Churchill / Candice Millard.

CHAPTER 7:
The Blackest of All Days

CHAPTER 8:
Land of Stone and Scrub

CHAPTER 10:
A Pity and a Blunder

CHAPTER 11:
Into the Lion’s Jaws

CHAPTER 13:
To Submit, to Obey, to Endure

CHAPTER 15:
A City of the Dead

CHAPTER 17:
A Scheme of Desperate and Magnificent Audacity

IN THE HEART OF THE ENEMY’S COUNTRY

CHAPTER 24:
The Light of Hope

CHAPTER 26:
The Red and the Blue

C
rouching in darkness outside the prison fence in wartime southern Africa, Winston Churchill could still hear the voices of the guards on the other side. Seizing his chance an hour earlier, the twenty-five-year-old had scaled the high, corrugated-iron paling that enclosed the prison yard. But now he was trapped in a new dilemma. He could not remain where he was. At any moment, he could be discovered and shot by the guards or by the soldiers who patrolled the dark, surrounding streets of Pretoria, the capital of the enemy Boer republic. Yet neither could he run. His hopes for survival depended on two other prisoners, who were still inside the wall. In the long minutes since he had dropped down into the darkness, they had not appeared.

From the moment he had been taken as a prisoner of war, Churchill had dreamed of reclaiming his freedom, hatching scheme after scheme, each more elaborate than the last. In the end, however, the plan that had actually brought him over the fence was not his own. The two other English prisoners had plotted the escape, and agreed only with great reluctance to bring him along. They also carried the provisions that were supposed to sustain all three of them as they tried to cross nearly three hundred miles of enemy territory. Unable even to climb back into his hated captivity, Churchill found
himself alone, hiding in the low, ragged shrubs that lined the fence, with no idea what to do next.