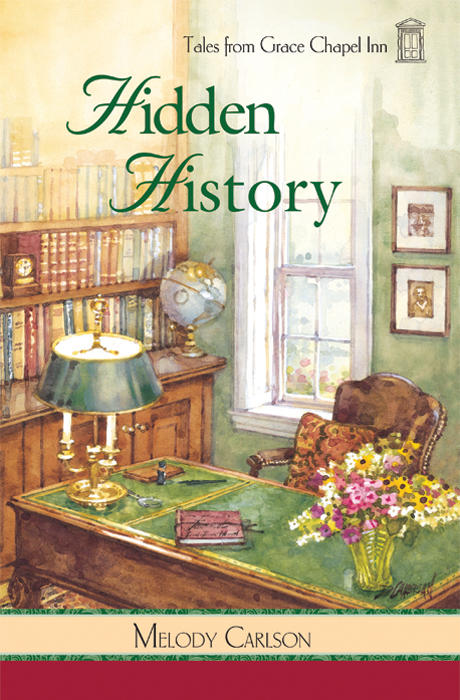 Copyright © 2007 by Guideposts. All rights reserved.

This book, or parts thereof, may not be reproduced, stored in a retrieval system, or transmitted in any form or by any means, electronic, mechanical, photocopying, recording or otherwise, without the written permission of the publisher.

Guideposts, Ideals
and
Tales from Grace Chapel Inn
are registered trademarks of Guideposts.

A place where one can be
refreshed and encouraged,
a place of hope and healing,
a place where God is at home.

T
he day was clear and sunny, and a crisp breeze rustled the leaves of the big maple tree in front of the large Victorian house. Alice Howard breathed deeply as she strolled up the walkway, pausing to admire her sister Jane’s terra-cotta pots, now spilling over with chrysanthemums in a rich array of russets, reds and golds. Alice could feel autumn in the air, and she was ready for this long hot summer to come to an end. It was still a bit early, but she looked forward to things like leaves crunching underfoot and steaming mugs of hot cider and orange pumpkins piled by the front door. She sighed with sweet contentment as she walked up the front steps to their wide and welcoming front porch.

“Hello there,” called her older sister from the shadows.

“Oh!” Alice jumped in surprise. “Goodness, I didn’t even see you there, Louise.”

Louise chuckled. “I
thought
you were daydreaming.” She patted the swing. “Come sit with me and chat.”

Alice had barely set her bag down and joined Louise on
the swing before Wendell sprang from the corner and landed on her lap. “Hey, big boy,” she crooned. “How are you doing?” She was answered with a contented purring sound as the heavy cat settled himself comfortably in her lap.

“Silly old cat,” said Louise as she reached over and scratched his head. “You would think that he would want a cooler place to sleep on a warm afternoon.”

“Oh, Wendell’s always been a snuggler.”

“Care for some lemonade?” asked Louise as she reached for the pitcher and an empty glass.

Louise handed her the cool glass. “How was work?”

“Pretty busy for the middle of the week,” said Alice. “I guess everyone was out trying to enjoy the last of their summer vacations. We had a car wreck involving a family of five, a girl who’d been thrown from a horse, as well as several cases of food poisoning from the Pine Grove youth camp.”

“Good grief!” exclaimed Louise. “Were they all right?”

“Yes, thankfully, by the end of the day not one of our patients was in anything worse than fair condition and all appear to be headed toward full recovery.”

“Thank goodness for that. Your job is really exciting at times.”

Alice smiled. “At times, but mostly it’s routine. I’m grateful for that. I can do without days like today.”

Louise patted her on the knee. “Well, you should be relieved to know that we will not have any guests until tomorrow. We will all enjoy a nice quiet evening tonight.”

“The last I saw she was in the kitchen about knee-deep in lemons.”

“Actually, Aunt Ethel dropped off two boxes of lemons this morning. According to her, Lloyd’s brother from California showed up with about a ‘truck load’ of them. Lloyd has been sharing them with everyone in town. Jane started out with lemonade, but that barely made a dent in them.” Louise chuckled. “I will say this, the house smells delicious.”

“Well, it’s a good way to bring summer to an end,” said Alice.

“It does feel as if fall is creeping up on us.”

Alice leaned her head against the back of the swing and sighed. “Can you believe it’s been nearly a year since Father passed away?”

“It does not seem possible.”

“Yes, that is one date I will not forget, but I have never been as good as you with dates.”

“Somehow remembering dates has always been easy for me.” Alice set down her empty glass. “Even as a little girl I knew everyone’s birthday and Mother and Father’s anniversary and all sorts of little things. In the last few years Father often relied on me to be his walking calendar.” She chuckled. “In fact, I just reminded Pastor Thompson that next Sunday is Grandparents Day. I hope he didn’t think I was trying to interfere. Father always liked to give the grandmothers a carnation on that day.”

Louise adjusted her glasses as she counted the stitches on her latest knitting project. “Well, I will probably never be the lucky recipient of a Grandparents Day carnation.”

Just then the youngest sister stepped out with a plate of lemon squares. “What’s this you’re complaining about, Louise?” she asked as she set the china plate on the nearby wicker table, nodding an invitation.

“Not being a grandmother,” Alice answered for Louise as she reached for a sticky yellow bar. “Oh, Jane, these look lovely.”

“I am not complaining,” said Louise as she set aside her knitting in exchange for a lemon square. “I just doubt that Cynthia will ever make me a grandmother. Goodness knows I would be thrilled just to see her married and settled down. But, of course, she is a busy career woman, and I think she is waiting for Mr. Right to come along.”

“What’s wrong with that?” said Jane as she refilled their glasses. “I was older than Cynthia when I married, and sometimes I wish I’d waited a little longer myself.”

Alice reached over and patted Jane’s hand. “How were you to know things would turn out that way with Justin back then, Jane?”

“Panicked?” said Louise with raised brows. “It is hard to imagine your panicking about anything, Jane.”

Jane tossed her oldest sister an indulgent smile. “Oh, sure, I probably come across as in control most of the time, especially if I have a lot of confidence in an area, cooking or gardening, for instance.”

“Or decorating or art,” added Alice.

“But when it comes to romance…” Jane sadly shook her head. “Well, I’m just not too savvy about things of the heart.”

“Well, speak for yourself,” said Louise. “I think I fared quite well in the love and romance arena. Eliot and I came close to celebrating forty years of blissful marriage before he was called to his eternal reward.”

“Blissful?” Jane’s brow furrowed slightly. “I can remember
a couple of times when you and Eliot weren’t even speaking to each other. How about that Christmas back in 1978 when you showed up here by yourself, and Father had to—”

“Oh, we don’t need to go back there, Jane.” Alice smoothed her hand over Wendell’s furry coat. “Perhaps Louise’s memories have grown sweeter with the passing of time.”

Louise nodded. “Yes, Alice is absolutely right. I probably have forgotten a few unhappy things over the past few years, but for the most part, Eliot and I were quite content together.”

“Isn’t it interesting that of the three Howard women, only one of us had a happy marriage?” Jane asked.

“Father and Mother had a very happy marriage,” said Alice.

“Yes,” agreed Louise. “I never saw any other couple more in love than those two.”

Jane reached for a second lemon square. “Well, I guess I’ll have to take your word for that.”

Alice nodded. “It’s true, Jane. They were completely devoted to each other. How Father grieved for Mother after she died. It was no surprise that he never married again.”

“And, goodness knows, he had his chances,” said Louise.

“That’s right,” said Alice. “There was a time when it seemed like every widow in Acorn Hill was chasing him.”