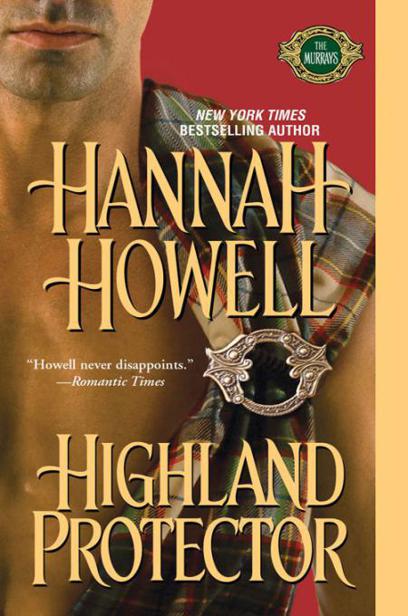 “Lass, have ye gone to sleep?”

The hint of amusement in his voice caused her to lift her head and smile at him. Ilsabeth saw the way his eyes abruptly darkened. Her body responded to that look with a heat that nearly made her gasp. Suddenly she understood why some of her married kinswomen would blush when their men looked at them. They were seeing that look in their men’s eyes.

Simon softly cursed even as he pulled her face closer to his, unable to resist the urge to kiss her, to taste that lush mouth that tempted him every time he looked at it. When Ilsabeth smiled at him, her eyes all soft and warm, his will crumbled. All he could think of was how much he wanted her to keep looking at him like that. It was madness.

She was his weakness, he thought with a touch of alarm. He had spent years hardening himself in heart, body, and mind, yet this small woman with big blue eyes easily cut through his armor with a smile. Simon knew he ought to run far and fast, but then his lips touched hers, and all his fears were burned away by the heat that flooded his body....

All copyrighted material within is
Attributor Protected.

All Kensington titles, imprints and distributed lines are available at special quantity discounts for bulk purchases for sales promotion, premiums, fund-raising, educational or institutional use.

“I bow in awe of the sacrifices ye are willing to make for our great cause, Walter.”

“Dinnae bow too low, dear cousin, for my sacrifice will be but short-lived.”

“How so? I do believe that anyone accused of murdering a king’s mon is doomed to be, er, shortlived and treason brings one a most horrific death.”

Ilsabeth halted, the words
murder
and
treason
stopping her dead in the act of sneaking up on her betrothed. She had left him an hour earlier, hidden away in the woods, and then slipped back to his home to see if she could discover why he had begun to act strangely. Another woman had been her suspicion. Sir Walter Hepbourn was a virile man and had not been expending much of that virility on her. Ilsabeth had begun to suspect that he was heartily feeding his manly appetites somewhere else, and even though they were not yet wed, such faithlessness was not something she could tolerate.

Murder and treason had never crossed her mind. And the murder of a king’s man? That was treason in and of itself. The mere thought of such a crime sent chills down her spine. Why would Walter have anything to do with such crimes, or even know enough about them to speak of them?

Keeping to the shadows cast by Walter’s large stone house, Ilsabeth dropped to her belly and inched closer. Walter and his cousin David sat side by side on a large stone bench at the end of the garden Walter’s rather overbearing mother took such pride in. Both men were drinking and enjoying the early evening, undoubtedly savoring the encroaching cool after a surprisingly hot, sunny day. It was a strange place to talk of such dark subjects as murder and treason.

“I intend to rescue my dearly betrothed, of course,” said Walter. “She will have to flee Scotland but I have a fine wee house on the coast of France in which I can keep her. Her gratitude will keep me warm for many a night.”

“Jesu, ye are nay still thinking of marrying her, are ye? T’was bad enough when she was just an Armstrong wench, but then she will be seen as the daughter of traitors.”

The shock and disgust weighting every word David spoke stung Ilsabeth’s pride like nettles but she hastily swallowed her gasp of furious outrage.

Walter gave a harsh laugh. “Still? I
ne’er
intended to wed her. I thought ye kenned that. She is an Armstrong, for sweet pity’s sake. M’father would spin in his grave if I tried to mix his family’s blood with that of one of those low reivers. My mother would soon join him. Nay, I but played the game.

Howbeit, she is a sweet morsel and I dinnae wish to see her in her grave until I have had a wee taste.”

“Ye mean ye havenae had a wee taste yet?”

“I tried but it quickly became clear that someone taught her the value of her maidenhead.”

“Ah, weel, I had thought ye had gotten betrothed to her so that ye could take that with ease.”

“Nay, it was the best way to get close to her kinsmen, aye? I can see I erred in nay telling ye all my plans. We needed someone to bear the blame and I decided her family would serve. Now I will nay only be free of suspicion, but free of her cursed family as weel. If I step right, I may e’en get some of their land once our angry king rids this land of them. Or I shall get it when the new king is seated upon the throne.”

“Clever. If it works. The Armstrongs being what they are, ‘tis reasonable to think all blame could easily be shifted onto their shoulders, but will it stay there? We are close to ridding ourselves of that foolish king, his sycophants, and all those who lead him where they wish him to go. We cannae afford to have any suspicion turning our way.”

“It willnae. The king’s supporters will be so busy hunting Armstrongs they willnae have time left to look anywhere else.” Walter stood up and stretched. “Come, let us go inside. The insects begin to feed upon me and we need to plan our next step most carefully. When next we meet with our compatriots, I want to be able to present a finely polished plan they will all be willing to follow.”

David moved to follow him. “I was hoping for an early night and a warm wench.”

“We will soon both enjoy those pleasures. I, too, wish to be weel rested so that I may watch those thieving Armstrongs rounded up and taken away in chains.”

Ilsabeth remained still until she was certain both men were well inside the house before she began to crawl away to the safety of the wood separating her father’s lands from Walter’s. Once within the shelter of its deep shadows, she stood up, staggered over to a tree, and emptied her belly. The sickness tore through her until her stomach hurt and her throat was raw. She then stumbled over to the next tree, slumped against it, and fumbled with the small wineskin attached to her girdle. It took several hearty rinses as well as several deep drinks of the cool cider to clear the vile taste from her mouth, a bitter taste she knew was not wholly caused by her sickness.

“Bastard,” she whispered when what she really wanted to do was scream the word to the heavens until her ears rang.

She had been such a fool. Beguiled by a handsome man, the thought of finally having a home of her own, and children. Walter had used her, had used her family who had welcomed him as one of their own.

Her family! Ilsabeth thought the fear that surged through her would have her retching in the bushes again, but she fought that weakness. She needed to have a clear head and to stay strong. She needed to warn her family.

With her skirts hiked up to her knees, Ilsabeth raced through the woods, desperate to reach her home. She did not know when the king’s man had been killed, what the man had been doing here, or even where the body was, but instinct told her it would be found soon. From all that she had just heard, she knew it was meant to be found. Worse, she was certain Walter had left behind enough evidence with the body to point the finger of blame straight at her family. “Wait! Two, wait!”

Ilsabeth stopped so abruptly at the familiar hailing that she nearly fell on her face. Steadying herself, she turned to see her cousin Humfrey racing toward her. As she struggled to catch her breath, her scattered thoughts latched on to that hated name
Two.
When her eldest sister Ilsabeth, the firstborn, had become Sister Beatrice, the family had asked her if she would take the name, as her mother loved it so. Since she had not really liked her own name of Clara much, she had been more than willing. But, instead of a nice new name, all her siblings and cousins had begun to call her Two, or Twa. When Humfrey reached her side, she punched him in the arm mostly out of habit. It was odd, she thought, how such mundane thoughts and actions had helped to still the rising panic inside.

“Ye cannae go home,” he said, idly rubbing the place on his arm where she had struck him.

“I have to,” she said. “I need to warn my family of the plot against them.”

“Ye mean the one that has the king’s soldiers at the gates yelling about murder and treason?”

Muttering curses that had the young Humfrey blushing faintly, Ilsabeth abruptly sat down. “I am too late. This is all Walter’s doing.”

Black Flame by Ruby Laska
Bertie and the Kinky Politician by Mike A Vickers
Comstock Cross Fire by Gary Franklin
The Light in the Forest by Conrad Richter
No Flesh Shall Be Spared by Carnell, Thom
Sister Mischief by Laura Goode
El umbral by Patrick Senécal
Dark Legacy by Anna Destefano
Wrecked by H.P. Landry
Mistaken Identity (Women's Fantasies) by Renarde, Giselle
Our partner