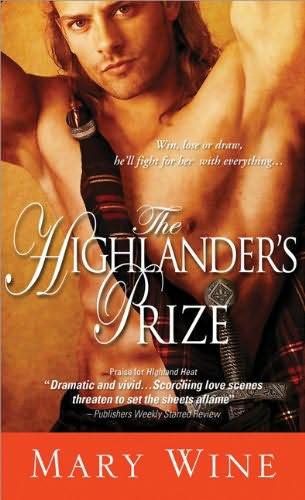 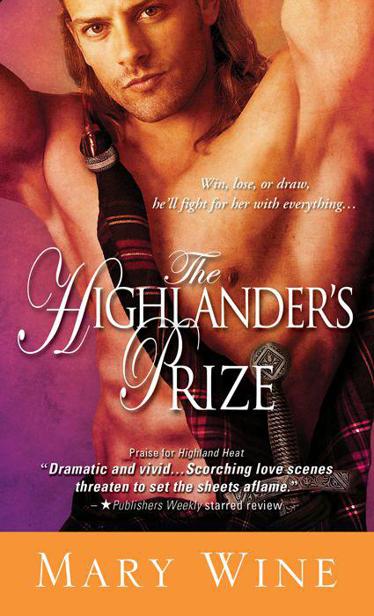 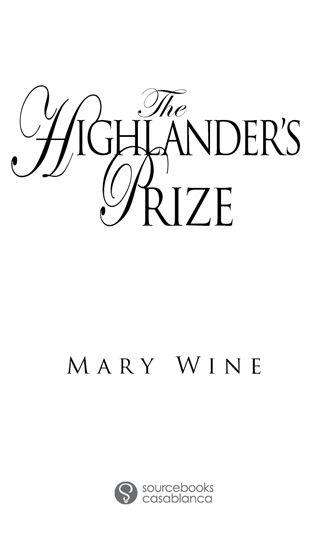 This one is for the amazing Sylvia Day,

a guru of a mentor and the best

friend anyone could ask for.

She’s a great writer too!

Clarrisa jerked back as one of the men escorting her hit the fabric covering the top of the wagon she rode inside of. An imprint of his fist was clearly visible for a moment.

“Best keep back, my dove. These Scots are foul-tempered creatures, to be sure. We’ve left civilization behind us in England.” There was a note of longing in Maud’s voice Clarrisa tried to ignore. She couldn’t afford to be melancholy. Her uncle’s word had been given, so she would be staying in Scotland, no matter her feelings on the matter.

Better
to
avoid
thinking
about
how
she
felt; better to try to believe her future would be bright.

“The world is in a dark humor,” Clarrisa muttered. Her companion lifted the gold cross hanging from her girdle chain and kissed it. “I fear we need a better plan than waiting for divine help, Maud.”

Maud’s eyes widened. Faster than a flash, she reached over and tugged one of Clarrisa’s long braids. Pain shot across her scalp before the older woman sent to chaperone her released her hair. “You’ll mind your tongue, girl. Just because you’re royal-blooded doesn’t give you cause to be doubting that the good Lord has a hand in where you’re heading. You’re still bastard-born, so you’ll keep to your place.”

Clarrisa moved to the other side of the wagon and peeked out again. She knew well who she was. No one ever let her forget, not for as long as she could recall. Still, even legitimate daughters were expected to be obedient, so she truly had no right to be discontented.

So she would hope the future the horses were pulling her toward was a good one.

The night was dark, thick clouds covering the moon’s light. The trees looked sinister, and the wind sounded mournful as it rustled the branches. But Clarrisa didn’t reach for the cross hanging from her own waist. No, she’d place her faith in her wits and refuse to be frightened. That much was within her power. It gave her a sense of balance and allowed her to smile. Yes, her future would hold good things, because she would be wise enough to keep her demeanor kind. A shrew never prospered.

“Far past time for you to accept your lot with more humbleness,” Maud mumbled, sounding almost as uninterested as Clarrisa felt. “You should be grateful for this opportunity to better your lot. Not many bastards are given such opportunities.”

Clarrisa didn’t respond to Maud’s reminder that she was illegitimate. There wasn’t any point. Depending on who wore the crown of England, her lineage was a blessing or a curse.

“If you give the Scottish king a son—”

“It will be bastard-born, since I have heard no offer of marriage,” Clarrisa insisted.

Maud made a low sound of disapproval and pointed an aged finger at her. “Royal-blooded babes do not have to suffer the same burdens the rest of us do. In spite of the lack of blessing from the church your mother suffered, you are on your way to a bright future. Besides, this is Scotland. He’ll wed you quickly if you produce a male child. He simply doesn’t have to marry you first, because you are illegitimate. Set your mind to giving him a son, and your future will be bright.”

Clarrisa doubted Maud’s words. She lifted the edge of the wagon cover again and stared at the man nearest her. His plaid was belted around his waist, with a length of it pulled up and over his right shoulder. The fabric made a good cushion for the sword strapped to his wide back.

Maybe he was a Scotsman, but the sword made him look like any other man she had ever known. They lived for fighting. Power was the only thing they craved. Her blood was nothing more than another way to secure what the king of Scotland hungered for.

Blessing? Not for her, it wouldn’t be.

Lytge Sutherland was an earl, but he ruled like a prince on his land at the top of Scotland. Plenty of men envied him, but the wiser ones gave him deference gladly, because they knew his life was far from simple. At the moment he was feeling the weight of ten lairds, only half of whom he called friends.

“If the rumor is true, we must act,” Laird Matheson insisted. “With a York-blooded son, that bastard James will pass the crown on to an English puppet.”

“Or a king who the English will nae war with because they share common blood,” Laird Morris argued.

The room filled with angry shouts as men leaned over the tables in front of them to give their words more strength.

“Enough!” Lytge snapped. There were several cutting glares, but Matheson and Morris both sat back in their chairs. The tension in the room was so tight the earl knew he had to find a solution before the men assembled before him began fighting one another. “Let us not forget how important it is for us to stand together, or James will get his wish to disinherit his first son, a young man worthy of our loyalty. If we squabble among one another, we will have to be content with James remaining king.”

Laird Matheson snarled, “That bastard has no’ done what a king should. He gives riches to his favorites and refuses to punish thieving clans like the MacLeods! It’s his fault we’re fighting Highlander against Highlander.”

“Which is why we’re all here, united against him despite half our own kin calling it treason.” It was a younger man who spoke this time, and the earl grinned in spite of his desire to appear detached.

“Young Laird MacNicols says it clearly. We’re here because we’re united—a bond that needs to remain strong. The York lass must be eliminated before she can perform the function James desires of her. We do nae need England’s war on our soil.”

“We’ll have to find her first,” Faolan Chisholms said. “Such will nae be a simple task.”

The old earl looked around the room. There was plenty of spirit in the lairds’ eyes, but thinking the deed done would not gain them success. It would take cunning and strength, along with a healthy amount of arrogance for the man willing to try and steal from the king. Such a man would have to believe himself above failure. The earl was sitting in the right place to find him, for they were all Highlanders.

“I’ll find her and steal her.” Broen MacNicols spoke quietly—too quietly for the earl’s comfort.

The earl’s son, Norris, slammed a fist into the table, sending several of the goblets wobbling. “James neglects us and leaves good men no choice but to feud when their neighbors commit crimes, since he will not dispense judgment upon the guilty.”

“I tried to respect the king instead of falling back on old ways,” Broen snarled. “I took the matter of me father’s murder at the hands of the Grants to the king. The man would nae even see me, much less send an envoy to Donnach Grant to demand me betrothed be returned.” He flattened his hands on the tabletop, leaning over it. “I made a choice, sure enough, for I’m here, and I tell ye I will make sure the king does nae get the lass he wants while he refuses me justice for the murder of the woman I was contracted to. She died on Grant land, and I deserved more than a letter telling me she’s dead.”

Lytge Sutherland nodded and heard several of the other lairds slap the tabletop in agreement. “We place our faith in ye, Laird MacNicols. Find the York bastard, and ye’ll have me at yer back when ye demand that explanation from Donnach Grant.”

There was a solid ring of endorsement in the earl’s tone. Broen didn’t enjoy it. His father had been dead for four months, but he still felt the sting of the loss like a fresh wound. He reached up and tugged on the corner of his bonnet before quitting the chamber.

“Ye’re in a hurry.” Broen didn’t lessen his pace as Faolan Chisholms caught up with him. They’d been young boys together, and now fate had made them lairds in nearly the same season.

“There is no reason to sit at a table drinking and talking like old men. I’ve an Englishwoman to find, since that is the only way I’ll possibly see an explanation to me father’s death that will nae require spilling blood when the snow melts.”

“Aye, Sutherland will nae be giving ye his assistance otherwise, but ye need to know where to look for her before ye ride out,” Faolan insisted.

Broen stopped and faced Faolan. “If ye want to come along, ye should have stood up when the earl was looking for men to take on the burden.”

Faolan grunted. “Ye did nae give me a chance.”