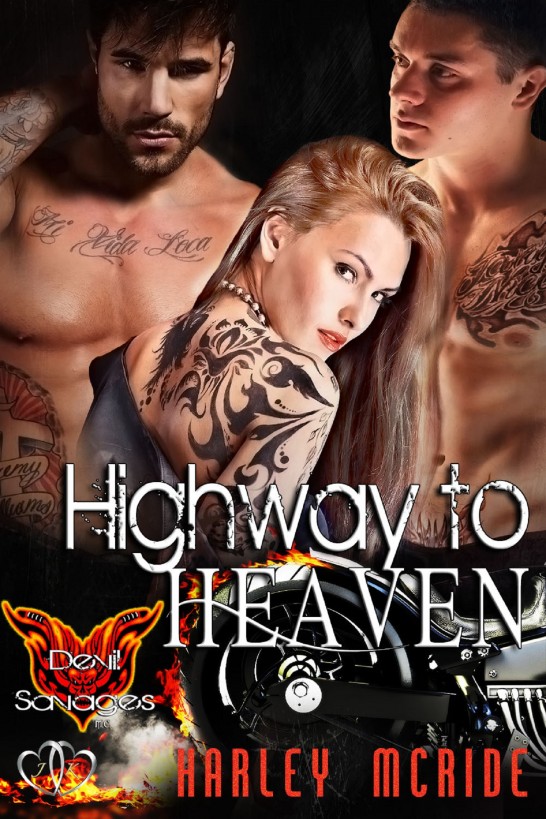 Highway to Heaven by Harley McRide

Smashwords Edition, License Notes
:
This eBook is licensed for your personal enjoyment only. This eBook
may not be re-sold or given away to other people. If you would like
to share this book with another person, please purchase an
additional copy for each recipient. If you are reading this book
and did not purchase it or it was not purchased for your use only,
then please return to Smashwords.com, and purchase your own
copy.

Thank you for respecting the hard work of
this author.

This is a work of fiction. Names, places,
characters and incidents either are the product of the author’s
imagination or are used fictitiously and any resemblance to any
actual persons, living or dead, organizations, events or locales
are entirely coincidental.

No part of this book may be reproduced,
stored in a retrieval system, or transmitted by any means without
the written permission of the author and publishing company.

Piracy
: Please always be aware of
where you are purchasing your electronic books and from whom. Only
purchase from reputable, licensed individuals such as Amazon,
Barnes & Noble, iTunes, etc. If ever in doubt, let the author
know of a suspected site illegally selling their works—remember to
include a link to the site where you have found a book you suspect
of being pirated. It only takes a moment of your time, but you will
forever have the gratitude of an author.

About the eBook Purchased
: Your
purchase of this eBook allows you to only ONE LEGAL copy for your
own personal reading on your own personal computer or device. You
do not have resale or distribution rights without the prior written
permission of both the publisher and the copyright owner of this
eBook. This eBook cannot be copied in any format, sold, or
otherwise transferred from your computer to another through upload
to a file sharing peer-to-peer program, free or for a fee, or as a
prize in any contest. Such action is illegal and in violation of
the U.S. Copyright Law. Distribution of this eBook, in whole or in
part, online, offline, in print or in any way or any other method
currently known or yet to be invented, is forbidden. If you do not
want this eBook anymore, you must delete it from your computer.

WARNING
: The unauthorized reproduction
or distribution of this copyrighted work is illegal. Criminal
copyright infringement, including infringement without monetary
gain, is investigated by the FBI and is punishable by up to 5 years
in federal prison and a fine of $250,000.

If you find any eBooks being sold or shared
illegally, please contact the author or JK Publishing, Inc. at
[email protected]

I want to send a huge thank you to all of you
who have read the Ops and Savages MC books. You have brought their
stories to life, and given them a chance to tell their story.

To my editors, without you, I’d just be an
ol’ lady with a dirty mind and a keyboard. Thank you for all the
hard work you put in to my books.

I’ve seen people from all walk’s of life—from
those who come from good homes and have loving families to those
who have had it rough since birth. Some take the easy road, some
the hard road, and some take the wrong road and never find their
way back. My wish is that no matter where you come from or what
life throws at you, that you know someone cares. Open your heart
and let people in that can support and catch you when you fall.
Blood doesn’t make family. Love does.

Raven rode his bike slowly down the drive. He
was fucking tired, and he really didn’t give two shits who the fuck
it was, if someone tried to stop him from going to his room he was
going to drop kick them. He had already called his prez and given
him the scoop. Hell, he did that before he even left that
godforsaken place. Now he just wanted to sleep, because he was
going to have to make that trip again soon with everyone—including
the Savages.

They’d set out a month ago to find and take
down Reyes, but that had not fucking worked, they hadn’t been able
to find the bastard. Their Intel had been good, the man had just
not been there. So instead they’d been watching, making sure they
were counting men, seeing what kind of army the paranoid fucker
had.

It was exhausting, and to top it off Sahara
had finally been released from the hospital and after several hours
of questions, the club decided she had been a pawn being used by
Reyes to get information.

Although it pissed him and the others off,
they had allowed her to remain at the club, by her choice of
course. She had nowhere else to go, and her sister was still
captive. It wasn’t her fault necessarily, and they were more pissed
at themselves for not seeing it sooner. Sahara wasn’t a bad girl,
just at the wrong place at the wrong time that cost them. They
wouldn’t turn their back on her when she needed them most.

He saw the front door open when he pulled up.
Great, someone was there to greet him. As he got off his bike he
turned. Shady was there, his prez, and the other guys were all
filtering out of the house. Something had gone down in the time it
had taken him to drive back,
fuck
.

“Go to bed, the Savages are going to be here
tomorrow. We’re all setting off again. This time we don’t come back
until we find him,” Shady said firmly and he looked at her.

“What happened?” he said briskly.

Shady looked over her shoulder to Creed and
he nodded. Shady had earned her place as part of the club, hell,
she and the other women had gotten the green light to start their
own club. It was only a matter of time before they became their own
chapter and The Lady Riders stepped up.

“They found a body,” Shady said. “No one we
know, and we almost missed the post. Shark found it.”

Raven felt his rage begin to rise. Fuck, was
this shit ever going to end? He needed sleep.

“What time?” he asked, running a hand down
his face.

The Savages and the Warriors were getting
together, they had been working for the last month together and
although there was still shit to work out, it was working for
them.

“This time we go, we bring everything,” Shady
said and he nodded.

Raven walked to the front door and all of the
guys murmured their hello as he walked through. They were going to
war, and he needed to get his head on straight and some sleep
before he did.

The air had an eerie chill to it that
trickled up Heaven’s spine as she scooted closer to Raven despite
her attempts to keep as much distance as she could between them.
When they’d rode out, she’d been forced to choose between Shark and
Raven to ride with instead of Colt or Gage. She really didn’t know
the Ops guys well, but Raven was one she didn’t think she wanted to
know. The man flat out scared her. He was about six foot three, two
fifty, and had dark hair that matched his dark, penetrating eyes.
He had a bit of a beard that looked so good it should be illegal.
Between the anticipation of their ride and the toxic vibe that
wrapped around her like a cocoon, she scooted closer to defeat the
shiver that threatened.

It wasn’t that he didn’t reek of pure
unadulterated sexiness, because the man had the exotic beauty of a
Greek god. Combined with his high cheekbones and bronzed skin and
the way he carried himself a mysteriousness surrounded him like
she’d ever seen. It was enough to make the ride an agonizing hell,
if not for the dangerousness that radiated off him. Now sitting
with her chest pressed against his back, she could feel it washing
off him and added to the chill that shot through her. Yet, it
warmed her in ways she didn’t want to think about.

The convoy stopped about ten miles shy of the
Mexican border and dismounted, taking a few minutes to stretch and
prepare for the last leg of the ride. If all went well, the border
patrol wouldn’t give them any grief and find their arsenal of
weapons they were carrying. If not, they had a hell of a fight to
look forward to. All of them knew what they were signing up for
when they volunteered for the trip, and prison time wasn’t
something any of them wanted. Yet, if that was their fate, so be
it. There were innocent lives at stake and it would be just a small
price to pay to free the girls being sold and used as sex slaves or
God knew what else.

Raven pulled the bike up next to Tonto, which
surprised her. The Ops and Savages had bonded and truly joined
together without segregation, letting the past beef be buried and
forgotten. With the joining chapters for each club, it made them
impenetrable. Still, there was an inkling of rivalry with some of
the guys that had yet to be dissipated, and some of the bitches
didn’t take kindly to other bitches rubbing up on their guys—Heaven
being one of them.

He killed the motor and turned to her,
waiting for her to dismount. It took a minute to realize she still
had both arms wrapped tightly around his chest before she yanked
back so fast her balance teetered. His huge paw came down on
Heaven’s thigh to steady her, those piercing dark eyes of his
shining with amusement. She turned to get off, his hand catching
her wrist in mid swing, which caused her to fall against him. She
let out a loud ‘umph’, trying her damnedest not to make eye contact
and let him see the embarrassment washing over her features.

Right to Life by Jack Ketcham
Believing the Lie by Elizabeth George
Candy Kisses by Marie, Bernadette
Sweet Southern Betrayal by Robin Covington
The Explorers by Tim Flannery
Nemesis by Bill Napier
The Duke Conspiracy by Astraea Press
Not Your Father's Founders by Arthur G. Sharp
Witches of Three: Charlene by Temple Hogan
Sacred Time by Ursula Hegi
Our partner