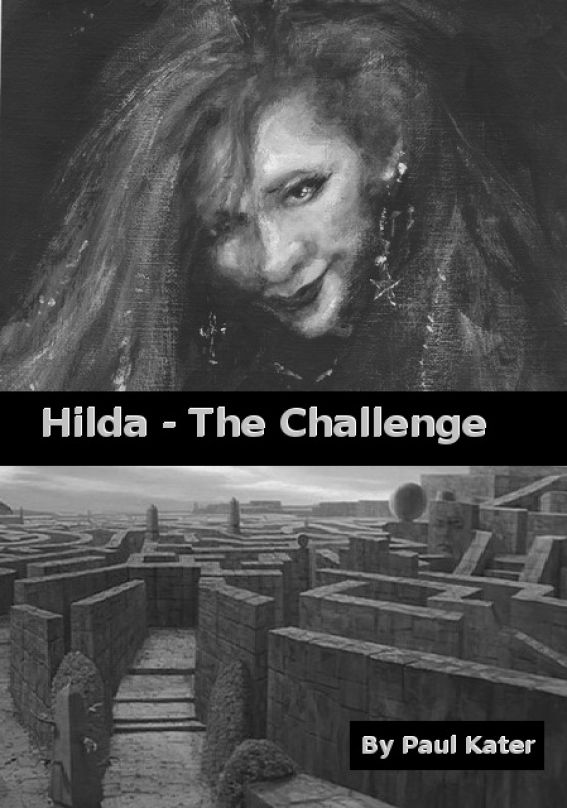 Published by the author at Smashwords -
Copyright 2010 Paul Kater

Thank you for downloading this free ebook.
You are welcome to share it with your friends. This book may be
reproduced, copied and distributed for non-commercial purposes,
provided the book remains in its complete original form. Thank you
for your support.

61. Message from
the king

Other books
by this author

A piece of paper went up in smoke. It had
travelled over many miles and even more bows. The arrow it had been
tied to was in a deplorable state as it reached the intended
recipient of the note.

"They just don't get it," the wicked witched
sighed as she picked up her tea-cup.

The goldfish did not react, they had heard
this often enough and knew what was coming.

"They keep at it like the rabbits and each
time they try to make me wild about the idea of becoming a
Godmother. Me!"

The paper had carried the seal of prince
Jordan and princess Snow-White and revealed that their fourth child
had been born.

"Good luck with that menagerie," Hilda
muttered, "I am not cut out to be a Godmother. We have plenty of
witches available that are up for that task. But not me."

The witch took a sip of her tea. "Perhaps
they should ask Magrat Garlick. Now there's a thought!" She laughed
out loud at her own joke.

The goldfish frowned at each other. This was
a new one, but they did not know Magrat.

Hilda looked annoyed. "Another letter? Can't
a witch get some peace and quiet in the morning..."

"This one is important," said the house.
Since it had been painted it was much more talkative, and Hilda
sometimes wished it would pipe down a bit.

"So now we're reading other people's mail,
eh?" She hoisted herself to her feet and headed to the door. She
gave way to the yawn, then opened the door and yanked the arrow
out.

The door closed itself as she went back to
the table. Hilda picked the paper from the arrow and started
reading. As she reached the end of the note, she compacted her
entire assortment of feelings about it into one word. "Crap."

The note was from king Herald, her longtime
adversary. He had once more sent her a challenge, to get into the
arena against Lamador, his sorceror. A challenge, as usual, to the
death. And as usual, Hilda did not feel up to that. Death was
interesting, but only if she herself was just indirectly
involved.

"Now how am I going to handle that this
time..." A challenge like this had reached her more than once
already, and Hilda would not be Hilda if she did not try to think
of a new way to counter it.

A dirtroad, in a place that many would
consider no man's land. The road consisted mainly of sand, light
brown, mixed with pebbles and rocks. On either side of the road
there was the promise of grass, but it looked like a promise that
nature could not keep. There had not been enough rain in the past
weeks for anything but the trees to survive with relative ease.

The trees had suffered from the lack of
precipitation also, as many of their leaves had turned yellow and
were curling up, as if to protect themselves from the merciless sun
that did not want to relinquish, not even for a day.

A man sat with his back against one of the
trees. Sunlight was falling on the item in his hands. He was
reading a large book, bound in leather. It was not merely large, it
was also old. Originally there had been large letters on the
leather, in gold foil, applied by hand as far as the man knew. Now
there were only faint traces of the gold remaining, and only the
difference in colour on the leather showed the words, as the
influence of daylight had changed the leather's appearance where
the gold foil had not protected it.

For the man that held it, it was a book full
of power, as it talked about magic. That was one of the reasons why
he treasured the book. It had cost him a lot to acquire it, and the
magic in it had helped him come through many a difficult day and
night.

He ate some of his food, he drank some of his
water too. Before reading on however, he carefully cleaned his
fingers. The paper that the pages were made of was old and many of
the pages were already stained, he did not want to add to that. The
book was too precious to get more smears. The words in the old book
were hard to read, so he had to trace every line with his finger as
not to lose the spot to where he had progressed.

The man moved his lips in silence as he read
a magical spell that was in the book. With an uncertain grin and an
unbelieving shake of his head he read the spell again and said it
out loud. Then, with baited breath, he waited.

"I never thought it would work," he then
admitted to himself, a grin following the words. "I am not made of
the proper magical stuff for things like this. I'll have to contend
myself with my own forms of magic, common as they may be."

Carefully he closed the book and took the
silk scarf that he had bought especially for it. He wrapped it
around the book and shoved the package in a leather pouch that was
decorated with a few stars and pentacles. There was time for a
little nap before he had to go on.

Hilda paced the room. There had to be a way
around this challenge. Taking it on was not on her mind. The 'to
the death' part still bothered her, for obvious reasons. Perhaps,
she suddenly thought, the way to do this was by being creative with
the message. It was written in a very compact way, which usually
meant nothing more than it said. And exactly this could be turned
into an advantage.

She tapped the paper, where it said 'to the
death'. One thing was however not specified. It did not say whose
death.

Hilda sat in front of her magical mirror and
looked at the affairs that were happening in the kingdom of king
Walt.

Walt himself had music playing and was
watching his dancing wife. He never got enough of that, it seemed.
The queen had gotten fed up with it long ago, actually on the same
day that she had gotten her nice diamond shoes from Walt.

The seven dwarfs were working in their mines
again as usual, with no more interruptions from aforementioned
queen.

Johan, the mirror-maker was merrily making
mirrors in his shop.

"Everything its usual boring self," she
concluded. That was a good thing, as she had something pressing on
her mind. The challenge.

A challenge was a very personal thing. It was
not done to consult another witch on something like that, as that
would be unfair towards the challenging party.

Hilda took her crystal ball and sat down to
talk to her girlfriend, Baba Yaga.

"Hilly baby, what is the matter this
morning?", the cackling voice rang through the room, as the ugly
face of Baba Yaga appeared in the ball.

"I got challenged again."

"Oh dear. Same guy?" Baba Yaga looked
worried, and with reason. Lamador, king Herald's sorcerer, was
getting stronger and stronger. Each time he challenged Hilda it
became more difficult for the wicked witch to get out of it alive
and in one piece. The last challenge had almost cost Hilda her
life.

"Yup. Lamador again. And again he
specifically wrote in the note that it would be to the death. And
from the excitement in the handwriting I sense that he means
friggin' serious business this time. He wants my ass, Babs."

"Damn, girl, I wish that was all he wants.
From what I heard he's not looking bad." Baba Yaga frowned. This
was seriously bad news.

"Yeah, I know, Hilly. Sorry, but a dirty mind
is a joy forever."

Hilda could not help but chuckle over that
remark. "And you know like no one else, I am sure of that. I hope I
can call on you if there is something becoming more clear about the
challenge, Babs."

"Of course, kiddo, just get in touch and
we'll try to work something out. Maybe we can also shanghai Strega.
I know she doesn't have a problem with bending the rules slightly
concerning challenges."

Hilda felt good about that. Friends were just
great. "Thanks, girlfriend. I'll let you know."

The wicked witch got up and started pacing
through her room again. The challenge worried her, much more than
previous times.

Memories of the last one swam in front of her
eyes, in technicolor and monophonic sound. The challenge had been
set up in a labyrinth of dungeons, where black dragons, ghouls and
all kinds of crawly creepies were going round. There would be
nothing wrong with that of course, if the creatures would have
hindered Lamador as much as Hilda. She, however, had been busy
fighting off cartloads of them, while Lamador was sneaking up from
behind, through a secret passageway that he had created (very
illegal, that move had cost him four points).

It had been sheer luck that one of the black
dragons had taken a running leap and misjudged its distance to get
to Hilda. It had overshot its target, fell on the floor close to
Lamador and its bulk had slammed the sorcerer into the wall before
he could launch the fatal attack on Hilda. This had been the end of
that challenge, as there were only a few bones in Lamador's body
that had not been not broken by the surprise the black dragon had
bestowed upon him.