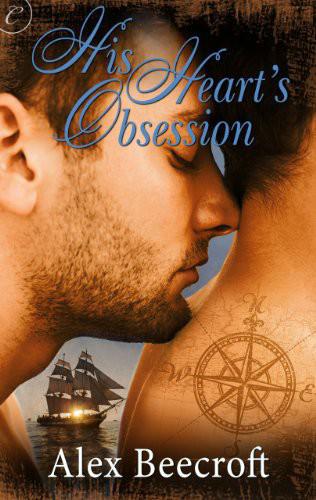 His Heart’s Obsession
By Alex Beecroft

But Hal demands proof of love before he will submit to the rakish Robert.

Mission accepted. After all, how hard could it be to show what’s inside his heart? Yet Robert’s move to claim Hal’s love leads to the threat of exposure, and mortal danger from the French. Will a heart obsessed ever accept defeat?

June is a good month for us here at Carina Press. Why? Because it’s the month we first started publishing books! This June marks our two-year anniversary of publishing books, and to celebrate, we’re featuring only return Carina Press authors throughout the month. Each author with a June release is one who has published with us previously, and who we’re thrilled to have return with another book!

Later in June, those collections are joined by a selection of genres designed to highlight the diversity of Carina Press books. Janis Susan May returns with another horror suspense novel,
Timeless Innocents,
following up her fantastic horror debut,
Lure of the Mummy.
Mystery author Jean Harrington offers up
The Monet Murders,
the next installment in her Murders By Design series
.
And the wait is over for fans of Shawn Kupfer’s debut science-fiction thriller,
47 Echo,
with the release of the sequel,
Supercritical.
Rounding out the offerings for mystery fans, W. Soliman offers up
Risky Business,
the next novel in The Hunter Files
.

Romance fans need not dismay, we have plenty more to offer you as well, starting with
The Pirate’s Lady,
a captivating fantasy romance from author Julia Knight. Coleen Kwan pens a captivating steampunk romance in
Asher’s Invention,
and fans of m/m will be invested in Alex Beecroft’s emotional historical novella
His Heart’s Obsession.

We’re proud to showcase these returning authors, and the amazing books they’ve written. We hope you’ll join us as we move into our third year of publishing, and continue to bring you stories, characters and authors you can love!

To all my fellow Royal Navy enthusiasts, particularly those with whom I met up in London to put flowers
on
Admiral Collingwood’s grave.

Thank you in particular to Wulfila and Molly for sticking with me for years, and to Erastes, Charlie and Lee for stopping me the many times I’ve been tempted to give up.

Aboard
HMS Swiftsure,
at anchor
1752

Robert Hughes stirred on his cot. They were at anchor and the night was still and quiet, or he would not have been able to hear the low murmuring of Hal’s voice from the next cabin. Tropical heat suffused the wooden womb in which he lay, made him kick off his one sheet and sit up.

He had never claimed to be a good man. Quite the opposite, he was as deep-dyed a rogue as a man could hope to meet in the British Royal Navy. So he did not hesitate to swing himself out of the narrow coffin of his bunk, land light-footed on the warm planks, and gently move aside the sea chest that lay against the canvas partition wall.

“Ah…” It was a little insinuating murmur, hot as the night, Hal’s woodwind-deep voice broken from its daylight authority and gasping, breathless and needy. “Please…”

I’m doing this for his own good.
Behind the chest, the canvas wall had been ripped, and a hole half the size of Robert’s fist stood out from the shaping battens. He had found it there six months ago and not reported it, because sometimes—like tonight—the wanting grew too much. Then he would draw the chest back and kneel here, with his face to the gap, watching Hal Morgan sleep.

It was a stolen intimacy, but those were the only kind he had so he cherished them.

Hal had a child’s fear of darkness—he slept with a lantern freshly trimmed above him. Always had, in all the five years they had served together. Indeed, it was his shadow on the white canvas—his silhouette, dark against the pale background, that moved as he moved, bending down to unbuckle shoes, drawing its shirt over its head, showing itself, slender and well shaped and unselfconscious—that had moved Robert to encourage the fraying hole.

Even now he would touch the silhouette and imagine touching Hal’s spirit or his naked skin. He dreamed about it at times—of Hal asleep in the other room, and his shadow reaching out from the wall, coming to enfold Robert and fill with tenderness all the places inside that ached when he watched it.

But it seemed Hal had his own dreams.

Scrunched up in the tight corner of his tiny room, Robert kissed the fabric, then put his eye to the hole.

Dim lantern light seemed bright to him after the darkness of his own sleep. He made out Hal’s sheet, crumpled on the floor where he had kicked it off, allowed himself to look up by careful degrees, rationing the torment and anticipation.

Hal’s hand first—held at an awkward angle where his elbow must be jammed into the raised edges of the cot. Such beautiful hands he had—expressive, mobile, clever hands, tanned and capable. Awake, they punctuated his speech with movement and emotion—exclaiming, illustrating, never still. Here, drawn in sepia by the brown light, his fingers clenched and released as though they held tight to a lover’s flesh.

Quietly, Robert reached up and touched the place on his own shoulder where Hal clung demandingly to his dream-lover. A wave of arousal, oily as despair, curled up from his balls to his throat, drying his mouth.
I should stop looking. He would knock me down if he knew.

But his gaze travelled on upwards to where he could see the curve of Hal’s throat, his head tilted back, his neck offered in submission to his lover’s mouth. Only the top of his chest was visible above the side of the bunk, the neckline of his nightshirt askew enough to show flesh as pale as his linen and sweat like a dew of gold in the lantern light.

Hal lay on his back, his legs pulled up, one resting against the hull, the other against the board of the cot. His shirt had fallen down to pool in his lap, leaving the braced lines and undefended skin of those long legs bare to Robert’s gaze. Never had a thief more cherished a stolen intimacy than Robert cherished this. He personally slept half-clothed, breeches on, to be prepared for any emergency in the night, but now he stroked a hand up his inner thigh, pretending it was Hal’s bare leg. Fumbled at the buttons of his fly, pressing now uncomfortably hard against his aching yard.

Hal’s mouth was soft, half-parted. His tongue touched his lower lip as if licking off the savour of a kiss, but his eyes were pinched closed, his brow creased as if in pain. His low whisper had grown louder, taken on a growl of frustration. Even—to the sensitive ears of a man obsessed by his moods—an edge of tears.

Not even in his dreams,
Robert thought, soothing the ache between his own legs with a practised hand,
does his imaginary lover make him happy
.
I would. I would if he would let me. I would take that invitingly open mouth and fill it with bliss. I’d worship him from that vainly offered arse to… God, how I’d fill that until he screamed.

Bloody hell, he was going to say it! Robert’s fantasy burst like a sail in a storm. Hal was dreaming, he didn’t know his voice had risen, and he was going to say it out loud.
Oh, please, William.
And God alone knew who else was listening in idly in the dead of night when there was no other source of entertainment. Boult was as close on the other side as Robert was on this, and Boult would have quite a different reaction to learning of Hal’s fantasies than Robert did.

Buttoning himself back up quickly, Robert rose stiffly from his knees, lurched out of his cabin’s sliding door. There was a light under Boult’s door—he was awake. Must be listening by now. Bloody hell. Robert crashed into the wall by Hal’s cabin, loud as he could. Then, to be sure, he made a noisy performance of rolling back the door and fell against the sword-belt hung up inside with a great jangle.

When he looked up, it was to find Hal sitting, shirt pulled down over his knees, dark eyes startled and haunted with something worse than sleep. Awake, thank God, and unincriminated. Now all that remained was for Robert to get himself out of here without casting suspicion upon himself, and at that he was infinitely practised, having been something of a prankster since before he was breeched. That time at university, for example, when he had put down turf in young Smalting’s room and filled it with sheep. That had been most amusing.

So as Hal exclaimed, “Hughes? What on earth?” Robert feigned drunkenness, grabbed for the doorjamb as if to hold himself up, and slurred, “What’re you doing in my cabin?”

The brief glimpse of Hal’s misery, flayed and tender, was whisked away, to be replaced with a more familiar irritation. He had, Robert thought, the kind of face on which anger looked as enthralling as a smile.

“You woke me up, you sot! Your cabin is next door. Idiot!”

It was something just to have that fierce regard concentrated entirely on him. Robert clung on harder and smiled. Hal’s hair had been mussed by the pillow, crushed gold. He never got a chance to see it in the daytime because of the wigs. He could stand here and look forever, and as he now had a perfectly good excuse, that was what he did.

Hal shook his head and gave a small, long-suffering smile. “You’re drunk as David’s sow, aren’t you? Did you hear any of that? Next door. Your cabin is next door.” He reached for the housecoat that lay across the foot of the bed. “Do you need me to take you?”

Oh yes. Come back to my bed with me. Let me show you what I’m really thinking. I’ll banish that phantom from you. I’ll burn it away.

But no. If the others hadn’t been listening before, they certainly were now, and this was not the place, or time. It never was. “Sorry. No. I can… Don’t need any help. Perfectly capable of bedding to my walk on my own.”

The thought weighed him down as he returned to his own humid, empty bed, spoiled his satisfaction in a rescue so neatly pulled off. It never was the time to tell Hal how he felt. When would it ever be?