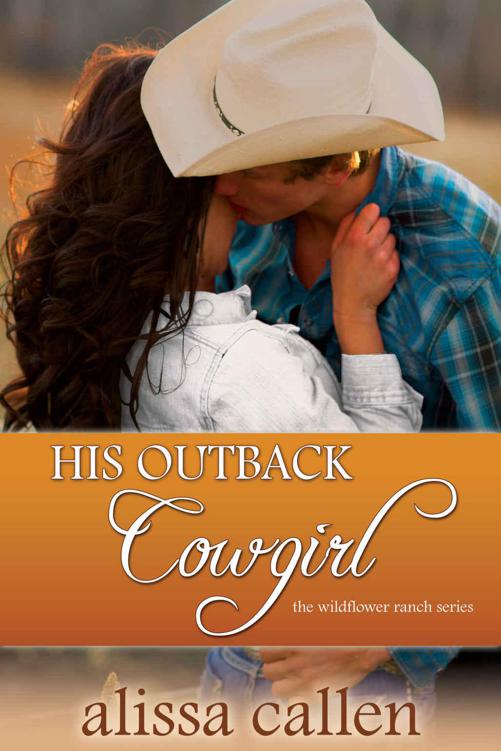 To Bryana. My picture-taking cowgirl.

“T
ell me again why I’m supposed to be this Aussie cowgirl’s babysitter for the summer?” Ethan Morgan lifted a brow and stared at his father across the kitchen table.

The timeworn creases on Henry’s face dissolved into a grin. “Because you drew the short straw.”

Ethan rubbed his chin. Bad luck had nothing to do with him being designated the job to keep Zane Nash’s half-sister out of trouble. Henry had recently had a hip replacement and had resisted Ethan leaving his Colorado Springs ranch to stay with him while he recovered. Even now, the independent old rancher took any opportunity to ditch him.

“So my keeping an eye on Bridie has nothing to do with you wanting to get rid of me?”

“Not at all.” Expression innocent, Henry fed breakfast waffle to the Australian shepherd, Rocket, who lay beside him. He then broke a smaller piece for the puppy, Milo, who chewed on Rocket’s fluffy tail. “Has anybody told you that you have a suspicious mind?”

Ethan bit back a grin. Remaining suspicious was the only way to stay a step ahead of the canny and determined man he’d discovered last fall was his biological father. “Only when it comes to you. You sent me to Marietta yesterday to run errands so you could drive the pickup, didn’t you?”

Henry grunted. “It’s been six weeks and the Doc said I could drive.”

“Technically it’s been only five and a half weeks.” Ethan sliced off a corner of warm waffle. “Shame the truck keys weren’t on the rack.”

Ethan shot Henry a quick look. His father’s tone had been a little too smug. Before he’d left for town, Ethan had rifled through the key rack to make sure he’d found all the pickup keys. Had his crafty father stashed a spare set somewhere?

“Don’t give me that look. Yes, I found some keys but no, I didn’t drive the truck.” He shook his head. “I have no idea why you and your brother think I’m always up to something?”

Ethan laughed. Henry’s aggrieved expression didn’t match the sharpness of his gaze. Henry’s body might be aging but his mind continued to be whip-smart. “Because you are. What about the time you told Cordell he had to stay with Payton at Beargrass Hills Ranch because there was no accommodation in town?”

“What about it? There was a wedding on and there was no place to stay.”

“In town there mightn’t have been any beds but you had an entire spare guest wing free here at Larkspur Ridge Ranch.”

A smile tugged at Henry’s mouth. “And look how well Cordell staying with Payton turned out ... they discovered how perfect they were for each other.”

Ethan shook his head. “Your matchmaking isn’t going to work this time. Bridie and I are incompatible. She has trouble written all over her.”

Henry’s gaze snapped to his face. “You’ve seen her?”

Ethan withheld a sigh. So much for heeding life’s lessons. A childhood full of uncertainty and fear had shaped him and his brother. Cordell may have blanked out his emotions and used his fists to protect them, but Ethan had learned to use words and silence as weapons. Now was a time when silence would have served him well. He couldn’t have Henry know how much the prospect of looking out for strong-willed Bridie unnerved him. He was supposed to be the calm and steady twin.

He concentrated on another mouthful of waffle and on keeping his expression neutral. If Henry discovered he’d taken more than a brief look at the Australian cowgirl with her snug jeans and her devil-may-care grin, having to babysit her would be the least of his worries.

With Cordell and Payton engaged, Zane and Trinity together and Rhett and Ivy soon to be married, Ethan felt the heat of being the last single cowboy standing. A situation he was in no hurry to remedy. He wouldn’t be pushed into, let alone jump into, a relationship. He’d partner up when ready, after deep consideration, and only with the right girl. He’d survived his unstable childhood by being careful, cautious and wary. He wasn’t about to follow in Cordell’s risk-taking footsteps, even if they had led him to beautiful Payton.

“What was she like? You can spot a poorly heifer a hundred yards away so don’t tell me you didn’t notice a stranger with an accent?”

Ethan chewed slowly before he answered. “She plays a mean game of pool, and I wouldn’t want to cross her. Nick Ryan got a little too up-close-and-personal when he gave her some pool tips. He’ll have a bruise for a week where her elbow connected with his ribs.”

Henry fed Rocket another piece of waffle. “She takes after her grandmother then. Daisy Ashton was full of pluck and a woman you’d not want mad at you.” Henry cast him a quick look. “Does Bridie have the Ashton blue eyes and dark hair?”

Ethan finished his mouthful. He had no idea what color Bridie’s eyes were but the image of her long, night-dark hair that had fallen down her slender back to the sweet curve of her waist had stayed with him long after he’d closed his eyes.

Henry grunted again. “Then she not only has her grandmother’s spirit but also her looks.”

Ethan finished his waffle and drained his coffee mug. This conversation needed to end. He had ranch chores to do before Henry decided he wanted to help out. He’d also already wasted too much time last night watching Bridie and all the cowboys who’d made a beeline for her. There was something about her quick smile, her restless energy and the angle of her small chin that put him on edge. As much as he loved his act-now-talk-later twin and would watch his back, Ethan knew a woman who possessed the same willfulness wasn’t for him. No matter how well she filled out her faded jeans and green western shirt.

He came to his feet. “That’s great Zane’s sister has her grandmother’s spirit because I’m sure the last thing she’ll want is a babysitter. She’ll be more than capable of looking after herself while she explores. So short straw or not, you’re not getting rid of me yet.”

Instead of answering him, Henry turned his good ear toward the oversize kitchen window beside them. The clear glass provided a framed view of the scenic drive through the rolling foothills into Larkspur Ridge Ranch. A white pickup navigated its way toward the ranch house.

Henry grinned. “That’s Zane’s pickup. If I was a betting man, I’d say it was his sister behind the wheel.”

Ethan’s fingers tightened around his coffee cup. He had no doubt it was the Australian cowgirl driving. Whenever Zane visited, the truck’s wheels didn’t kick up such a thick plume of pale dust. For a road Bridie didn’t know, she sure drove fast.

Gravel crunched beneath tires as the truck approached, slowed and then parked beneath a cottonwood tree. Rocket leapt to his feet and sped out the kitchen doorway. Milo yipped and followed, his small paws sliding on the polished floorboards. Henry made no effort to stand. Instead he stared through the window as Bridie left the truck, shut the door and strode toward the ranch house.

The summer breeze caught in the loose fall of her dark hair and she lifted an impatient hand to drag the glossy strands off her face. Bridie was dressed in fitted denim and a pale pink shirt, and every sure stride showcased her lithe curves and the energy that shrouded her. Ethan swallowed.

Beautiful and spirited, this woman would lead from the front foot and embrace all that life offered. Just like his brother, she’d be a risk taker and live dangerously. A strange sense of loss slipped through Ethan. She wasn’t the type of girl who’d fall for a boring and reliable rancher.

A smile shaped Henry’s lips. “Yep. She’s an Ashton all right.” He made no effort to stand. Expression deadpan, he looked at Ethan. “Off you go. Go and greet her. You know the Doc said I’m to take it easy. It’s a long walk to the front door.”

Ethan settled for an exasperated eye roll. Even when just home from hospital, Henry hadn’t taken it easy. Ethan placed his mug and plate on the bench and at the kitchen doorway turned to waggle a finger at his father.

“You had better be sitting there when I get back. No truck driving until next Thursday.”

Henry scowled but not before Ethan caught a glimmer of laughter in his eyes.

The doorbell rang, triggering a chorus of excited barks. Rocket’s deep woof was interspersed by Milo’s higher pitched yip. Ethan made his way down the long hallway. His gut told him Zane’s sister’s outback home would ice over before she’d allow herself to be babysat. He rolled his shoulders to disperse the sharp bite of tension. There was no cause for alarm. He’d only have stubborn Henry to watch over. He wouldn’t be spending the summer keeping a headstrong and gorgeous cowgirl out of trouble.

B
ridie Willis dragged in a long breath and quelled her impatience. Behind the wooden door in front of her she could hear dogs barking. If the dogs were inside, somebody was home. A mountain breeze swirled around her and brought with it the promise of rain. She briefly closed her eyes. In Australia, where rain was scarce, such a scent carried with it both hope and happiness.

Rough Justice by Andrew Klavan
The Merlin Conspiracy by Diana Wynne Jones
No Place to Run by Maya Banks
Iris and Ruby by Rosie Thomas
Dance Away, Danger by Bourne, Alexa
Witch Is When the Bubble Burst by Adele Abbott
The Masque of Africa by V.S. Naipaul
Texas OilMan's Bride (Mail Order Bride Series) by Susan Leigh Carlton
Fonduing Fathers by Julie Hyzy
Defying the Odds by Kele Moon
Our partner