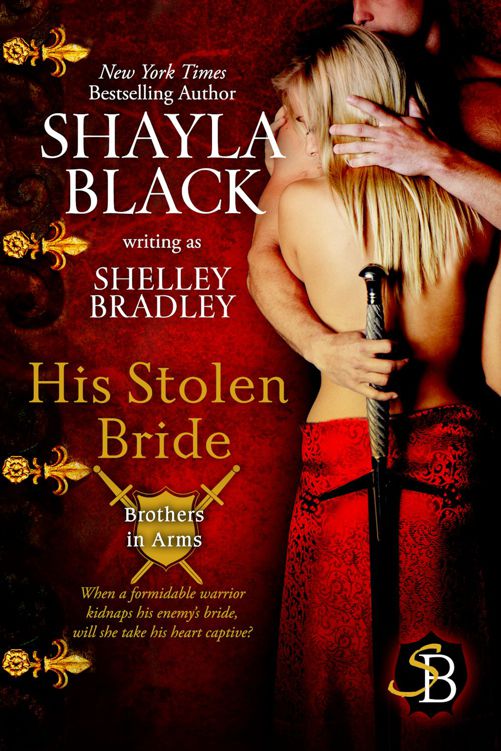 The characters and events portrayed in this book are fictional. Any similarity to
real person, living or dead, is purely coincidental and not intended by the author

All rights reserved. No part of this book may be reproduced in any form by an electronic
or mechanical means—except for brief quotations embedded in critical articles or reviews—without
express written permission.

eBooks are not transferable. They cannot be sold, shared or given away, as it is an
infringement on the copyright of this work.

His Rebel Bride, Book 3, Brothers in Arms by Shayla Black

An excerpt from His to Take by Shayla Black

An excerpt from Saving My Submission by Jenna Jacob

Links to My Other Books

Dawn hid stubbornly behind Yorkshire’s scarred hills, refusing to shed her light on
the vicious scene below. Fires crackled as they blazed the surrounding cottages, illuminating
the dark with an orange glow of dust and fog clinging to the pungent earth. The exhalations
of war horses and their riders created a poof of ghostly figures in the eerie dark
as the air churned with bloodlust and greed.

Cursing his treacherous Campbell enemies, Drake MacDougall turned to counter a challenge
from one of his foes, his boots crunching on craggy earth. Arms tense from the long
battle, he managed to wield his
claidmor
with a powerful swing, slicing through the morn’s thick fog—and his foe’s middle.
Pulling his blade from the dead man’s side with a desperate yank, Drake whirled to
another sound, conscious of the metallic tinge of blood in the crisp, cloudy wind.

An ax headed straight for his chest, and he could not counter in time. Before he could
say his prayers, the man slumped forward, a thick lance protruding from his back.
His brother in arms, Aric Neville, emerged from the melee, through the dense air,
to claim his weapon from the fallen soldier. Known through all of England as the White
Lion for his ferocity in battle and loyalty to the Yorkist cause, Aric was a good
knight to have at one’s back.

Drake turned to his friend with a smile of thanks. Aric did not return his smile but
stared with bleak eyes, somehow aching and flat at once.

Then a Campbell charged from Aric’s side. Drake tensed. Aric diffused the challenge
simply, nearly cutting the man in two, with a swing of his mighty arm. The soldier’s
dying groan hung in the air between them.

“Watch yourself, friend,” Aric said, pushing the long strands of his tawny hair from
his sweat-streaked face, then disappeared down the hill, beyond the eerie orange light.

Where had the smiling friend of his childhood gone? Had the years of politics and
power as the only nephew of Warwick the Kingmaker been so unhappy? Had the recent
deaths of England’s princes so afflicted his heart?

Shaking the thought away, Drake met the challenge of an oncoming Campbell with an
arc of his sword, rending the vulnerable flesh between the joints of his armor. The
man clutched his useless, hanging arm and fell to the ground with an agonized groan.

Damn it, he hated the MacDougalls’ feud with the Campbells, which had endured for
generations. But the Campbells felt trapped between the highland MacDougalls to the
north and Drake’s grandfather, Guilford, Earl of Rothgate, to the south.

When Guilford Locke’s fatally spoiled daughter, Diera, had wed the powerful chief
Lochlan MacDougall, uniting the families, the Campbells had taken the union as a sign
of aggression. The fighting had commenced. Drake knew his father, Lochlan, regretted
the marriage for more reasons than this incessant warring, but both would stand and
fight—Lochlan out of duty and Drake out of affection for his grandfather—assisting
old Guilford’s sentries until the Campbell threat was removed.

With a
whoosh
of his broadsword and a whoop of excitement, Kieran, Drake’s other brother in arms,
leapt to his side, blue eyes full of mischief.

Drake smiled back, knowing better than to chastise his adventurous comrade. “How fare
you?”

“The battle is near finished and no one has killed me yet. That makes for a good morn.
And you?”

Drake sighed. “Ready to end this bloody farce with the Campbells.”

Seeing a foe charging across the field, Drake tossed down his
claidmor
, then retrieved the longbow from his back. He fired, felling the man. Beside him,
Kieran repeated the process when another man behind the first approached.

“Killing is never fun.” Drake couldn’t help the harsh note that crept into his voice.

“Battle is the stuff of men and life,” Kieran protested.

“Aye, but not of amusement. Do you find nothing else pleasurable these days?”

With a rogue’s grin, Kieran replied, “How well you have forgotten me since I last
saw you.”

“’Tis right you are.” Drake grinned, despite his disapproval of Kieran’s notions.
“You always enjoy a good wench.”

Shaking his head, Drake retrieved his sword and whirled away to discover another attacking
Campbell. Kieran leapt in front of him and severed the warrior’s head from his body.

Drake turned away, hoping the spirited fool wouldn’t get himself killed.

At the top of the rise, Drake spotted his father. Lochlan took a minor blow to the
leg from an opponent. Racing up the incline to his sire, Drake exhaled in relief when
his father seemed to right himself, his broad silhouette standing proud against the
orange-black sky. A man wearing his father’s colors arrived to help dispense of the
Campbell.

As the lowlander’s body fell to the damp earth, Drake’s father nodded, his expression
one of concern. Drake nodded in return.

The sentry beside his father turned toward Drake. The dark-haired man was not one
he recognized in the orange light. As the soldier spotted Drake, the man’s gray eyes
widened. With surprise? Apprehension? The stranger whirled about suddenly.

And plunged his bloody knife into Lochlan’s heart.

With a cry, Drake raced to his sire as he fell to the ground. The unknown attacker
fled over the hill, into the waiting blackness. Drake wanted to give chase, slay the
bastard. But he looked at his father’s grasping at his chest, struggling for air.
Disbelief tearing through him, Drake dropped to his knees at Lochlan’s side and placed
his trembling hands over his father’s jagged red gash settling around the deadly blade.

Panic welled inside him. The wound was deep, the area a vulnerable one. Blood seeped
around his fingers, hot, sticky.

Around him rose the cheers of Guilford’s men.

The battle had ended in victory, but Drake could only stare at Lochlan in horror.

“You will do well…as chief.” He coughed.

Chief? Nay!
“Do not leave me. We will find some way to heal you.”

Drake heard the desperation in his voice. Cold panic rushed through his veins. His
father could not die! He had no wish to replace Lochlan as chief—or usurp his older
half brother, Murdoch, to the claim.

Gritting his teeth, Drake knew the blade must be removed or his father would die.
With a grimace and a pounding heart, he withdrew the knife from his father’s flesh
with one hand and pressed the other tightly against the seeping wound.

“Do not talk like the dead. Who loyal to the MacDougalls would plunge his blade into
you?” he shouted. “Who?”

“Not mine.” His father’s voice was fading.

“Stay with me! Don’t let the damn Campbells defeat you.”

“No’ the Campbells…” he gasped.

Lochlan coughed, then fell limp at Drake’s side.

“Nay!” Drake shouted to the heavens. But his father’s chest no longer moved with life’s
breath. Clutching the weapon of his father’s demise, he could still scarce believe
that his beloved father had been murdered before his very eyes.

And by one of his half brother’s men.

Drake cursed the sibling he had always hated, but never more than now. ’Twas no matter
of questioning why Murdoch had resorted to murder. Drake knew. His half brother sought
power and wealth, both of which their father had been set to deny him as punishment
for his misdeeds.

Somehow, someway, he would avenge their father’s murder. Drake vowed to repay Murdoch’s
evil in kind, no matter the cost.

Footsteps rushed toward Drake. He restrained an urge to hide his father’s body from
prying eyes. God, how he wanted to go back in time even five minutes, keep his father
safe from Murdoch’s perfidy.

Gasps and curses lit the air around him. His father’s most trusted soldier, Duff,
knelt beside Lochlan’s fallen figure, shock transforming his face.

Then he saw the bloodied knife in Drake’s hand.

Duff leapt to his feet, fury and betrayal spearing him like a lance.

“Traitor! Murderer!” the man yelled as he scooped up the knife and held it up before
the gathering crowd.

“Nay, Duff,” Drake protested. “I but saw him stabbed and rushed to give aid.”

“By whom? Where is this fiend?” Disbelief rang from the familiar voice of Wallace,
another of his father’s castle guards—and one of Murdoch’s allies.

“Gone. Ran over the hill.” Drake pointed. “But perhaps you knew that.”

Wallace looked affronted. Drake wasn’t certain if he should believe the hard soldier’s
seeming affront, could not decipher it among the shock and bewilderment swirling inside
him.

“What would I know of yer misdeeds?”

“The misdeed was Murdoch’s. My father recognized the man as one of that terrible knave’s,”
Drake protested, unable to believe the spiraling horror of the moment. How could they
believe he had killed his own father?

None of his clansmen would meet his eye. Guilford’s men only stood by with a shake
of their head.

Nay, this could not be happening.

Aric emerged at the fore, tall and sturdy, looking as powerful as the lion for which
he was named. “Drake is innocent. His love for his sire is well known by you all.”

Duff and Wallace both shouldered in to grab Drake’s arms and roughly pull him to his
feet. He resisted, only to feel Duff’s blade at his throat.

A hush befell the crowd. All looked up into the firm, age-hardened features of his
grandfather, Guilford, Earl of Rothgate. “Release him. Drake murdered no one, least
of all his own father.”

Never my own father!
he wanted to shout.

“My lord, he lay near the body wi’ the bloody knife betwixt his fingers and claimed
a stranger killed his faither,” said Duff. “The Clan MacDougall must judge him now,
for I amna believing any tale of a murderin’ stranger.”

“I swear it,” Drake vowed. “I will swear it upon my father’s grave.”

It pained him to think of his father slain, of having a cold resting place within
the earth, but Duff inched his blade closer to his throat with a curse. His thoughts
turned to survival.

“Ye can swear it upon yer own grave,” said Duff, “after Murdoch finishes wi’ ye.”

Drake crept along the middle bailey wall of Dunollie Castle like an intruder, inching
toward the keep he had once called home. Cold anticipation settled into his gut as
he spotted the kirk’s elaborate spire through the early-morning shadows, then crept
into the building.