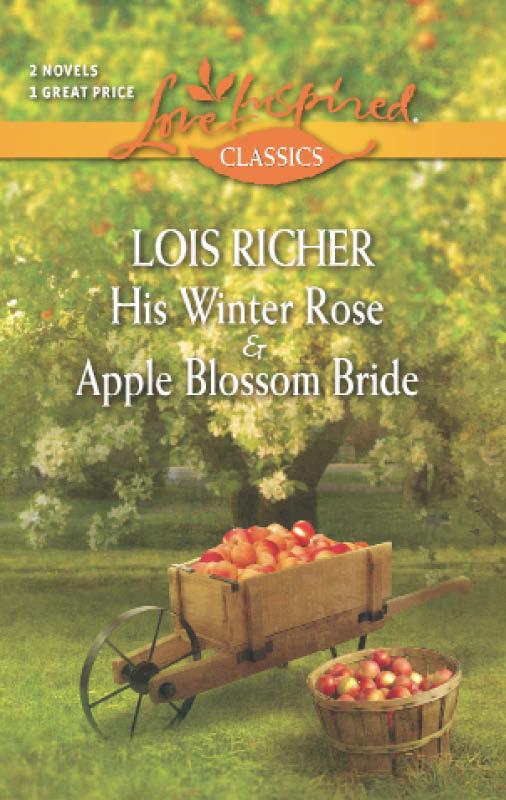 Piper Langley knows that she’s just the woman to bring sleepy Serenity Bay back to life. But her impossible boss, Mayor Jason Franklin, isn’t fully convinced. Will Piper’s dream job quickly become the stuff of nightmares...or does God have other plans for her and Jason?

Ashley Adams’s high school sweetheart was always the one who got away. Seeing Michael Masters again after decades made her teenage feelings rush back in an instant. But time doesn’t always heal all wounds—not for Ash or for a hurting single dad. Only true faith can dispel the pain of the past....

Praise for Lois Richer and her novels

“Richer portrays the struggles of her flawed but redeemable characters realistically in this sweet story.”
—
RT Book Reviews
on
A Doctor’s Vow

“These two warm stories depict love, life and how not only nature can have new growth in the spring.”
—
RT Book Reviews
on
Easter Promises

“This installment is a wonderful, emotionally heartwarming story about loss and love.”
—
RT Book Reviews
on
Twice Upon a Time

“Richer’s warm, strongly spiritual story has a hero and heroine both struggling to hear from God and discover His path for their future.”
—
RT Book Reviews
on
Rocky Mountain Legacy

A Time to Protect
**
Secrets of the Rose
**
Silent
Enemy
**
Identity: Undercover

*
If Wishes Were
Weddings
†Blessings in Disguise
**
Finders
Inc.
††Serenity Bay
§Pennies from Heaven
§§Weddings by
Woodwards
‡Love for All Seasons
‡‡Healing Hearts

began her travels the day she read her first book and
realized that fiction provided an extraordinary adventure. Creating that
adventure for others became her obsession. With millions of books in print, Lois
continues to enjoy creating stories of joy and hope. She and her husband love to
travel, which makes it easy to find the perfect setting for her next story. Lois
would love to hear from you via
www.loisricher.com
,
[email protected]
or on Facebook.

So whenever you speak, or whatever you do, remember that you
will be judged by the law of love, the law that set you free. For there will be
no mercy for you if you have not been merciful to others. But if you have been
merciful, then God’s mercy toward you will win out over his judgment against
you.
—James
2:12–13

This book is for Judy, Ken and the kids.
Thanks for introducing me to cottage country.

Maybe it was the suit that took his breath away—a tailored red power suit that fit her like a glove. But he didn’t think of power when he looked at her. He thought of long-stemmed red roses—the kind a man chooses to give his love.

Maybe it was the way she so regally rose from the chair in Serenity Bay’s town office and stepped forward to grasp his hand firmly. Or it could have been her hair—a curling, glossy mane that cascaded down her back like a river of dark chocolate.

His sudden lack of oxygen wasn’t helped by the megawatt smile that tilted her lips, lit up her chocolate-brown eyes and begged him to trust her.

From somewhere inside him a warning voice reminded, “Trust has to be earned.” Immediately he recalled a verse he’d read this morning: Commit everything you do to the Lord. Trust Him to help you and He will.

“I’m Piper.” Her words, firm, businesslike, drew him back to reality.

“Jason Franklin,” he stated. “Would you like to come through to the boardroom?”

“Certainly.” She followed him, her high heels clicking on the tile floor in a rhythmic pattern that bespoke her confidence.

Inside, Jason introduced the town’s councillors, and waited till she was seated. Only then did he take his place at the table and pick up her résumé. It was good. Too good.

“Your credentials speak very well for you, Ms. Langley.”

He hadn’t been paying her a compliment, simply telling the truth. She was overqualified for a little town like Serenity Bay, a place in Ontario’s northern cottage country.

“I don’t think we have any questions about your skills or your ability to achieve results.” He glanced at the other board members for confirmation and realized all eyes were focused on the small, delicate woman seated at the end of the table.

Piper Langley had done nothing and yet they all seemed captivated by her. Himself included.

“I’m happy to answer anything you wish to ask, Mr. Franklin.” She picked an invisible bit of lint from her skirt, folded her hands in her lap and waited. When no one spoke, she chuckled, breaking the silence. “I’m sure you didn’t ask me here just to look at me.”

So she knew she drew attention. Was that good or bad?

“No, we didn’t.” He closed the folder filled with her accomplishments, set it aside. “It’s obvious you have what we’re looking for, but I can’t help wondering–why do you want to leave Calgary? Especially now, after you’ve worked so hard to build your reputation, finally achieved the success you’ve earned? Why leave all that to work in Serenity Bay?”

She didn’t move a muscle. Her smile didn’t flicker. But something changed. If he had to put a name to it, Jason would have said Piper-the-rose grew prickly thorns.

“Several reasons, actually. As you noted, I’ve been working in the corporate world for some time now. I’m interested in a change.”

That he understood. He’d come here to seek his own change.

“I was intrigued when I heard about your plans for Serenity Bay. The town has always been a tourist spot for summer vacationers.”

“Lately the year-round population has been in decline,” he admitted.

“Yes.” Her gaze narrowed a fraction. “If I understood your ad correctly, you’re hoping to change that.” She glanced around the table, meeting every interested stare. “I’d like very much to be a part of that process.”

Nice, but not really an answer to his question.

Why here? Why now?

Jason leaned back in his chair and began to dig for what he really wanted to know.

“How do you view this town, Ms. Langley?”

“Please call me Piper.” She, too, leaned back, but her stare never wavered from his. “I don’t want to hurt anyone’s feelings, but to me Serenity Bay looks like a tired old lady much in need of a makeover. The assets are certainly here, but they’re covered by years of wear and tear. I’d like to see her restored to a vibrant woman embracing life with open arms. I have some ideas as to how we might go about that.”

Piper elaborated with confidence. Clearly she’d done her research, weighed every option and planned an all-out assault on the problems besieging the Bay. But she didn’t stop there. She offered a plethora of possibilities Jason hadn’t even considered. Two minutes into her speech she had the board eating out of her perfectly manicured hand. None of the other candidates had been so generous in sharing their ideas.

Jason was left to find a hole in her carefully prepared responses.

“You’re used to large budgets, Ms. Langley. You won’t have that here.”

Her brown eyes sparked, her perfectly tinted lips pinched together as she leaned forward. So Miss Perfect had a temper. He found that oddly reassuring.

“Money isn’t always the answer, Mr. Franklin.” Her fingers splayed across the shiny tabletop, her voice deepened into a firmness that emphasized the sense of power that red suit radiated. “Yes, it will take some cash to initiate change. It will also require hard work, forward thinking, a vision that reaches beyond the usual means to something new, untried. There will be failures, but there will also be successes.”

She stared at him hard, her focus unrelenting, searching. Then she nodded, just once.

“It will also take commitment. By you, your board, the community. No town gains a reputation for great tourism through one person’s actions. It takes everyone committing to a common goal and pushing toward it—no matter what. It takes teamwork.”

Jason hoped his face remained an expressionless mask, but his heart beat a hundred miles an hour. Of everything she’d said, that one word had made up his mind.

It was what he’d been cheated of before.

It was the one thing he’d demand from the town’s newest employee.

“Unless anyone has another question, or you have something more to say, Ms. Langley, I believe we’re finished. Thank you for making the trip.” He rose, surprised to see more than an hour had passed. “We will notify you of our decision by next week.”

“It’s been my pleasure.” She worked her way around the table, shaking hands, flashing that movie-star smile. “Regardless of whom you chose as your new economic development officer, I wish you much success in your endeavor. I look forward to coming back in the summer to see the changes you’ve wrought.”

Jason ushered her out of the room, back into the reception area.

“Thank you again,” he said, holding out his hand toward her. “You’ve obviously put a lot of thought into how you’d do the job, Ms. Langley. We appreciate your interest.”

“It’s Piper,” she murmured, shaking his hand. “And the pleasure was all mine. It’s been good to see the town again.” She picked up a long, white cashmere coat and before he could help she’d wrapped it around herself, fastened the two pearl buttons in front.

He got stuck on that thought, gazing at her ivory face rising out of the petal-soft cashmere.

“It’s Jason,” he told her automatically.

“Very well, Jason.” She inclined her head, flicked the sheath of sable-toned hair over one shoulder, shook his hand in finality. “Thank you for the opportunity. Goodbye.” Then she turned toward the door.

Jason kept watch as she strode to her car, a grey import rental. He waited until she’d climbed inside, until the quiet motor glided away from the town office.

She was wrong about one thing.

It wasn’t goodbye. He knew that for sure.

The Devil's Fate by Massimo Russo
Can't Stop Believing (HARMONY) by Thomas, Jodi
A Nearer Moon by Melanie Crowder
THE TORTURED by DUMM, R U, R. U. DUMM
Moonlight in the Morning by Jude Deveraux
Under the Influence by Joyce Maynard
Happy Ever After by Nora Roberts
Milk and Honey by Faye Kellerman
Mass Casualties: A Young Medic's True Story of Death, Deception, and Dishonor in Iraq by Michael Anthony
Ellery Queen Mystery Magazine 03/01/11 by Dell Magazines
Our partner